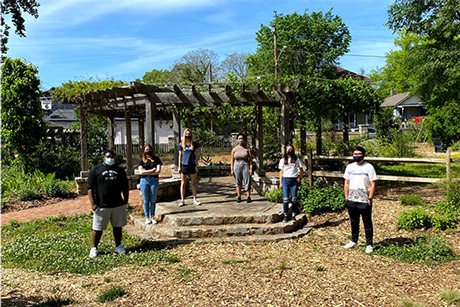 With a seed gift from the Kenneth Cole Foundation in 2002, Emory launched the CBSC program, which soon became a national model for integrating research and classroom learning with community engagement.

Zeroing in on a mosquito menace

Emory scientists tap big data to target a tiny predator and the viral diseases it spreads, including dengue fever and Zika.

The forced experiment of remote learning served as a prime opportunity for Emory faculty to rethink and retool their teaching. Technology improved the experience, but faculty and students agree that an in-person, experiential education is difficult to replace.

Emory faculty and staff are frequently recognized for their work locally, nationally and internationally. Read a sampling of recent accolades, including awards for professional contributions and leadership appointments.

Abdallah Al-Obaidi and his family fled violence in Iraq, eventually coming to the U.S. as refugees. He became a citizen during his sophomore year at Emory and is now headed to medical school as a way to give back.

A $1 million gift to Candler School of Theology will establish an endowment supporting a permanently funded postdoctoral fellowship in Jain studies, which will advance Candler’s growing work in interfaith education for Christian leaders.

Goizueta Business School partners with the LGBTQ Institute on survey

The way forward: Preparing for the next pandemic

Mapped: The future of the School of Medicine's Class of 2021