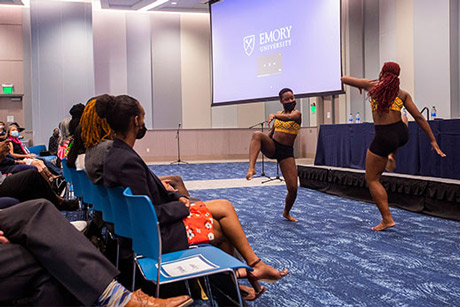 Emory’s “In the Wake of Slavery and Dispossession” symposium educated attendees on the university’s history and inspired a stronger sense of community, challenging external and internalized racism.

With Merck’s findings that Emory-discovered molnupiravir may significantly reduce the risk of hospitalization or death from COVID-19, Emory President Gregory L. Fenves joins epidemiologist Jodie Guest in a conversation about Emory’s history of research innovation.

Ilya Nemenman was instrumental in Emory becoming a global leader in theoretical and modeling approaches to living systems. Now he has received one of the most prestigious recognitions for theoretical scientists in the prime of their research careers.

Oxford College of Emory University has renamed Language Hall after Judge Horace J. Johnson Jr., an alumnus who became the first Black Superior Court judge in the Alcovy Judicial Circuit, and established a scholarship endowment in his honor.

Answering questions about pregnancy and COVID-19

Emory University has named Audrey Chang as the inaugural director of Science Gallery Atlanta, an innovative and immersive venue for science and art collaboration that will open its doors to the public early next year.

Emory anthropologist Dietrich Stout decodes the brain's 'alphabet' and 'grammar' for action to study behavioral evolution and measure the complexity of human technologies based on the making and use of different types of Stone Age tools.

Emory will celebrate Homecoming Oct. 16-24 with a full schedule of on-campus festivities. The week also includes a 2O36 kickoff event on Friday, Oct. 22, and the return of the Homecoming parade and festival on Saturday, Oct. 23.

October is Breast Cancer Awareness Month. Emory epidemiologist Lauren McCullough investigates why outcomes for Black women with breast cancer are so much worse than their white counterparts in Georgia.

We accidentally solved the flu. Now what?

What the future may hold for the coronavirus and us