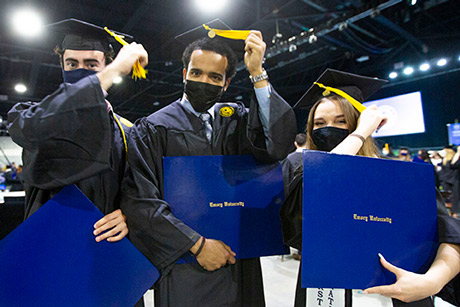 Celebrating the Class of 2021

Emory Emergency Medical Services, the first licensed collegiate medical first responder service in the state of Georgia, was suspended as a COVID-19 precaution and is now being reinstated.

In 1959, Emory’s School of Medicine rejected applicant Marion Hood because of his race. Hood, who went on to a distinguished career as a doctor, will share his story of resilience in a virtual event June 17.

Historian and documentary film producer Malinda Maynor Lowery will be the second Cahoon Family Professor in American History. A member of the Lumbee Tribe, Lowery has focused much of her work on questions of Native culture, identity and migration.

From equal rights to voting rights, from health care to the environment, the causes that Emory students align themselves with are as diverse as the students themselves. Get to know a few graduate and professional students making a difference on campus and beyond.

A new study published by Emory psychologists identifies a novel biomarker indicating resilience to chronic stress. This biomarker is largely absent in people suffering from major depressive disorder, and this absence is further associated with pessimism in daily life, the study finds.

Libraries reopen for fall with new safety-focused options in place

Mapped: The future of the School of Medicine's Class of 2021