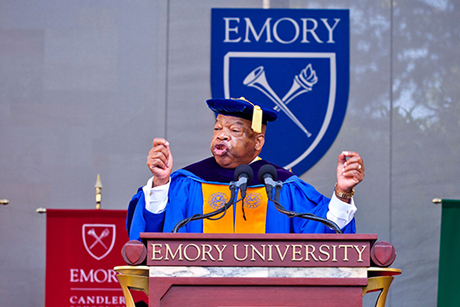 Emory lost one of its dearest friends and fiercest inspirations with the passing of civil rights luminary and longtime U.S. Rep. John Lewis. As an activist, member of Congress and Emory Commencement speaker, Lewis forged strong connections with the university.

A new study from the lab of Emory professor of biology Jaap de Roode confirms that while the eastern and western butterflies fly differently, they are genetically the same.

Marsteller’s legacy of masterful mentorship, advocacy in the sciences continues

Patricia Marsteller, who retires Aug. 1, has been a fierce and early advocate of programs to encourage undergraduate science research and study, especially for students who are underrepresented in STEM fields.

Emory statement on the death of Rep. John Lewis

Deeply saddened by the passing of Congressman John Lewis, Emory joins Atlanta and the rest of the country in mourning the loss of a remarkable leader and friend.

Emory Libraries and the Emory community are mourning the passing on Friday (July 17) of Rev. C.T. Vivian, 95, a civil rights leader who worked alongside Martin Luther King Jr. and spent his life speaking out for equality for African Americans.

Faculty at Emory’s Candler School of Theology were integral to compiling a guide outlining how congregations can eventually move forward with in-person worship — but do so safely. The guide is available in both English and Spanish.

Research is an integral part of Emory, from the sciences to the humanities. Here’s a sample of recent grant awards across campus along with newly published research findings.

From video games to movies, course underlines classical stories playing out on our screens

Emory, other universities urge court to allow consideration of race in admissions