Emory University Hospital's treatment of the first patients with Ebola virus disease in the United States drew international media attention and was by far the biggest story in the Emory News Center this year. Articles about students, rankings and research round out the top 14 stories of 2014. 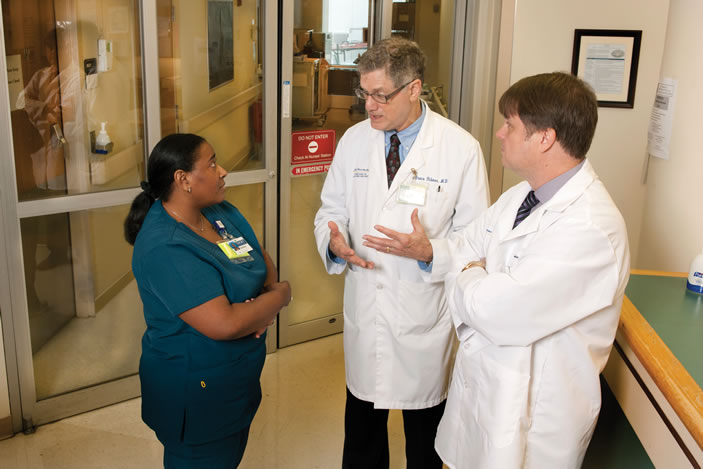 In August 2014, Emory University Hospital became the first hospital in the United States to treat patients with Ebola virus disease. As Emory continued to care for Ebola patients throughout the fall, Emory experts shared what they learned with healthcare providers around the world through an extensive website, journal publications and consultations.

Erika Hayes James was appointed dean of the university's Goizueta Business School, assuming her new role July 15. She came to Emory from the Darden Graduate School of Business Administration at the University of Virginia.

As an Emory student, alumnus, staff member, administrator and benefactor, William H. Fox Jr. forged a significant legacy during his 43-year association with the university. He passed away April 11, 2014.

In an annual ritual, graduating Emory medical students gathered on campus for the moment when they would discover where they would train as residents.

Emory College student entrepreneur Kaeya Majmundar survived a swim in the "Shark Tank," leaving the television show with funding to help take the next steps with her BZbox invention.

9. Next steps for light rail in the Clifton Corridor

Two public meetings in December were among the next steps in a multi-year effort to bring light rail transit to the Clifton corridor, including stops convenient to the Emory campus, Emory University Hospital and the CDC.

With a voice that thundered across a sea of graduates, civil rights icon and U.S. Rep. John Lewis (D-Ga.) exhorted Emory's Class of 2014 to "be bold, be courageous, stand up and speak out."

Located at Emory's Briarcliff Road property, the Emory-Georgia Tech Library Service Center will house a shared collection of materials available to students, faculty and staff of both institutions.

An Emory math breakthrough, "Mother Lode of Mathematical Identities," made it to the final two in voting for Discover Magazine's "People's Choice" for top science story of 2014. Final voting concludes Dec. 24.

The seed of an idea for an organic farm at Oxford College took root this year as Oxford’s first organic farmer transformed a grassy field into a thriving, colorful patchwork of crops and a living laboratory for students.