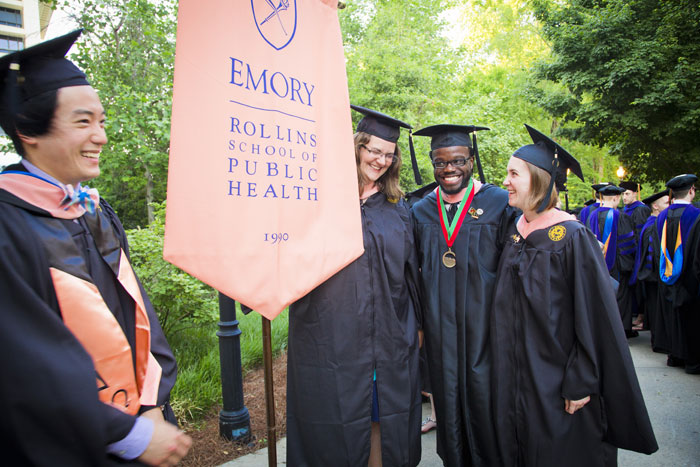 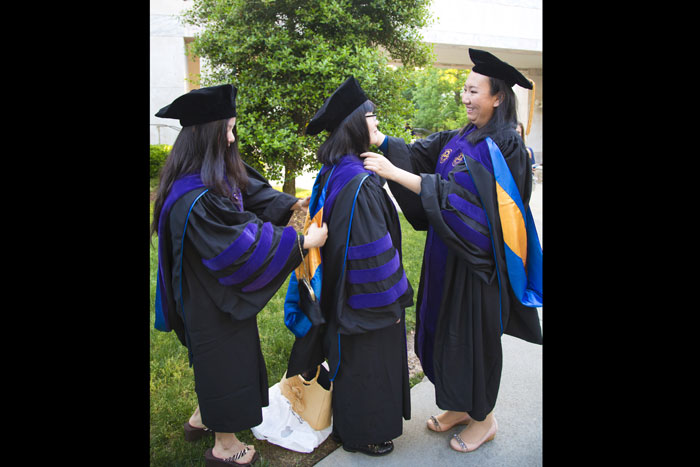 This commencement was Emory's greenest ever. For the first time, all undergraduate graduation gowns and some professional doctoral gowns were made out of recycled plastic bottles. School of Law graduates (from left) Emily Yu, Ningrun Tang and Lina Ju. 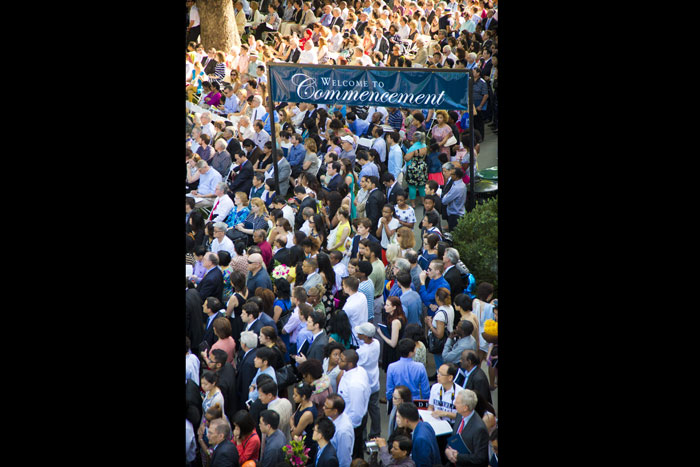 Some 15,000 graduates and visitors gathered on Emory's quadrangle on May 12, 2014, for the main commencement ceremony. 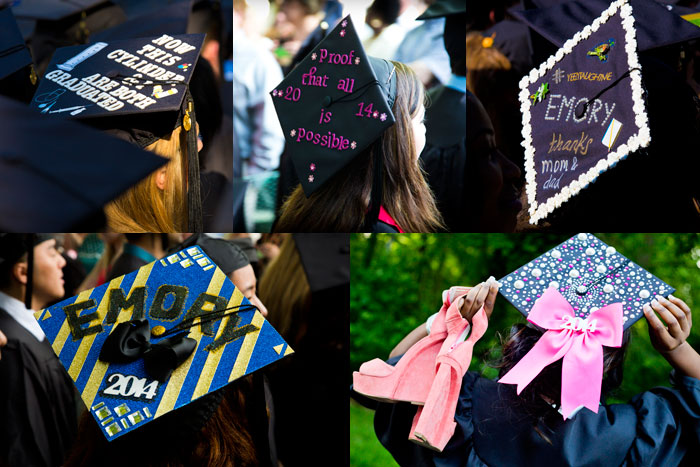 Nearly 4,000 graduates gathered on the Emory Quadrangle on a clear, sunny morning for a day of celebration and completion. 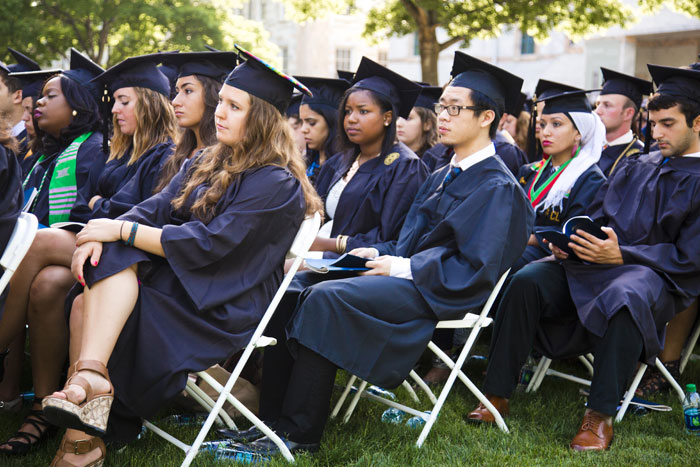 Emory's Class of 2014 represents nearly every state and many nations around the world — some 16 percent are international students — and includes decorated veterans, award-winning student-athletes and graduates over the age of 50. 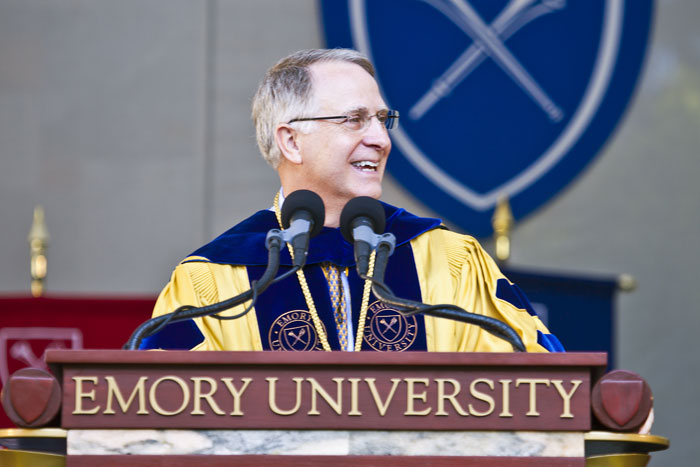 President James Wagner congratulated Emory’s newest alumni for embracing an education "steeped in the ancient traditions and contemporary relevance of the liberal arts." 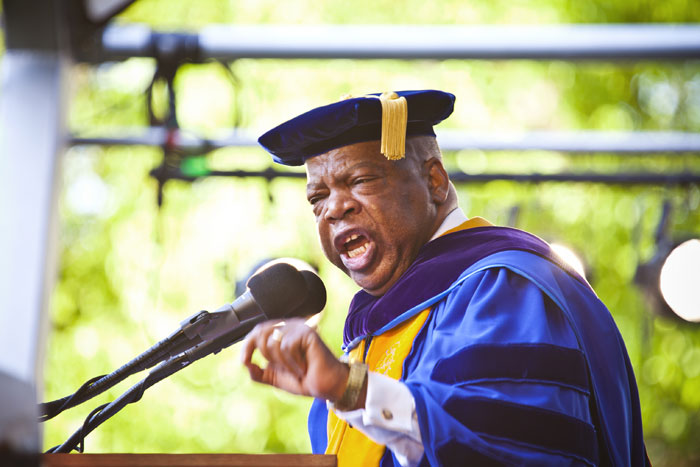 Civil rights icon and U.S. Rep. John Lewis (D-Ga.) exhorted Emory’s Class of 2014 to "be bold, be courageous, stand up and speak out" during his keynote address. 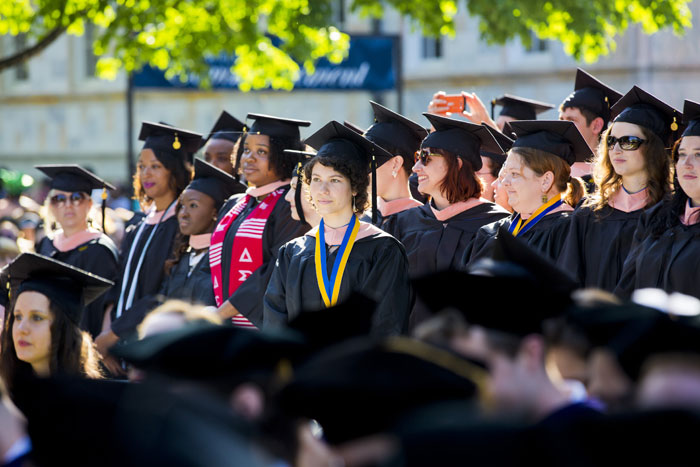 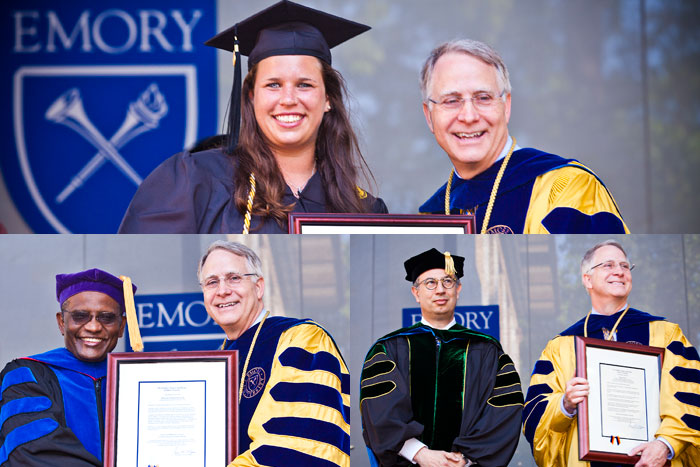 Emory's campus services staff and volunteers set up 14,000 chairs on the Quad in preparation for spring commencement. This video shows the setup with aerial and time lapse footage.

With a voice that thundered across a sea of graduates, civil rights icon and U.S. Rep. John Lewis (D-Ga.) exhorted Emory’s Class of 2014 to "be bold, be courageous, stand up and speak out" during his keynote address at the University’s 169th Commencement ceremony on Monday, May 12.

Lewis’ impassioned call to action was received with cheers by the Class of 2014, nearly 4,000 graduates who gathered on the Emory Quadrangle on a clear, sunny morning for a day of celebration and completion, as they prepare to step out into a world of new possibilities.

For Nicholas Green, who majored in creative writing and Chinese at Emory College of Arts and Sciences, that next step includes plans to study intellectual property rights at law school. For Sara Schneider, who majored in finance at Goizueta Business School, it will involve a new job with CitiBank in New York City.

And for Alex Ghasem, who graduated from Emory School of Medicine, the next step brings with it an orthopedic surgery residency in Miami. "Emory has been a great experience. It’s really become my home away from home," reflected Ghasem, who is from Louisville, Kentucky.

So it went, as thousands of student stories launched a new chapter before friends and family. For Megan Foster’s parents, graduation came with a sense of amazement, as they witnessed their shy daughter "blossom" through her years at Oxford College and Emory’s main campus, with plans to now attend medical school.

For Tiffany Grant’s family, the ceremony brought with it the sheer joy of seeing their daughter achieve her vision of attending Emory, her "dream school," with plans to now pursue a graduate degree in public health.

For Nicholas Mazarella’s parents, who drove 700 miles from Boiling Springs, Pennsylvania, to see him graduate with a degree in neuroscience and behavioral biology and a minor in ethics, the day brought fulfillment in watching their son realize a personal goal.

"Emory was his only choice — he didn’t want to go anywhere else," said his father, Mark Mazarella, who adds that his son will next be engaged in traumatic brain injury research at the University of Pittsburgh Medical Center before applying to medical school.

A remarkable sort of joy

Speaking before a gathering of some 15,000 graduates and visitors, President James Wagner congratulated Emory’s newest alumni for embracing an education "steeped in the ancient traditions and contemporary relevance of the liberal arts."

At a time when universities are "increasingly expected to produce job-ready graduates," the University can "proudly say that Emory alumni are highly employable and employed," he said. "But beyond employability, Emory graduates are ready for life and for citizenship."

The Class of 2014 will especially be remembered for its "remarkable and deep joy, of a sort that comes from having confidence in your abilities, comfort with your own identity and values, and experience in successfully addressing opportunities and issues together in community," Wagner observed.

He praised the graduating class for seeking those opportunities "that could come even out of controversy and difficulty and insult — whether that opportunity manifested itself by contributing to the formation of the Campus Compact last year or helping Emory to form new directions for how higher education seeks to prevent and address sexual violence, or continuing the work that makes Emory almost unique among research universities."

"You have contributed to the building and strengthening of this Emory community," Wagner said. "And in that community you have found your strength."

Not only did the Class of 2014 share in the celebration of Emory’s 175th anniversary, he noted, but it enjoyed the distinction of experiencing "not one, but two visits to campus by His Holiness the Dalai Lama" in his capacity as Presidential Distinguished Professor.

"Maybe you were joyful because you had the even more rare distinction of experiencing the campus being shut down three times owing to snow and ice — once in 2011 and twice in 2014," Wagner said, amid laughter.

"In so many ways you have exercised your own strengths," he added. "And through those strengths you have made a stronger and more deeply joyful Emory."

The ceremony also marked the recognition of University-wide honors for students and faculty for service, leadership, teaching and mentoring.

In addition, three honorary degrees were conferred, including an honorary doctor of humane letters degree to Spelman College President Beverly Daniel Tatum and honorary doctor of laws degrees to former chair of Emory’s Board of Trustees and now trustee emeritus Ben F. Johnson III and Rep. Lewis, who gave this year’s keynote address.

Speaking within weeks of the 50th anniversary of the landmark Civil Rights Act of 1964 and the advent of the Mississippi Freedom Summer, Lewis invited the crowd to step back in time with him to the 1950s, when many cities throughout the South, including the little town of Troy, Alabama, near where he grew up, were segregated by signage: Whites Only. Colored Only.

When Lewis questioned those signs, his parents and grandparents advised, "‘That’s the way it is. Don’t get in the way, don’t make trouble,’" he recalled.

In describing those troubled days, Lewis recalled the June 1964 deaths of three young civil rights workers in Mississippi  — James Chaney, Andrew Goodman and Michael Schwerner — who were murdered while trying to register black voters during the Freedom Summer.

"They died right here in our own country trying to help all of our citizens become participants in a democratic process," Lewis observed.

"As young people, you must understand that there are forces that want to take us back to another period. But you must say that we’re not going back … we’ve made too much progress," he said. "There may be some setbacks, some delays, some disappointment … but you must never, ever give up or give in. You must keep the faith and keep your eyes on the prize. That is your calling, that is your mission, that is your moral obligation, that is your mandate."

"If it hadn’t been for lawyers, I don’t know what would have happened to America," Lewis said. "Under the rule of law, we have witnessed what I like to call a nonviolent revolution in America — a revolution of values, a revolution of ideas."

"Our country is a better country and our people are a better people because of the law," he added.