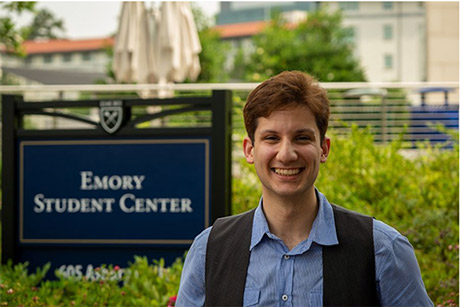 Abdallah Al-Obaidi and his family fled violence in Iraq, eventually coming to the U.S. as refugees. He became a citizen during his sophomore year at Emory and is now headed to medical school as a way to give back.

The Emory Healthcare Veterans Program is expanding its reach by joining forces with the South Carolina Department of Veterans’ Affairs to provide free mental health care and services to post-9/11 veterans and service members.

"Your Fantastic Mind," a television series partnership between the Emory Brain Health Center and Georgia Public Broadcasting, has been honored with six Emmy awards from the National Academy of Television Arts & Sciences Southeast Chapter.

Emory Children’s Center and the Hope Clinic of Emory Vaccine Center are participating in a clinical study that assesses the potential for booster shots of COVID-19 vaccines in a “mix and match” format.

Zeroing in on a mosquito menace

Emory’s campus athletic facilities will reopen July 1 to employees holding memberships. Certain restrictions and limitations are in place to ensure the safety and well-being of all patrons.

Goizueta Business School partners with the LGBTQ Institute on survey

Melissa Williams and Giacomo Negro have partnered with the LGBTQ Institute to survey LGBTQ people in the South about their quality of life related to health care, civic engagement and employment.

Emory faculty and staff are frequently recognized for their work locally, nationally and internationally. Read a sampling of recent accolades, including awards for professional contributions and leadership appointments.

A pivotal mosquito experiment could not have gone better