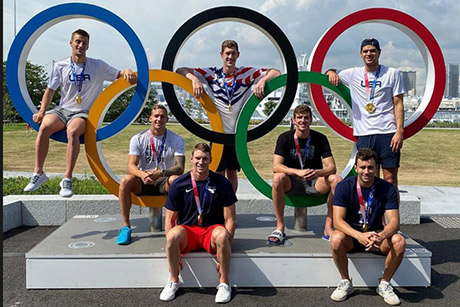 Andrew Wilson is the first NCAA Division III swimmer to represent Team USA, competing in the Tokyo Olympics in the 100- and 200-meter breaststroke. Learn more about his athletic and academic achievements at Emory and see when you can watch him compete.

Launched July 26, 1971, Apollo 15 was the fourth lunar landing mission and the first extended scientific exploration of the moon. A new learning hub created by Emory features primary source records and an interactive 3D model of the lunar module.

Recovered COVID-19 patients retain broad and effective longer-term immunity to the disease, suggests a recent Emory University study, which is the most comprehensive of its kind so far.

A team of six Emory students has reached the final round for Amazon’s Alexa Prize Socialbot Grand Challenge, a global competition among universities to create a chatbot that advances the field of artificial intelligence.

'Your Fantastic Mind' television series airing in cities across the U.S.

As Emory prepares for a full return to campus in the fall, the university hosted two events Monday, July 19, to thank essential staff for their commitment and dedication during the COVID-19 pandemic attended by hundreds of essential staff members.

The Graduate and Professional Student Housing Initiative will increase the supply of competitively priced apartments located within a 15-minute walk or less to all graduate programs.

Research is an integral part of Emory, from the sciences to the humanities. Read a sample of recent grant awards across campus along with newly published research findings.

Emory University has been recognized as the largest employer in metro Atlanta for the third consecutive year by the Atlanta Business Chronicle.

Should children get COVID vaccines? What the science says.

We're zeroing in on the 'holy grail' of COVID-19 immunity

PEPFAR is still without a leader. HIV activists want to know why.

Coca-Cola is changing the flavor of a soda. Again.