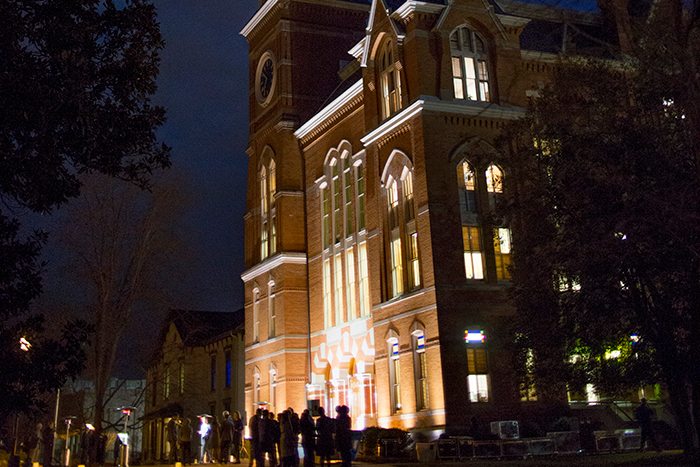 Illumination was the guiding metaphor for the Oxford campus tour, with Seney Hall cooperating fully. 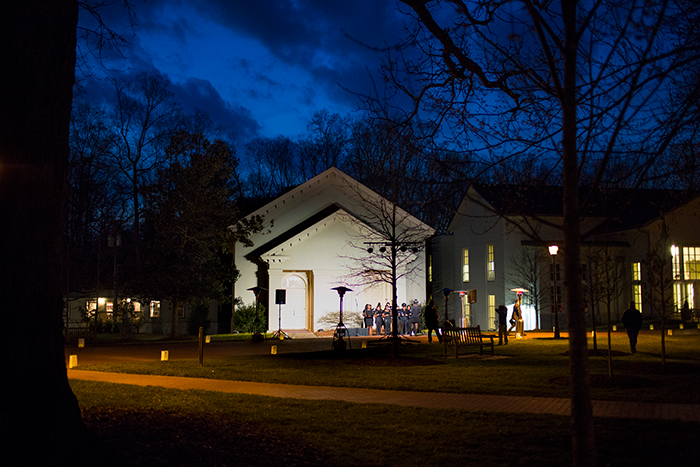 The Oxford Gospel Choir warmed up in front of the chapel in advance of the night’s events. 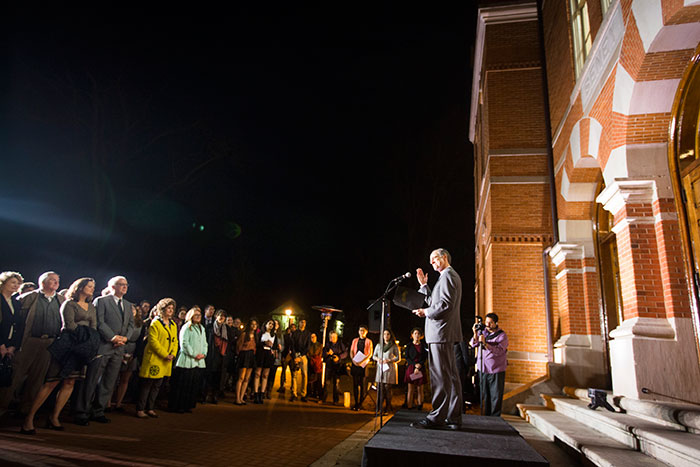 With a wave of his hand, University Historian Gary Hauk signaled the Seney bell to ring 19 times, one time for each of President Sterk’s predecessors. 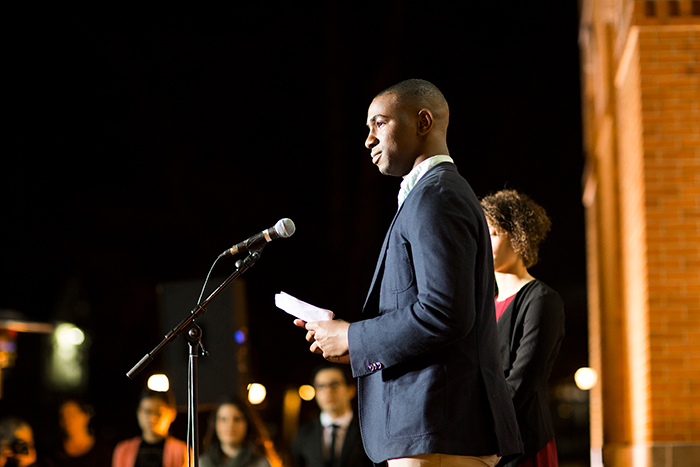 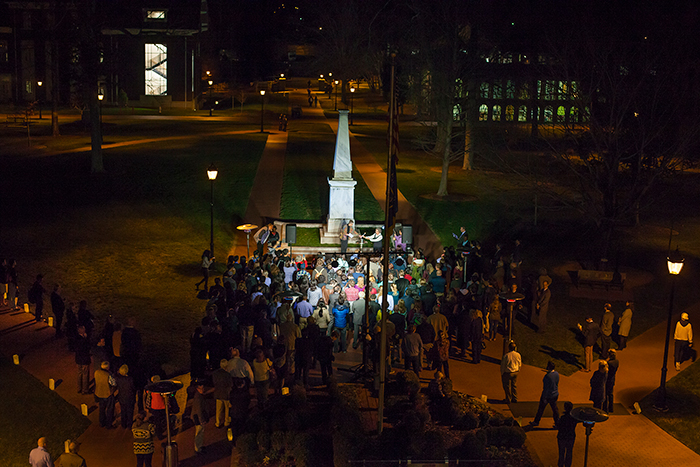 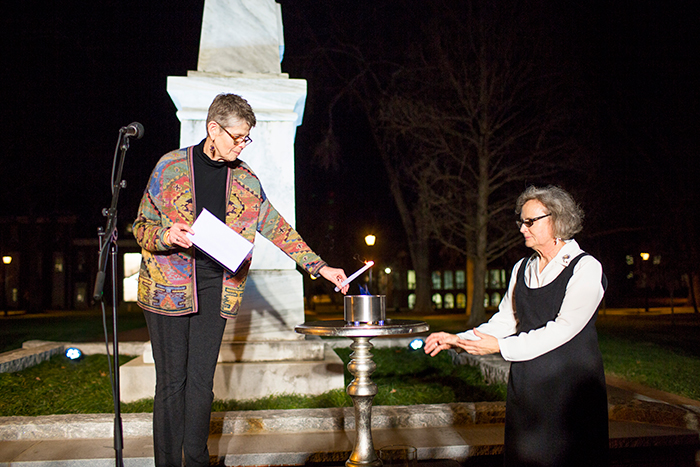 Patterson noted, “Like a flame emanating from a single source, the university, represented by its various units, finds its strength in a common heritage.” 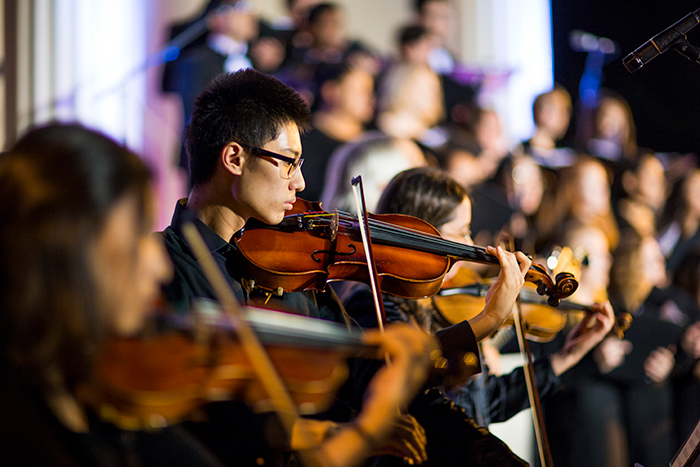 Student musicians accompanied the Oxford Chorale, which performed “Now Is Our Time” in front of Phi Gamma Hall. The song was composed by Oxford history faculty member David Leinweber. 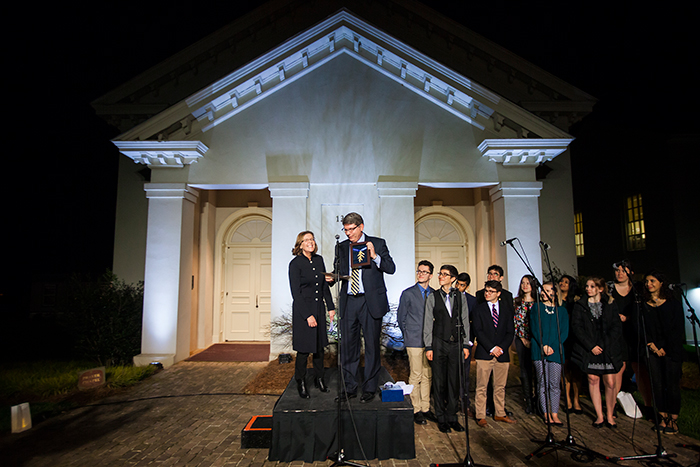 Oxford Dean Douglas Hicks presented President Sterk with an oak leaf from a beloved tree that grew on the Oxford campus for 200 years. The leaf was given with the wish that the president “will flourish, as that oak did.” 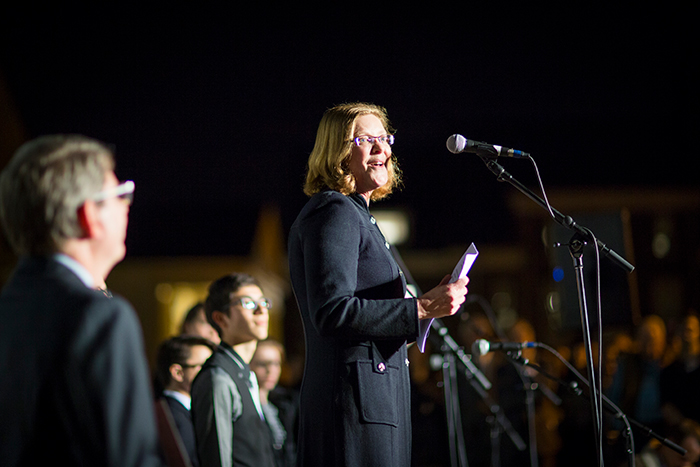 The last word of the night appropriately went to President Sterk, who credited Oxford for being “distinct among our nine schools and colleges.” 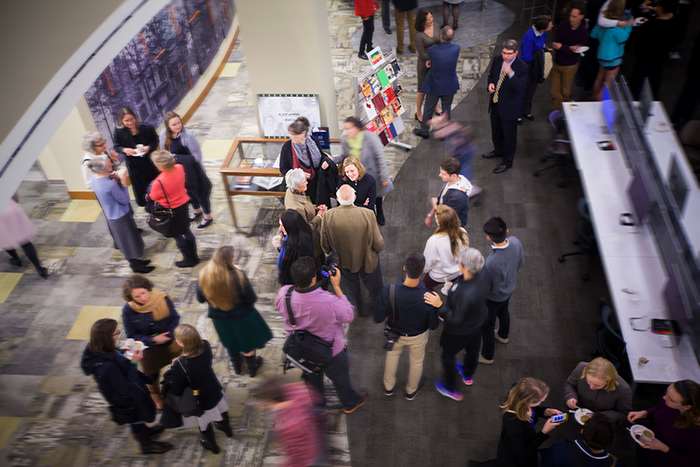 A dessert reception in the Oxford Library followed the tour.

On Wednesday, Emory marks the inauguration of President Claire E. Sterk with a formal investiture ceremony and other campus events. To watch a livestream of the ceremony as it takes place, visit the website of the Office of the President.

Given the season, the winter doldrums could have prevailed. Indeed, heat lamps and cups of hot chocolate were on hand just in case.

Instead, it was a night — and a campus — with spring in the air and its step as dozens of students, faculty, staff, trustees, alumni and friends of Emory marked the first event in President Claire E. Sterk’s inaugural journey by gathering on the Oxford College campus for “A Celebration of Emory’s Heritage and Traditions.”

Founders Day marks the first meeting of the Emory trustees, held Feb. 6, 1837, at which the board officially accepted land belonging to the Georgia Conference Manual Labor School on which to situate their “contemplated college” and the new town of Oxford. The topic of contemplation last night, exactly 180 years later, was the remarkable perseverance of Emory's shared values and the enthusiasm that attends opening a new chapter in the university's history.

Sterk and her husband, Emory research professor Kirk Elifson, could not have asked for better hosts. Standing before Seney Hall, its Victorian Gothic exterior lit to handsome effect, Oxford College Dean Douglas Hicks acknowledged the pair, saying, “We welcome you to the historic home of Emory University. May you continue to visit this special place often.”

University historian Gary Hauk, the next speaker, controlled the best sound effect of the evening — the tolling of the Seney Hall bell, which rang 19 times to signify Sterk’s predecessors.

Hauk’s remarks emphasized the need both to honor traditions and, where possible, extend them to create modern-day relevance. Consider the peregrinations of the bell, a gift from Alexander Means, the fourth president of Emory College. It graced Oxford’s original administration building; however, when the structure was razed, the bell dangled from a tree on the Quadrangle.

Now in a place of honor atop Seney Hall, the bell will toll 20 times via Facebook Live during the president’s Wednesday investiture ceremony in Glenn Memorial Auditorium on Emory's Atlanta campus, nearly 40 miles away.

Addressing the president, Hauk noted, “Today, the bell also calls Emory students who will be your guides on a pilgrimage as you anticipate and reflect upon your approaching inauguration as Emory’s 20th president. Let your heart ponder the significance of the mantle you are about to receive.”

Omole, who hails from Lagos, Nigeria, reflected on the changes to Emory’s student population, observing, “In the beginning, they were young, white and male, and changes to that population only came gradually. Today we are a multiethnic, global community.”

Turning to Sterk, he continued, “We celebrate you as a foreign-born, female president, and the historic mark you will leave on Emory’s ever-advancing legacy.”

As Naveed led the tour, which included Few Monument, Phi Gamma Hall and the chapel, 180 luminaries lit the way, one for each year of Emory’s history.

At Few Monument, faculty members Bobbi Patterson, professor of pedagogy and chief marshal of the university, and Eloise Carter, biology professor and Oxford faculty marshal, greeted the assembled. The two, respectively, are the 2015 and 2016 recipients of the Thomas Jefferson Award, given to honor faculty and staff who significantly have enriched the intellectual and civic life of the Emory community. Patterson and Carter lit a flame, representing the lamp of learning, which will be preserved and presented to Sterk at her inauguration.

As with the bell, the emphasis was on adaptability, for what began as the home of the student debate society morphed, by 1864 and the ravages of the Civil War, into a hospital for the wounded following the Battle of Atlanta. As Jespersen concluded, the Oxford Chorale sang “Now Is Our Time,” composed by David Leinweber, associate professor of history at Oxford, who accompanied the group on guitar.

The tour wound up at the chapel, where the Oxford Gospel Choir performed “O for a Thousand Tongues to Sing.” Student Yi Xie, answering the “call to serve,” noted that “learning occurs in the context of relationships that must be recognized, respected and challenged.

"As students, we draw on these values and serve our community through organizations that emphasize service: service to the world, service to others, service on behalf of a greater good.”

Wisdom 'is a tree of life'

After Oxford chaplain Lyn Pace read from Proverbs 3:13–19, a meditation on wisdom, Hicks presented Sterk with a leaf from the white oak that stood on campus until 2014, having germinated in 1814. “Presidents were inspired by its solemnity, its beauty, its grandeur,” the dean said. “May you flourish, as that oak did, for so long on our beautiful campus.”

And, with that, Sterk took the stage, offering thanks to the tour guides, who, she indicated, “made us all remember where we came from and that we have to look to the past as well as the future.” She continued, “I cannot think of a better place, a more appropriate place, to begin this inauguration journey.” The creation of Oxford College was, she said, “a bold decision, a risk that clearly paid off.”

Emory’s 20th president then promised, come the tolling of the 20 bells on Wednesday, which she termed “a tuneful message of our strength and optimism going forward,” to recommit to Emory’s historic mission, all the while staying bold and taking responsible risks.