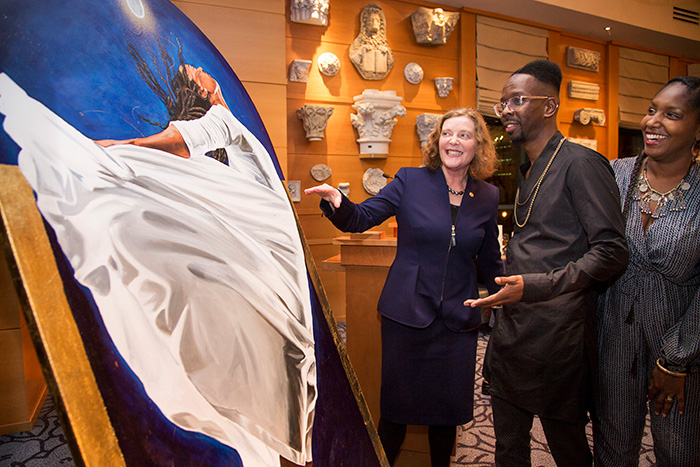 President Claire E. Sterk talks with artist and Emory PhD student Fahamu Pecou (center) about "Emerge," the painting he created to commemorate her inauguration, as his wife, Jamila Pecou, looks on. 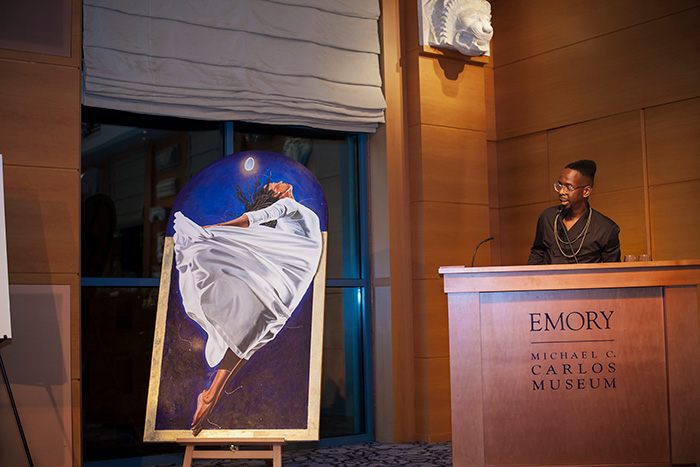 "As the Emory community embarks on a new dawn, I hope this piece will serve as a reminder and source of inspiration," Fahamu Pecou told the audience gathered for the unveiling of "Emerge."

When Emory PhD student Fahamu Pecou was asked by the Emory Alumni Association to create a work of art commemorating the inauguration of President Claire E. Sterk, he approached the challenge as both an artist and a scholar.

First, Pecou did his research, sitting down in conversation with Sterk to discover more about her life and work. The more he learned about the internationally acclaimed public health researcher and academic leader, the more he realized how much they had in common.

“Though her work is rooted in the sciences and mine in the humanities, there was not very much difference in our approach,” observed Pecou, a fast-rising visual artist and scholar whose own bold work has been featured in private and public collections around the world.

“She shares my passion for engaging with communities outside of the academy. Similarly, she shares a commitment to doing the work — to make meaningful and impactful contributions to society informed by in-depth scholarly inquiry,” he said.

Next, Pecou dove into a deep exploration of Emory’s symbolism and iconography. Once his scholarly research was complete, the artist was moved to interpret.

The resulting artwork, “Emerge,” was unveiled Tuesday night before an appreciative crowd at a reception hosted by the alumni association at the Michael C. Carlos Museum.

The large acrylic painting depicts a female figure in a white gown rising off the ground, as if frozen mid-leap — an image inspired by “The Phoenix,” the name of one of Emory’s original student journals.

And so the imagery of a phoenix, rising and reborn, would inform the painting.

In the flowing folds of her gown, Pecou saw wings.

In conversations with Sterk, “one of the things that we talked about was the importance of Emory not as an island, but contributing to and engaging with Atlanta,” he noted.  “When we think of Atlanta, we think of the phoenix — a city born out of its own ashes. A city of transcendence and transformation.”

The final work also reflects Emory colors: The figure is set against a deep blue sky and bounded by a gold-leaf frame; above her floats a glowing golden egg, representing what is yet to come.

Once the painting was unveiled, Sterk praised it as “a wonderful piece of art,” adding that it will be displayed “in a prominent place, where every day we can be reminded of its message.”

“This is just an incredible moment for Emory,” she said. “I think what Fahamu’s art shows us is how much is at stake, how much potential that we have here.”

Smiling, Sterk observed that the female figure’s feet have already left the Earth, propelled skyward. Like the figure, Emory is already “off the ground and moving forward,” Sterk said. “And we will do so with grace and determination.”

The transformative power of art

For Pecou, the painting has come to embody themes of inclusion and diversity, an opportunity to “think about the university beyond the vocabulary of images that have existed, signifying a shift, a change of perspective.”

Speaking before the crowd, the artist-scholar shared a bit of his own perspective, too, describing how he had learned as an undergraduate that art had “the power to transform us” — a revelation he likened to discovering “a superpower.”

“I began to see that through art I could affect change both in and around me,” he said. “I decided then that making pretty pictures was not enough. I set out to make work that would do something, be a catalyst for change.”

Since then, his career has exploded, with exhibits in top international and national galleries, including the High Museum of Art and the Museum of Contemporary Art Georgia (MOCA), and public lectures and speaking engagements nationwide.

Last year, one of Pecou’s paintings was acquired by the Smithsonian National Museum of African American Art and Culture in Washington, D.C. He’s also completing a series of large-scale art installations at four Atlanta MARTA stations.

It was after establishing the foundations of a successful art career that Pecou found his way to graduate studies at Emory’s Institute of the Liberal Arts and Laney Graduate School, drawn by a yearning to be challenged in an intellectual environment.

“Ultimately, deepening my pool of knowledge would substantiate my work and me,” he said. “Very early on, I began to see my experience as a scholar not as a complement to my practice — or vice versa — but rather, the two sides became inextricable.”

For Pecou, scholarship became not so much an exercise in “how much do you know,” but rather the challenge of “what can you do with what you know?”

“As a result, my work ceased to be merely substantiated by the ideas I was introduced to, and instead became an expression — an activation — of those very ideas. Not just in theory, but in voice, in form and function.”

While at Emory, Pecou said he’s gained a deeper sense of purpose, both for himself and his artwork.

“What became most apparent to me is the idea of function,” he said. “What is scholarship without action? What is a pursuit of knowledge that fails to serve our fellow man? How can we, as scholars, use our knowledge for the good of all?”

Pecou emphasized that it is with pride and honor that he created the new artwork in celebration of Sterk’s vision.

“As the Emory community embarks on a new dawn, I hope this piece will serve as a reminder and source of inspiration,” he said.

“May it remind us that knowing is only half the battle. Emory’s symbols, the torch and bugle, signify the search and sharing of knowledge. It is my hope that so-armed, we will now be inspired to leap boldly forward, to act on what we know and to use our collective superpowers to make our world better for all humanity.”