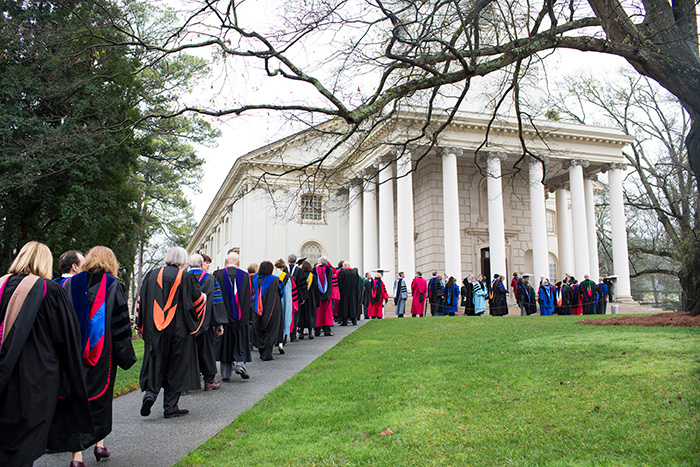 President Sterk's inauguration began with a colorful procession of Emory faculty, members of the Board of Trustees, representatives from other institutions and academic societies, and other honored guests. 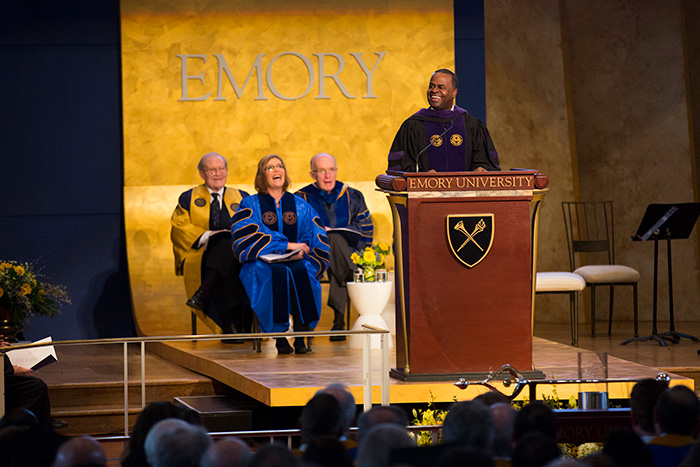 Atlanta Mayor Kasim Reed welcomed Sterk into her new role and praised her commitment to deepening Emory's engagement with Atlanta. 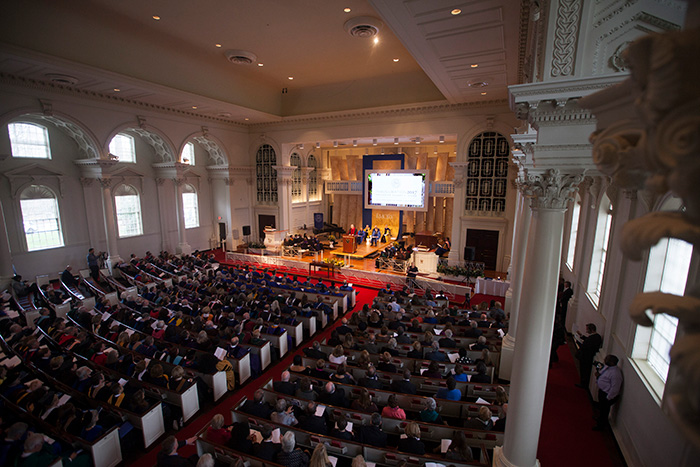 Steeped in tradition, the ceremony filled Emory's Glenn Memorial Auditorium and could also be viewed through a live webcast. 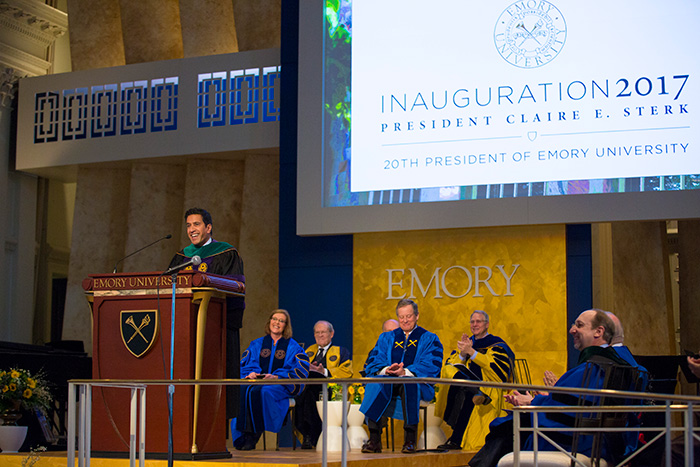 Emory neurosurgeon and CNN chief medical correspondent Sanjay Gupta gave the keynote address, noting that Emory has both the ability and the responsibility "to make a better and stronger world." 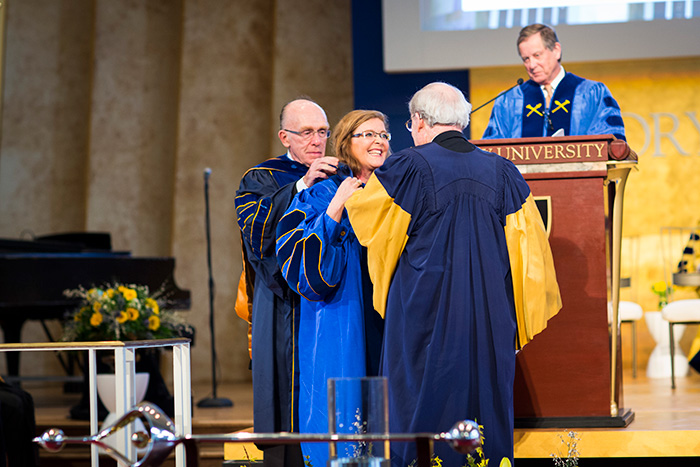 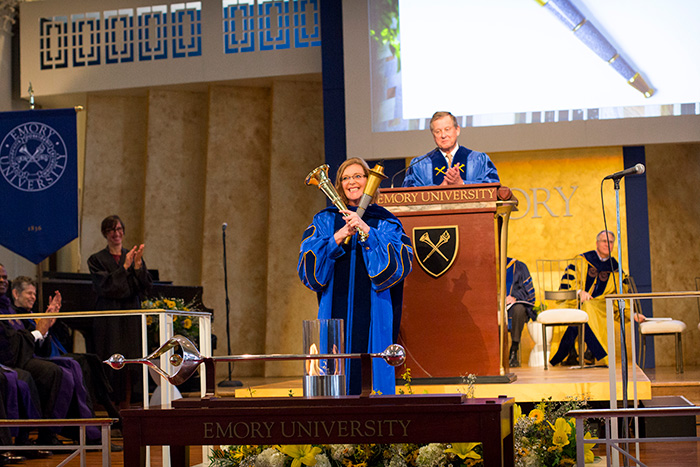 After receiving the torch and trumpet, Sterk drew appreciative laughter by holding them crossed as they appear on the Emory shield. 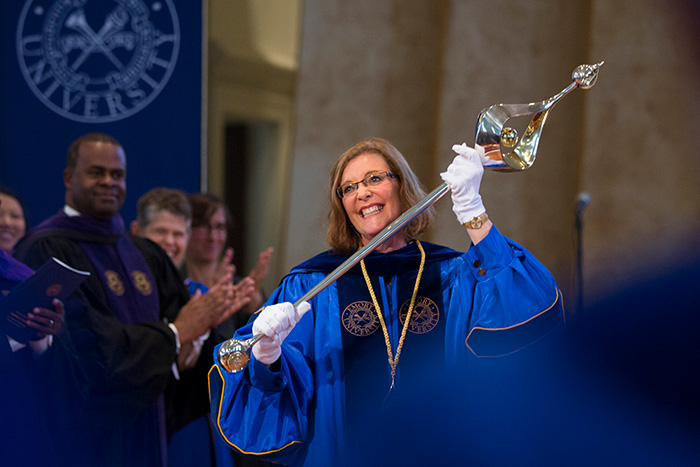 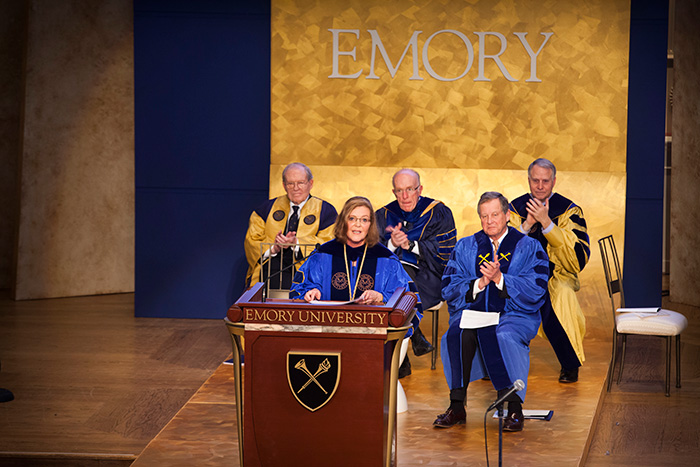 "Now is the right time for Emory to seize its ambition. We will make the right choices and leap forward," Sterk pledged in her inaugural address. 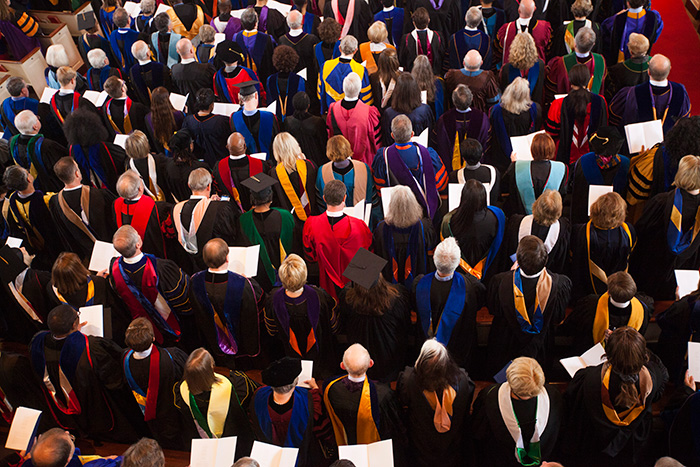 As the inauguration ceremony drew to a close, attendees rose for the singing of Emory's alma mater.

In a ceremony honoring both Emory's rich history and the bright promise of a bold future, Claire E. Sterk was inaugurated Wednesday morning as the university's 20th president.

With commitments to build an inclusive community, promote local and global engagement, and to lead by employing “Emory’s enduring qualities of excellence, distinctiveness and relevance,” Sterk formally accepted the charge of leadership in a service featuring music and poetry, distinguished guests and time-honored rituals.

“I am hopeful about the future because I know what the people at Emory are capable of accomplishing. We will be guided by what we stand for: knowledge, the pursuit of truth, evidence, rational reasoning and ethical principles,” she said.

“Our past demonstrates that with the right people aligned behind a common purpose, we will forge a future worthy of our ambition.”

The internationally acclaimed public health researcher was unanimously elected to lead the university in June by the Emory Board of Trustees, following an intensive national and international search. A native of the Netherlands, Sterk is Emory’s first female president and also its first president who is a social scientist by training.

That historic distinction was highlighted by Sanjay Gupta, assistant professor of neurosurgery at Emory School of Medicine and CNN chief medical correspondent, who delivered the keynote address.

Sterk’s appointment builds upon more than two decades of service to the campus community. She arrived at Emory in 1995 with an appointment to the faculty of the Rollins School of Public Health, where she is the Charles Howard Candler Professor of Public Health.

During her tenure here, she has served the university as a professor, researcher, academic leader and administrator. In 2013, she was named provost and executive vice president for academic affairs.

Sterk took office as Emory's president on Sept. 1, 2016, succeeding James W. Wagner, who retired after 13 years at the university's helm.

Advancing a culture of connection

With the cry of a bagpipe and the rumble of a drum, the ceremony began at 10 a.m., as a piper led a procession of Emory faculty, trustees, staff, administrators, students, and special guests dressed in academic regalia into Glenn Memorial Auditorium.

Bobbi Patterson, chief marshal of the university, gave the summons to convocation and Bridgette Young Ross, dean of the chapel and spiritual life, offered an invocation, inviting a packed sanctuary to join in reflections of gratitude for the university and “our small part in a great, great history.”

John F. Morgan, chair of the Emory University Board of Trustees, welcomed attendees, then a specially commissioned inauguration poem — titled "XX" — was presented by Kevin Young, University Distinguished Professor and Charles Howard Candler Professor of Creative Writing and English, and director of the Schomburg Center for Research in Black Culture.

Explaining that the poem’s title represented the Roman numeral for “20,” Young opened with: “To begin is to believe. Think of how the leaf decides it is spring, crouched and royal in its skin, that isn’t yet. The green that awaits, brown, then bud, then blossom…”

With familiar imagery from around the Emory campus — the statue, cigared, bronze; the Rose; the no smoking signs, the twos and threes of juniors laughing — his prose celebrated both the university and the promise of fresh starts.

“Looking up, the green above a belief, just beginning,” he concluded.

“I know she values the important partnerships that Emory students, faculty, staff and administration can develop with people and places outside of academia — throughout the city of Atlanta and beyond,” Reed said. “She believes in the culture of collaboration. She’s lived it.”

Sterk understands “that we’re living in an age of global connectivity,” Reed explained, adding that she has been "a critical sounding board for me as mayor and I know she will make a superb president and partner for years to come … building a deeper engagement with Atlanta. For that, we are excited. That engagement is so welcome.”

“Frankly, I’m a bit humbled to be here,” he said. “Professor Sterk has been at Emory for 20 years and has ascended to the presidency. I’ve been here just a few years less and am just the morning’s entertainment.”

Gupta said he was inspired to speak at Sterk’s inauguration in part because of his wife and three “outrageously curious and engaged daughters,” ages 11, 9 and 7, “who spend their time trying to change the world, trying to make it a better place." “There is a lot of girl power in my house,” he said.

Another daughter suggested Sterk require her direct reports refer to her as “Madam President.” But it was his youngest child who perhaps offered the greatest insight: “What difference does it make that she’s a female?” she asked.

“With all due respect, Madam President, she thinks there should be nothing special about women wielding power,” Gupta concluded, to hearty applause.

Sterk has become president at a pivotal time. “There are real collisions between science and conjecture, at times a true disdain for evidence and facts, even an assault on truth and knowledge," Gupta said, arguing that "higher education is crucial — more crucial than ever — and higher education needs leaders willing to fight on its behalf."

Noting that Sterk lived in The Netherlands until she was 30, he acknowledged that “as an immigrant to this country you’ve already contributed so much. I think that’s a point worth making, especially now.”

As chair of the Board of Trustees, Morgan led the formal presidential investiture, launched with a live video feed of Oxford College’s Seney Hall bell ringing 20 times in honor of Emory’s 20 presidents.

Former Emory presidents James T. Laney, William Chace and James Wagner and members of the Board of Trustees presented Sterk with symbols of the office, including the gown of office, a sprig of Wesley holly, charter documents, keys, the Emory torch and trumpet, the medallion of office and the gleaming university mace. After Sterk received the mace, attendees rose in a standing ovation to welcome the university's new president.

Sterk then addressed the convocation, outlining her commitment to Emory's mission "to create, preserve, teach, and apply knowledge in the service of humanity" and looking ahead to a bold future for the university.

“Today we celebrate an institutional rite of passage,” she said. “We do so with excitement, determination and optimism because of our faith in and hope for Emory.”

“The opportunity to lead Emory in this moment of history is a tremendous honor,” she noted. “It also brings an equal share of responsibility. I am humbled by the confidence that so many of you place in me.”

Harkening back to her childhood in The Netherlands, Sterk recalled pretending to conduct an invisible orchestra when no one was around. “Given that I am standing before you today, I believe in many ways I have received a role that resembles my adolescent dream,” she said.

“I relish inspiring people to collaborate and make the whole greater than the sum of its parts. I am inspired by listening to all voices and harmonizing those into an inclusive community — a community with focus and intent and based on mutual respect.”

Reflecting on her upbringing, Sterk acknowledged her parents, whose own educations were cut short by World War II. “That makes me the first in my family to graduate from high school,” she said.

Yet she also credited her parents for instilling in their children a deep love of learning. “They taught us the value of compassion and caring and insisted on courage,” Sterk said.

“My parents taught us: ‘als je de controle los laat, gebeuren de mooiste dingen,’ which means, ‘If you are willing to be open to others, the most beautiful things will happen,’” she said.

“I am grateful for the lessons they taught me, for these align beautifully with the lessons we learn and teach at Emory: lessons for living, for caring, for courage, and the value of knowledge, preservation and inquiry. Lessons that are rooted in a history of bold actions, inspired by the motivation to serve humanity.”

Heeding a call to action

From her first days on the job, Sterk says she has felt a call for action and a sense of “shared responsibility to the world.”

“I am encouraged by and committed to Emory’s core values of inclusion, compassion, collaboration, integrity, optimism and boldness,” she said. “I share these values and I will forcefully represent them.”

Sterk closed with a quote attributed to Abraham Lincoln, who was president of the United States when Emory College was just a quarter-of-a-century old: “Character is like a tree and reputation is like its shadow,” she quoted. “The shadow is what we think of it; the tree is the real thing.”

“We must ensure that the reputation of Emory, the way in which the world perceives this great university, is consistent with the real thing. We need to help the world see and appreciate our deep and nurturing roots, our substantial and solid trunk, and its widespread and flourishing branches.”

Recalling her parents' lesson about being open to others, Sterk pledged that Emory will also "be open enough for amazing things to happen.

“Now is the right time for Emory to seize its ambition,” she said. “We will make the right choices and leap forward.”