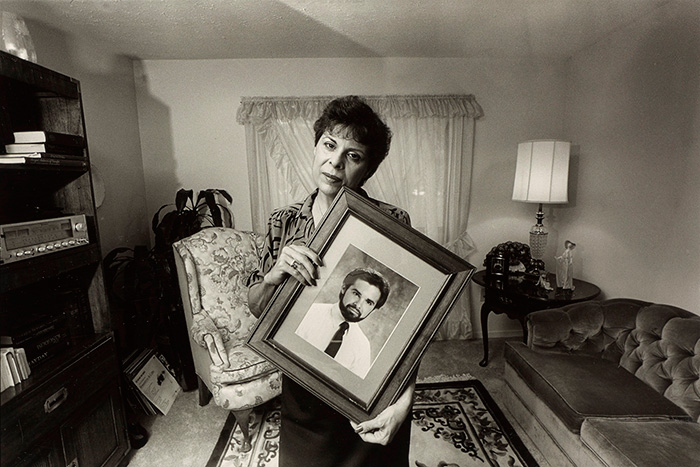 "Mother, don't worry. It's just a virus. I'll be O.K. I always have and I always will be." —Ricardo M. Llera. Image: Billy Howard, from the Billy Howard photograph collection at the Rose Library, Emory University. 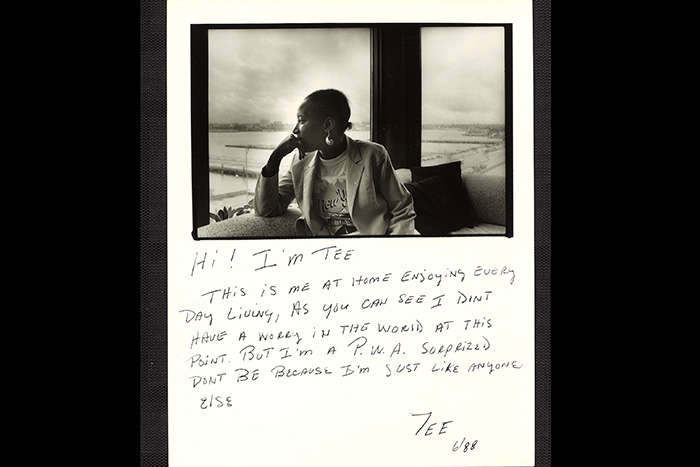 "As you can see I don't have a worry in the world at this point." —Tee, June 1988. P.W.A. stands for Person With AIDS. Image: Billy Howard, from the Billy Howard photograph collection at the Rose Library, Emory University. 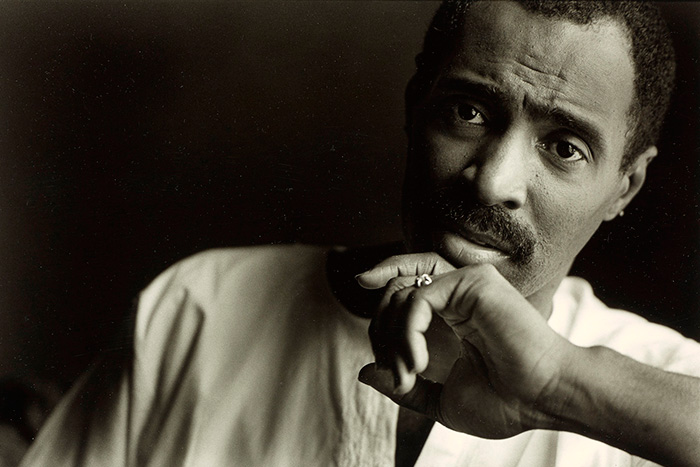 "One day people will not judge a person by the color of their skin, their sex, or their sexual preference, but the content of their character." —Marquis D. Walker. Image: Billy Howard, from the Billy Howard photograph collection at the Rose Library, Emory University. 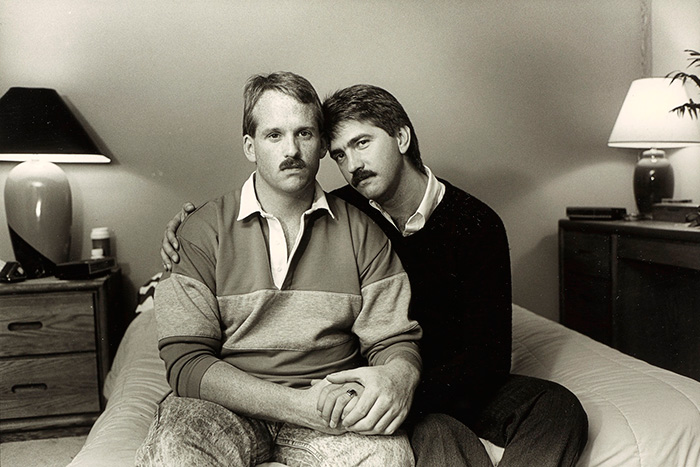 "It's been very hard to watch as life melts away from the one I love and I can do nothing but be there for him and love him with all my heart." —Ron. Image: Billy Howard, from the Billy Howard photograph collection at the Rose Library, Emory University. 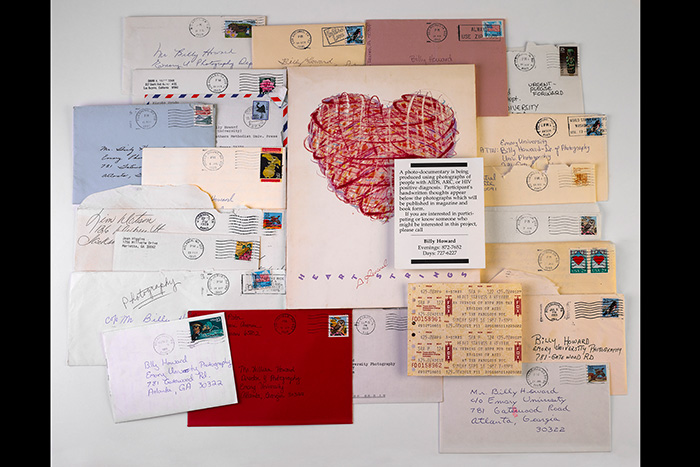 Billy Howard corresponded with those whose portraits he took, as well as their loved ones, and he attended the funerals of many people he photographed. Image: Paige Knight, Emory Libraries. 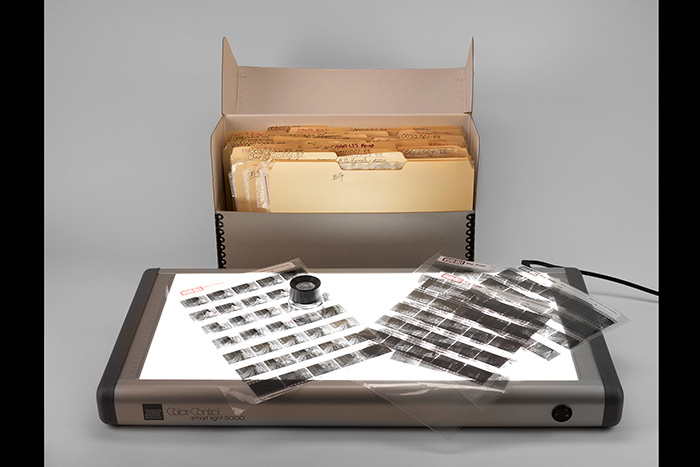 Howard took multiple shots of each person he photographed for the "Epitaphs" project. His sheets of negatives – the photos not used in the book – are included in the collection at the Rose Library. Image: Paige Knight, Emory Libraries. 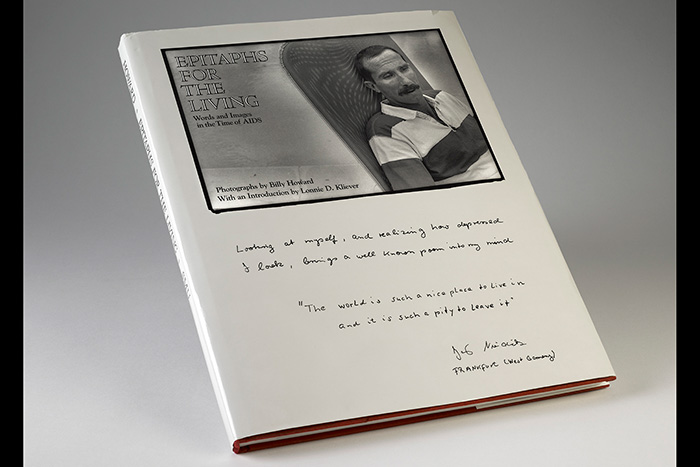 Billy Howard's photographs for his book "Epitaphs for the Living: Words and Images in the Time of AIDS," is now in an organized collection available for viewing and research at Emory University's Rose Library. Image: Paige Knight, Emory Libraries.

A collection of Atlanta-based photographer Billy Howard’s work from his “Epitaphs for the Living: Words and Images in the Time of AIDS” project is now open at Emory's Stuart A. Rose Manuscript, Archives, and Rare Book Library.

An exhibit of the photographs from Howard’s “Epitaphs” series is planned for summer 2017 at Emory’s Robert W. Woodruff Library. More information will be posted on the Woodruff Library News and Events page as details develop.

Beginning in 1987, Howard photographed people with HIV/AIDS and asked them to write a note on the prints about living with disease. Southern Methodist University Press published a book based on the photographs in 1989.

“This collection adds significantly to the wide range of stories told by the Rose Library as we seek to document the vicissitudes of human experience, through all of its depth, struggles and artistry,” says Rosemary Magee, Rose Library director.

“I was bowled over the first time I saw Billy’s photographs. They were so powerful,” says Randy Gue, curator of the Rose Library’s modern political and historical collections. “The combination of words and images put a face and story to an epidemic that is often described with statistics.”

Howard was the director of photographic services at Emory University during the time he worked on the project, and he says the support and encouragement he received, from then-Emory President James Laney to his direct supervisor and co-workers, was invaluable to the completion of the work.

“When I heard that Randy Gue was gathering materials to document Atlanta’s response to AIDS in the early years of the pandemic, I felt it was the perfect place,” Howard says. “It’s like they are going home.”

Gue says Howard’s collection represents an important addition to the Rose Library’s materials that document the HIV/AIDS crisis in Atlanta and the South. These collections include the personal papers of Jesse R. Peel, David A. Lowe and Rebecca Ranson, and the records of AID Atlanta, the Atlanta Gay Men’s Chorus, Positive Impact, and the Southeastern Arts, Media, and Education Project (SAME).

“There were few treatment options in the early days of the epidemic; AIDS was a death sentence,” Gue says. “Billy started working on this project in 1987, and by the time the book was published in 1989, 18 of the people he photographed had died. The photographs and notes provide a valuable perspective on the history and evolution of an epidemic that is still with us today.”

To make arrangements to view the collection, visit the Using Rose Library page or call 404-727-6887.