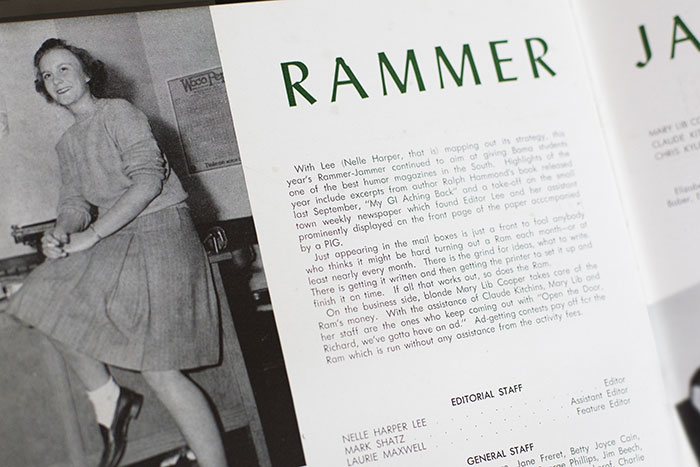 The Harper Lee collection includes a 1947 University of Alabama yearbook, “The Corolla,” which includes a photo of Nelle Harper Lee, who was editor of the Rammer-Jammer, the campus humor magazine. 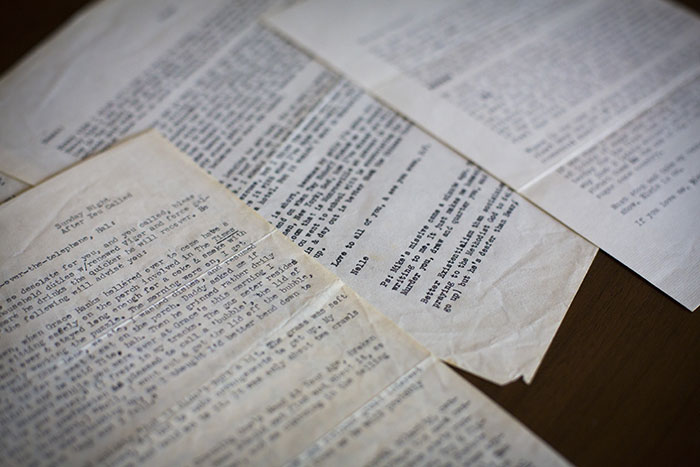 Many of the letters in the collection are signed “Nelle,” which the novelist used for inscriptions to close friends.

A collection of letters written by Harper Lee between 1956 and 1961 to her close personal friend Harold Caufield and his circle of friends is now held by Emory’s Stuart A. Rose Manuscript, Archives and Rare Book Library. Emory Photo/Video

A collection of personal correspondence and memorabilia of renowned novelist Harper Lee, author of “To Kill a Mockingbird” and “Go Set a Watchman,” has been acquired by Emory University’s Stuart A. Rose Manuscript, Archives and Rare Book Library.

The letters, written between 1956 and 1961, are from Lee to New York architect and close personal friend Harold Caufield and his circle of friends, which included Michael and Joy Brown, the couple who financially supported Lee for a year while she drafted “Go Set a Watchman” and began work on what would become “To Kill a Mockingbird.”

“This correspondence of Harper Lee offers meaningful revelations into her life and her love of words,” says Rosemary M. Magee, director of the Rose Library. “We find her candid and insightful, modest yet full of life, thankful for the love and support of friends. Along with photographs, an inscribed volume and other related materials, these letters have found a most welcoming home in the Rose Library, where we celebrate literature that has the power to shape our own words and work and to transform lives.”

Emory acquired the letters from retired attorney Paul R. Kennerson of La Jolla, California, who said he approached the university about becoming the permanent home of the archive after having met and talked with Emory historian Joseph Crespino. Crespino reached out to Kennerson while researching his forthcoming book, “Atticus Finch: The Biography,” available May 8, 2018.

Crespino’s book is a cultural and political history of Lee’s most famous character. It draws on exclusive sources to reveal how Lee’s father, Amasa Coleman Lee — who practiced law, served in the Alabama State Legislature and was owner and editor of the Monroe Journal — served as the real-life inspiration for both the idealized character in “To Kill a Mockingbird” and the embittered, reactionary figure in “Go Set a Watchman.”

“This correspondence from Harper Lee, some of which show her at home taking care of her ailing father, provides wonderful insight into her life during the critical years when she wrote what would be her only two novels,” says Crespino, who serves as Jimmy Carter Professor of History. “They provide a window into her life and her views during a period of tumultuous change in southern political life. Read with other historical sources, they offer clues as to why the character of Atticus seems to diverge so sharply between the two novels.”

“These letters complement the research being done by Joe Crespino so perfectly that I was taken with the fit of it and was highly impressed with other work being done at Emory,” Kennerson notes. “I can’t think of a better place to house these materials for future use by researchers and scholars.”

Four of the six letters in the collection date from several years before Lee published ”To Kill a Mockingbird,” and two are from the year following publication, by which time the novel had become a best-seller and Pulitzer Prize winner. Also included in the archive is a 35th anniversary edition of “To Kill a Mockingbird” inscribed to Caufield and signed “Nelle Harper,” which she reserved only for inscriptions to close personal friends.

According to Jennifer Meehan, incoming interim director of the Rose Library, the archive, which is still being processed, will be available to the public beginning April 2.