From politics to peanuts, Carter fields questions from Emory students 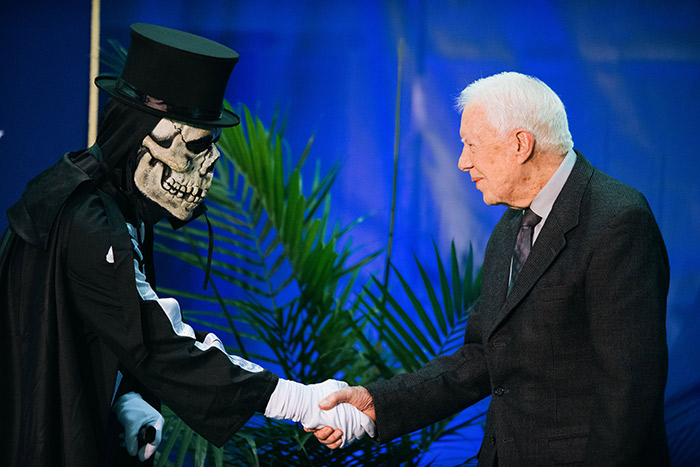 President Jimmy Carter is greeted by Dooley, Emory's Lady of Misrule, at the start of the Carter Town Hall. 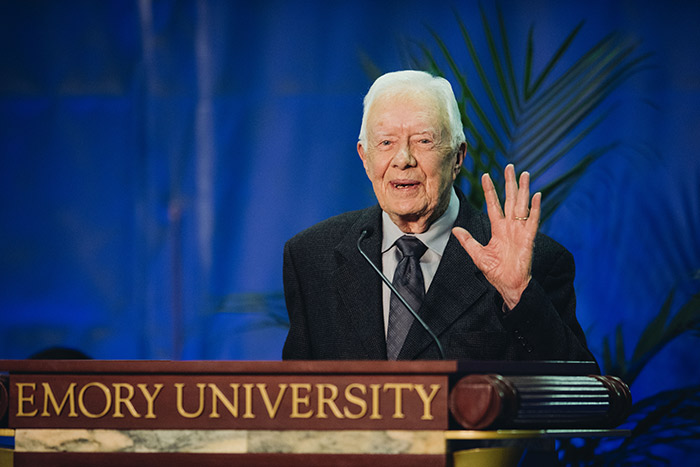 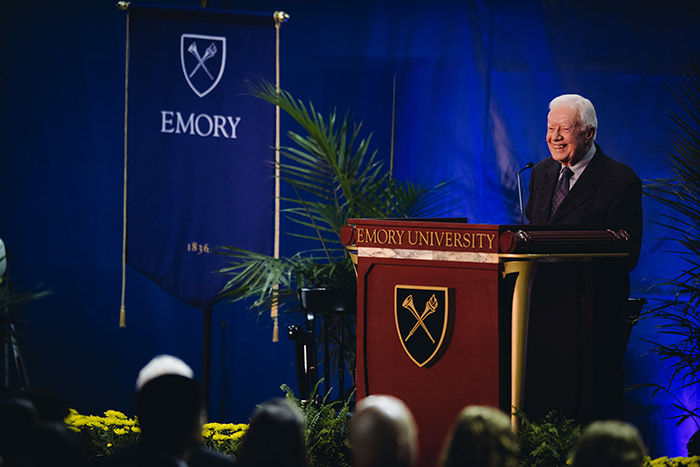 Carter answered questions from the audience on a wide range of topics, from peanuts to politics. 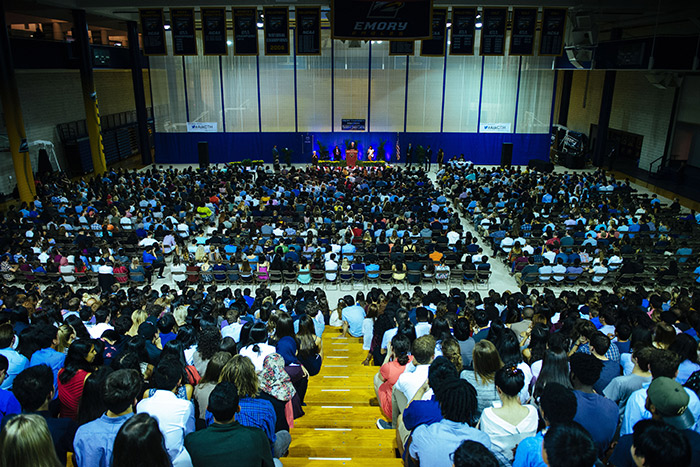 The packed audience included first-year students from Oxford College and Emory College of Arts and Sciences, as well as other university guests. 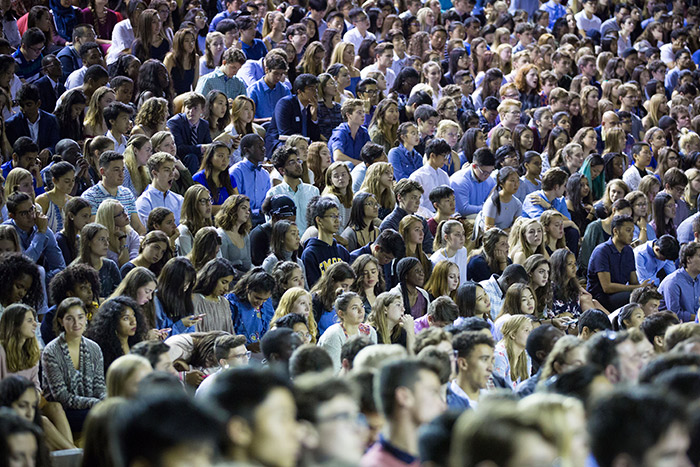 Students could submit questions on notecards or via social media. 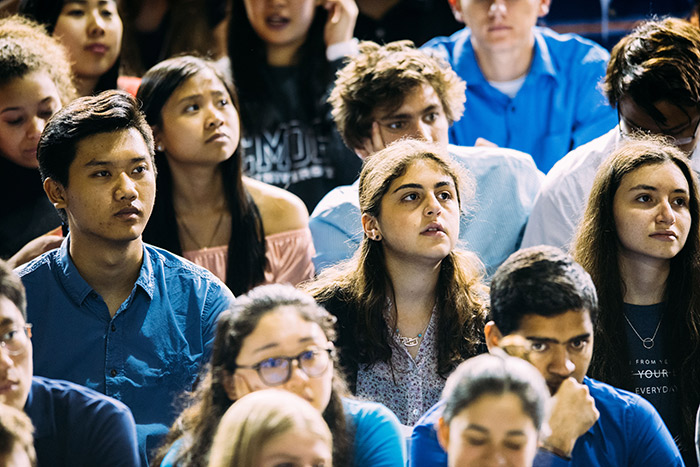 The annual Town Hall is a tradition for first-year students at Emory. 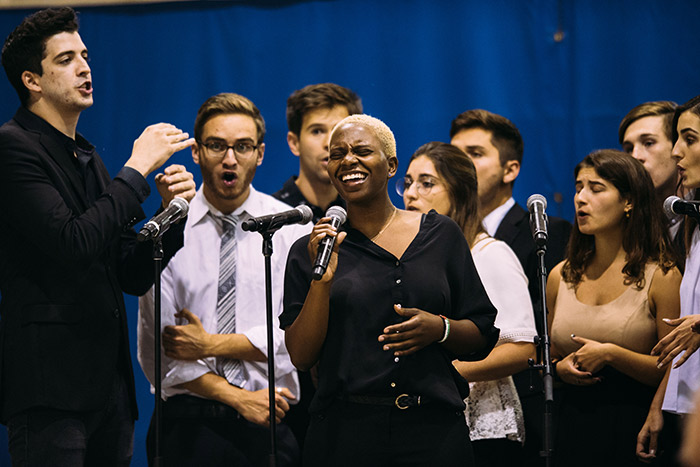 A year in the life: Jimmy Carter shares his cancer experience July 11, 2016

From challenges surrounding U.S. immigration reform, global health, human rights and peace-making, to his thoughts about whether Twitter belongs in the Oval Office, and yes, even his preference in peanuts (salted or not?), the 92-year-old statesman fielded questions submitted by first-year Emory students for nearly an hour in a thoughtful, generous exchange.

For Carter, it’s a familiar role. In addition to serving as a state senator, Georgia governor and 39th president of the United States — and subsequent work as an acclaimed global humanitarian — Carter has engaged in the lives of Emory students and faculty as a University Distinguished Professor since 1982.

“Thirty-six years ago, I was introduced as the only person who ever used the White House as a stepping-stone for greater things,” quipped Carter.

“Every time I go to North Korea, or to negotiate in Israel, or to visit Gaza, or to try to deal with the problems in Syria or to hold elections in Nepal … I am always very proud to say I come as a distinguished professor at Emory University.”

Introducing the former president, Ajay Nair, senior vice president and dean of Campus Life, praised not only the experience Carter brings as an educator and statesman, but also his “tireless commitment to serving humanity, his candor and his quiet courage and unflappable grace in confronting challenges on the world stage.”

The time-honored tradition played out before a crowd of about 1,400 first-year students, academic leaders and honored guests, who packed the Woodruff P.E. Center gymnasium.

“My dad went to Emory and remembers hearing Jimmy Carter lecture when he was a student here — I was excited at the chance to hear him, too,” said Cleopatra Myrianthopoulos, a business and political science major from Port Washington, New York, whose father, Evan, graduated from Emory in 1986.

Given the nation’s current political climate, students like Dominic Lal were especially curious to hear Carter’s thoughts. “This is an opportunity that just doesn’t happen every day,” said Lal, a neuroscience and behavioral biology major from Conyers, Georgia.

Politics and policy dominated the evening’s question-and-answer forum, which quickly dove into issues at the forefront of national dialogue.

When asked his thoughts about President Donald Trump’s “decision to end DACA,” Carter quickly noted that Trump “has not ended DACA yet,” but instead gave Congress six months to address the long overdue issue of what to do about the children of immigrant families who came to the U.S. illegally.

On the same evening that U.S. Democratic Congressional leaders were attempting to work out a compromise with Trump on the topic, Carter reminded students that “we don’t know for sure whether he’s going to say yes or no, because he’s said both sides — so far.”

As for immigration reform, “I don’t see that it’s a hopeless case. I think the pressure now and the publicity Trump has brought to the immigration issue might have stimulated both Democrats and Republicans in the House and Senate to be more accommodating in this longstanding argument, I hope.”

When asked about the merits of a single-payer health care system, now being championed by Sen. Bernie Sanders of Vermont, Carter reflected on his own efforts to introduce a bill that would have incrementally phased in “Medicare for all,” starting with young children.

Though such a system would be quite expensive, “theoretically, the single-payer insurance program … is the best idea,” Carter said, adding that he benefited from a similar program in Canada recently when he was hospitalized after overheating during a Habitat for Humanity building project.

“I went to the hospital and they took good care of me, kept me there overnight,” he recalled. “The next day, I said, ‘How much do I owe you?’ (The answer was) ‘Zero.’ So that was very nice.”

But the discussion wasn’t completely mired in serious political topics. When asked if he would have used Twitter had it existed during his presidency, Carter smiled.

“If Twitter was around then I may not have been president,” he quipped, quickly adding that if it had been available, “I certainly would have tried to use it.”

A legacy of human rights

When queried about the best path forward for LGBT students seeing their “rights washed away by President 45,” Carter said his best advice to Trump would be to “promote human rights, to keep our country at peace, and to tell the truth.”

Asked what one world problem he would choose to solve, Carter acknowledged that his long-held life goal was to bring peace to Israel and its neighbors. But lately, “I might elevate the conflict in Syria to the top of my priority list, just to save people’s lives,” he added.

Carter lamented the fact that partisan politics have cast deep divisions in the nation not seen since the time of Abraham Lincoln. He also bemoaned the impact of what he called the U. S. Supreme Court’s “stupid decision” in the Citizens United case, which ruled that free speech prohibits the federal government from regulating campaign spending by organizations.

The result? Political candidates must now raise hundreds of millions of dollars, which distorts the American political system from a democracy into an oligarchy, he said.

Addressing an audience of eager, young minds, Carter couldn’t resist urging Emory students seeking to engage in social activism to consider applying for an internship with The Carter Center, an affiliate of Emory dedicated to "waging peace, fighting disease and building hope."

He reminded students that they are now “perhaps at the most free stage in your life — you enjoy more freedom now to make your own decisions, to do innovative, remarkable things, to try goals you can’t reach — than you’ll ever be again.”

“Strive for it. Go all the way you can to achieve those goals,” he said. “If you have a setback, understand why you had the failure, then set a different goal, but even a higher goal… I don’t think you’ll ever run out of goals.”

The evening began and ended with questions about peanuts and peanut-farming — appropriate, given that the occasion coincided with National Peanut Day.

When asked by 10-year-old Lucian Nixon, a distant Carter cousin from LaGrange, Georgia, how many peanuts he had grown, Carter reflected on how he had been growing peanuts “ever since I was old enough to go into the field and work.”

At the age of six, Carter recalls harvesting peanuts from his father’s field, washing them and soaking them overnight in salty water. He would rise at 4 a.m. the next day to boil and bag the nuts and take them into town, where he would sell 20 bags of peanuts for a nickel each, earning $1 a day, or “as much as a grown man who worked in the fields.”

By the time he was 12, Carter said he had saved enough money to buy five houses in Plains, which he rented out for a total of about $16.50 a month — a practice he continued until he left to attend the U.S. Naval Academy in Annapolis, Maryland. “I learned how to be a carpenter by repairing those houses,” he said.

As for his personal tastes, Carter prefers his peanuts slightly salted, while former First Lady Rosalynn Carter likes hers unsalted. “We also disagree on whether peanut butter should be smooth or chunky,” he said. “Despite that we’ve been married 71 years.”