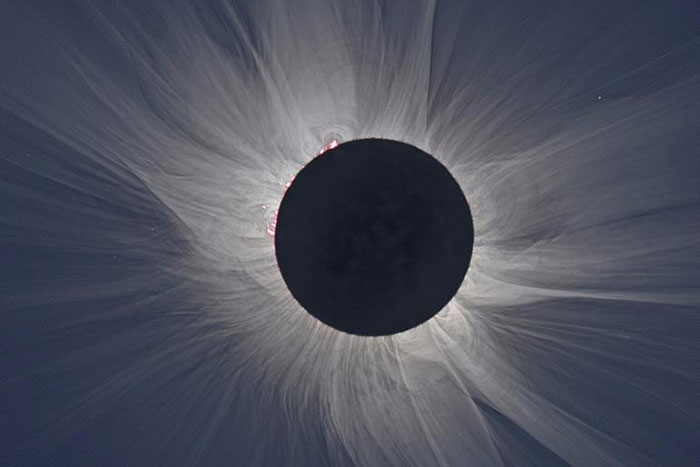 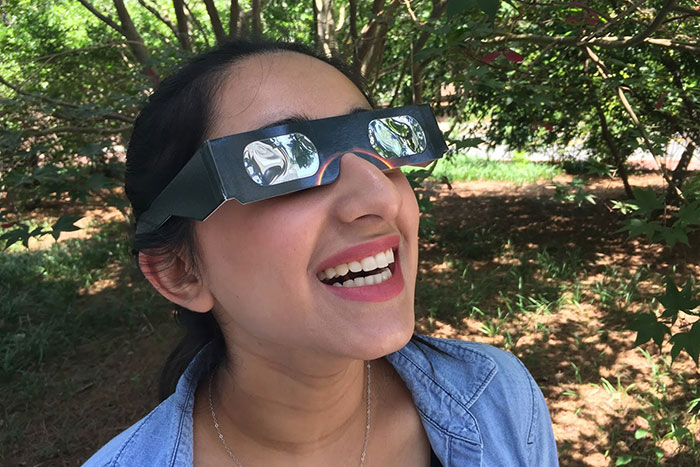 Emory senior Raveena Chhibber tests out a pair of solar eclipse glasses. The neuroscience and behavioral biology major is on campus this summer working in a psychology lab and plans to take a break to witness the celestial event. 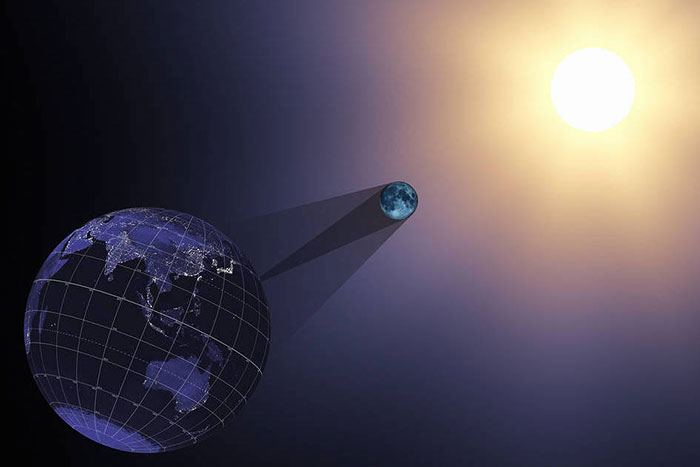 "An eclipse is a chance to stop and perceive and reflect," says Emory astronomer Erin Bonning. "It proceeds slowly and deliberately, which is not exactly the pace of modern society." (NASA graphic) 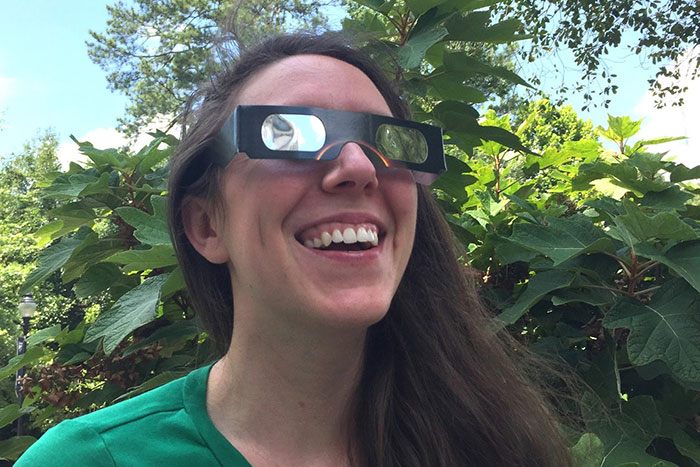 Psychology graduate student Katy Renfroe will pause from working on her thesis to observe the partial eclipse on campus.

The Emory University Class of 2021 already has a unique distinction: The campus orientation day for the first-year students will occur beneath a nearly total solar eclipse. From about 2:38 to 2:41 p.m. on Monday, Aug. 21, the moon will cover 97.7 percent of the sun over Atlanta.

A couple of solar telescopes will be set up on the roof of the Mathematics and Science Building between 1 and 4 p.m. for staff, faculty, students and their family members who want to observe the sun through them — weather permitting. But a pair of certified solar eclipse glasses, a simple pinhole camera — or even the leaves of a tree — will also make it possible to safely view the eclipse anywhere on campus where the sun is visible.

Emory first-year students plan to gather on the Quad between 2:15 and 3 p.m. for eclipse watching. At the Oxford campus, first-year students will gather in front of the Oxford Science Building starting at 2 p.m. where there will be music, a solar telescope and sun-themed snacks and drinks. The Emory Police Department will also host group eclipse viewing on the field of the Student Activity and Academic Center at the Clairmont Campus. All students, faculty and staff are welcome to attend these events.

Atlanta Science Tavern has also compiled this list of solar eclipse events in and around Atlanta.

A total solar eclipse will sweep across a 70-mile-wide area of the United States, starting on the Pacific coast of Oregon and continuing all the way to South Carolina and the Atlantic Ocean. Even though Atlanta lies just beyond the path of totality, if the weather is clear the near-total eclipse will be worth pausing from work or school to go outside and experience.

To begin with, it’s rare. The last time the sun over Atlanta was nearly obscured by the moon was on May 31, 1984, when it was 99.7 percent covered. The New York Times described what happened as the skies began to darken about 20 minutes after noon: “The temperature dropped six degrees, flowers closed their petals, dogs howled, pigeons tucked their heads under their wings as if to sleep and the whole city was bathed in a kind of diffused light, not unlike that accompanying the approach of a severe storm.”