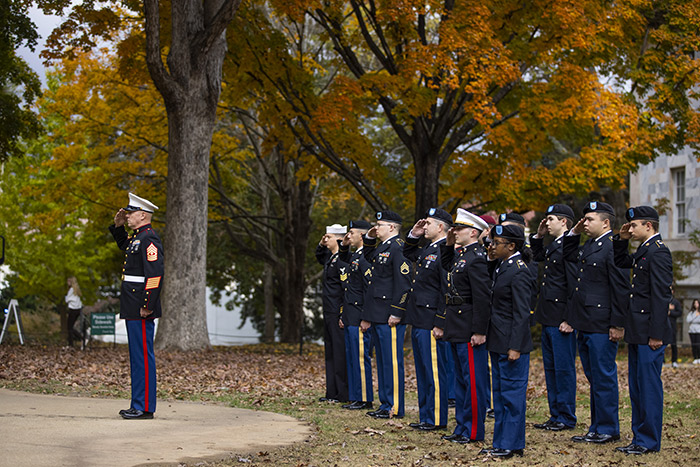 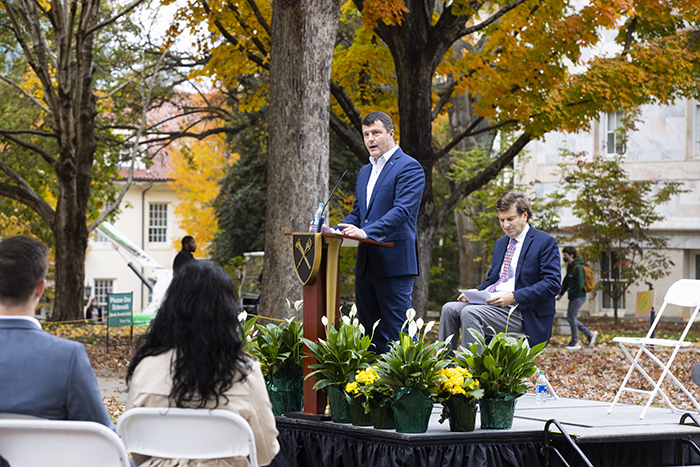 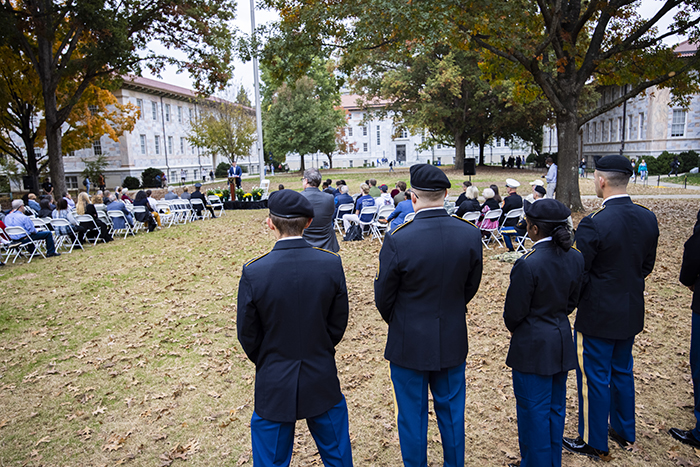 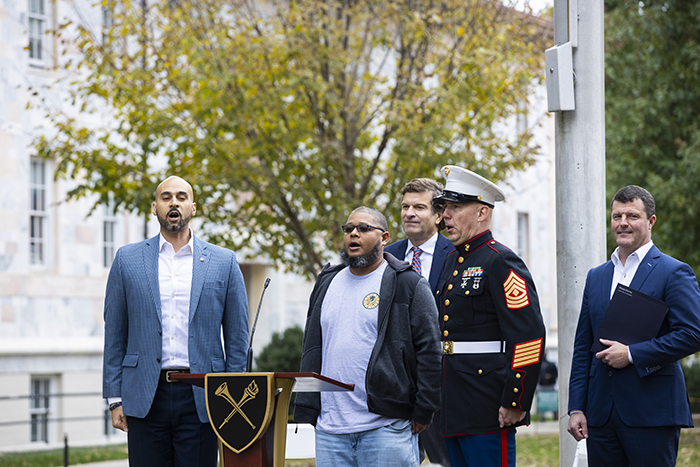 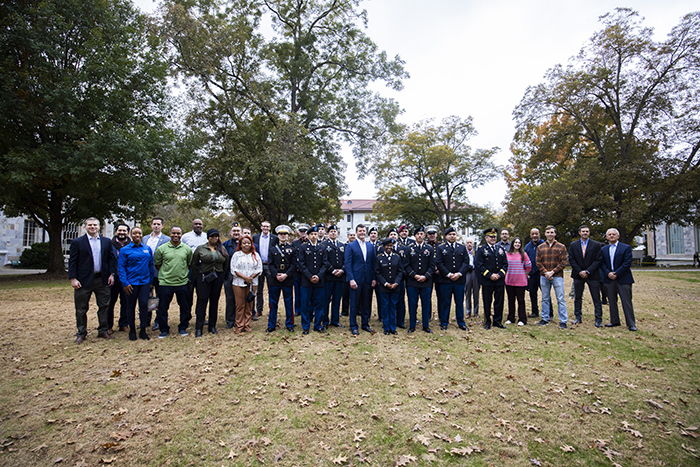 The American flag waved against a pale gray fall sky as Emory faculty, staff, students and alumni gathered Nov. 11 on the Quad for the annual Veterans Day ceremony.

Emory pays tribute to veterans and their leadership Nov. 12, 2020

Veterans in the civilian workplace focus of community conversation at Emory Mar. 21, 2019

The American flag waved against a pale gray fall sky as the Emory community gathered Nov. 11 on the Quad to celebrate Veterans Day.

The 13th annual commemoration began with the Honor Guard, which consists of veterans and ROTC cadets, marching to the flag under the command of retired U.S. Marine Corps Reserve 1st Sgt. Andrew West, executive center administrator for the Georgia Clinical and Translational Science Alliance.

Jeff Rosensweig, Goizueta Business School associate professor of finance and founding faculty sponsor for the Emory Veterans Association, welcomed attendees. He initiated a round of applause for all who served.

At 11:11 a.m., attendees observed a moment of silence for Armistice Day. The international holiday marks the end of World War I hostilities at the 11th hour of the 11th day of the 11th month.

This year’s guest speaker was Max Hilsman, a U.S. Army veteran who is the executive director and private wealth management regional manager at Morgan Stanley. Hilsman, who also leads veteran recruiting for Morgan Stanley in Atlanta, has a history of mentoring veterans during the transition from soldier to civilian. He directed his remarks toward student veterans about how their military skills translate to civilian life.

“Others will look up to you as leaders to set the appropriate cadence for work ethic,” Hilsman said in his remarks. “When you were the military, you stopped work only when the mission was complete, not when the clock said it was time to stop. Your next career is no different.”

He also identified three areas where veterans excel: (1) Creating order out of chaos (2) Communicating across rank in any situation and (3) Building strong relationships. Hilsman also encouraged veterans to use their skills to improve their communities.

“As you seek to develop an identity outside of your past military service, I’ll ask you just one favor: give back,” Hilsman said. “America needs more from you. We need leaders of character who are committed to a lifetime of service to this great nation.”

The ceremony ended with the crowd singing the Armed Forces Medley, which consists of the service songs of each branch of the military. When it was time for the “Marines’ Hymn,” a group of Marine Corps veterans comprised of Emory staff and alumni took to the stage to sing and show up their peers in other branches of the armed forces.

Faculty, staff and student veterans attended the ceremony to reflect on what Veterans Day means to them.

Alex Horn, an MBA student in the Goizueta Business School, said the Emory Veterans Association gave him a community.

“Emory does a great job of bringing vets to the program,” noted Horn, who served in the U.S. Army. “When I got here, they paired me with another veteran, and it helps you bond quickly over shared experiences. To have a veteran there to talk to and bounce ideas off of is really phenomenal.”

“I like that Emory honors veterans and I’m proud of my service,” said Lacy. “It’s nice to be around those who you’ve served with. I was blessed to be in the Air Force for 10 years and now at Emory for 17 years. I couldn’t be prouder of the opportunity for both.”

Jose Holguin-Cruz, who served in the Marine Corps for eight years, said that he came to work at Emory four years ago because of the university’s reputation for helping veterans. He said one of his friends got hit by an improvised explosive device in combat, and Emory was one of the few places doing research to help veterans regain neurological skills after brain injuries.

“I attend the Veterans Day ceremony every year to honor those of us who don’t make it back and to honor the families who do so much while we’re gone,” explained Holguin-Cruz, who works in the Office of Information Technology. “For those kids who may never know their parents or the family members they have lost, it’s good for them to see that tradition. It’s also good to have a day for those who are currently serving to know they are not forgotten.”

There are initiatives for veterans across the Emory community.

“There are some wounds that are invisible. Someone can be dealing with something and not know where to turn and you may not know they are dealing with it,” said U.S. Navy veteran Imarii Poindexter, who attended the ceremony and is an outreach coordinator for the program. “The Navy gave so much to me, so I wanted to give back to other service members, because when you’re in the military it’s all about camaraderie.”

In addition to health services, Emory University offers financial assistance to veterans through the Yellow Ribbon program. This funding helps post-9/11 veterans pay for educational expenses beyond what is covered by the G.I. Bill.

Undergraduate students planning military careers can participate in Army or Air Force ROTC through a cross-enrollment agreement with Georgia Tech. Students complete their undergraduate degrees at Emory and military training at Tech.

Emory’s Nell Hodgson Woodruff School of Nursing is one of 18 nursing schools nationwide selected for the elite Veteran Affairs Nursing Academic Partnership (VANAP) through the U.S. Department of Veterans Affairs. Undergraduate and graduate nursing students selected for the program gain valuable training in providing quality care for our nation’s veterans.

The Emory Law Volunteer Clinic for Veterans provides pro bono legal services for veterans, assisting them and their families with legal issues including disability claims before the Veterans Administration and subsequent appellate proceedings, estate work and discharge upgrades before the Department of Defense.

Learn more about support for veterans at Emory.

Emory Inspired: Reducing the distance from farm to table