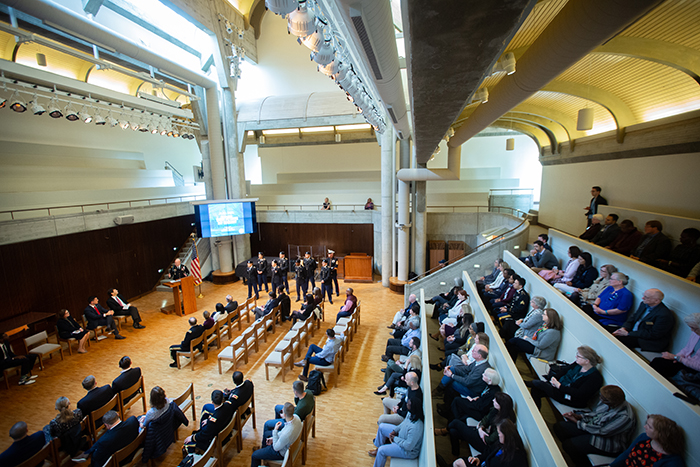 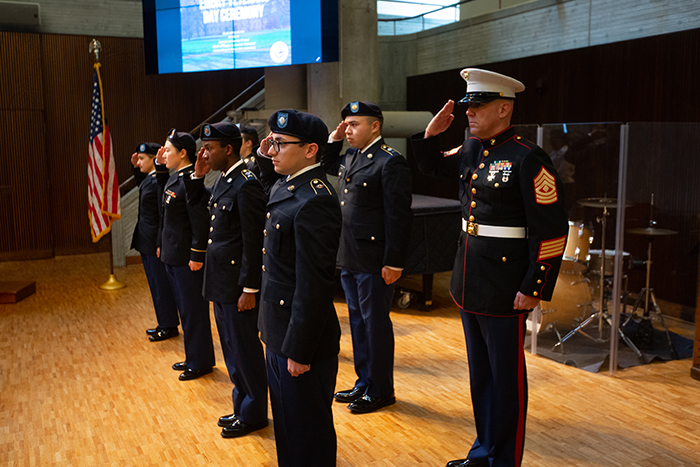 The ceremony began with an honor guard of ROTC cadets. 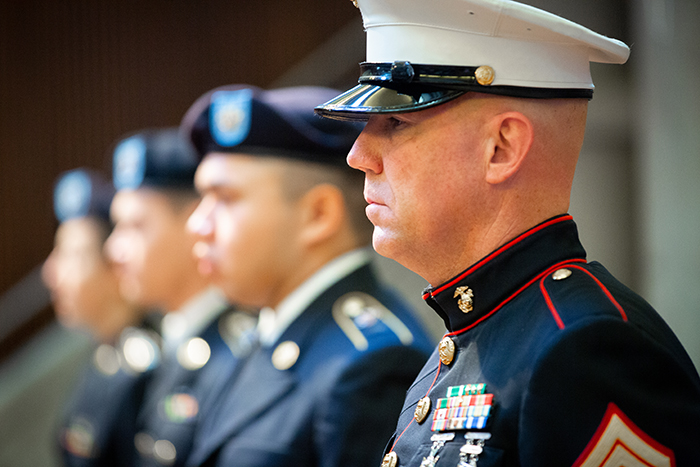 The honor guard was under the command of U.S. Marine Corps 1st Sgt. Andrew West, senior center administrator for the Georgia Clinical and Translational Science Alliance. 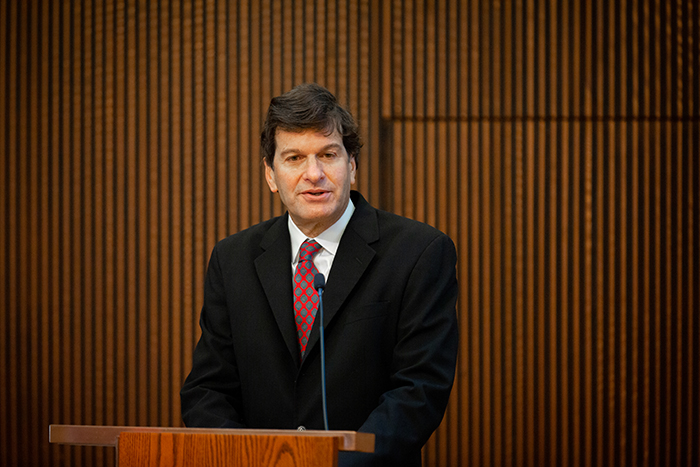 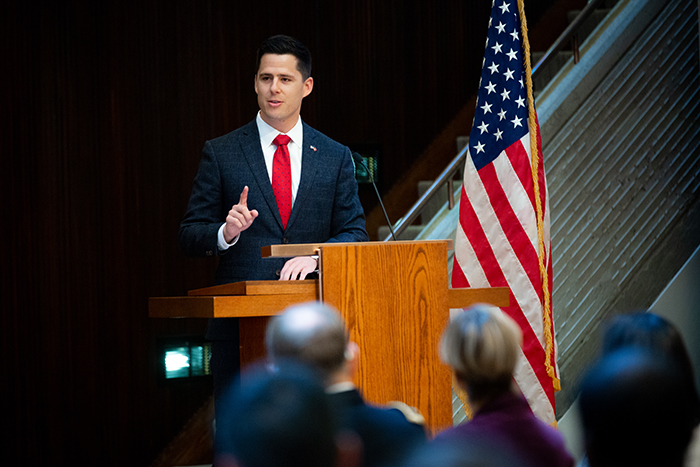 Veteran Tyler Freeman is an MBA/Juris Master dual-degree candidate at Goizueta and Emory Law and president of Emory Veterans Association. “Veterans and military-affiliated populations at Emory are thriving in every school,” he said. 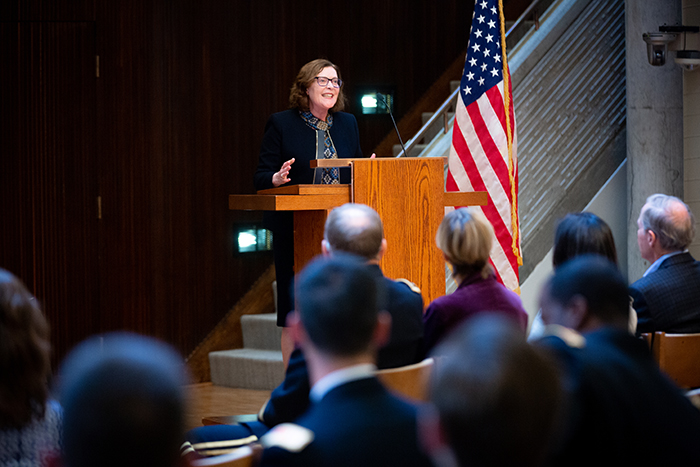 Emory President Claire E. Sterk thanked veterans for their service and spoke of Emory's commitment to veterans as students and in the community. 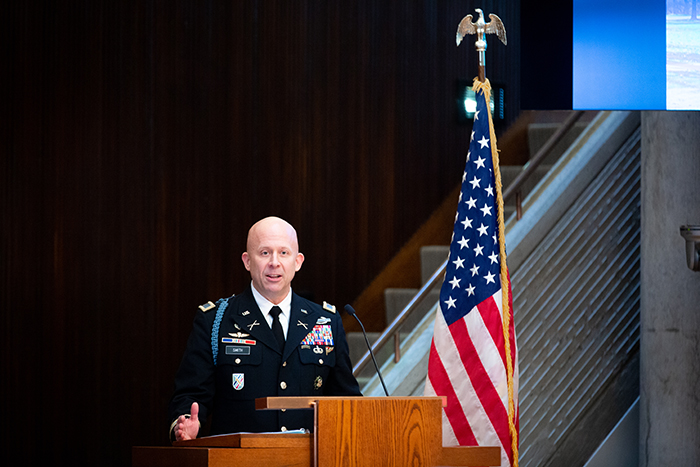 Keynote speaker and Emory alumnus Col. Matt Smith thanked President Sterk for the work Emory is doing, both now and in the future, for veterans’ communities. 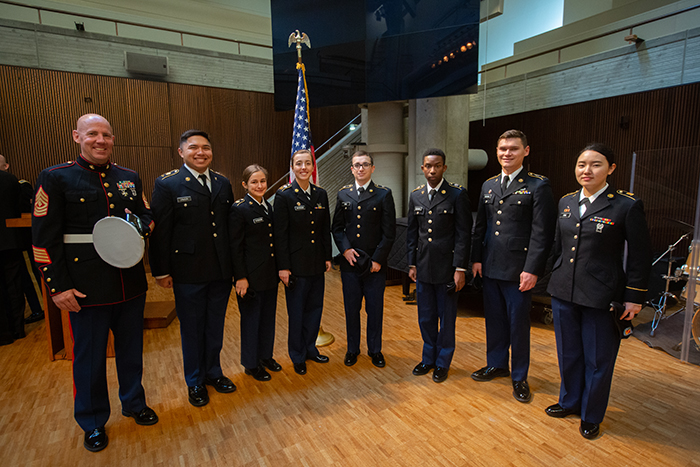 The honor guard posed for pictures at the conclusion of the ceremony. 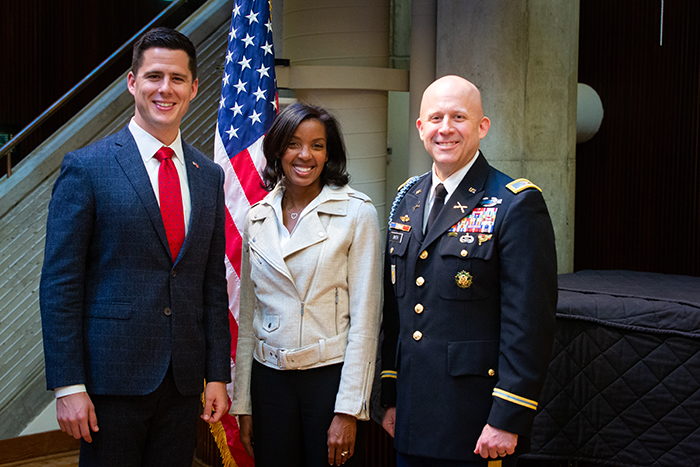 Members of the Emory community took time Monday to honor the service and sacrifices of veterans and those currently in the U.S. military.

The university’s 11th annual Veterans Day commemoration was held in Cannon Chapel. The event began with Emory’s ROTC Cadet Cadre Honor Guard processing to the flag at the front of the chapel, under the command of U.S. Marine Corps 1st Sgt. Andrew West, senior center administrator for the Georgia Clinical and Translational Science Alliance.

Jeff Rosensweig, Goizueta Business School associate professor of finance and founding faculty sponsor for the Emory Veterans Association, welcomed attendees. He gave special thanks to the Emory Police officers present, noting that many in the department are veterans.

He also stressed that leaders such as Lt. Gen. Ken Keen, associate dean of leadership at Goizueta, have made Emory’s increasing prominence as a destination of choice for veterans possible. Keen came to Emory following a 38-year career in the U.S. Army. Shortly after arriving at Emory, he began working with Julie Barefoot, associate dean of engagement and partnerships at the business school, to improve veteran access and recruitment.

“This is a wonderful day,” Freeman told attendees. “Through the consistent efforts of so many, veterans and military-affiliated populations at Emory are thriving in every school. Anyone can find us anywhere, permeating throughout this university. We’re here, and it’s not an accident.

“It’s been a privilege and honor to see so many powerful events unfold, through intentional, impassioned and unapologetic advocacy of each and every person who has worn the cloth of our nation and by an untold number of those who haven’t,” Freeman added. “It’s because of those people and their relentless commitment to our cause that we’re able to be here today.

“As military-affiliated women and men, we know that you all see, respect and appreciate who we are and the value that we bring.”

Freeman concluded his remarks at approximately 11:11 a.m. Rosensweig invited attendees to observe a moment of silence to mark when the armistice ending World War I took effect “at the eleventh hour of the eleventh day of the eleventh month” in 1918.

Rosensweig then introduced Emory University President Claire E. Sterk, who noted that while she takes the institution’s commitment to veterans very seriously, respecting veterans also is personal for her.

She shared about growing up near the only American cemetery and memorial in the Netherlands. She would go there with her father, who was himself a veteran, and clean grave markers. The experience left a lasting impression on her.

“I am amazed at how people come back from serving and build a life in the normal flow,” Sterk said. “Everyone here today recognizes how much service members sacrifice on behalf of all of us. We know that when you return home, you never really stop serving. It is always part of your life.”

“We really must be relentless in our efforts to be sure that Emory reaches out, that we support our veterans and service members,” she added. “We must recognize the hard work that takes place and give back to the people who have done so much for us.”

Emory has several initiatives in place to help give back to veterans.

Sterk intends to continue building on these and other efforts to assist veterans.

“On behalf of the entire Emory community, thanks to you and your families for your service,” she concluded. “We are very honored to be part of your next chapter.”

Thanking veterans and Emory for their work

He took time during his address to recognize the veterans in attendance, based on their time of service. The number included Sterk’s husband, Emory public health research professor Kirk Elifson, who served in the Army during the Vietnam War.

“None of our service has been in vain, though we might not know it at the time,” Smith said.

Smith met his wife, Laura, who also is a Goizueta MBA graduate, during their time at Emory. He also asked if anyone present had family members who have served, saying that the sacrifices families make are also important to recognize. He encouraged those serving to always share any thanks they receive with their families as a way to “pay it forward.”

Smith thanked Sterk for the work Emory is doing, both now and in the future, for veterans’ communities. “I am certain that I would not be where I am today without the experience of Emory,” noted Smith, who is being promoted to brigadier general later this year.

Veterans Day at Emory is sponsored by the Emory Veterans Association, Employee Council and the Office of the President.

Understanding the history of slavery in the Americas