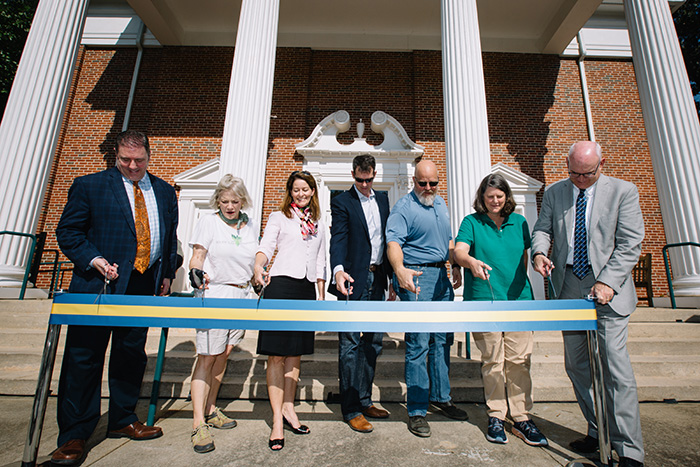 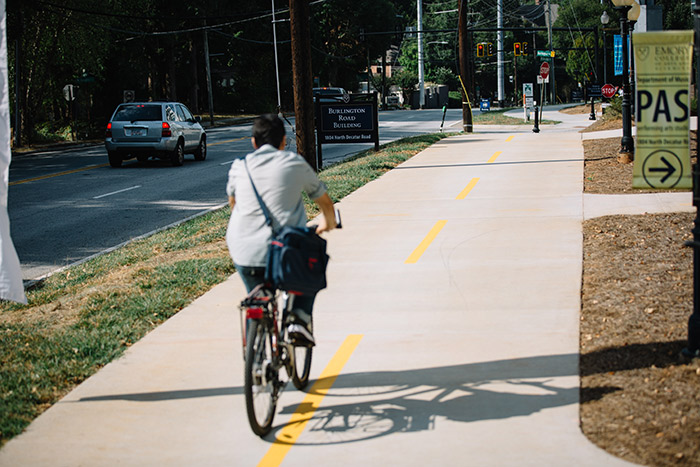 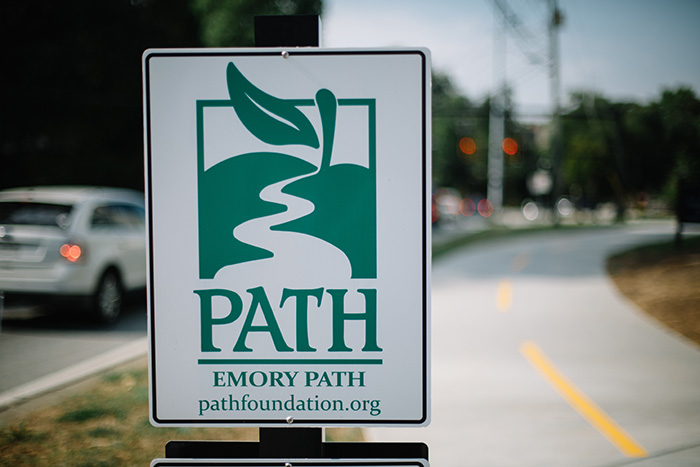 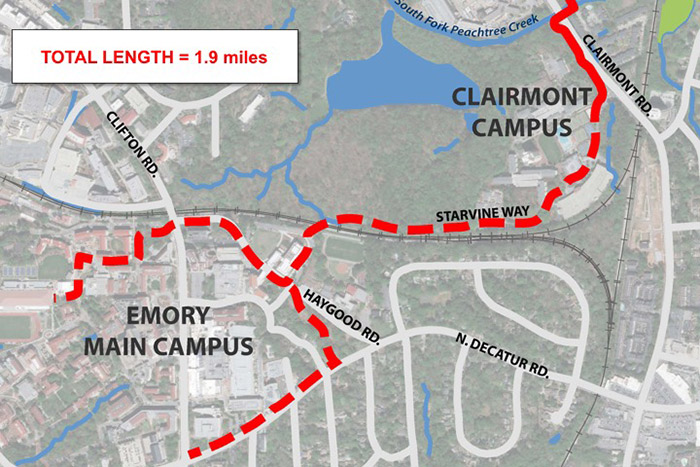 Created through a partnership between Emory and the PATH Foundation, two new sections of a traffic-restricted, multi-use trail system expand options for cyclists and pedestrians. One of the newly completed segments runs from Ridgewood Drive to Clifton Road, and the other two-lane segment follows Haygood Drive from Druid Hills High School and Andrews Drive to Clifton Road.

As traffic spun past on North Decatur Road, members of the campus and neighboring communities gathered outside Emory’s Performing Arts Studio on Friday, Sept. 27, to celebrate the completion of two new sections of a multi-use trail system that expands safe, off-road options for cyclists and pedestrians.

Created in partnership between Emory University and Atlanta’s PATH Foundation, the new dual lane bicycle-pedestrian paths are part of a larger plan that will eventually connect the South Peachtree Creek PATH trail system directly to the campus core.

Both projects allow cyclists and pedestrians a route to campus that takes them out of traffic on busy, urban streets, said Ciannat Howett, director of Emory ‘s Office of Sustainability Initiatives.

The projects were completed over the summer and represent the latest advances in what Howett describes as “a broader vision for bike and pedestrian trails across Emory’s campus.”

“Emory’s sustainability vision calls for enhanced options for safe biking and walking on campus and connections to existing and proposed trail networks,” Howett told attendees at Friday’s event. “These trails enhance the health and wellbeing of our students and employees and encourage sustainable commuting.”

“We celebrate each of these steps because this is how we see progress being made,” she added.

Howett noted that it was especially fitting that the celebration took place during Climate Week 2019 and in conjunction with the United Nations Climate Action Summit. “As we work together to reduce our fossil fuel use, we hope these trails will reduce vehicular traffic and make biking more inviting for our community members,” she said.

“This is a climate solution,” Howett noted. “It’s not talk, it’s action. And it’s the kind of thing we plan to do even more of at Emory.”

Planning for the project began nearly three years ago with a working group comprised of Emory faculty, staff and students and volunteers from the city of Atlanta, DeKalb County, the Centers for Disease Control and Prevention, and regional bike and pedestrian advocacy groups.

Members met monthly for more than a year to examine bike and pedestrian connectivity across the Emory campus, shaping a vision and identifying future steps. Key to that effort was a strong partnership between Emory and the PATH Foundation, a non-profit that has built an extensive network of bike/pedestrian trails throughout metro Atlanta.

“We are so grateful to the PATH Foundation for bringing its robust trail system to Emory,” Howett noted.

Jonathan McCaig, PATH project manager, said the foundation is proud to partner with Emory and congratulated the university on its commitment to embedding bike/pedestrian trails within its master plan.

“Retrofitting trails through an urban environment like Emory University is not easy — it’s a lot of give and take,” McCaig said. “I’m proud of our planning and design teams. We found a way to connect this trail to serve Emory students, faculty and the surrounding neighborhoods.”

In fact, he added, “this is the closest (PATH) trail to my house. I hope to use it with my one-year-old daughter, Maddie.”

‘More trails on the way’

Earlier this year, Emory and the PATH Foundation announced efforts to extend that campus connectivity with even more trails, including the two segments completed this summer. Moving forward, plans call for construction of another Emory PATH segment across from Druid Hills High School that will link the two recently completed sections.

The multi-use trail that now runs along Haygood Drive also will be extended to the west side of Clifton Road, where it will continue past the Woodruff Health Sciences Center Administrative Building onto Means Drive.

There, a dedicated path will parallel the pedestrian bridge and angle past the north end of the new Emory Student Center before terminating at the Woodruff Physical Education Center, said David Payne, associate vice president of planning and engagement.

“There are more trails on the way,” Payne confirmed. “Later this year we will begin work on new trails through the Clairmont Campus.”

“In total, by this time next year we will have added nearly two miles of off-road, multi-use trails at Emory,” he added, acknowledging the many campus and community leaders whose work has made the projects possible.