The PATH at Emory opens to acclaim 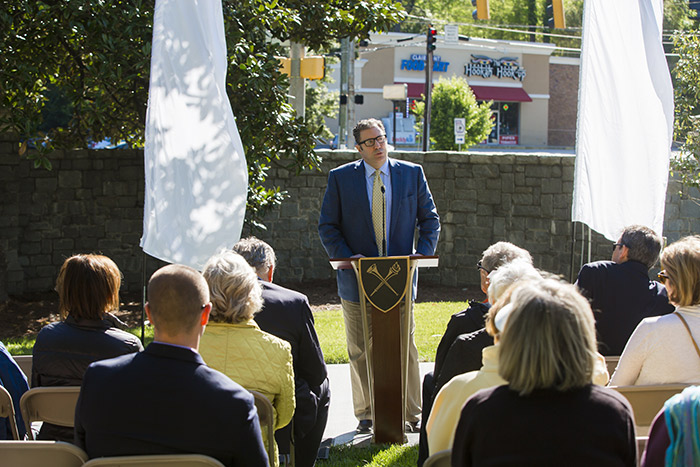 David Payne, senior director of operations in Emory’s Office of the Executive Vice President for Business and Administration, spoke Friday, April 20, at the opening of the PATH at Emory. 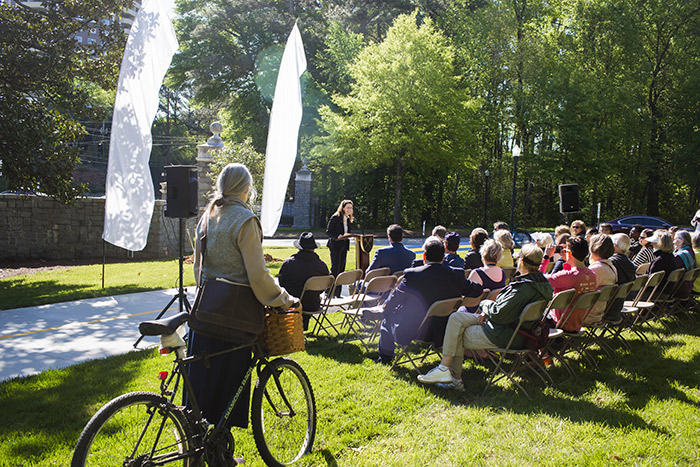 Emory professor Erica Duncan watched the ceremony from her bike. The new path will make her bicycle commute both safer and faster, Duncan said. 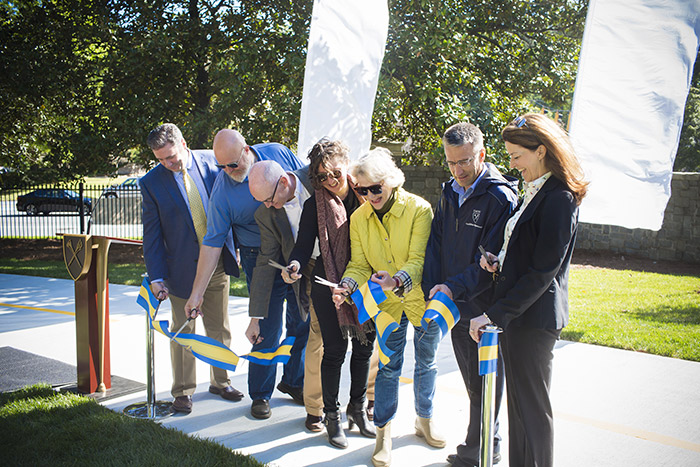 Representatives of Emory, the PATH Foundation and the City of Atlanta cut a ribbon to officially open the new path. 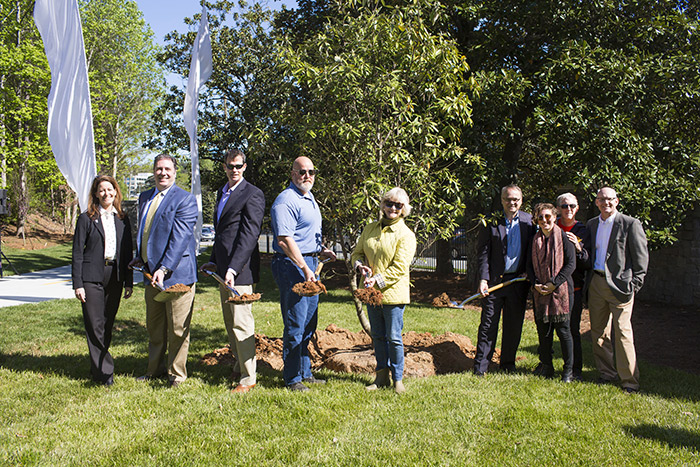 They also planted a magnolia tree near the entrance to Emory’s Clairmont Campus to commemorate Earth Day, which was Sunday, April 22. 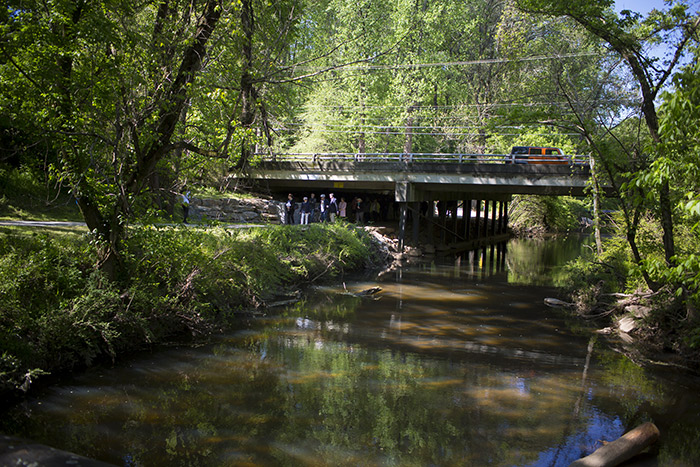 After the ceremony, attendees walked along the new pedestrian and bike trail, which passes under Clairmont Road, allowing users to avoid traffic on the busy thoroughfare.

Emory kicked off Earth Day weekend Friday with a ceremony to mark the grand opening of the PATH at Emory, a new bicycle and pedestrian trail that will eventually link Emory’s Clairmont Campus to a scenic, off-road trail system that stretches to North Druid Hills Road.

Developed through a partnership with Emory and the PATH Foundation, an Atlanta non-profit that has built a network of trails throughout metro Atlanta, the new trail offers bicyclists and pedestrians a new, safer route to campus, says David Payne, senior director of operations in Emory’s Office of the Executive Vice President for Business and Administration.

“For hundreds of faculty, staff and students, this is a way to get to work without driving,” said Payne, who thanked both the PATH Foundation and the many hands throughout Emory and metro Atlanta that made the trail possible.

The expansive 12-foot-wide, paved trail replaces a previous section of narrow sidewalk that bordered the west side of Clairmont Road. The trail heads north, then passes under the busy roadway before emerging on the other side near the Clairmont Reserve apartments, where it will eventually connect with the larger PATH trail system.

The new section is part of the PATH Foundation’s multi-phase South Peachtree Creek Trail. The next portion of the trail under development, scheduled for completion later this summer, will follow South Peachtree Creek past Clairmont Lake before branching out toward both Medlock and Mason Mill parks.

“I don’t think we have been more proud of a PATH system than we are of this one,” said Ed McBrayer, executive director of the PATH Foundation, who rode to the ceremony on a bicycle, happily apologizing for his “helmet hair.”

“This is one of the most important and significant commuter-type trails that PATH has built since we started,” said McBrayer, who predicted the trail could eventually draw more than 1,000 users a day.

Becky Katz, chief bicycle officer for the City of Atlanta, acknowledged both Emory and the PATH Foundation for their leadership in advancing alternative commute options in Atlanta.

“You have seized the moment at the right time,” said Katz. “We get to inherit your leadership.”

She thanked Emory faculty, staff, students and administrators, as well as representatives from DeKalb County, the City of Atlanta, the Centers for Disease Control and Prevention (CDC) and area bicycle and pedestrian advocacy groups, for their ongoing work with the project, which was four years in the planning.

As officials cut a ribbon to officially open Emory’s portion of the new trail — followed by the planting of a magnolia tree near the Clairmont Campus entrance in recognition of Earth Day — Erica Duncan, a professor in the Department of Psychiatry and Behavioral Sciences in the Emory School of Medicine, glided up to the gathering on her bicycle.

Duncan, who lives east of Clairmont Road, said that she’s been biking to work year-round since she came to Emory in 2000. Having a paved trail that opens a route under Clairmont Road will make “a huge difference,” predicted Duncan, who regularly bikes to both Emory and the Atlanta Veterans Affairs Medical Center, where she is director of the Psychophysiology and Cognition Laboratory.

“I ride my bike to work virtually every day and go running here on the weekends,” she said. “I’ve actually had cars brush me as they drive past when I ride in the road.”

But with the new trail, not only does Duncan avoid those daily traffic battles, she’s able to shave several minutes off her regular 10-minute commute to campus.

Following the ceremony, Payne led attendees on a short walk down the new pathway towards the South Fork of Peachtree Creek. To widen the trail, the previous sidewalk was removed and soil was cut away to extend the path away from traffic.

Large chunks of granite unearthed during the excavation were repurposed; some appear as landscaping features along the trail, others now reinforce earth around the bike/pedestrian tunnel, said Payne.

There are no plans to extend the trail into nearby Lullwater Preserve, he noted.

Beneath Clairmont Road, earthwork was completed along the streambank to enhance the water flow of South Peachtree Creek, which can vary with the seasons, he said. For safety, large motion-sensor lights, soon be operational, will illuminate the trail at night as it passes under the road.

Standing inside the tunnel, an area that once served as a catch-all for road debris and litter, the nearby traffic softens to a dull, rumbling whisper as the dark waters of South Peachtree Creek glide quietly past.

Nearby, visitors wandered over to inspect early work on the next construction phase, which is already under way, murmuring their approval and anticipating the day when all of the trail segments are completed, connected and open to the community.