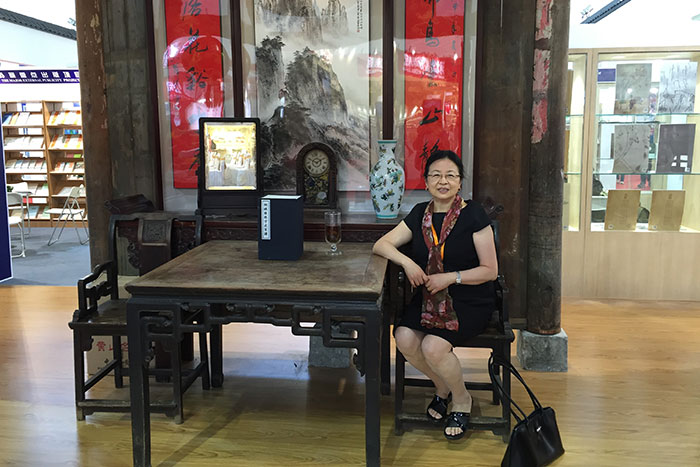 Chinese Studies librarian Guo-hua Wang sits at the entrance to the booth of her native province of Anhui, which is decorated like the living room of a home, at the Beijing International Book Fair last year. Photo courtesy Guo-hua Wang. 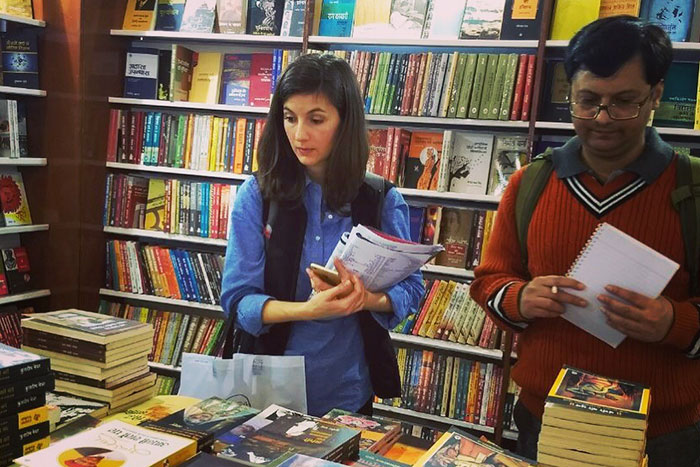 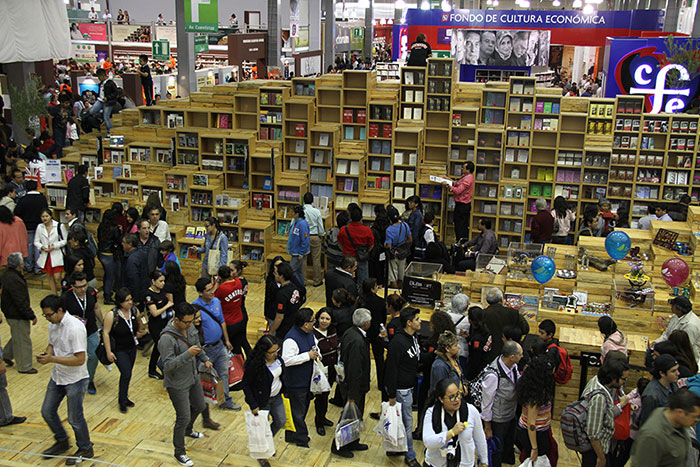 When it comes to buying books about another country’s literature, history, government and myriad other issues, there’s no better way of knowing you’re getting the best offerings than traveling right to the source.

That’s what four Emory librarians on the International Area Studies team did over the past year when they traveled to Spain, Argentina, Mexico, Brazil, China, India and Japan to purchase books for collections used by students and faculty.

The trips marked the first time the team was given the opportunity to travel overseas to make direct collection purchases as part of its normal work practice. This first-hand experience also exposed the team to the cultural and political environment of these countries, which strengthens their work with Emory scholars.

“Our librarians have good relationships with the faculty in these departments,” Cooper says. “Not only are these book-buying travels beneficial to the library by having our librarians in these dynamic environments and strengthening our collections with quality materials, but faculty are able to request specific books that the librarians are often able to find and bring back for them. We’re proud they are able to serve the faculty and students in this capacity.”

Ambrosone acquired 157 titles in Hindi, English and Malayalam, including autobiographies, works of literature and books that will fill gaps in the Tibetan collection. During her trip, she also toured the Library of Congress office in New Delhi, visited both a small and large book vendor, and traveled to Kerala on the southwest coast of India, collecting additional works in Malayalam.

Prior to her trip, Ambrosone contacted faculty in Middle East and South Asian Studies and the religion and history departments, announcing her book-buying trip and asking people to forward any requests they had.

“I had an amazing response from faculty. They were very enthusiastic about my going,” Ambrosone says. “I had a healthy wish list from them before my trip.”

Lawrence Hamblin, Japanese and Korean Studies librarian, attended the Library Fair and Forum in Yokohama, Japan in November. There, he learned about the Japan Atomic Energy Agency Library, which houses the Fukushima Nuclear Accident Archive, a repository of news and information on the March 2011 disaster caused by an earthquake and tsunami.

He also attended panel discussions and learned about several issues affecting libraries and other institutions in Japan, including the effect of population on libraries (an aging population and low birth rates have led to “disappearing cities” in some areas); the potential merging of some public libraries and cultural heritage institutions; and the relationship between digital archiving and community development.

His main purpose for the Japan trip, however, was to search for rare Japanese books to add to Emory’s collection. He visited a few rare book stores in the Jinbocho district in Tokyo and discovered that they each have different specialties; for example, one rare book store he visited carried illustrated books, which currently wouldn’t be useful for Emory’s collection.

“You really have to know what you’re looking for or you can waste a lot of time, which is why before I return, I would have to do a lot of research about what our faculty hope to use in their courses” and where to find those books, Hamblin says.

Latin American Studies librarian Phil MacLeod traveled to Spain, Argentina and Mexico to purchase books. At the Guadalajara International Book Fair in Mexico, he stayed for five days, making sure he was at the booths by 9 a.m. for the best selection, “like a fishmonger,” he says. His day wouldn’t end until 7 or 8 p.m.

“Nothing beats seeing the books firsthand,” says MacLeod. In his previous trips, he’s found books at the fair he was considering buying from a vendor catalog that, after examining them in person, he decided would be poor choices.

Another advantage is being able to pay Mexican prices at the book fair. MacLeod says the books he purchased at the Guadalajara book fair last year averaged $13 each, saving the library the ordering markup of 150-200 percent.

“Even with shipping expenses, it’s a great cost savings for our library,” MacLeod says.

Wang, the Chinese Studies librarian, attended the Beijing International Book Fair during her trip to China last August. The venue was enormous, featuring more than 2,000 exhibitors from 80 countries, and each Chinese province had a room instead of a booth, with the entrance decorated in a style that reflected its culture.

While she was there, Wang also attended the International Conference on Integrated Development of Digital Publishing and Digital Libraries in Taiyuan, and visited a publisher in the Forbidden City that is publishing artwork from that area. She also met with publishers of Chinese local history and learned from them about a government-funded online resource of local histories of the state, province, city and counties. This database of local history can be accessed by Emory faculty and students for free.

The librarians had different experiences getting their selections back to the Woodruff Library. At the Beijing book fair, booth staff members scanned the titles Wang chose and emailed the information to her, so that after she returned, she could have the collection management staff check for duplicates and place an order if the book isn’t part of the collection already.

The process isn’t as orderly at the Guadalajara book fair; armed with a pre-printed collection list from Woodruff, MacLeod ensured his choices weren’t already owned by the library before he purchased the books, then boxed them up and made the shipping arrangements himself.

But all four librarians agree that seeing the books in person helps the decision-making process.

“When you actually see the book, your thoughts might be changed, rather than just reading about it in a catalog. It’s a very interesting, very useful experience,” Wang says.