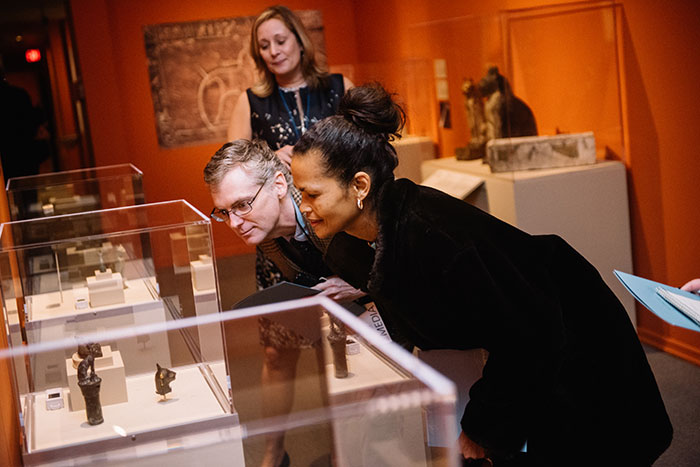 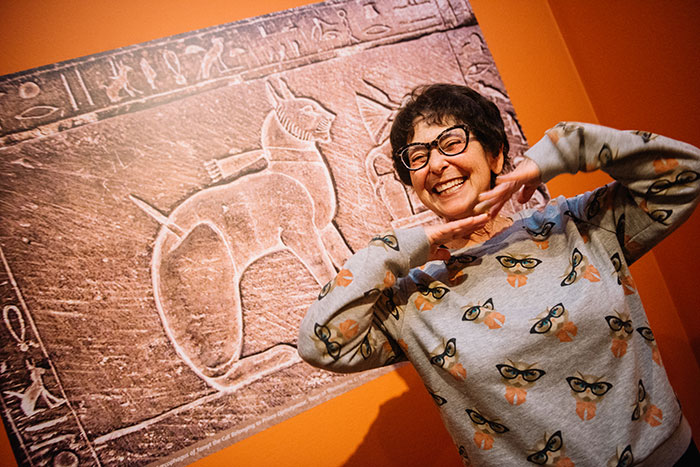 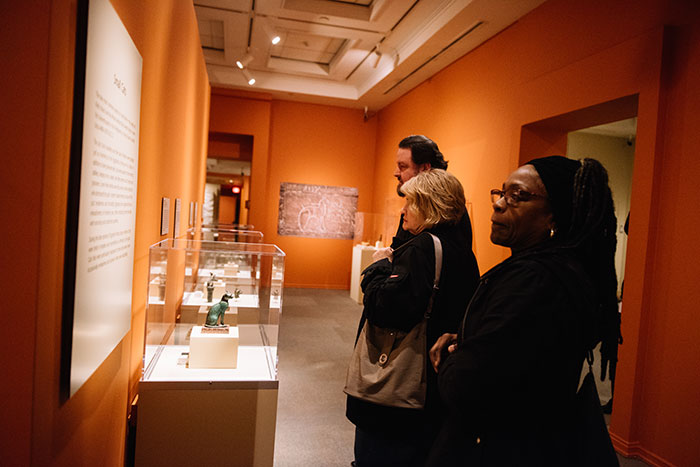 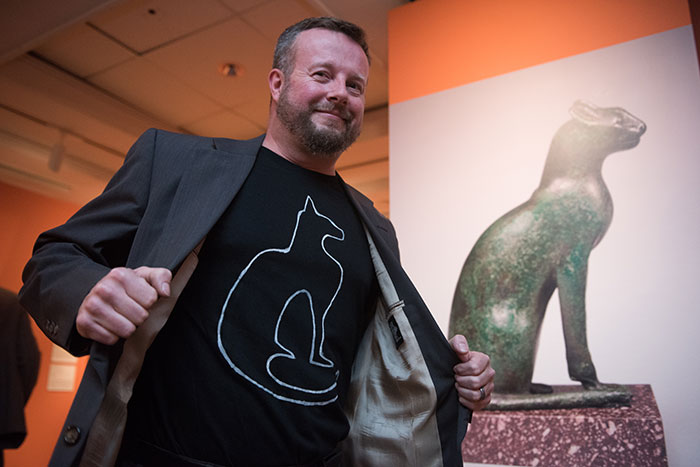 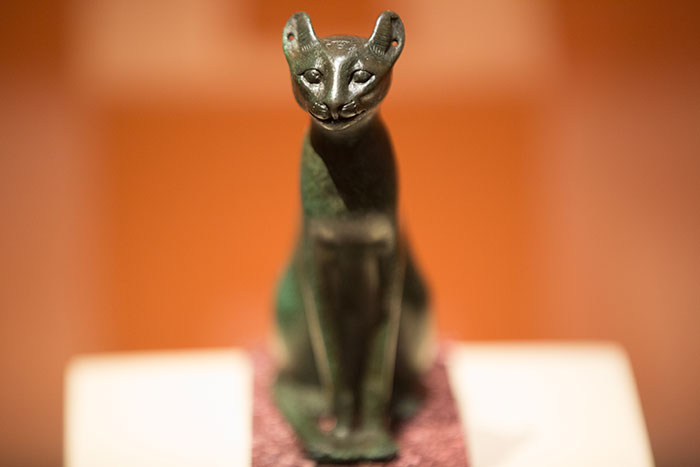 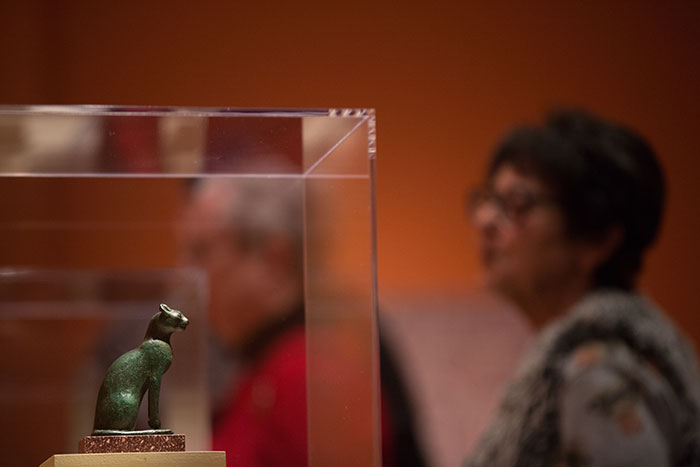 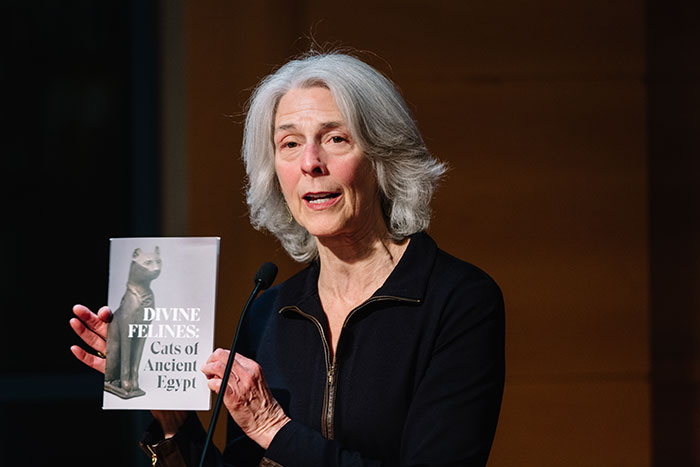 After a preview event on Feb. 8, “Divine Felines: Cats of Ancient Egypt” opened to the general public Feb. 10 at the Carlos Museum. The exhibition showcases cats and lions, plus dogs and jackals, as domesticated pets, creatures of the wild and mythic symbols of divinity. Emory Photo/Video

“In ancient Egypt, cats and dogs were gods, and they have not forgotten this!” says Melinda Hartwig, curator of Ancient Egyptian, Nubian and Near Eastern Art at the Michael C. Carlos Museum.

That exalted stature is illuminated in the exhibition “Divine Felines: Cats of Ancient Egypt,” which opened Feb. 10 at the museum and will be on view through Nov. 11.

The exhibit showcases cats and lions, plus dogs and jackals, as domesticated pets, creatures of the wild or mythic symbols of divinities, in ancient Egyptian mythology, kingship and everyday life. Animal burial practices and luxury items decorated with feline and canine features are also on display.

The kings of Egypt were associated with the lion, thus, the human head on the lion’s body or the sphinx.

“Cats were first domesticated in Egypt around 4000 BC. They were lovable pets, hunters of vermin and divine embodiments of fertility and protection. Lions and jungle cats were admired for their power, and were linked with royalty and divinity,” Hartwig continues. “Dogs were also kept as pets. Their loyalty and hunting abilities were keenly valued. Often found roaming the ancient necropolises, dogs and jackals became embodiments of the gods who protected the dead.”

The exhibition’s more than 90 objects are drawn from collections of the Brooklyn Museum and the Carlos Museum. As Hartwig describes it, there are “big cats, small cats, dead cats, decorative elements and magical feline deities.” Many of the cats wear earrings.

Yekaterina Barbash of the Brooklyn Museum curated the exhibition, with Hartwig adding objects from the Carlos Museum’s extensive collection.

“The majority of objects in ‘Divine Felines’ are from the Brooklyn Museum of Art, and curated by Yekaterina (Katya) Barbash,” Hartwig says. “I wanted to expand the dog/jackal section and highlight some of our pieces like the Statuette of a Cat that was given by Charlie Chaplin to (his wife, actor) Paulette Goddard, and Katya agreed.”

“Divine Felines” examines the duality of feline nature with objects such as the large limestone sculpture of a recumbent lion (305-30 BC), a diminutive bronze sphinx of King Sheshenq (945-718 BC), a cast-bronze figurine of a cat nursing four kittens (664-30 BC), and cat-shaped wooden coffins for cat mummies (664-332 BC).

The exhibition opens with that statue of the magnificent recumbent lion in limestone with at least one subtle human feature. Also included are images of feline deities, amulets and luxury items decorated with feline features; a smaller section of the exhibition looks at the role of dogs and jackals in ancient Egypt.

With such a variety of objects on display, it’s difficult to select specific pieces that visitors should be sure not to miss.

“There are so many terrific pieces, it is hard to choose!” Hartwig says. “One is a ‘Tomb Relief of a Servant with a Dog.’ A small boy walks a dog tethered to a leash, who is described in hieroglyphs above as ‘Ebony’ — so similar to dogs’ names today like ‘Blacky.’

She also points out another piece, “Cat with Kittens,” which “shows the feline embodiment of motherly care. The fierce leonine goddess, Sakhmet, meaning ‘The Powerful One,’ is also on view. She almost destroyed mankind before her father Re tricked her to get her back in the heavens.”

Cats and community at the Carlos

In conjunction with the exhibition, the Carlos Museum’s Facebook page has been featuring postings of the cats and dogs of museum staff, patrons and the Emory community. The idea came from a discussion between Hartwig and Allison Hutton, museum communications director.

“Who doesn’t like to show off their fur babies? Each pet has their own distinct personality. The response has been overwhelming,” Hartwig says.

A number of lectures and workshops related to the exhibition are planned, including:

Check the Carlos Museum calendar for more information, as well as activities and events for children and educators.

This exhibition is made possible through support from the Forward Arts Foundation with additional support from Northern Trust.