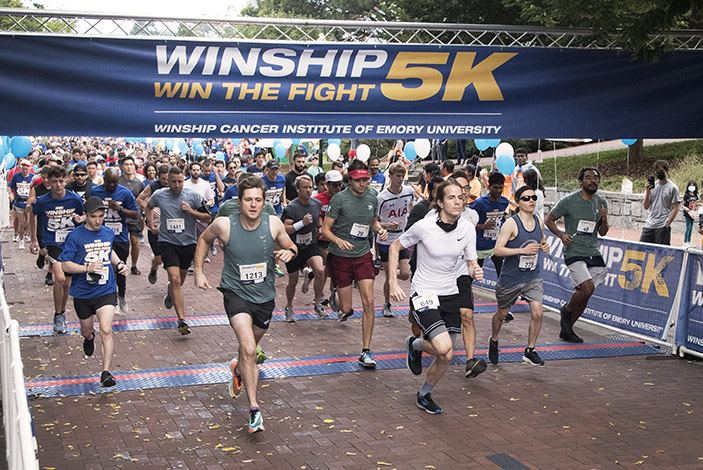 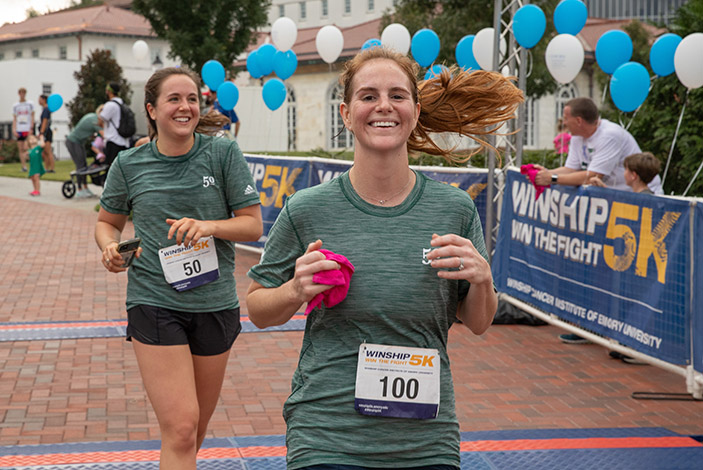 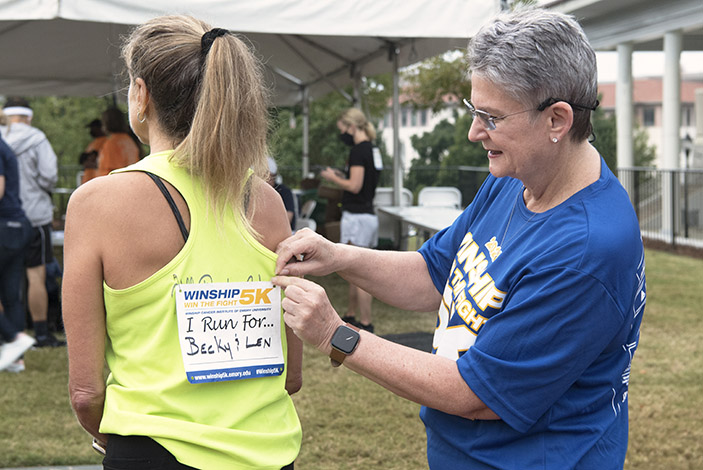 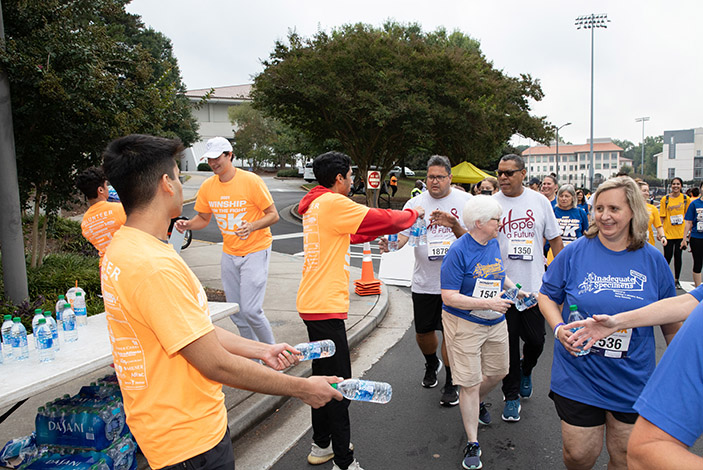 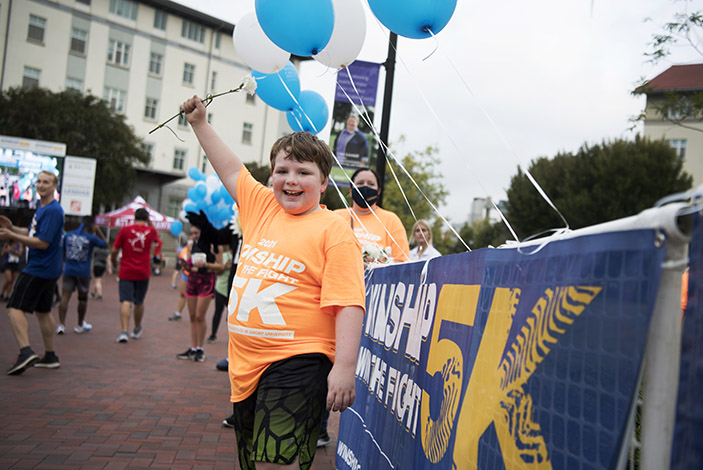 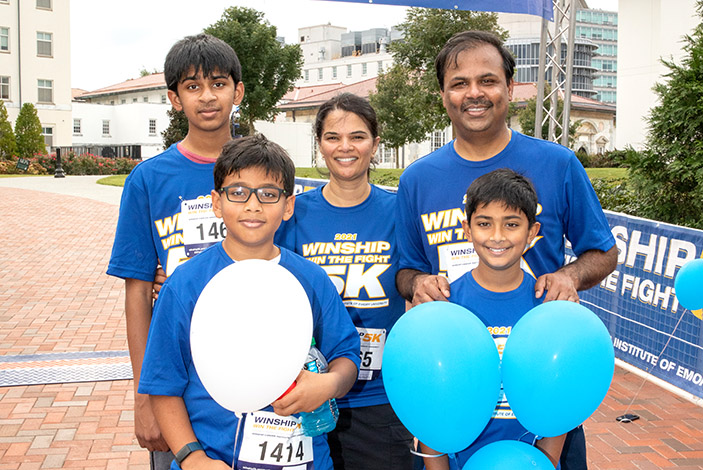 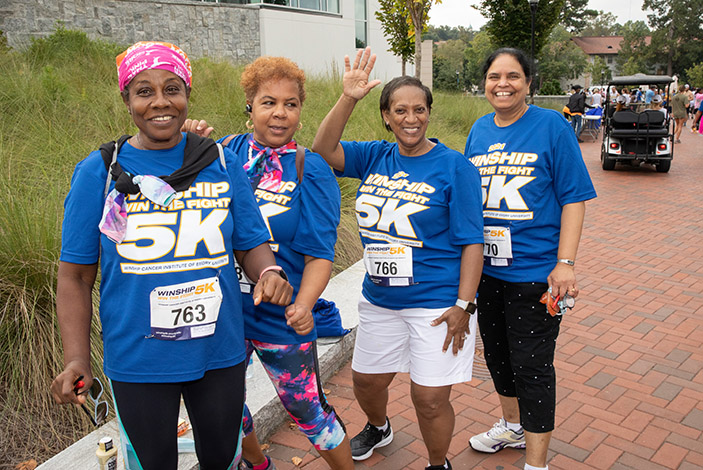 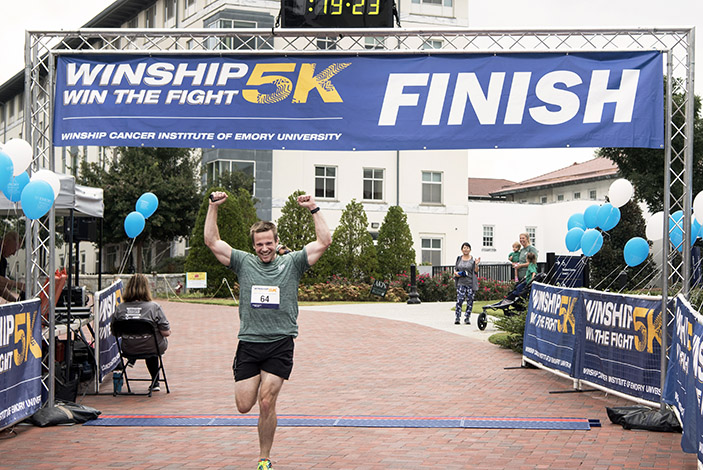 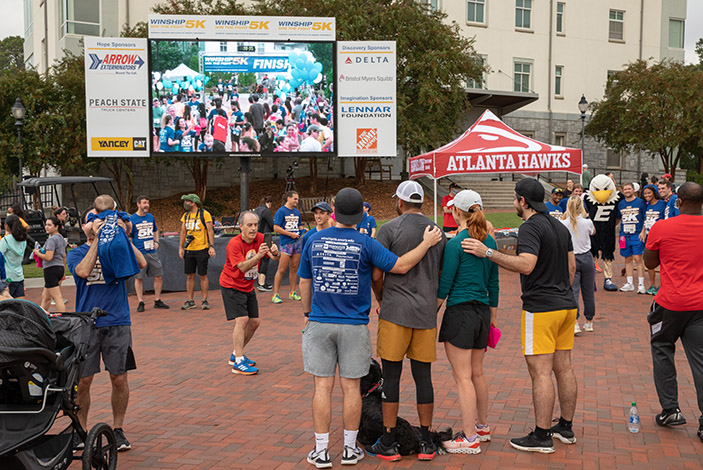 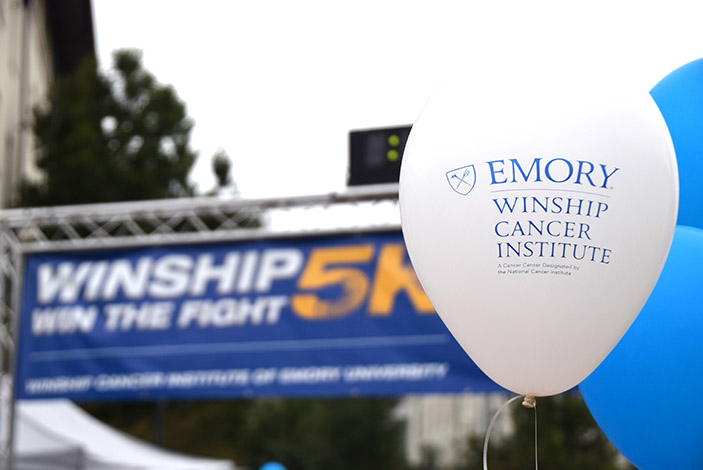 More than 1,500 in-person runners and hundreds more virtually participated in the Winship Win the Fight 5K Run/Walk's first ever hybrid event and helped raise over $800,000 for cancer research.

Long before the sun rose in Atlanta at 7:32 a.m. Saturday morning, October 2, the area around McDonough Field was buzzing with activity as volunteers in orange t-shirts made final preparations to welcome more than 1,500 in-person runners and hundreds more virtually to the 11th annual Winship Win the Fight 5K Run/Walk.

The 2021 race was Winship's first-ever hybrid event, offering both a live race and a virtual experience. The virtual event kicked off September 25 and continued until the live race October 2 to provide the most opportunity for participants to register. A website at winship5k.emory.edu provided information for donating and participating in the race. QR codes also were used to provide quick links to information.

In its first 10 years, the race raised more than $6.5 million to support cancer research at Winship Cancer Institute of Emory University. This year's goal was to raise $800,000—exceeded even before the race began at $806,480 and counting.

"It has been a pleasure and a joy to watch this evolve and expand over the years," said Gail Grimmett, the new vice-chair of Winship's advisory board. Grimmett in a video prepared in advance of the live event said she has been involved in the Winship 5K from its inception. Grimmett saw participation evolve from its initial two or three sponsors—"such a tiny event," said Grimmett—to the full range of sponsors and teams who participated in 2021 to raise funds. "I cannot tell you how important it is to have our sponsors, and team members and captains here," said Grimmett.

Like so many participating in the 5K, Grimmett's life was changed by cancer when her husband was diagnosed with multiple myeloma and eventually succumbed. "But I assure you," Grimmett said, "we had more years because of the care and access to research he received at Winship."

Expanding that research, and access to it, is precisely what the Winship 5K was created to do. But moving from a place of excellence to eminence as a recognized destination for cancer prevention, treatment, research and survivorship, takes dedicated supporters like those who participate in the Winship 5K.

"Simply put," said Irene Hammer-McLaughlin, Winship's executive director of development, "Winship is uniquely placed to development treatments and cures." Speaking to sponsors, teams, and participants, she added, "We cannot do this without you."

Suresh S. Ramalingam, MD, Winship's executive director, said in a pre-recorded greeting, "The funds that we raise from the Winship 5K go directly to support research at Winship Cancer Institute. We support exciting, promising new ideas which are intended to improve the lives of people with cancer." He noted that the funds also help Winship to recruit top-notch scientists and physicians from across the country and have also supported the research of outstanding professors in Winship 5K professorships. "Ultimately," said Ramalingam, "our goal is to discover cures for cancer and inspire hope for people."

CoMan Allgood, a cancer survivor and former Winship patient, was planning to run in his first live Winship 5K with his wife Kathie in the team they call "It's All Good." Allgood, a life coach who before his diagnosis had run marathons and half-marathons, said that when he was diagnosed with cancer in 2019, he insisted on being taken to Winship Cancer Institute. After his Emory doctor told him "I am the best in the country" to treat the rare stomach tumor Allgood had, Allgood said he knew he was in the right place. "He removed my tumor and I am cancer free," he said. "I am alive today because of him."

To fellow runners, Allgood offered this message. "You may not know the impact you are having on cancer survivors—and I was one of them," he said. “"But this 5K is helping to find a cure. Thank you to everyone who participated in raising money to find a cure for this serious disease."

Running with "Lungs 'n Roses," the team his late wife Erica formed in 2016 with a fellow lung cancer survivor, Don Aronin said their daughters and others on their team had raised more than $60,000 for this year's Winship 5K. "Erica and I were firmly convinced that Erica enjoyed a better, longer life because of the quality of care at Winship," said Aronin. "This is personal to me, very personal."

It had been a cloudy gray early morning from the time daylight first broke on Emory's campus Saturday morning. So it seemed more than coincidental when the sun broke through the clouds as runners began wrapping up the race. "Welcome back!" said the announcer at the finish line. The crowd cheered especially loudly when she proclaimed, "Survivor crossing the finish line!"