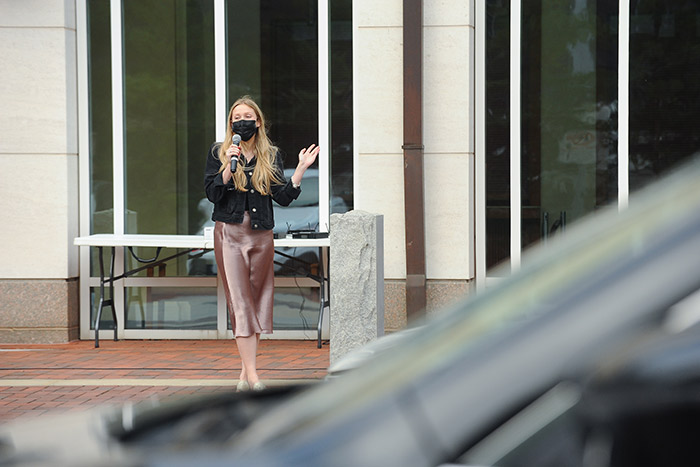 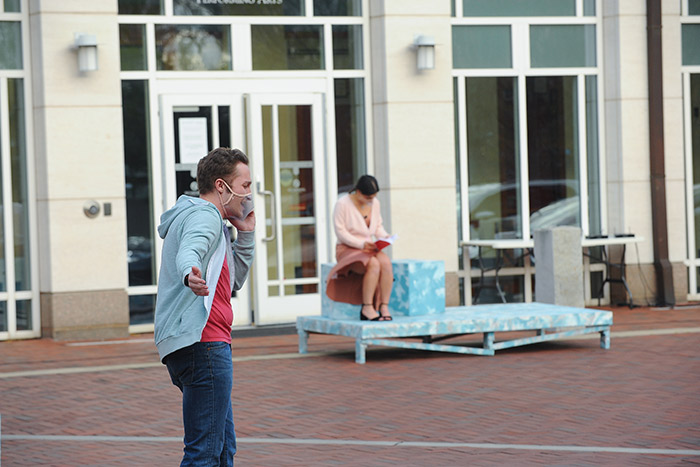 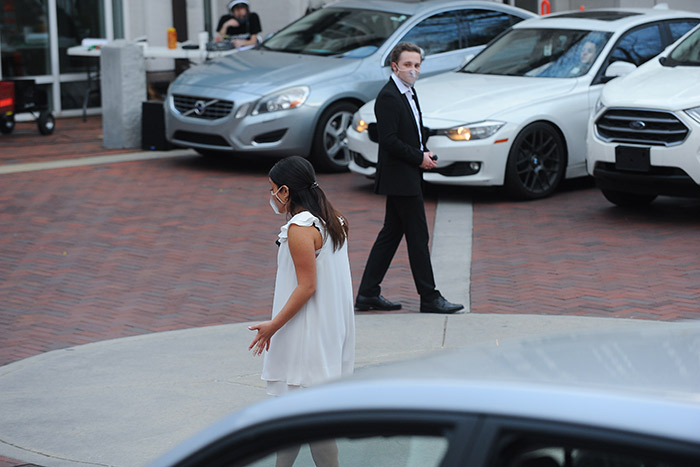 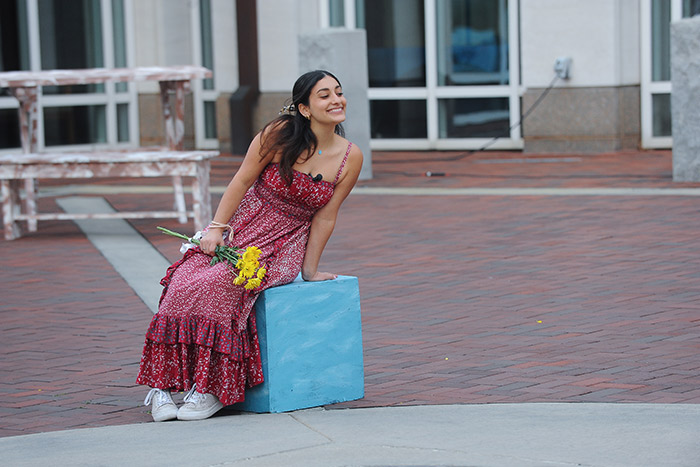 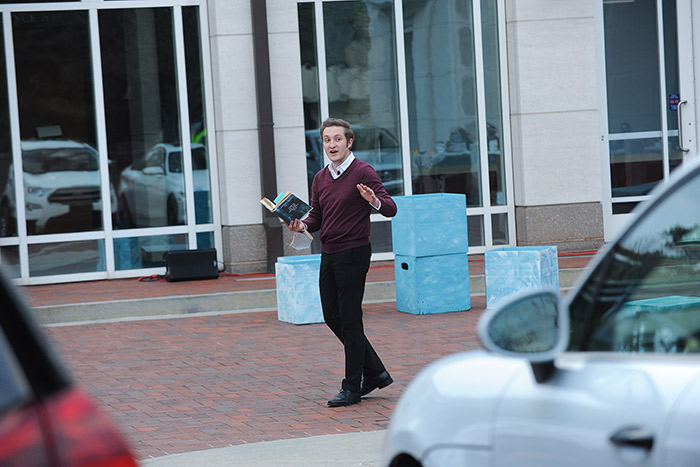 For her undergraduate honors thesis, Ruth Puryear (first image, welcoming the audience) explored how to direct intimacy onstage — while actors kept to safety protocols and audience members watched from their cars. Cast members Serena El-Khatib and Brant Adams are shown. Other cast members were Haley Ornstein and Amelia Dimas.

In the spring of 2020, theater studies major Ruth Puryear proposed an honors thesis project exploring intimacy directing onstage. (Intimacy directors are movement designers in theater and film who manage the artistry and advocate for performers during the production of sexual scenes or other intimate encounters.)

She planned to use her experience as a theater director and lifelong dancer to research rebuilding intimacy onstage in a post-pandemic world. Then the reality of the COVID-19 timeline crystalized during the summer. Her senior year — and thesis — would in no way be post-pandemic.

So the Nashville native pivoted to an arguably much more difficult research question: How does one produce intimate, live theater when proximity is an impossibility?

To answer this question, Puryear decided to direct a production of Jason Robert Brown’s 2001 musical “The Last Five Years,” which tells the story of main characters Jamie and Cathy’s relationship. Both sides of the story are presented fully; however, Jamie’s is told in chronological order while Cathy’s runs in reverse chronological order. The two timelines intersect halfway through the show, for the couple’s wedding day.

“When it became clear that my original plan was not going to be able to happen, I saw this show as the perfect opportunity to get to work on finding intimacy in non-physical ways and the process of building interpersonal relationships in the rehearsal room, which are also intimate in a way,” says Puryear.

“My overall goal for the project was to make live theater happen safely during a pandemic, and in doing so, question what defines live theater,” she adds. “What makes something ‘live’? Is it the performance itself? Is it the community surrounding it? Is it proximity?”

To Zoom, or not to Zoom?

The first challenge for Puryear was answering the fundamental question of performance venue. Would she go the route taken by the majority of professional theater companies this year and create a virtual show or could she find a safe way to produce a more traditional theater-going experience?

“I knew I did not want to do theater over Zoom, which I suggest employs techniques closer to film than theater,” says Puryear. “I knew it would be a good backup option if something were to go wrong, but my biggest reason for pushing so hard to do an in-person performance was because I wanted to explore and question the fundamentals needed to create live theater, utilizing the techniques that I have learned in my major.”

As a compromise, Puryear envisioned a drive-in style performance with audiences in their cars, tuning their radios to hear live audio streaming from the performers’ microphones through an FM receiver. Audience members would remain in their cars with their windows rolled up for the duration of the performance.

For the safety of the 13-person cast and crew, Puryear and her thesis advisor Lisa Paulsen worked with Emory’s Environmental Health and Safety Office to establish performance protocols. Actors had to wear masks and be staged at least six feet apart (twelve feet apart when singing). Mandatory mask restrictions would only be lifted when an actor was alone onstage and at least 20 feet away from any other person.

Instead of viewing necessary precautions solely as impediments, Puryear took on the restrictions with the eyes of an artist researcher, using them to deepen questions of intimacy and vulnerability.

“I wondered how I could make this show feel intimate for the actors and audience members when the actors had to be twelve feet apart and wearing masks, and when the audience was separated from them by a windshield,” says Puryear.

“I was intentional about creating artistic choices every time they would take their masks off and put them back on. Right now, every time you see other people, you put up your mask. When you’re alone, you can remove this physical and psychological barrier and become more vulnerable. I worked to incorporate this idea into the show.”

For her part, Paulsen gives much credit to the Emory administrators who made Puryear’s academic aspirations a priority, working with her to create a safe and fruitful way to conduct her research.

“I was impressed and proud to find support and advocacy across Emory for Ruth’s project,” says Paulsen. “I am so proud to be part of Emory during this pandemic year, where the student experience has been prioritized in so many ways, large and small. This project is an example of that to me. People bent over backwards to try to figure out how to make it work.”

Theatrical productions rarely go off without unexpected complications and “The Last Five Years” was no exception. One unpleasant surprise came when Puryear was exposed to COVID-19 and had to quarantine herself for two weeks. She attended rehearsals via FaceTime calls with her stage manager, a rolling audiovisual cart displaying her face for the performers.

“The entire process was one long, seemingly never-ending string of problem-solving incidents,” says Puryear. “There were many obstacles, but it was worth it in my mind to get to do live theater.”

Adds Paulson, “Watching so many of our students step up to help realize this project demonstrated to me our students’ hunger for a live theatrical experience. I think we all feel that need to work together in time and space with other people. From the beginning through the last horn, it felt like a celebration of art and our human creative impulse.”