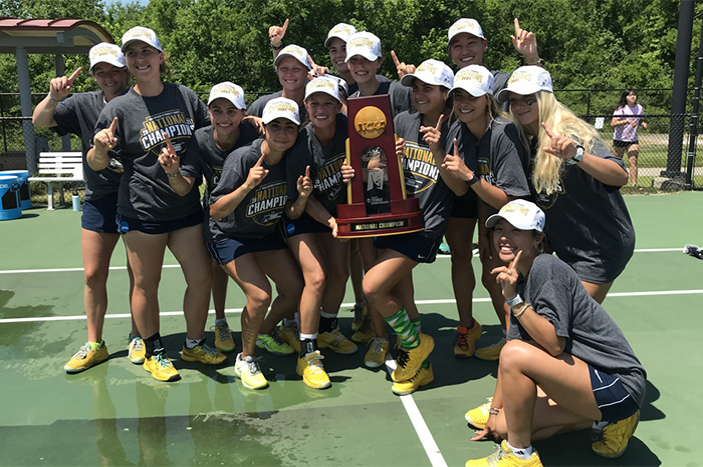 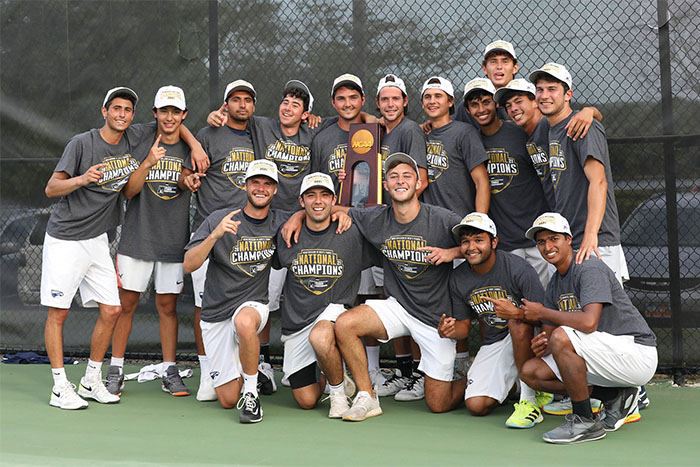 The Emory women’s and men’s tennis teams are the 2021 NCAA Division III champions, both claiming their titles on May 26 at the Champions Tennis Club in Chattanooga, Tennessee. Emory has now won a total of 29 national titles.

This is the third time in school history (2021, 2006 and 2003) that both tennis programs have won the national championship in the same season.

For the first time since 2016 and for the eighth time in program history, the Emory women's tennis team has been crowned the NCAA Division III national champions.

Senior Ysabel Gonzalez-Rico and junior Jessica Fatemi clinched the match moments apart on courts one and six with straight-set victories. Gonzalez-Rico was the first to finish and dropped only one game during her 6-1, 6-0 win over Venia Yeung. Minutes later, Fatemi closed out her title-clinching win over Caitlin Goldberg, winning 6-0, 6-2.

The singles victories followed an Emory doubles sweep that took only 50 minutes to complete. Gonzalez-Rico and teammate Katie Chang quickly posted an 8-1 win before Ana Cristina Perez and Lauren Yoon won their match 8-4. Christina Watson and Stephanie Taylor completed the trifecta by winning 8-2 at the second doubles position.

Emory closes out a year like no other with a 10-3 overall record. The championship loss was the first for the Wesleyan Cardinals, who finished the season 10-1.

The men captured the program's sixth national title with a win over fellow University Athletic Association member Case Western Reserve. The Eagles won their fifth straight match and closed out their season at 10-3 following a hard-fought 5-2 victory over the Spartans.

Emory got on the board first when the No. 1 doubles team of Hayden Cassone and Antonio Mora, playing together for the first time since May 2, crafted an 8-2 decision. The No. 2 pair of Andrew Esses and Will Wanner posted an 8-4 win, completing their season with a 6-0 record.

Esses captured the first singles match for the Eagles, followed by Wanner earning another victory for the day. Needing one more point to seal the outcome, all eyes were focused on matches played by Mora, Mark Sverdlov and Nolan Shah. Both Mora's and Sverdlov's matches went to a third set, but it was freshman Nolan Shah who accounted for the championship winning point with his 6-3, 6-4 triumph.