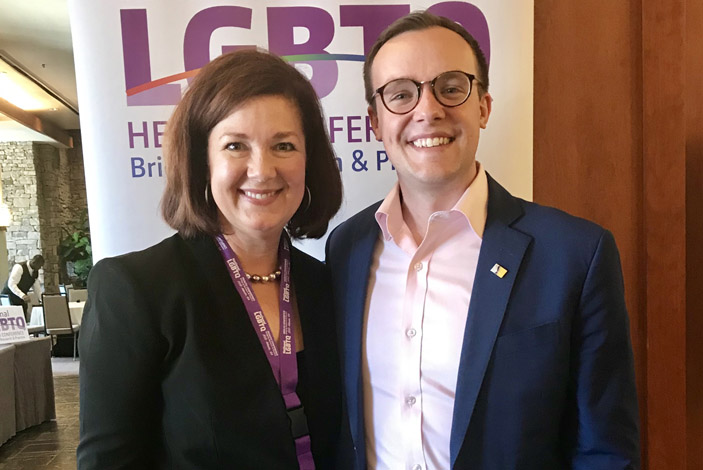 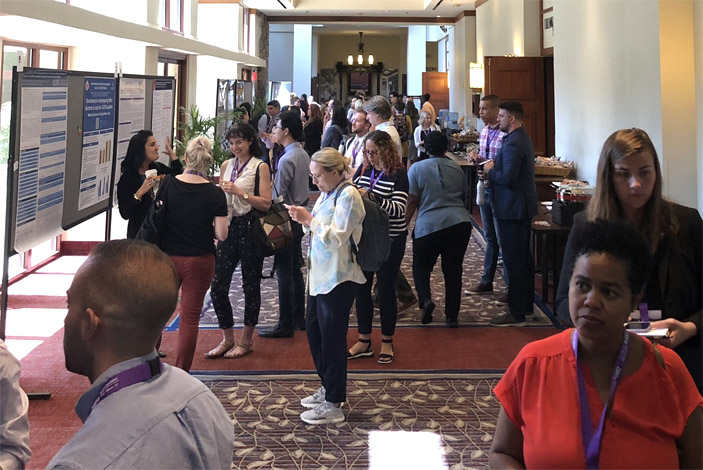 The conference featured numerous poster sessions, where researchers presented their work in the form of posters and mad themselves available or questions. 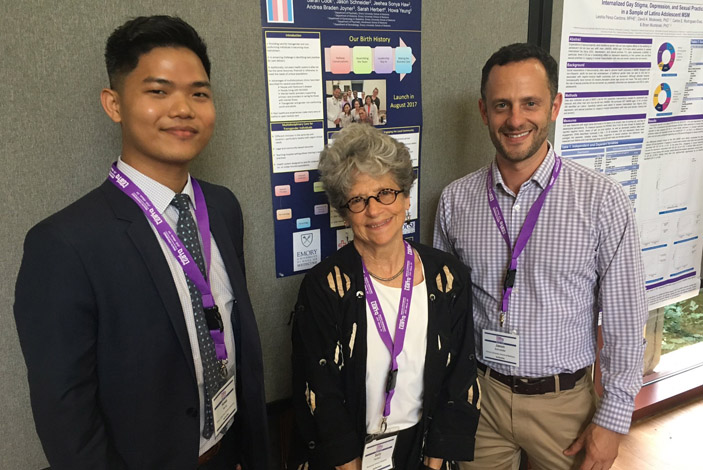 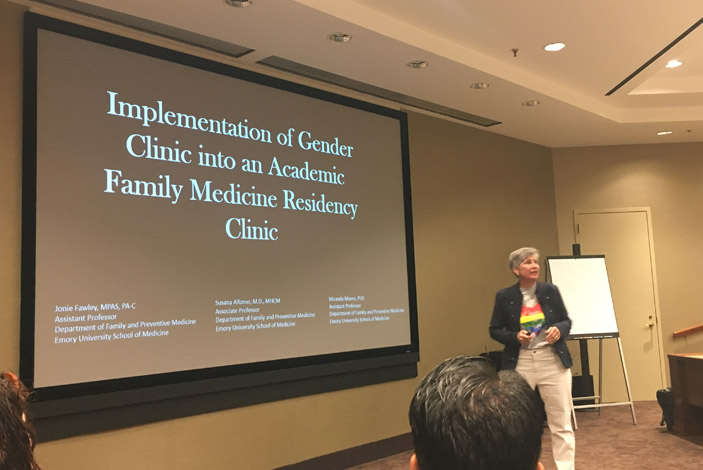 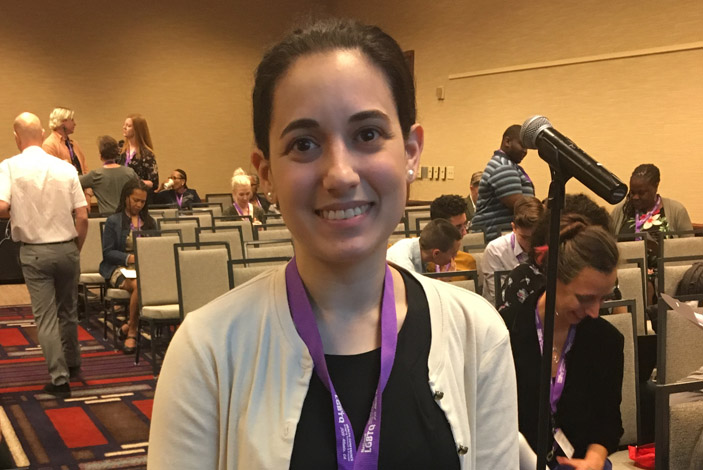 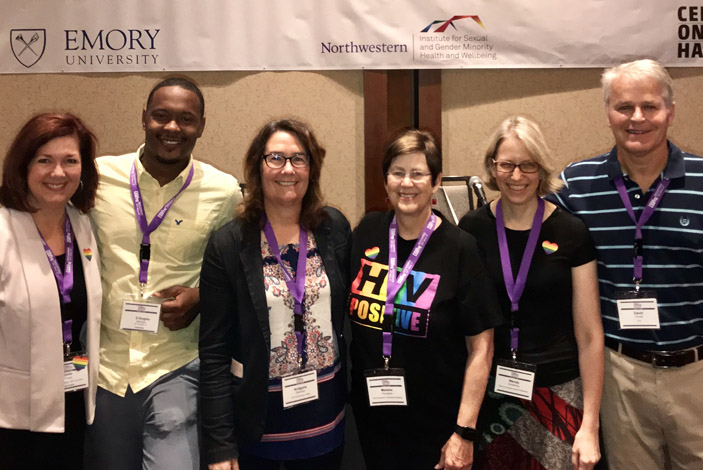 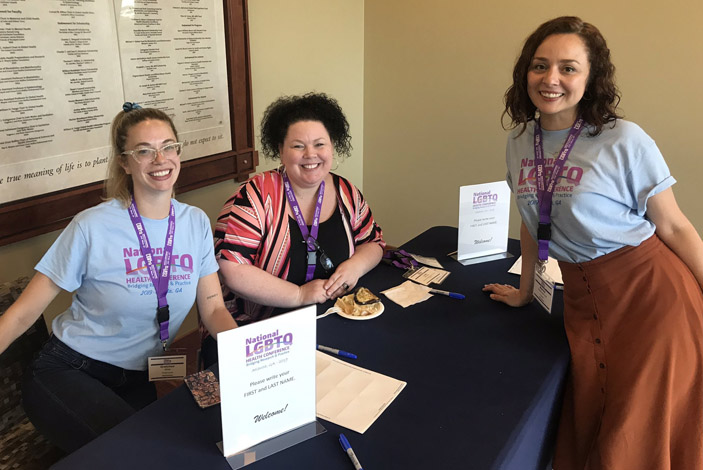 The conference was supported by a group of dedicated volunteered, many from PRISM Health (Programs, Research, & Innovation in Sexual Minority Health), based at the Rollins School of Public Health. 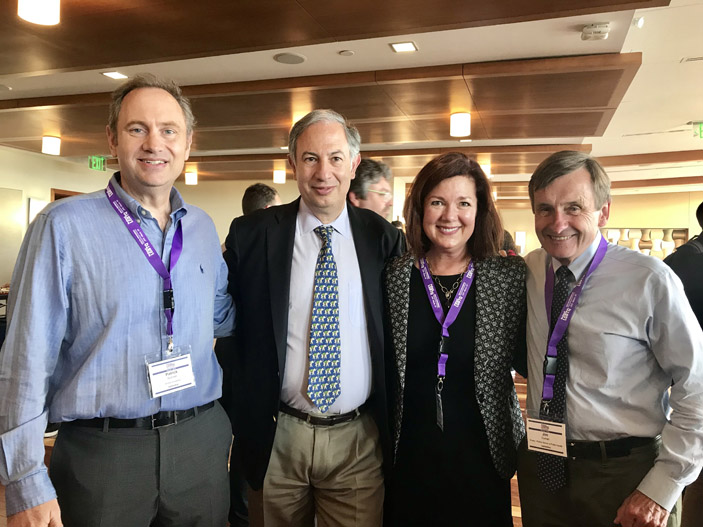 Emory University president responds to State of the Union comments on HIV/AIDS Feb. 6, 2019

Emory physician Vin Tangpricha, a global expert in transgender health, continues to listen -- and to learn -- from his patients. Oct. 19, 2018

AIDSVu: Understanding HIV Where You Live

Sexual and gender minority health issues took center stage May 31-June 1 as Emory University hosted the National LGBTQ Health Conference. Founded in 2012 by Northwestern University and the Center on Halsted, the conference aims to bring together scientists, public health professionals and health care providers to discuss issues affecting the health and well-being of the LGBTQ community.

“When we talked about putting this conference together and bringing it to Emory, one of the things that we were so determined to do was to bring passionate people together,” says Jodie Guest, PhD, MPH, conference chair. Guest is a professor of epidemiology at Rollins School of Public Health and associate program director of the Physician Assistant Program at Emory University School of Medicine.

In her opening remarks, Guest noted that she is “a very proud Emory alum and am beyond thrilled that my university has embraced the work each of you are doing to promote an inclusive world where there is equity in all our communities.”

In addition to providing an opportunity for engagement and learning, conference planners focused on supporting early career professionals. Emory hosted an National Institutes of Health Pre-Conference Workshop to help with that effort. Students, post-docs and new investigators who plan to submit an NIH grant application within the next two years could learn more about the NIH structure and grant processes, explore mentorship opportunities and network with established researchers.

“We wanted to highlight the new generation coming up behind us and lift you up, and we think we did that,” Guest told attendees in the conference wrap-up. Young people, many of them pursuing graduate degrees, presented the majority of the research projects in sessions and posters.

“I see a lot of young faces in this room,” Dwight McBride, Emory provost and executive vice president of academic affairs, said during his welcoming remarks. “I’m inspired as an educator that one of the hallmarks of this conference training and networking of the next generation of folks who will be engaged in this work.”

The conference, the largest of its kind in the world, began with welcomes from Emory and Atlanta officials.

In addition to Guest and McBride, attendees heard from Rashad Taylor, chief policy adviser to Atlanta Mayor Keisha Lance-Bottoms. Taylor highlighted the fact that Atlanta is an epicenter of the HIV/AIDS epidemic.

“Why is it that the ‘City Too Busy to Hate’ is seemingly also too busy to protect and preserve the health and well-being of all of our residents?” he asked.

On a more hopeful note, he shared that the mayor recently introduced legislation to expand the scope and reach of PrEP (pre-exposure prophylaxis) to high-risk Atlantans; the Atlanta City Council unanimously passed the measure. Taylor also introduced the crowd to Malik Brown, Atlanta’s first full-time LGBTQ affairs coordinator, who was in attendance.

"The summer of graduation, I had to choose between coming out and not being true to myself,” he said. Buttigieg also addressed current challenges to LGBTQ equality, including the high percentage of homeless teenagers who are sexual minorities and recent policy shifts in the eligibility of transgender people to serve in the U.S. military.

"We march because even though the tides of progress are strong, the walls of injustice are still standing,” he said. “And we march because the tide, like love, will always win."

“LGBTQ health research is health disparities research,” explained Poteat, assistant professor of social medicine at University of North Carolina-Chapel Hill. “Health disparities are preventable differences in disease outcomes, injury, violence or opportunities for optimal health that are experienced by people who are oppressed.”

The field of LGBTQ health is so large and interconnected that researchers need to consider multiple factors: reproductive justice, the prison-industrial complex, HIV and AIDS, transgender health, Black Lives Matter, immigration issues and more, she said. Quoting activist-author Audre Lorde, Poteat reminded attendees that there’s no such thing as a “single-issue struggle” because people do not lead “single-issue lives.”

The 2019 conference was larger in size, scope, and in breadth of attendees than in previous years. Presentation highlights included an overview by Canadian health officials of federal initiatives and policy advances in Canada to improve measurement, monitoring and action on inequalities faced by diverse sexual and gender minority populations.

Two separate research presentations highlighted the success of “gender clinics” founded and staffed by Emory doctors and other professionals. “56 percent of LGB people and 70 percent of transgender and gender non-conforming people report experiencing discrimination by health care providers,” Guest noted in her opening remarks for the conference. “According to the 2015 U.S. Transgender Survey, 23 percent of transgender respondents did not see a doctor when needed because of fear of being mistreated.”

Launched in August 2017, the Gender Center at Grady Healthcare has handled over 250 patient encounters. Patients have been predominantly under 40 (73 percent), African-American (55 percent) and uninsured (78 percent). The clinic provides health services not only specific to transgender health, such as the delivery of hormones, but areas like gynecology, psychiatric and physical therapy, and internal medicine.

Jonie Fawley, assistant professor at Emory University School of Medicine, shared the story of a gender clinic established in 2015 at the Emory Family Medicine Clinic in Dunwoody, Georgia. Designed to improve access to gender-affirming hormone therapy for the transgender population, the clinic was a learning ground for family medicine faculty and residents, who previously lacked this exposure. The clinic disbanded when the primary clinic doctor left the practice.

A panel discussion by HIV/AIDS experts on “America's Plan for Ending the HIV Epidemic” concluded the conference. As medical director of the Ponce de Leon Center HIV/AIDS clinic at Grady Health System, Emory professor Wendy Armstrong, MD, FIDSA, FACP, is intimately familiar with the disease’s impact on Metro Atlanta and Georgia. The state ranks first in the U.S. for new HIV diagnoses and Atlanta ranks fourth among U.S. cities for new diagnoses. From 2006 to 2017, the Ponce Center saw a 33 percent increase in total number of patients.

Emory University was the conference’s hosting partner with founding partners the Institute for Sexual and Gender Minority Health and Wellbeing at Northwestern University and the Center on Halsted. Local community advisory board partners included the Satcher Health Leadership Institute at Morehouse School of Medicine, H.Y.P.E. to Empower, the Phillip Rush Center and Georgia Equality.