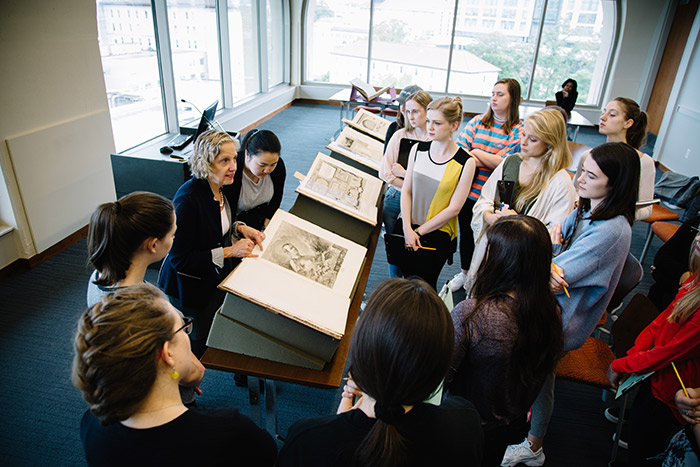 Students in Sarah McPhee’s Italian Baroque Architecture class admire one of the Piranesi etchings in “Le Antichità Romane,” a rare four-volume set acquired by the Rose Library with the help of the Carlos Museum and the Art History department. Emory Photo/Video 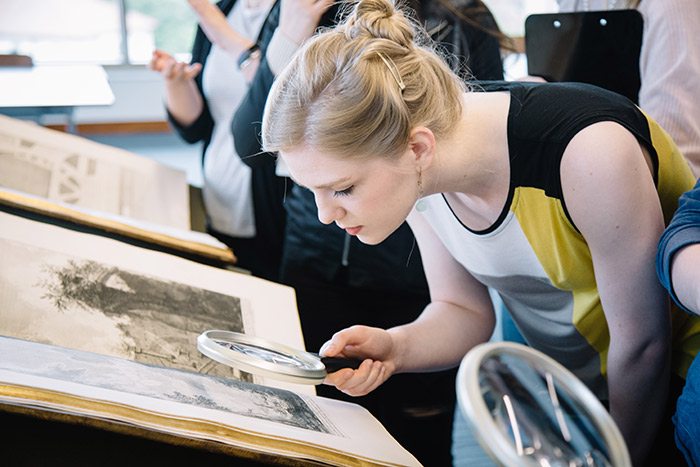 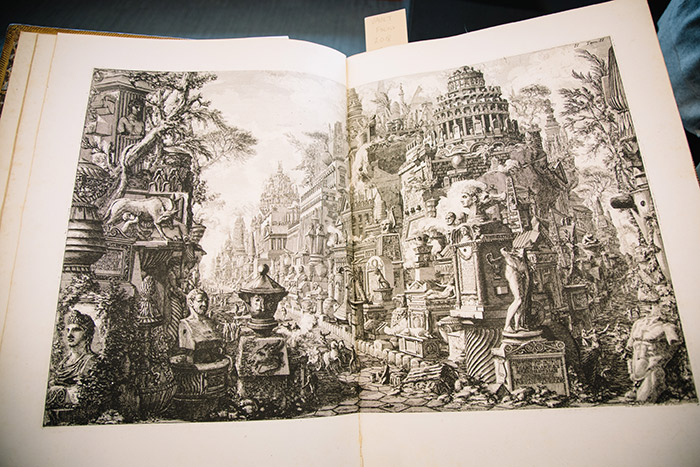 Most of Piranesi’s etchings were of maps and depictions of ancient Rome as he imagined and recreated them, and some appear to pop out of the book. Emory Photo/Video 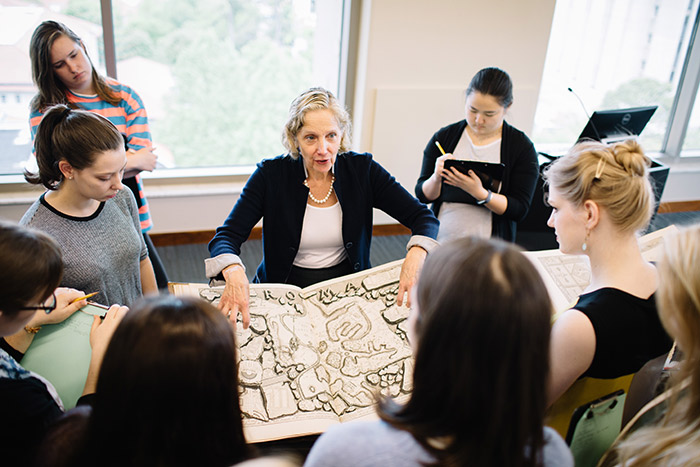 Piranesi etchings at the Carlos Museum

Books by Piranesi at Emory Libraries

As McPhee and graduate student Abbey Hafer gently turned the pages and described the details of the etchings, telling the stories of Piranesi’s work on them, the students pressed closer, transfixed as the inked masterpieces were brought to life.

“It's so different to see these volumes in person because it allows us to more deeply interact with the material rather than just seeing images projected on a screen,” says Hannah Middlebrook, a junior who is double-majoring in business and art history. “Hearing about the detail and nuance that Piranesi put into making these volumes is really engaging and inspires me to continue studying his works.”

Emory’s Woodruff Library collaborated with the Michael C. Carlos Museum and the Department of Art History to obtain the rare set, which arrived at the Rose Library on Feb. 23. The four volumes, created around 1756, have stunning frontispieces and multiple fold-out pages that reveal large maps or other etchings.

“The acquisition of these volumes will transform our ability to teach Piranesi at Emory,” says McPhee, Samuel Candler Dobbs Professor of Art History and the department chair. “If you have the real thing, you hold it in your hands, you turn the pages, you see the texture of the paper, you understand in a way that you can’t by seeing the volumes online or looking at a digital print. The degree of enthusiasm on the part of our undergraduates and graduate students is evidence that original works of art make all the difference.”

Collins confirms that “many people from across the Libraries, the Carlos Museum and the art history department worked to research these volumes and make the case to bring this magnificent acquisition to Emory.”

In addition, Hafer, a graduate student in art history specializing in Roman Baroque architecture, will conduct research on the rare volumes as part of her Mellon Graduate Fellowship in Object-Centered Curatorial Research.

Hafer says her research will culminate in a digital catalog of works by Piranesi at Emory (which will include print volumes in the Rose Library and single prints in the Carlos Museum) and the possibility of a Carlos Museum exhibition of Emory’s Piranesi materials.

“We were already in the process of trying to acquire these volumes, but Abbey’s interest in working on them was serendipitous,” McPhee says. “Abbey has the eye and research skills to make a substantial contribution to our understanding of ‘Piranesi at Emory’ and the process will certainly train her in the field she’s interested in learning about.”

Teaching and the collection

Emory Libraries has been building its Views of Rome collection for more than 20 years, and the four volumes of “Le Antichità Romane” are an essential addition, McPhee says. Among the Rose Library’s Piranesi holdings are mixed volumes containing Piranesi prints and the “Campus Martius Antiquae Urbis” (1762), a first edition of his reconstruction of an important urban environment outside the walls of Rome.

The Carlos Museum’s holdings of Piranesi materials include a wealth of single-sheet prints showing different views of the Colosseum, the Pyramid of Caius Cestius, and many other sites. The museum’s 2013 exhibition, “Antichità, Teatro, Magnificenza: Renaissance & Baroque Images of Rome,” co-curated by McPhee, focused on 16th through 18th century Rome and included numerous works by Piranesi among more than 130 works on display.

The “Campus Martius” and other Piranesi prints have played major roles in courses taught at Emory. Students regularly use the “Campus Martius” at the Rose Library in art history classes, including “Piranesi and Antiquity,” “Views of Rome,” “Italian Baroque Architecture” and “Rome in Print.”

McPhee says she and Varner, who is on leave, plan to team-teach a new course on Piranesi sometime after he returns in fall 2019. Varner also wants to bring back his “Piranesi and Antiquity” course with a focus on the four newly acquired volumes.

“With Kim (Collins)’s help over the years, we’ve really been building Rome,” McPhee said. “There’s a great deal of interest and expertise in the subject in the art history department.”

And much interest from the students, too, who appreciate having up-close access to the complete “Le Antichità Romane” set.

“I feel extremely fortunate to have access to these kinds of rare books at Emory, knowing that I can explore these volumes and many others whenever I want,” Middlebrook says. “Often with rare books, it's difficult to obtain all the volumes, especially in such good condition. Seeing all the books laid out and flipping through page after page of detailed engravings by such an important architectural figure was really fascinating.”

“This acquisition is a wonderful example of a partnership across Emory Libraries, the Carlos Museum and Art History department to preserve and promote our cultural heritage, and to integrate unique resources such as these rare Piranesi volumes into teaching and learning at Emory,” says Jennifer Meehan, interim director of the Rose Library.

“It’s inspiring to see the immediate impact of bringing such cultural heritage alive for students in the classroom and research experience, and to know of the future teaching and study this makes possible,” she says.