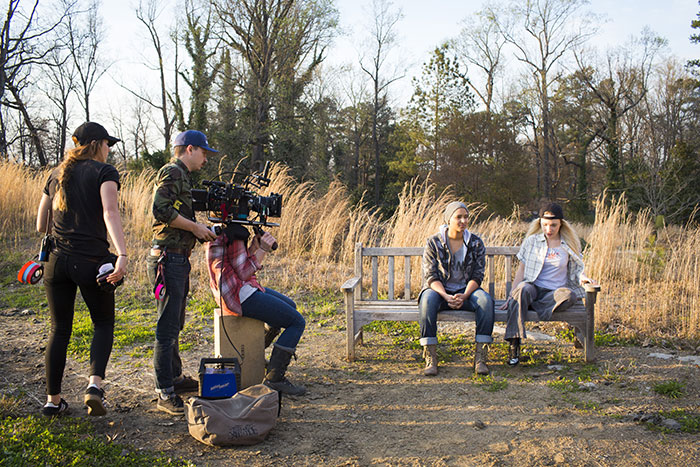 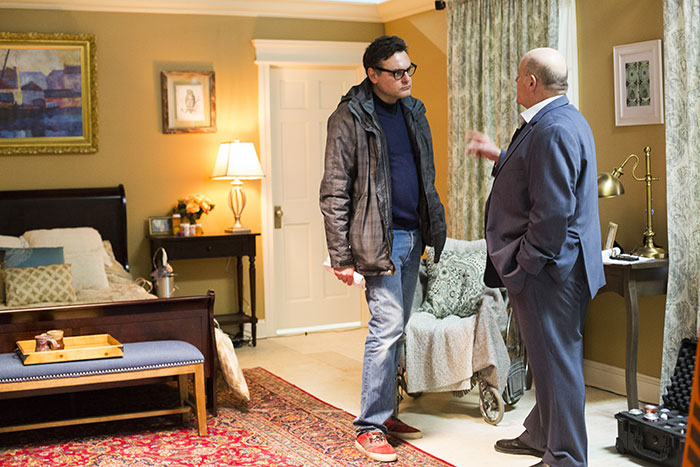 Emory professor Rob Barracano, director and co-writer of “Fran K.,” talks on set with actor Michael Ironside. The bedroom set was one of several created in Building A on Emory’s Briarcliff property. 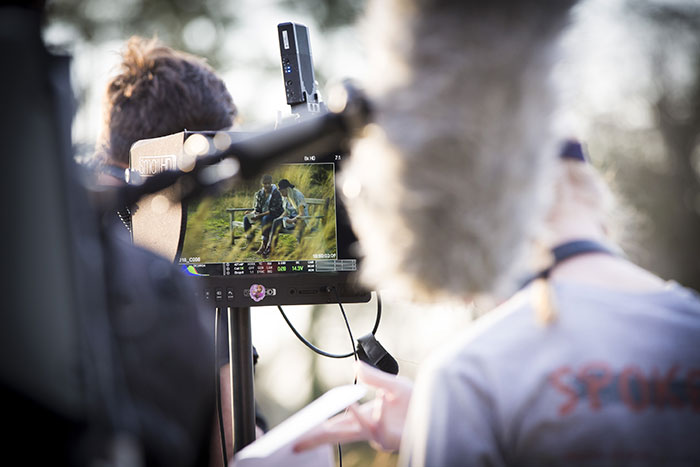 The project was a collaboration between Theater Emory, Emory College’s Department of Film and Media Studies and the Theater Studies Program, with student input throughout the process.

Department of Film and Media Studies

Emory’s Briarcliff property is one of Atlanta’s most sought-after locations for film and television production in the city’s newest booming industry, so the hustle and bustle of yet another film shoot in late March was not unusual. But this was not your typical Hollywood production.

During the university’s spring break, a crew of Emory students, alumni, faculty and staff, alongside local film and television professionals, descended on Briarcliff’s ominous-looking Building A to film the sci-fi morality tale “Fran K.”

Working under the production moniker of Screen Stages, the shoot was an unprecedented collaboration between Theater Emory, Emory College’s Department of Film and Media Studies and the Theater Studies Program. The production was also a once-in-a-lifetime opportunity for students to work on a film that was both a learning environment and a fully professional set where expectations were high and the hours long.

“The purpose of this exciting collaboration was for students, faculty and professionals to engage on an original film project at a high level,” says Brent Glenn, artistic director for Theater Emory. “This type of interdisciplinary work is invaluable in terms of its ability to reach and impact both members of the Emory community and the greater Atlanta community.”

Directed by Rob Barracano, professor and director of production in Emory’s Department of Film and Media Studies, “Fran K.” is a short film co-written by Barracano and Frank Rinaldi. It stars Atlanta actors Anissa Matlock and Cuyle Carvin, as well as Michael Ironside, known for his work as a villain in many films including “Total Recall” and “Top Gun.”

Inspired by Mary Shelley’s “Frankenstein,” and created in part for Emory’s university-wide celebration of the 200th anniversary of Shelley’s seminal work, “Fran K.” is a contemporary reimagining that wrestles with questions of ethics in science and what does and does not make a person a monster.

The idea to take on such an immense project initially grew out of a class collaboration, says Lisa Paulsen, chair of Theater Studies.

“We now offer Narrative Filmmaking and Acting for Camera courses at the same time, which allows students to work together for their final course projects as well as in weekly shared labs,” she says. “It underscores Emory’s distinction as a university that is innovative in cross-disciplinary collaboration.”

On one of the final nights of shooting, the set had all the markings of one of Atlanta’s many film shoots.

The first floor of Building A served as basecamp for production, complete with junk-food laden craft service tables and work spaces covered with computers and call sheets — everything necessary for wrangling a crew of more than 50 people. (Building A has been featured on screen before, most notably as the site for the Hawkins National Laboratory in the Netflix hit “Stranger Things”).

Further within the building, Emory students with headsets moved between basecamp and various rooms converted into strikingly realistic sets: a jail, a laboratory, a bedroom.

“Rob was very clear about it being a learning set,” says Emily Diaz 19C, a film and media studies major from Lilburn, Georgia. “He would encourage us to ask questions throughout the process. I really appreciated being able to ask the director of photography, Sidarth Kantamneni, questions about the camera and such. That’s something you aren’t allowed to do on most sets.”

The 20 students serving as interns merged seamlessly with the professional crew, including five Emory alums.

“I was very nervous about how our interns would perform on a professional set, which is highly disciplined with long hours and a strict hierarchy,” says Barracano. “Even in the first hours of the shoot, with walkie-talkies on, in view and out of the path of chaos, our Emory interns were terrific! Some of them were even spontaneously offered more film work by crew members at the end of the shoot.”

Student interns witnessed the massive organizational effort behind film production, moving from location to location to get all the necessary shots. In addition to the Briarcliff property, Emory’s Visual Arts Building (where students helped build a set mimicking a residential hallway) and a local convenience store served as filming locations.

“Working on ‘Fran K.’ was the first time I was ever on set behind the camera,” says Alisa Yan 21C, a film and media studies major from Rockville, Maryland. “It was a great look into what set life is like professionally and really cemented in my mind that I want to work on set as a career outside of class and after college.”

Students were even brought in on the creative process by Barracano and production designer Sara Culpepper, a lecturer in Emory’s Theater Studies department and resident scenic artist with Theater Emory. Alivia Burdette 19C, a theater major from Hampstead, Maryland, served as an art department production assistant on set.

“I was able to be involved with the dressing of sets and flying props in when they were needed during filming,” says Burdette. “The best part of the experience was being able to have hands-on experience with a real set and then see everyone’s collaboration come alive on a monitor.”

Students were also involved in helping shape the script.

“I’m particularly interested in writing and directing, and luckily Rob was very open,” says Diaz. “He allowed us to give him constructive commentary on the script and would really take our comments into consideration. Also, Michael Ironside is a writer himself and gave me a lot of valuable writing advice that really inspired me to keep working hard.”

Professional film sets are famous for their grueling schedules and rigorous work environments, a fact that worries Barracano when imagining a future for the young filmmakers he instructs at Emory.

“This new generation of filmmakers working made me concerned about our industry’s culture of long hours,” says Barracano. “What I have been proud of doing in the past, I actually worried about for the students.”

The Emory students working on set took the long hours in stride, reveling in the experience. “One of my greatest joys on the shoot was seeing how intensely focused and happy our students were,” says Barracano. “There were a lot of smiles.”

“My favorite moment when working on set was the last day,” adds Yan. “We had worked from 8 p.m. to 8 a.m. and had just finished wrapping, breaking down and packing everything into the truck when the sun started rising — it was so bittersweet, saying good-bye to everyone and leaving the crew for the last time while the sun rose behind us and the birds started singing.”

Screen Stages, a collaboration between Theater Emory and Emory’s Film and Media Studies, presents the premiere of “Fran K.,” Sunday, April 29, at 2 p.m. in White Hall 208 on the Emory University campus. The screening is free and open to the public and will be followed by a panel discussion, Q&A and reception.