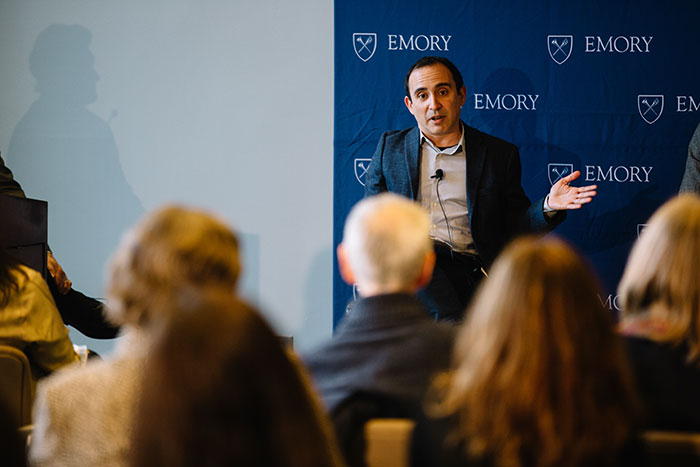 Pablo Palomino, an assistant professor of Latin American and Caribbean Studies at Oxford College, discusses his research during a panel with other Mellon Faculty Fellows. 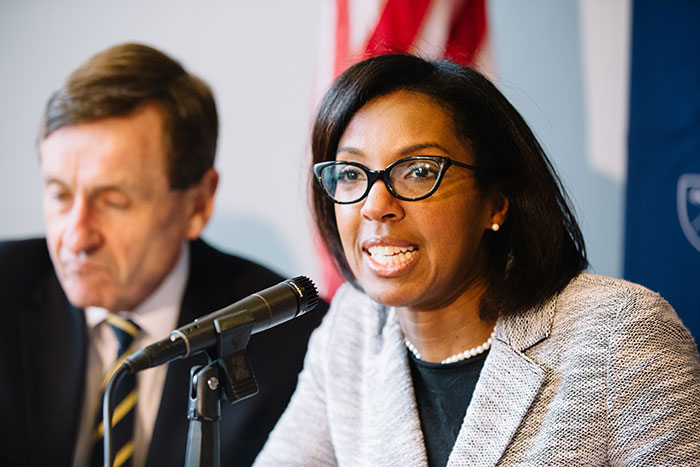 Erika James, dean of Goizueta Business School, speaks during a panel discussion on “Emory as a Research University with the Liberal Arts at Its Core.” 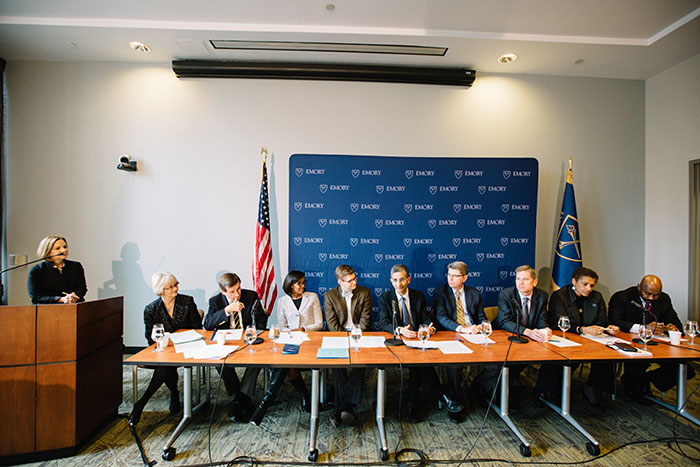 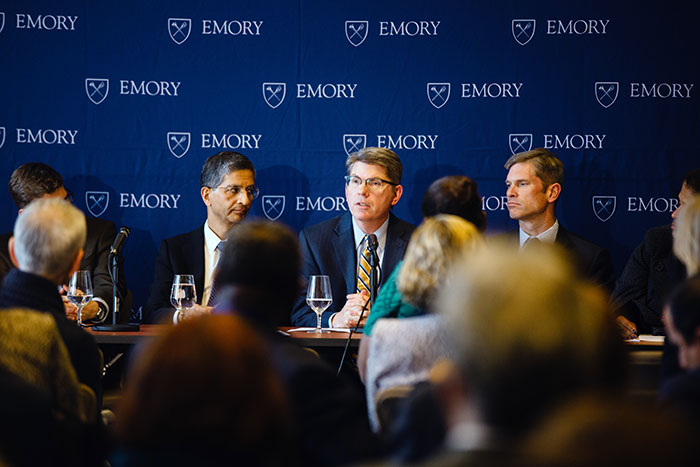 Douglas A. Hicks, dean of Oxford College (center), addresses the group as Vikas P. Sukhatme, dean of the Emory School of Medicine (left), and Michael Elliott, dean of Emory College, look on. 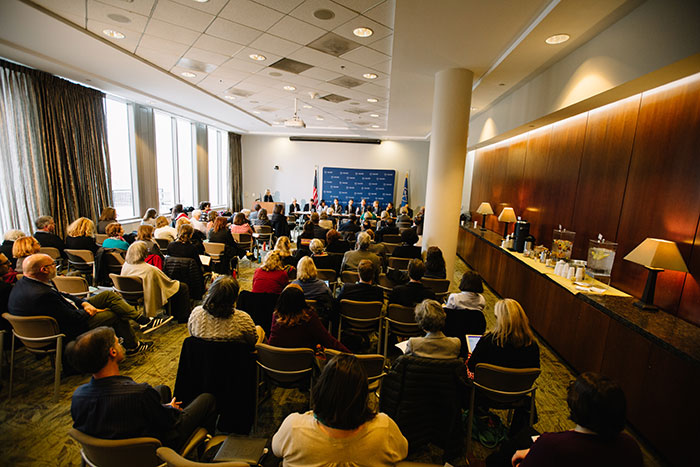 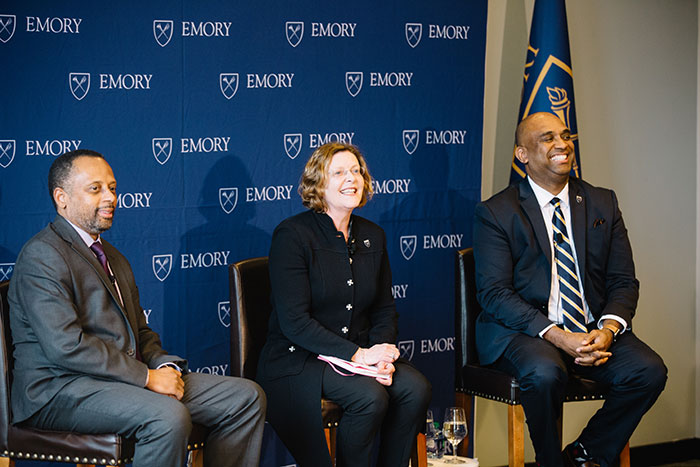 Office of the Provost

The vitality and creative breadth of humanistic inquiry was showcased at Emory’s Interdisciplinary Humanities Conference, as faculty, students and university leaders gathered to discuss the growth of interdisciplinary scholarship at Emory and ways to help it flourish.

Organized through the Office of the President and the Office of the Provost, the March 26 conference also celebrated the final year of Emory’s Humanistic Inquiry Program (HIP), made possible by a $2.4 million grant from the Andrew W. Mellon Foundation to strengthen the humanities across the university.

Over the past five years, the HIP has supported recruitment of junior faculty across the humanities, contributing to the development of interdisciplinary humanities and funding Emory’s Mellon Faculty Fellows, whose scholarship was a focus of the event.

Opening the conference, Emory President Claire E. Sterk invited participants to “engage in an intellectual exercise that, I believe, is just pure pleasure,” with a goal of sharing knowledge about new intellectual approaches and exploring how principles of the humanities can be applied across all fields.

Today, the role of the humanities is more important than ever, within the academy and across the world, Sterk emphasized.

In understanding the world around us, there will always be a need to evaluate evidence, integrate knowledge across boundaries and raise challenging, ethical questions. And interdisciplinary humanistic inquiry helps achieve all of that and more, Sterk explained.

The morning session was devoted to two panels highlighting the scholarship of Emory’s Mellon Faculty Fellows — assistant and associate professors who have pursued scholarship that spans multiple disciplines.

In most cases, their scholarship was guided by curiosity arising from personal experiences, whether wondering about the geographic and cultural history of a song or discovering the interconnectedness of an encyclopedia.

Daniel LaChance, an assistant history professor and Mellon Faculty Fellow in Law and Humanities, believes his scholarship arose from witnessing the anger and violence that erupted when his father, a criminal defense attorney, represented a man charged with murdering a 13-year-old boy.

Memories of media coverage — an angry crowd, the father of the victim lunging at the defendant, his own father being shaken by the lapels for “defending this monster” — prompted LaChance to consider the relationship between law and violence, and eventually how legal rituals serve as a surrogate for violence.

With degrees in English and American studies, and previous teaching and research appointments in legal studies and public affairs, LaChance acknowledged, “I often joke with my students in history class at Emory that their professor doesn’t have one degree in history.”

In fact, he values the opportunity to pursue research across multiple domains and is grateful to be at Emory, where interdisciplinary scholarship “has a life in the academy.”

Kylie Smith, an assistant professor and Mellon Faculty Fellow in Nursing and Humanities in the Nell Hodgson Woodruff School of Nursing, is a historian, not a nurse. Her scholarship addresses the history of psychiatric nursing, straddling issues of social justice, history, American law, civil rights, race theory and health sciences.  “History, to me, is about finding connections,” she said.

Cross-disciplinary connections are also critical for Daniel Reynolds, assistant professor and Mellon Faculty Fellow in Film and Media Studies, whose latest book examines the relationship between media and the mind.

Since the nature of interdisciplinary work is inherently collaborative, Reynolds suggested creating more opportunities for connection. “What can we do together, whether or not we are collaborating on a project? What can come out of knowing each other? What kind of new perspectives can we establish?” he said.

“Emory has a lot of great structures already in place for helping people across campus meet one another and work together,” he said. “In my case, the Emory Center for Mind, Brain and Culture has been really instrumental to my growth as a scholar.”

An early afternoon session united Emory deans and senior leadership for a discussion of “Emory as a Research University with the Liberal Arts at Its Core.”

Representatives from Emory’s colleges and professional schools addressed the reach of the humanities within research, scholarship and teaching, and addressed ways the academy can support it.

Here are some highlights:

The value of humanities

The conference concluded with a discussion about the future of the humanities among three generations of Emory provosts:

As moderator, Sterk asked Lewis, whose PhD is in history, and McBride, who holds a PhD in English and is a professor of English and African American studies, how they found their way to a career in the humanities. Both first-generation college students, they each described circuitous journeys to becoming humanistic scholars — a pathway shaped by their expanding interests.

When asked about those who may doubt the value of the humanities, Lewis described traveling to India to meet with a group of prospective students and Emory alumni. When a business school alumnus was asked what his most important class had been, he answered, “art history.”

Most of his customers were European, and the ability to converse with them required a base of common knowledge, which his art history class provided. “It’s that sense then, of what it means to be broadly educated,” Lewis said.

“What we’re trying to do as educators is educate for a lifetime,” he added. “What one goes on to pursue for a graduate degree or beyond actually may not be defined by what the major is in the first four years.”

McBride said that he was drawn to Emory in part because of the community’s readiness to be “more than the sum of its parts.”  “There is some real untapped potential here… if the leadership can break down some of the institutional barriers that get in the way of allowing the faculty, in particular, to really lead us in slightly different directions,” he said.

“The work we have to do is so critical to a true democracy,” he said.