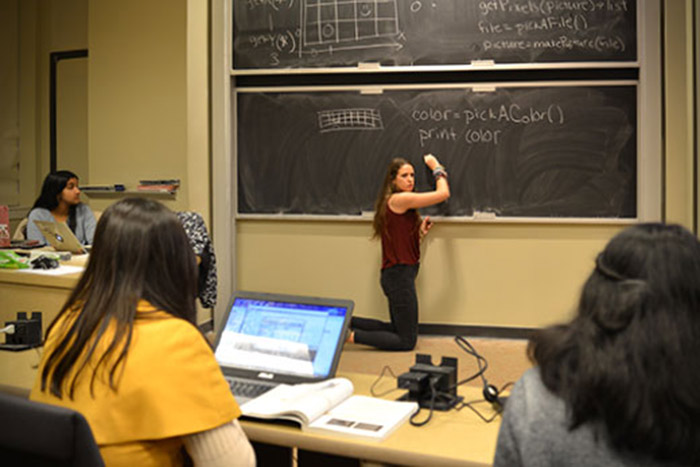 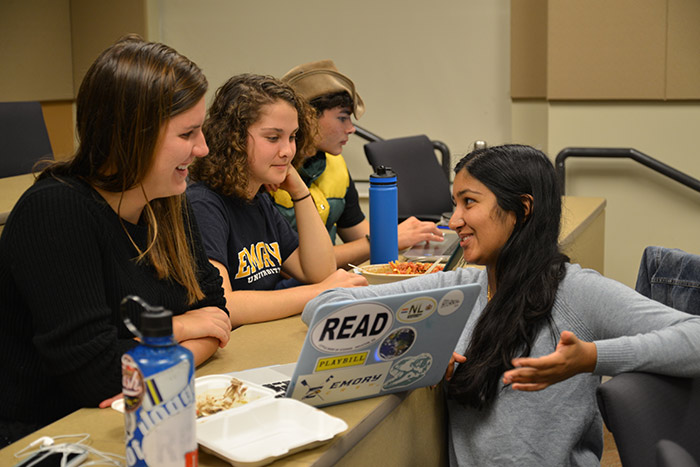 Maya Nair (right) works with students in the non-credit programming course for students who are not majoring in computer science. Photos by Tenzin Palbar.

Mind over matter: Her interest in the brain led her to computer science Dec. 19, 2016

Department of Math and Computer Science

Tammany Grant and Maya Nair, two Emory seniors, will again teach their Media Coding Camp this spring to those not majoring in computer science.

The semester-long course does not require a background in programming and will teach Python using multimedia applications.

Classes are held from 7 p.m. to 9 p.m. every Tuesday between Jan. 23 and April 24. Students must agree to attend all classes to be accepted.

Tammany Grant arrived at Emory thinking she would study languages and politics. For Maya Nair, the future was something in health care, most likely as a doctor, despite a lifelong love of music.

Then the two women met in a lab for Intro to Computer Science (CS 170) that pivoted their view. They connected over questions and the gradual “aha” moments about the computer algorithms they were learning.

Now seniors, both are studying computer science, and they are cofounders of Girls Who Code Emory, a nonprofit that relies on college volunteers to expose high school and middle school students to the field.

Grant and Nair also spent the fall co-teaching Coding Camp, a pilot programming course for non-CS majors, and have become the student faces of a growing program that is working to draw more women and students of color to the field. The course was so popular that they will teach it again in the spring.

“When you’re surrounded by people like you, it’s just easier, especially in the beginning,” says Grant, a double major in computer science and French.

Adds Nair, who is pairing her finance degree at Goizueta Business School with an unofficial computer science minor, “I think about high school, and no one ever said to consider computer science. It was expected for the guys, so just having other women in the first class kept me going.”

It also fuels their work with Girls Who Code, the campus chapter of a national nonprofit that teaches tech skills to middle school and high school girls. Now in its second year, the Emory chapter focuses on the basics of computer science and programming by working on projects in the real world, such as a website that pinpoints Atlanta-area homeless shelters.

Such real-world implications have helped grow Emory College’s computer science for years. The number of students majoring in just computer science has grown 170 percent in the past 15 years, to 116 students this year.

When counting those students who have a joint major, the number grows to about 200 students, says Vaidy Sunderam, Samuel Candler Dobbs Professor and chair of the Department of Mathematics and Computer Science.

The field of computer science is growing so fast that the U.S. Department of Labor shows that it outpaces all other occupations in the U.S.

But while women have made big gains in many fields, and currently earn 57 percent of all undergraduate degrees, the percentage of women who receive CS degrees is the smallest across STEM fields, according to the U.S. Department of Education.

The increase in demand is part of the reason behind the math and computer science department’s proposed split next year, which will create a standalone CS department.

That, in turn should draw more women and underrepresented minorities to the field, he says.

“Computer science is a very rational process, but it is best coupled with very creative thinking,” Sunderam says.

Grant and Nair’s pilot coding class could become the standard to teach computational thinking. Last fall, almost 100 people applied for 25 spots in the non-credit class that teaches programming in Python.

More than half of the students in the course were women or people of color who are learning coding as a vehicle to understand the underlying logical process of computer science.

“Diversity of thought is something they don’t talk about enough in computer science, but we understand it fully at Emory,” Sunderam says. “We are in a great place to create our own legacy of what computer science can be.”

As a leading STEM major, computer science may not be the first discipline to come to mind when thinking of the liberal arts. But the field emphasizes the same critical thinking and problem-solving skills that are the foundation of the Emory College’s teaching excellence.

It can be the focus of a technical career, now Grant’s career path. She arrived at Emory having spent a year in France in high school and at first planned to study French and political science. She had a limited science background, but was so skilled and passionate about math that she completed AP calculus her sophomore year of high school.

That ability, and a passion for languages, has proven to be a natural fit for computer science. The design and analysis she has since learned also feeds her desire for a career that can make a difference and also allow her to collaborate and learn from others.

She has completed a software development internship in Europe, helping design a seating algorithm for a movie chain there.

“I don’t think I went 45 minutes on those projects without asking a question, or someone else asking me a question,” Grant says. “Every single bit of code is someone’s thought process, and there are so many ways to do calculations. It’s such an interactive way to work.”

The foundation for a professional career

Nair took that first CS course mostly out of curiosity. She found that she loved the logical flow of the programming principles and data structures.

That’s why even when she shifted from plans for medical school to business school — with a focus on finance and information systems and operations management — she wanted computer science to remain a foundation.

Nair’s interdisciplinary approach has paid off. She has a job lined up with investment banker Raymond James after graduation, where she will work as an analyst, helping with mergers and acquisitions of technology and business companies, for two years.

But she hasn’t forgotten her first love. Her combination of technology and business, she says, should lay the groundwork for a career at Apple Music, Spotify or another music-oriented tech company.

Her goal is to work in development or strategy, helping users as they create playlists or try to find new bands or genres.

“Going into the consulting side of a tech firm instead of the development side, you still need to have a level of understanding of the work being done,” Nair says. “It’s very exciting to be the person who can communicate between the two sides, where you see the idea and see how it works.”

Emory professor Avani Wildani had that same excitement when she discovered computer science years ago. Long before Google and Silicon Valley made the field a ticket to riches, computer science rewarded attention to detail in trying to solve complex logical and mathematical problems.

She appreciated that framework and has since used it to figure out the puzzle of how the brain works. As an assistant professor in computer science, Wildani’s work calls for understanding first how computers save information by duplicating it, then reverse engineering how such a process might work in the human brain.

Emory is fertile ground for research that connects neuroscience and computer systems, she says, just as it is for developing students who ask such big questions.

“If you can get into Emory, you have the verbal and logical ability to excel in computer science,” Wildani says. “Even better, we have students from every different background here, which means they all have different ways of thinking but we know they are all academically talented.”

Emory College also has made a concerted effort to hire faculty who represent that diversity. For instance, this year the department welcomed associate professor Dorian Arnold, who studies high-performance computing systems.

In addition to his new appointment as Distinguished Speaker for the Computer Research Association, Arnold also leads the Tapia Celebration of Diversity in Computing.

For her part, Wildani co-runs the technical program for the Grace Hopper Celebration, the world’s largest conference for women technologists.

“There has been a study that shows the earlier you encounter women in computer science, female students stay with it and do statistically better, and male students do just as well,” says Joyce Ho, an assistant professor of computer science who serves as the faculty advisor for Girls Who Code Emory.

“It's great to see the enthusiasm of 20 Emory students committed to mentoring younger girls in computer science,” she adds. “We will not only empower these girls but also grow and diversify the field of computer science.”

Grant and Nair agree. They have benefitted from mentors who are women and people of color and are likewise eager to pass along their knowledge at Girls Who Code.

The group, which meets with high school and middle school girls for two hours every week for a year, has a succession plan that will see other female CS majors and minors take over next year. The effort will still focus on allowing girls to explore computer science on any platform they choose.

“People as a whole are becoming more interested in computer science, so it’s important for Emory to show that women, people of color, people with disabilities and really everyone are a part of that,” Nair says.