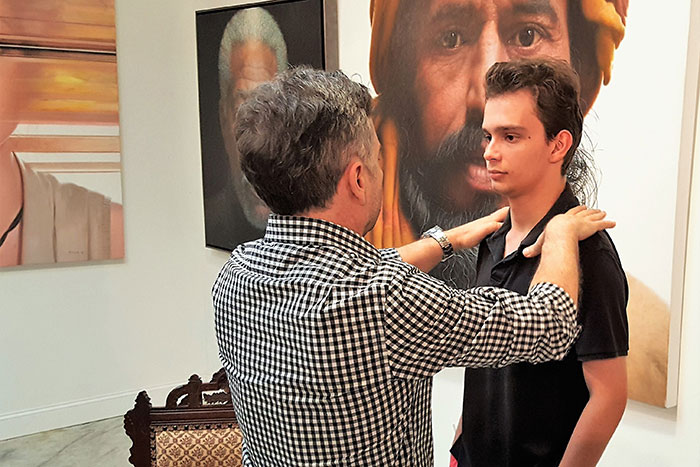 Ross Rossin (back to camera) and his son, Michael, in Rossin’s studio. 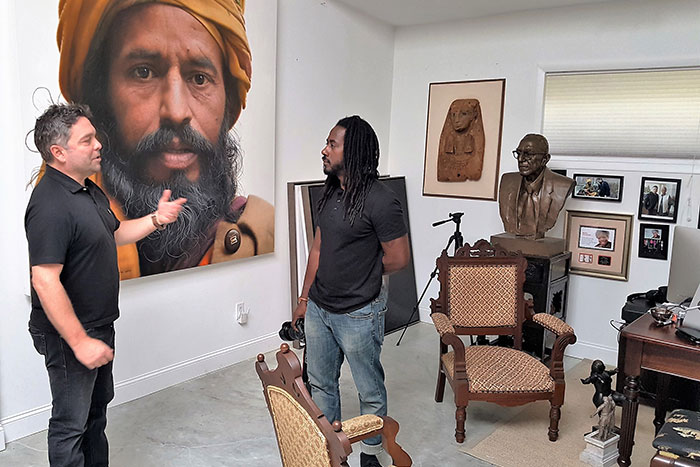 Ross Rossin and Carlton Mackey, director of the Ethics and the Arts Program, in Rossin's studio. 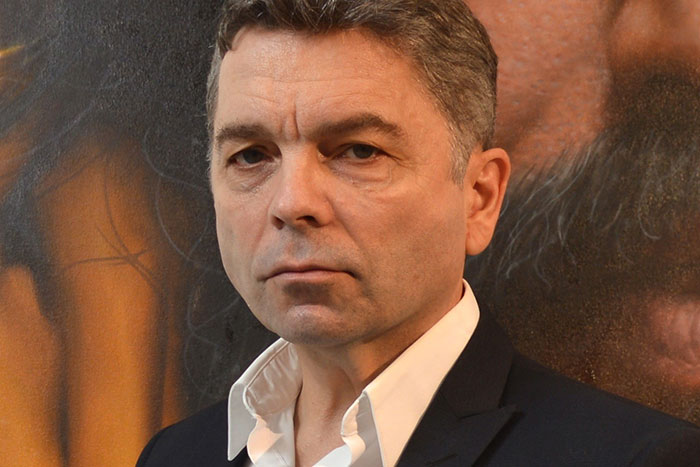 Ross Rossin is the 2017-2018 Donna and Marvin Schwartz Artist-in-Residence.

Donna and Marvin Schwartz Artist-in-Residence at Emory’s Center for Ethics, Ross Rossin, will be unveiling his latest portrait — a new depiction of Frankenstein's creation — on Tuesday, Sept. 19, at 7 p.m. Guests must register in advance.

Renowned portrait artist and Atlanta resident Ross Rossin will be on the Emory University campus this academic year as the 2017-2018 Donna and Marvin Schwartz Artist-in-Residence.

Rossin, whose art hangs in the Smithsonian National Portrait Gallery and was exhibited at the United Nations Palace of Nations in Geneva and the Russian Duma in Moscow, is also known to Atlantans as the sculptor/creator of the nine-foot-tall bronze statue of Hank Aaron unveiled earlier this year at SunTrust Park.

“Ross Rossin will be a singularly powerful addition to the arts community on the Emory campus,” says Carlton Mackey, director of the Ethics and the Arts Program. “His portraiture art is not only masterful in its technical and artistic merit, but is also a catalyzing force for igniting critical conversations around current ethical and social issues.”

Rossin’s initial event at 7 p.m., Tuesday, Sept. 19, will be the public unveiling and discussion of his large-scale portrait of Dr. Frankenstein’s creation described in Mary Shelley’s 1818 novel, “Frankenstein.” The event will be held at the Schwartz Center for the Performing Arts and is open to all free of charge, but guests must register in advance at http://engage.emory.edu/Frankenstein or call Erin Mosley at 404-727-5048.

Rossin’s residency coincides with FACE (Frankenstein Anniversary Celebration and Emory), a year-long university-wide celebration of the 200th anniversary of the novel.

The exclusive corporate sponsor of FACE is Turner Classic Movies (TCM), and Emory is providing support through its Science and Society fund.

“One of the most acclaimed and influential works of science fiction ever written, ‘Frankenstein’ continues to shape debates surrounding science and its complications,” says Paul Root Wolpe, director of Emory’s Center for Ethics, which is spearheading FACE. “It’s a permanent part of the dialogue about the dilemmas we face in technological advancement, scientific experimentation and research, bioethics, artificial intelligence, stem cell research and innovation.”

Rossin’s new depiction of Frankenstein’s creation is expected to highlight the broad influence and implications of the landmark novel. Rossin envisioned not the standard movie portrayal, but a portrait based on his vision of Shelley’s intent.