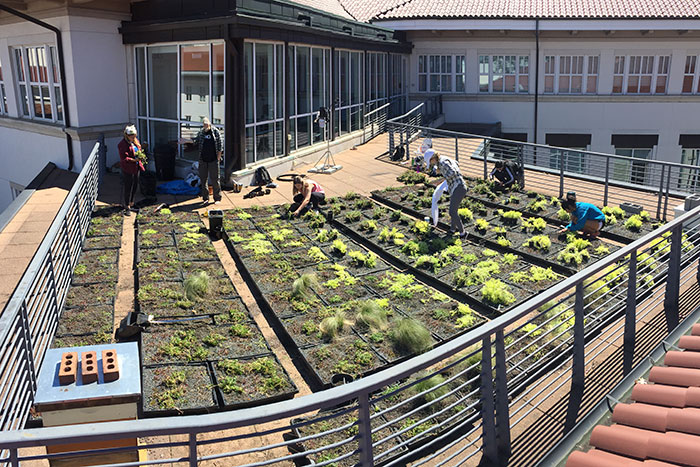 Originally installed in 2008, the green roof atop the Math and Science Center was revitalized this past spring. Photo by Rebecca Park. 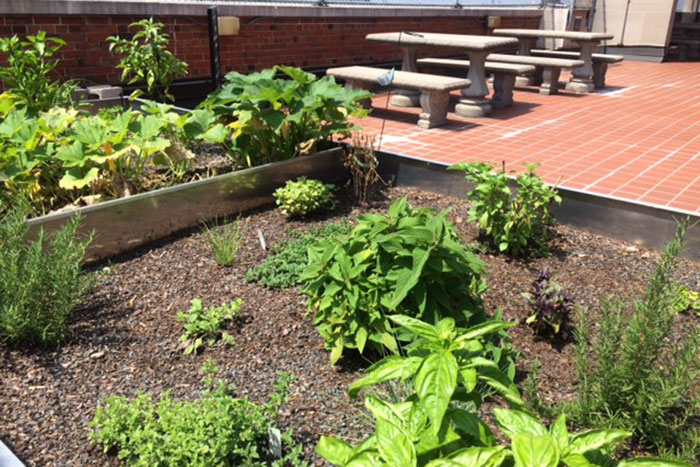 Produce grown on the new green roof at Emory University Hospital Midtown is served in the hospital cafeteria. 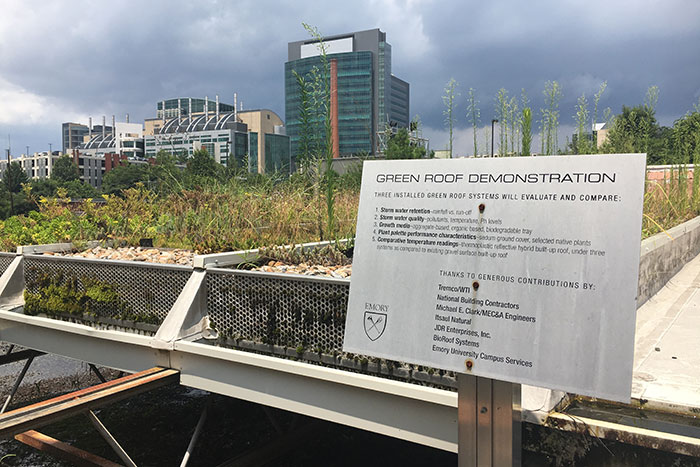 The green roof on Facilities and Maintenance Building B offers the chance to evaluate three green roof systems. 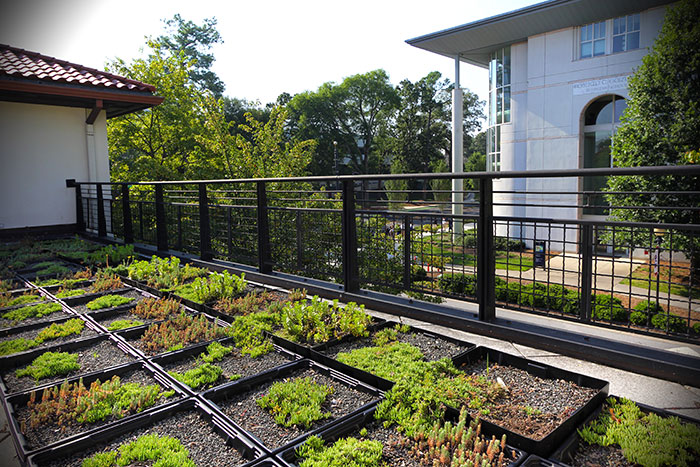 Thomas, Hopkins and Smith halls — known together as the Complex — feature planting trays on their connecting rooftops. Photo by Tina Chang. 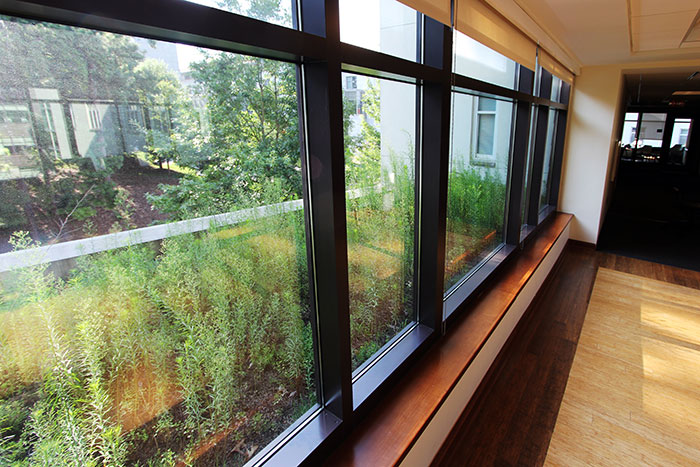 The green roof on Longstreet-Means Hall began with "volunteers," native species whose spores and seeds simply landed there. Photo by Tina Chang.

From campus buildings to pedestrian plazas and now, a vegetable garden atop a university hospital, green roofs are serving Emory’s sustainability vision.

Originally installed in October 2008, the project was part of a student-led pilot study exploring the benefits of green roofs — vegetative roof coverings used in place of tiles or shingles to help disperse summer heat and absorb stormwater run-off.

But almost a decade later, the low-maintenance project had seen better days.

Drought cycles had taken a toll on the succulent plants, which appeared patchy and struggling.

That semester, while taking an “Ecology of Emory” course with environmental sciences senior lecturer John Wegner, she heard the rooftop project described as “something that had kind of fallen by the wayside,” recalls Park, an environmental sciences major who graduated this year and now works with Trees Atlanta.

With a budding interest in green infrastructure — the use of natural resources and processes to mitigate environmental challenges — Park was intrigued.

“I saw an opportunity to learn more about green roofs and to revive an underutilized resource,” she explains.

Today, visitors stepping off the elevator on the fifth floor of the Math and Science Center overlook more than 500 new plants, primarily specimens of drought-tolerant sedum and delosperma, in trays covering 420 square feet of the flat rooftop, just outside.

The revitalized Math and Science Center green roof is part of a growing trend on Emory properties — pockets of dedicated green space, often tucked away high and unseen, that serve a greater purpose.

From residence halls and campus maintenance buildings to pedestrian plazas and now, a vegetable garden atop a university hospital, green roofs have found a welcome and functional home within Emory’s sustainability goals.

“Emory’s 2025 Sustainability Vision includes the goal to replace existing flat roofs with cool, green or solar, when replacement is necessary,” says Ciannat Howett, director of sustainability initiatives. “As a result, I think that we’ll have more green roofs over the coming decade at Emory.”

Across campus, on an open-air plaza that stretches between the uppermost floors of Hopkins and Thomas residence halls, a light breeze skims over plants and new patio furniture that invites students to linger.

In 2003, the city of Atlanta piloted a 3,000-square-foot green roof on the fifth floor of City Hall, and cities across the nation have embraced versions of eco-roofs, a concept that stretches back to ancient Mesopotamia.

“As the conversation about climate change has grown, we’re beginning to hear more about green roofs,” Spicer says.  “It really is a mitigation tool, a way to make sure we employ our knowledge about natural systems and use them in our campus spaces to benefit ourselves and our environment."

Over at Longstreet-Means Hall, a stand of leggy greenery shimmers on a flat ledge just outside an eastern wall of third-floor windows. On the other side of the building, a narrow bed of plants has also found a home.

Many of the plants are volunteers, native species whose spores and seeds simply landed there. “We choose to let it grow naturally and untended,” Cooper explains.

This fall, window clings will be installed to “help educate people about green roofs and what they are seeing here,” he says. “To have this visible in residence halls helps keep sustainability in the consciousness of students.”

The garden that gives back

Twice a day, sprinklers are programmed to water the raised beds, now lush and overflowing with tomatoes, cucumbers, zucchini, peppers, squash and nearly a dozen different herbs, all planted only a few months ago.

“It gets the best sun possible,” says Shari Creech, EUHM building support services manager. “The tomatoes have flourished — just about overgrown in some spots. I’m very proud of it.”

The idea behind the plot, which shares space with concrete picnic tables outside the Woodruff building’s 8th floor public safety offices, was to provide fresh, locally grown organic produce to patients, their families and hospital staff. Much of this season’s bounty has already found its way to the cafeteria salad bar, she says.

A cool approach to sustainability

Across campus, green roofs are pulling double duty, offering cooling environmental benefits as well as enjoyable places for students and staff to gather.

On a recent morning, Wegner stood atop the Math and Science Center green roof aiming an infrared temperature gun at a nearby rooftop.

By 10:30 a.m., the iconic red tile roof was 123 degrees. By comparison, the green roof plant trays measured 20 to 30 degrees cooler. That’s fairly typical, says Wegner, who will teach a class this fall in biophilic and green design.

Wegner finds Emory’s development of green roofs encouraging. “Given the fact that we are land poor, it’s hard to deal with stormwater in an appropriate way,” he says. “And as a university, we should have a teaching purpose. Green roofs can do both.”

Back in 2008, as the green roof was installed at the Math and Science Center, an experimental demonstration plot was also being created on a flat roof atop Emory’s Facilities and Maintenance Building B.

But sometimes, Emory’s green roofs aren’t so hidden from the public eye. Consider these three plazas, which overlay campus walkways and parking decks:

Park sees something hopeful in the fact that green roofs are now being seen as a viable, functional option, at Emory and beyond.

“Researching this topic gave me a vision for the future — one in which all of our infrastructure is greener and more sustainable,” she says. “It may sound kind of futuristic, but I think it is the future. That’s the way our cities are going to be more comfortable and livable.”