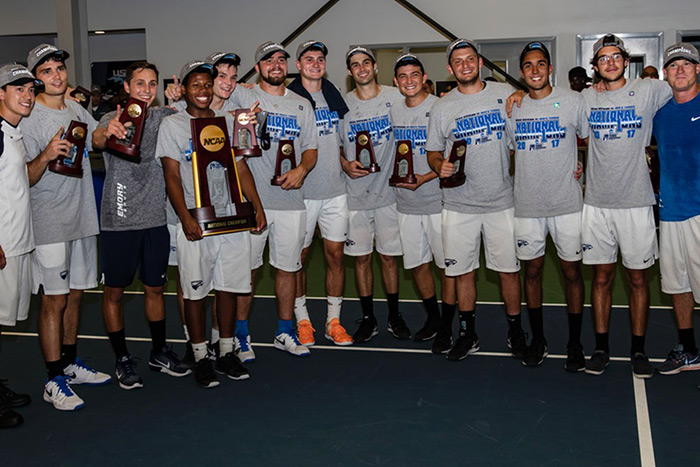 The Emory men's tennis team won its fourth-ever NCAA Division III Championship on May 24, besting Claremont-Mudd-Scripps in the title match. 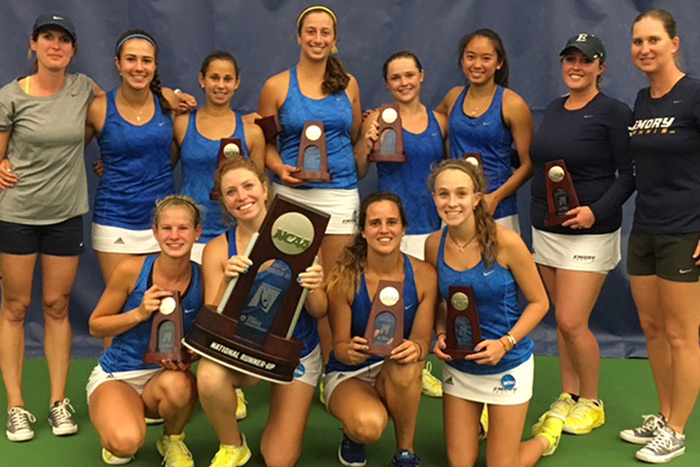 The Emory women's tennis team placed second in the NCAA Division III Championships, falling to Williams College in a hard-fought match on May 24 to finish as the national runner-up. 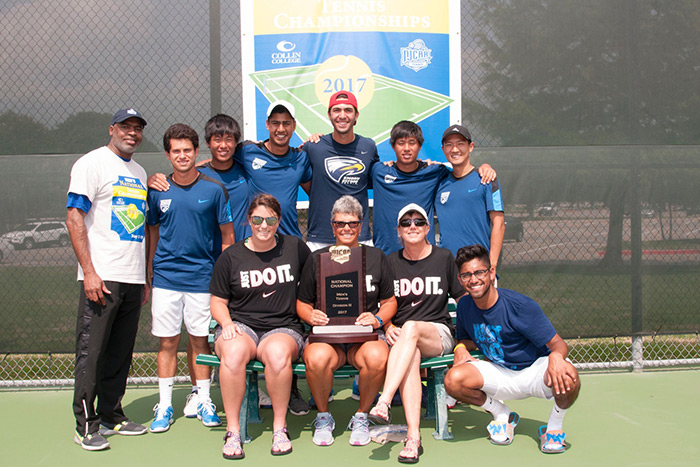 The men's tennis team at Emory's Oxford College won its third-consecutive NJCAA Division III Championship, beating out eight other teams in the national competition, held May 15-18.

It's been a banner season for Emory tennis: The varsity men's team won its fourth NCAA title, the varsity women's team placed second in the NCAA Championships, and the Oxford College men's team notched its third-consecutive NJCAA championship.

The No. 2-ranked Emory men's tennis team captured the program's fourth-ever national title on Wednesday evening, defeating No. 3-ranked Claremont-Mudd-Scripps (CMS) in the finals of the NCAA D-III Championships.

The Eagles won their 14th straight match and closed out their season at 22-4 following a 5-2 victory over the Stags who finished at 32-4. The match was played at the Strang-Voges Tennis Center on the campus of the McCallie School in Chattanooga, Tennessee.

In the finals, Emory jumped out to a commanding 3-0 lead after sweeping the doubles portion of the competition. The Eagles' No. 2 team of junior Max Renke and Adrien Bouchet pocketed the first point of the match with an 8-6 decision over Jake Berber and Glenn Hull. With the score tied at 6-6, Renke and Bouchet broke the Stags' serve to take a one-game lead before holding serve to post their 17th win of the campaign against eight defeats.

Shortly after, the No. 3 tandem of junior David Omsky and sophomore Jonathan Jemison dispatched Jake Williams and Julian Gordy, 8-1, upping their season slate to 23-7 while providing Emory with a 2-0 advantage. At first doubles, junior Scott Rubinstein and sophomore James Spaulding won the final three games against Nikolai Parodi and Daniel Morkovine, breaking the Stags' duo twice, in coming away with an 8-6 victory, which raised their record to 20-10 on the year.

CMS got on the board at six singles when Alex Brenner manufactured a 6-4, 6-1, triumph over Rubinstein. The Eagles inched closer to the national crown when Jemison's 7-6, 6-2 decision over Hull at No. 2 gave them a 4-1 cushion. The win was Jemison's ninth straight and improved his overall singles mark to 26-5, 21-4 in the spring. The Stags stayed alive and drew to within two points when Nikolai Parodi topped Aman Manji at No. 1 singles, 4-6, 6-2, 6-3, ending his 11-match win streak.

With the three remaining singles matches all in third sets, Emory finally claimed the title when Bouchet clawed his way to a 5-7, 6-1, 7-5, verdict over Morkovine at No. 3, breaking at 5-5 and then holding. It was Bouchet's 11th consecutive win and raised his overall record to 19-6, 16-5 in the spring.

After the team portion of the NCAA Division III Championships, the Eagles had four representatives in the Singles and Doubles Championships. Manji, the No. 2 seed in the 32-player field, fell to Bowdoin College's Luke Tercek in a first-round match on Thursday morning. Jemison defeated No. 7 seed Kai Yeun Leung of Skidmore College in Thursday morning's first round, then was defeated by Chicago's Erik Kerrigan in the second round on Thursday afternoon.  Rubinstein and Spaulding competed in doubles as the No. 3 seed out of 16 tandems and beat Skidmore's Leung and John Wynne in the first round on May 25, then lost to Chicago's Kerrigan and Ninan Kumar in the quarterfinal.

The No.-3 ranked Emory University Women's Tennis team saw its quest to repeat as national champions thwarted on Wednesday as the Eagles fell to No.-4 ranked Williams College, 5-4, in the NCAA Division III National Championship, also held at the Strang-Voges Tennis Center.

The showdown between the two perennial Division III powers did not disappoint as the title match lasted over four and half hours and was decided by a three-set match at first singles featuring two of the top singles players in the country.

With the contest knotted at 4-4, it came down to the decisive match point on court one between juniors Bridget Harding and Juli Raventos. Harding got off to a strong start, taking the first set 6-1, but Raventos answered with a 6-3 second set win to force a winner-take-all third set. Raventos started fast, grabbing a 3-1 lead, but Harding held serve to cut the deficit to 3-2. Unfortunately, that was as close as the Northport, New York, native came as Raventos rattled off three straight points to seal the title for the Ephs.

Williams opened the match by swiping the first two doubles points to take a 2-0 advantage. At third doubles, Julia Cancio and Emily Zheng defeated seniors Paula Castro and Michelle DeMeo, 8-5. Cancio and Zheng broke a 3-3 tie in the match with three straight points en route to the 8-5 win.

At second doubles, senior Michelle Satterfield and sophomore Daniela Lopez battled back from a 5-0 deficit to cut Williams' Chloe Henderson and Hannah Atkinson lead to 5-4. However, the Ephs pair was able to win the final three points in the match to record the 8-4 victory.

Harding and senior Katarina Su regained some momentum with an outstanding hard-fought, come-from-behind win at first doubles to send Emory into singles action down by a point. Williams' Raventos and Linda Shin won two straight points to move in front 7-5, but Harding and Su answered with four consecutive points of their own, including saving four match points to earn the break at 7-7 before going on to win the match 9-7.

Emory then saw back-to-back victories at third and fourth singles to take a 4-3 advantage heading into the final two matches. Lopez beat Atkinson on court three while Su knocked off Shin on court four. Both matches were decided by identical 6-4, 6-4 scores. Williams saw a victory by Leah Bush over Satterfield at second singles, 7-6 (4), 6-2 which tied the score at 4-4 and put all eyes on court one where Raventos edged out Harding for the championship point.

Emory concludes the season with a 17-7 overall record whereas the Ephs finish the year at 20-4. The two programs have now combined to win 16 of the last 17 Division III National Championships.

In the Singles Championships, Emory's Harding — the No. 4 seed — won her first-round and second-round matches in straight sets on Thursday, advancing to Friday's quarterfinals, where she defeated No. 5 seed Brooke Donnelly from Washington and Lee before losing to Wesleyan's Eudice Chong (who went on to win the national championship) in the semifinal round. Emory's Satterfield also won her first- and second-round matches in straight sets, but was defeated by Rebecca Ho of Washington-St. Louis in the quarterfinals.

In the Doubles Championships, the Emory team of Harding and Su — seeded No. 3 — beat out a pair from Denison in Thursday's first round of competition to advance to Friday's quarterfinals, where they bested Emily Chen and Maryann Zhao of Pomono-Pitzer. The pair lost in the national semifinal round to Claremont-Mudd-Scripps' Nicole Tan and Lindsay Brown.

The men's tennis team at Emory's Oxford College claimed a three-peat victory by winning the National Junior College Athletic Association Division III national tournament for the third year in a row. The Eagles ended their 2016-17 season by beating out eight other teams in the national competition, held May 15-18 at Collin College in Plano, Texas.

From the first point Oxford was ready to go, winning 8 out of 10 of their matches on the tournament’s first day, including a huge upset at number three singles. Raghuram won his play-in match then bested the number one seed in the first round.

The Oxford Eagles went undefeated on day two, winning 10 out of 10 of their matches, which included wins at number one singles for Cabral and number three doubles for Sonawala and Henry Hua against Brookdale Community College. The next day, number one doubles (Cabral and Pioso) won the consolation doubles final.

Oxford College, located on Emory's original campus in Oxford, Georgia, is one of two choices for entering Emory undergraduates. As juniors, students who begin their studies at Oxford move to Emory's main campus in Atlanta, where they can study the liberal arts in Emory College, nursing in the Nell Hodgson Woodruff School of Nursing, or apply to Goizueta Business School.