Breast cancer beyond the pink ribbon 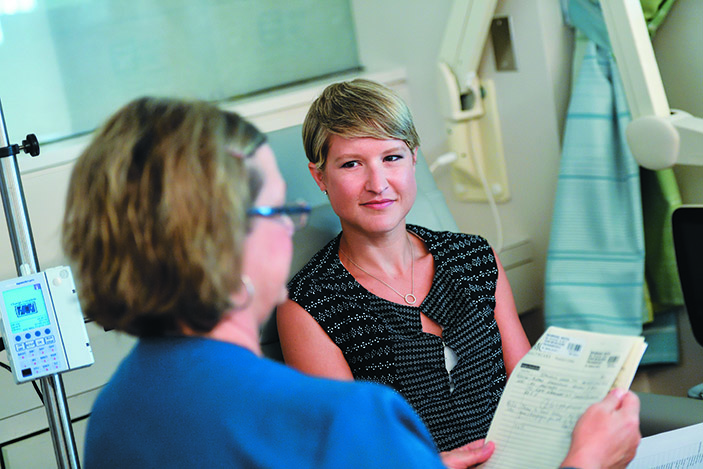 Since Kristen Sheubrooks' mother had breast cancer twice, she and her sister had been tested already and both were found to be BRCA carriers. At 34 years old, she received a diagnosis of metastatic breast cancer. 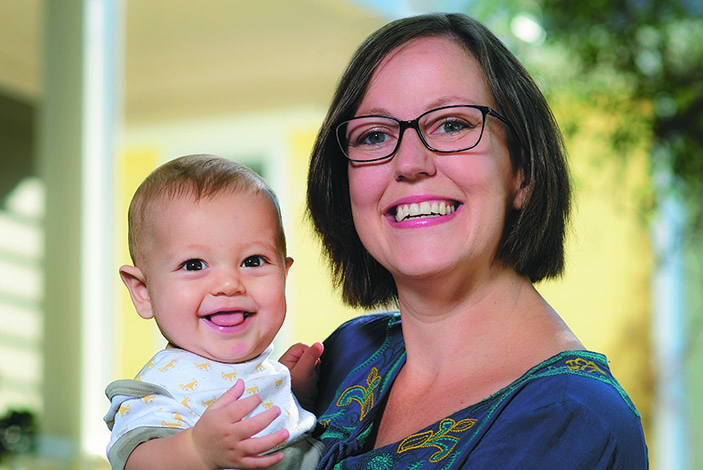 Baby Derin was a surprise blessing, born less than a year after Deja Er was diagnosed with triple negative breast cancer and only five months after she completed radiation therapy treatments at Winship. Mother and son are thriving. 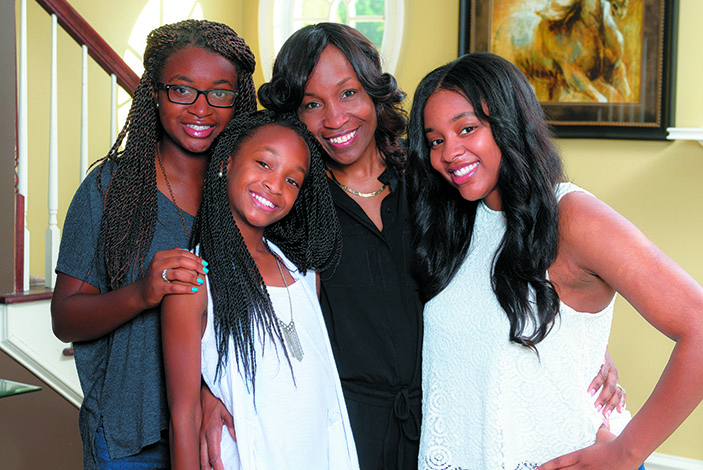 Angela Yamini was 43 years old when she was diagnosed with metastatic breast cancer. She received chemotherapy before undergoing a lumpectomy and radiation therapy at Winship. Two years later, she is in remission. 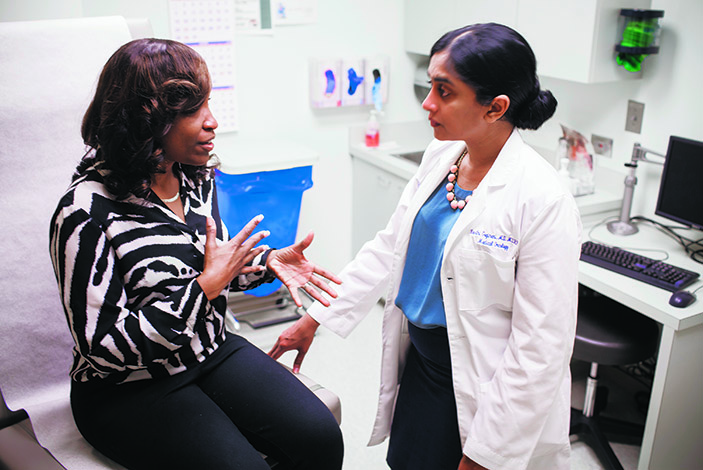 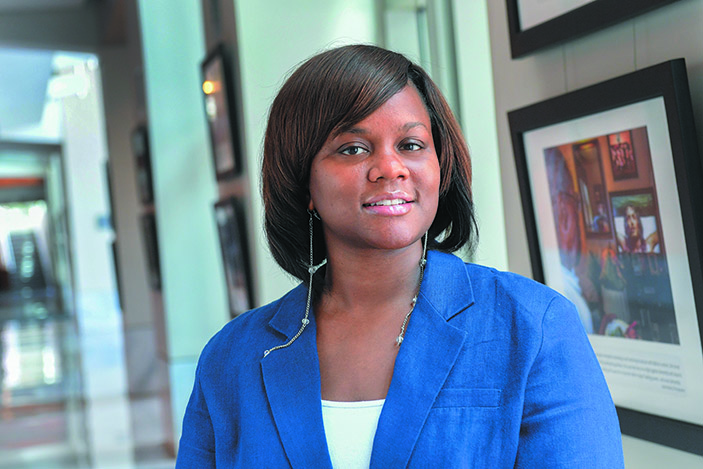 Tracey Monday was diagnosed with breast cancer at the age of 26. 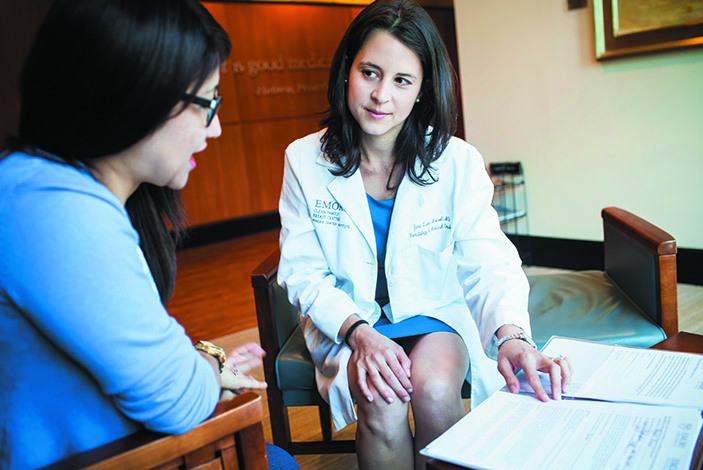 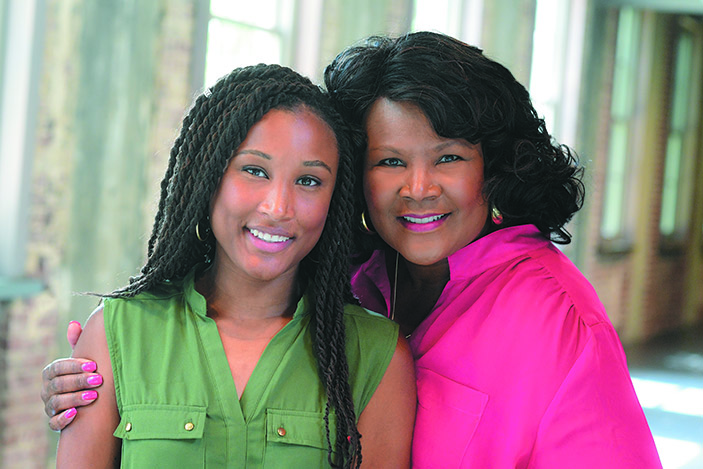 "Attitude gets you through," says patient and Winship Advisory Board member Sandra Jackson (right), pictured here with daughter Jenna. 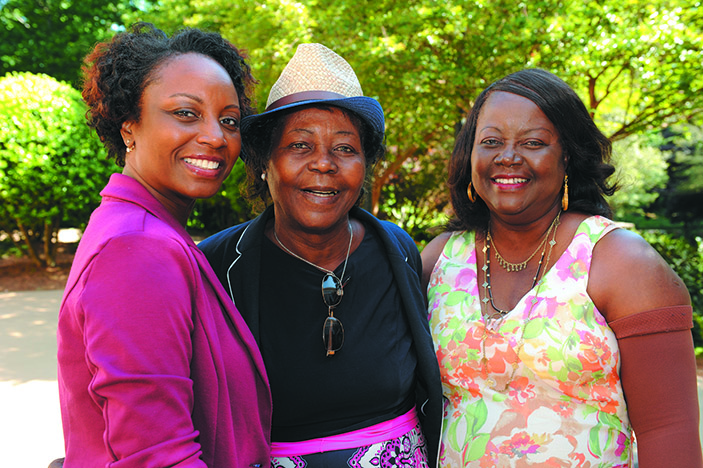 Pamela Bryant, her mother Juanita Bradley, and aunt Jennie Williams, are all breast cancer survivors. Bryant went on a clinical trial that cut the length of her radiation treatment in half.

When Pamela Bryant was diagnosed with triple negative breast cancer at age 48, she came to Winship Cancer Institute to get the most advanced treatment for this aggressive cancer.

Some of the complexities that can shape a woman's encounter with breast cancer:

Youth
Breast cancer in women younger than 40 makes up less than five percent of all cases diagnosed in the United States, but this group has made up nine percent of Winship breast cancer patients in the last two years. Breast cancer treatment in younger women also brings with it unique concerns, including its affect on family planning.

Chemotherapy and Pregnancy
Pregnancy has a complex relationship with breast cancer risk. The hormones of pregnancy, such as estrogen, are thought to speed up breast cancer growth, although having children early in life also lowers the risk of developing breast cancer later. Sometimes a breast cancer diagnosis interrupts a woman's family planning in a more direct way, such as when a woman is diagnosed while pregnant.

Recurrence
Once estrogen-responsive breast cancers relapse, they can be difficult to treat. The FDA recently approved a drug combination that attacks such cancer a different way may keep it at bay.

Kristen Sheubrooks was 34 years old, the mother of a boy in preschool and a baby girl, when she received a diagnosis of metastatic breast cancer. She knew she was at high risk for the disease, but the timing seemed especially horrible, she says. "We had to explain that Mommy would be tired a lot, and that my hair would look different," Sheubrooks says. Women who are diagnosed with breast cancer before the age of 50 are usually recommended to undergo genetic testing. Sheubrooks did not need to struggle with this decision. Since her mother had breast cancer twice, Sheubrooks and her sister had been tested already and both were found to be BRCA carriers.

She had been having regular preventive screenings, alternating MRI and mammogram, every six months since her 20s. A second pregnancy in 2014 broke up that routine. When her daughter was five months old, she felt a lump in her breast. While getting it checked, she learned that a spot also had been detected on her liver.

Her local Georgia doctors recommended that she come to the Glenn Family Breast Center at Winship Cancer Institute and enroll on a clinical trial designed specifically for BRCA carriers with metastatic breast cancer. Doctors she consulted in New York advised the same thing. The trial is testing an experimental drug called veliparib, in combination with two standard chemotherapy drugs, carboplatin and paclitaxel. Researchers think that BRCA-linked cancers, in particular, may be more sensitive to this drug.

When Sheubrooks started on chemotherapy, it felt like "the worst stomach flu you can imagine, times ten," she says. But anti-nausea medications helped and later her drug regimen was adjusted to allow for the least toxicity while she remains on the study.

Sheubrooks does not know whether she has been receiving veliparib, rather than placebo, but she is willing to guess that she has, because her response to the medication regimen was so dramatic. The lump in her breast is now undetectable, while the spot on her liver has been barely detectable for a few months, she reports.

Women who are diagnosed with breast cancer before the age of 40 tend to develop more aggressive cancers. And BRCA1 carriers are more likely to develop triple negative breast cancer (see definition in sidebar). These are complicating factors doctors know about. But every woman fighting breast cancer faces choices.

The care teams at Winship's Glenn Family Breast Center have the experience and training to advise women on the choices they must make, and to design treatment regimens for their unique circumstances.

One of those "unique circumstances," breaking any sort of "one size fits all" approach, is that of young women diagnosed with breast cancer. Breast cancer in women younger than 40 makes up less than five percent of all cases diagnosed in the United States, but this group has made up nine percent of Winship breast cancer patients in the last two years. Most young women do not get annual mammograms, so these cancers tend to be more advanced due in part to the fact that they go undetected until a patient or physician feels a lump during a physical exam. Even when comparing cancers at the same stage, breast cancers that occur in younger women tend to be less likely to be treatable with hormone therapy, and have a higher risk of recurrence and metastasis.

Breast cancer treatment in younger women also brings with it unique concerns. Chemotherapy as well as endocrine therapy (such as tamoxifen) can affect ovarian function, resulting in irregular periods and contributing to early menopause. That cuts into time a woman may have planned for pregnancy and childbirth. Early menopause can affect a younger woman's health in other ways, such as reduced bone density.

"Our team approach can provide benefits to women who have these needs," says Mylin Torres, a radiation oncologist and director of the Glenn Family Breast Center at Winship. "We make sure they have quick access to fertility consultation, genetic counseling, or a plastic surgeon, so there's minimal delay in starting their cancer treatment."

Winship oncologist Jane Meisel describes a patient in her 20s, whom she advised to consider measures to preserve fertility. The patient began crying and said that two other doctors she had visited had not brought up the topic.

"These are the patients who keep me up at night," Meisel says.

Winship patients who need a consultation on fertility can usually obtain an appointment within 24 hours, says Jessica Spencer, medical director of Emory's Reproductive Center. Options include egg or embryo preservation, drugs that may be able to reduce the ovaries' exposure to chemotherapy, and alternatives such as adoption or surrogacy.

For Tracey Monday, who was diagnosed with breast cancer when she was just 26, the question of genetic risk had some sharp teeth, because her mother had undergone treatment for ovarian cancer just a couple of years before. As Monday was preparing to start chemotherapy, her mother's cancer came back. Her genetic testing did turn up a BRCA variant, but it was not identified as a contributor to breast cancer risk.

A recent survey of young breast cancer survivors throughout Georgia, conducted by Winship genetic researcher Cecelia Bellcross and colleagues, found that only half reported being referred or recommended for genetic counseling. A companion survey of Georgia doctors also found gaps in health providers' understanding of breast cancer genetic risk, says Bellcross, who has developed online tools to help women decide whether to undergo genetic testing.

"Many women think: 'I've already had breast cancer. What difference does it make?'" says Bellcross. "What they don't realize is that with BRCA, there's an increased risk of a second breast cancer, or ovarian cancer. They don't want to have to go through this a second time."