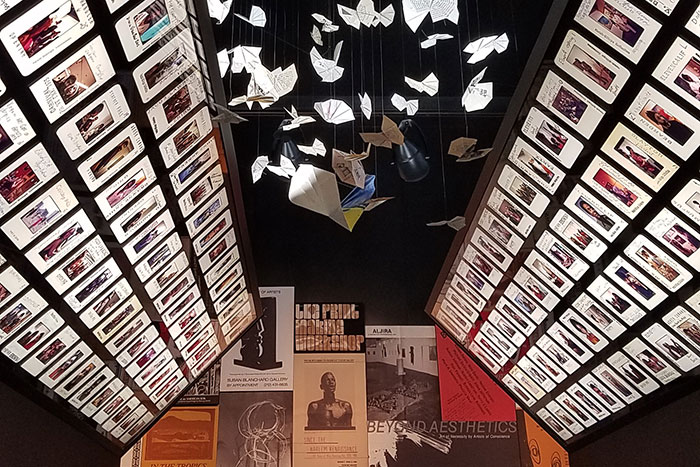 As part of "Still Raising Hell: The Art, Activism and Archives of Camille Billops and James V. Hatch," area artists were invited to help create the Billops-Hatch Butterfly Project, an origami art installation. 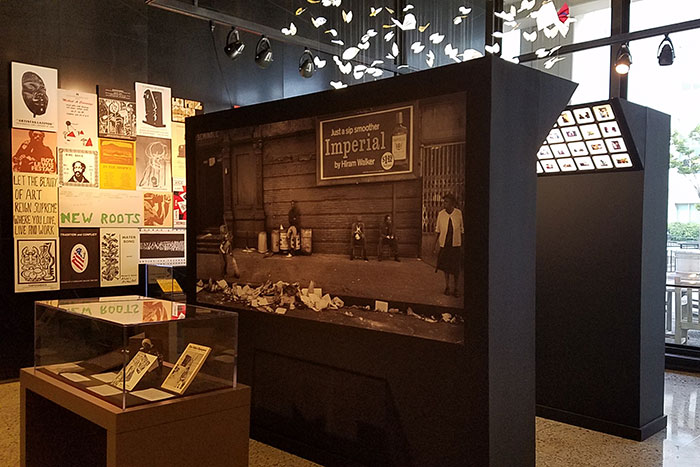 The project presents a floating array of 250 original origami butterflies intended to represent deceased black artists -- many of whom were friends of the couple -- who have ascended from the physical world onto another plane. 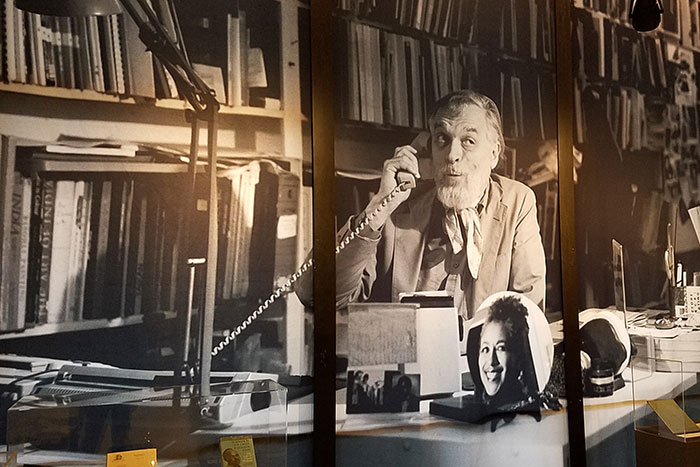 Featured items in the Emory exhibition include photographs, books, original artwork, play scripts, theater posters, exhibition programs and related ephemera. This photo of James Hatch at his desk was taken by Terrence Reece. 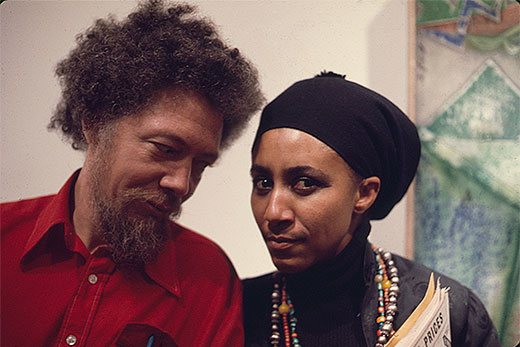 Camille Billops with artist Benny Andrews at the opening of the "Bearden and Blues" exhibit, 1975. Credit: Camille Billops and James V. Hatch Archives at Emory University. 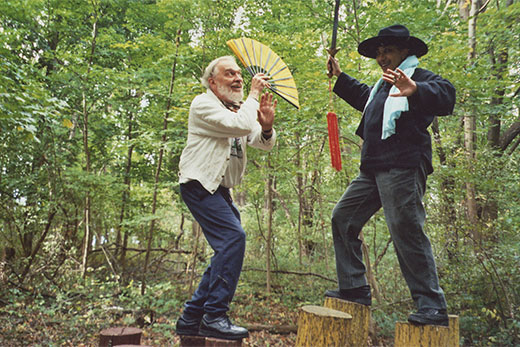 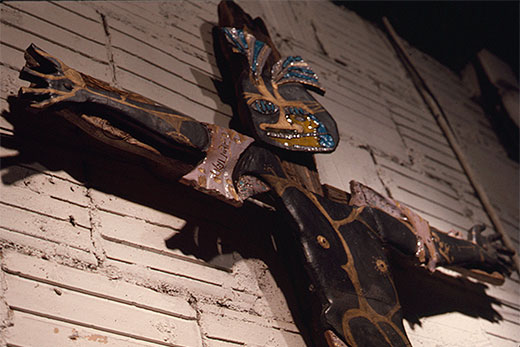 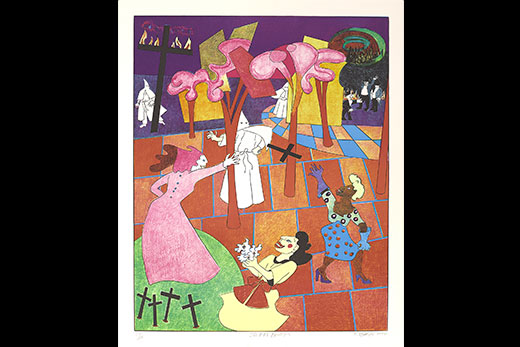 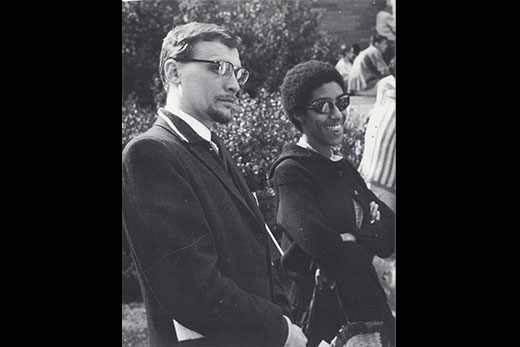 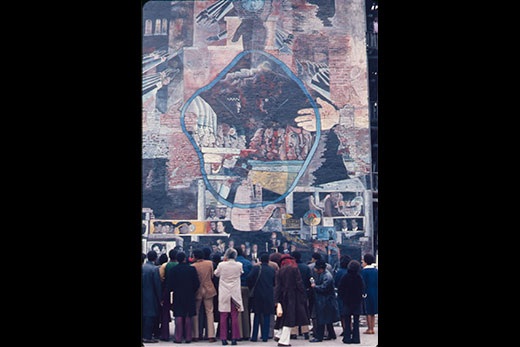 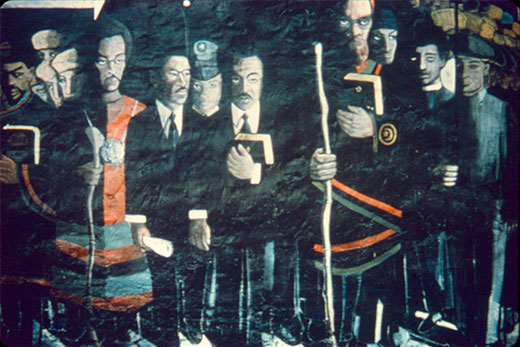 “Still Raising Hell: The Art, Activism and Archives of Camille Billops and James V. Hatch" showcases materials from one of the most important collections related to 20th-century African American artists, theater and art history.

A lifetime of arts and letters: Camille Billops and James Hatch

During this time, they also acquired a trove of books, manuscripts, photographs and art. Now, roughly 40 years later, this vibrant multimedia collection has become one of the largest and most comprehensive private gatherings of African American art and culture in the world.

The exhibit, which runs Sept. 15 through May 14 in the Schatten Gallery of Emory’s Robert W. Woodruff Library, will explore themes related to creativity, social justice and community, art and activism, and the importance of history and memory.

Widely considered to be one of the most important collections of materials related to 20th-century African American theater, art history and African American artists, the Billops-Hatch archives are long overdue for public exploration, according to exhibition curator Pellom McDaniels III, who serves as curator of the Rose Library’s African American collections.

“For more than 50 years, Camille Billops and James Hatch have been stewards of African American history and memory,” McDaniels says.

“This exhibition accounts for their tremendous efforts to preserve materials related to the development of the arts as a form of expression, and as a medium for speaking truth to power for African Americans,” he says.

The exhibition also explores the lives and careers of the dynamic couple and their relationships with artists such as Owen Dodson, Benny Andrews, Norman Lewis, Vivian Browne and Faith Ringgold, McDaniels adds.

With much of it now housed at Emory, the Billops-Hatch collections contain over 13,000 slides of work by African American artists; 4,000 black and white photos documenting writers, performers and visual artists; a library of more than 10,000 books and periodicals; written materials including doctoral dissertations and letters; and an array of ephemera.

The archive also includes more than 1,000 African American-authored published and unpublished play scripts (dating back to 1879), hundreds of theater programs, and more than 1,500 audio and video interviews conducted with artists, writers, poets and others involved in creative endeavors.

Together, Billops, a filmmaker, artist and activist, and Hatch, an author and theater historian, collected these materials over the past 50 years and began donating a significant portion of their Hatch-Billops Archives in New York City to Emory in 2002. With its home in the Rose Library, the collection is accessible to students, faculty, researchers and the public.

A selection of audio and video interviews that Billops conducted for Artist and Influence, a journal of black American cultural history published by the Hatch-Billops Archives from 1981-2012, will run on multimedia kiosks in the exhibition. Additionally, a short documentary about Billops and Hatch will show continuously.

As part of the exhibit, area artists were invited to help create the Billops-Hatch Butterfly Project, a visual origami art installation conceived in honor of Billops and Hatch.

The project presents a floating array of 250 original origami butterflies intended to represent deceased black artists — many of whom were friends of the couple — who have ascended from the physical world onto another plane. This ascension is represented by the butterflies, which appear to float skyward above the exhibition.

The butterflies were constructed from a variety of materials, including copies of 1960s-era Negro Digest journals. As visitors enter the exhibit and look upward, they see the print from various articles folded into butterflies as well as the unique covers of each journal.

In addition, the project includes individual “showpiece” butterflies created from material from the studios of three Atlanta artists. The materials were derived from art shows, figure studies and even casual doodles to be folded into butterflies, creating remixes of their original work.

An online exhibit launches with the opening of the Billops-Hatch Exhibition. An illustrated print catalog of materials from the Billops-Hatch archives, with a selection of essays by McDaniels and others, also will be available.

Related events include "Call and Response: Contextualizing African American Presence in American Theater" on Saturday, Sept. 17, from 9 a.m. to 5:30 p.m. in White Hall, Room 208, featuring distinguished local and national scholars addressing the issue of the presence and influence of African Americans on performance arts and theater.