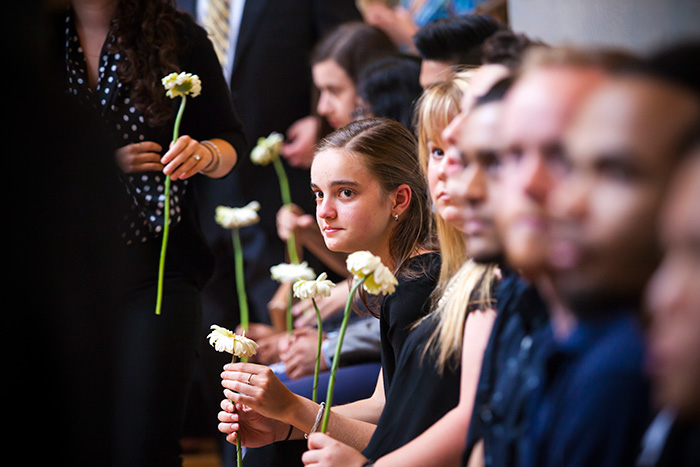 The Emory community gathered Thursday in Cannon Chapel for an interfaith vigil honoring the lives of Abinta Kabir and Faraaz Hossain. 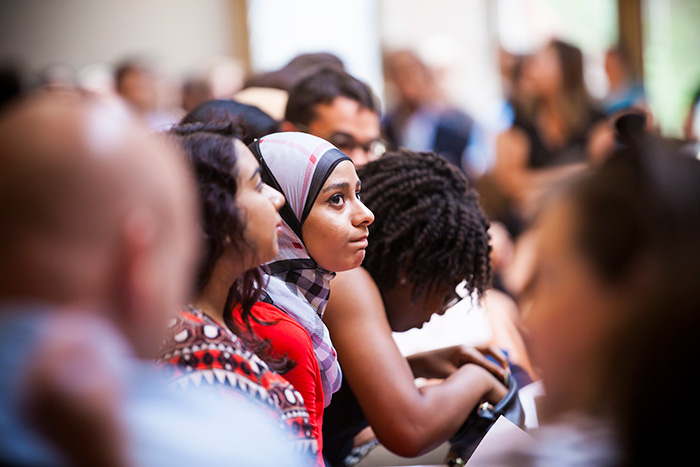 Attendees filled Cannon Chapel to capacity, with some standing during the service and others watching on screens in an overflow room. 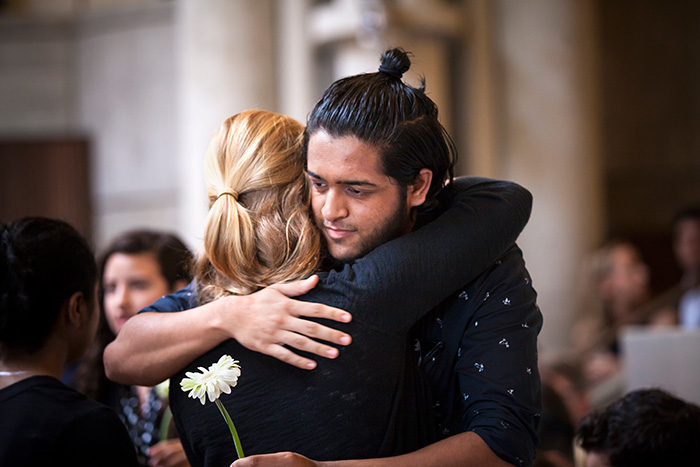 Emory students, faculty and staff members exchanged hugs and comforted each other as they arrived. 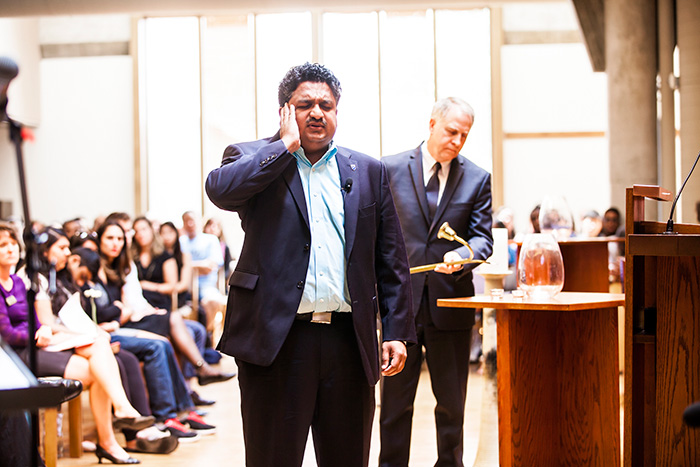 Isam Vaid, Muslim religious life adviser in the Emory Office of Spiritual and Religious Life, gave the call to prayer as Emory President James Wagner lit a candle for hope. 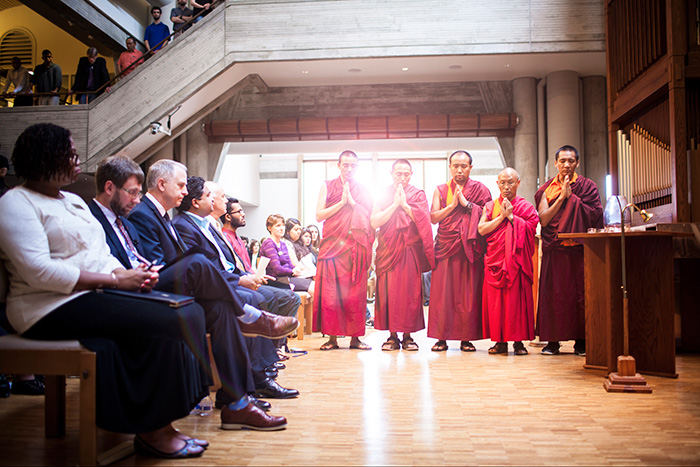 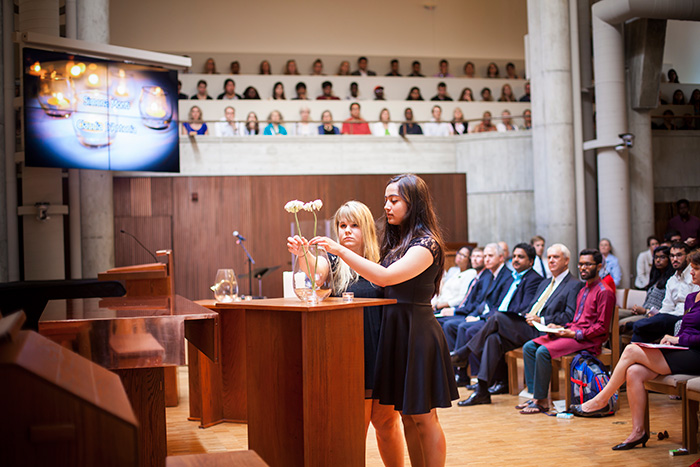 As the names of the 20 people killed in the Dhaka attacks appeared on the chapel's video screen, volunteers came forward in pairs to place flowers representing each of the victims. 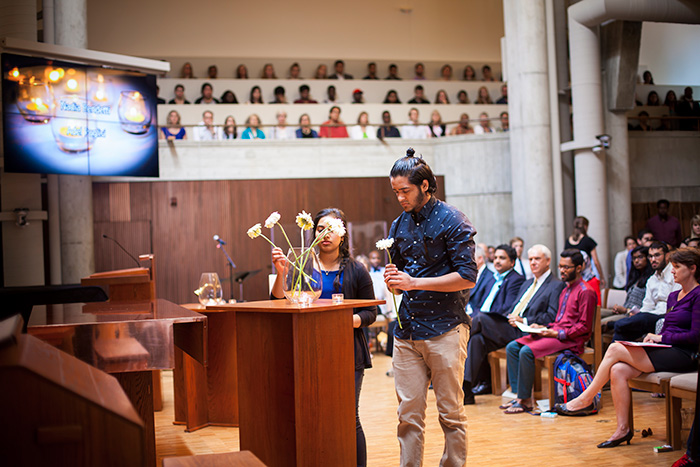 The flowers were placed in two vases by students, faculty and staff as drums pulsed in the background. 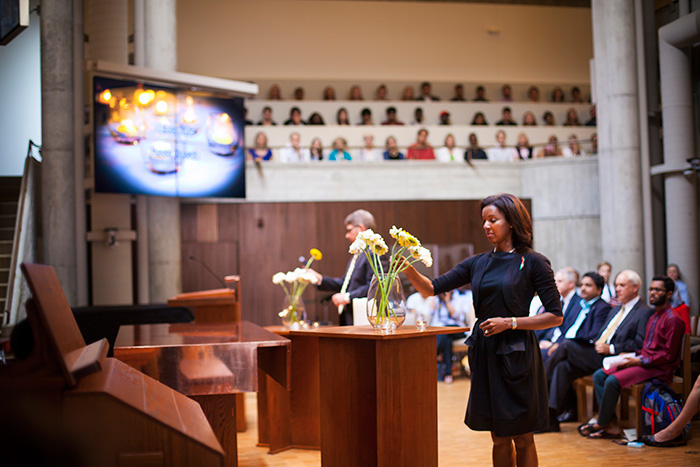 The music stopped and the chapel was silent as Erika James, dean of Goizueta Business School, and Douglas Hicks, dean-elect of Oxford College, placed the final two flowers, representing their students. 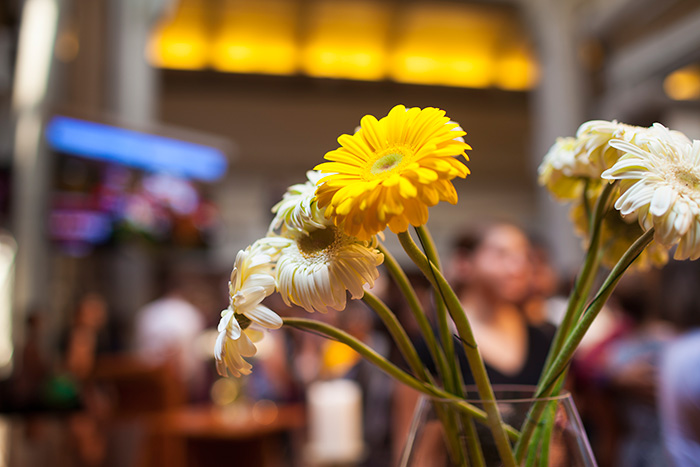 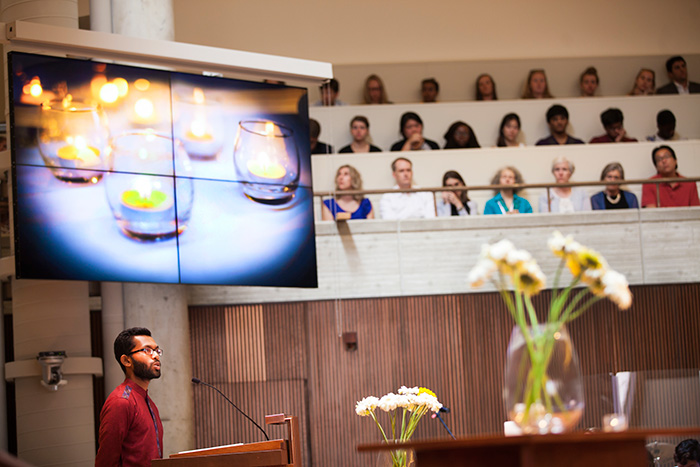 Rifat Mursalin, a Dhaka native and 2016 graduate of Emory College, knew Faraaz Hossein and reflected on the legacy that he and Abinta Kabir leave for both the Emory community and the world. 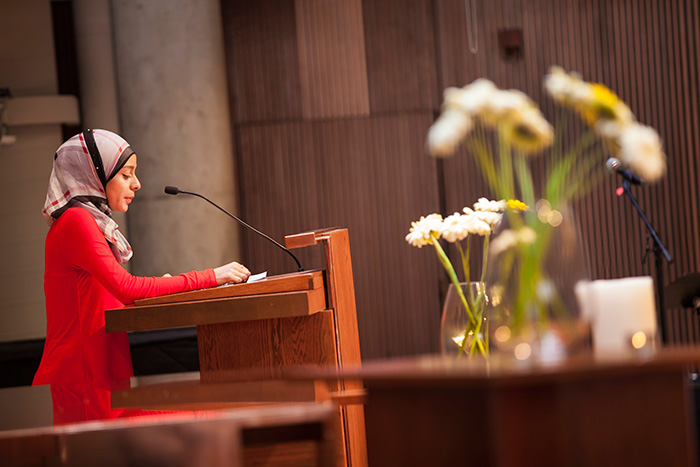 Oxford College student Salma Solimon, who knew both students, read a poem by Hannah Senesh reminding attendees that "there are people whose brilliance continues to light the world even though they are no longer among the living." 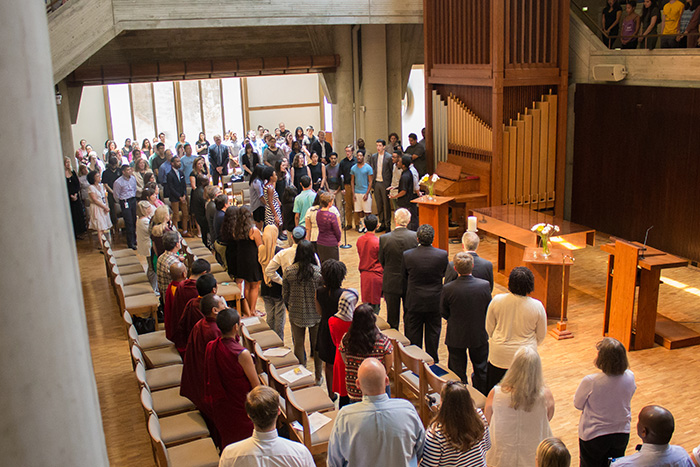 The interfaith vigil ended with the Emory Alma Mater, sung by students and alumni from the University's a cappella groups. 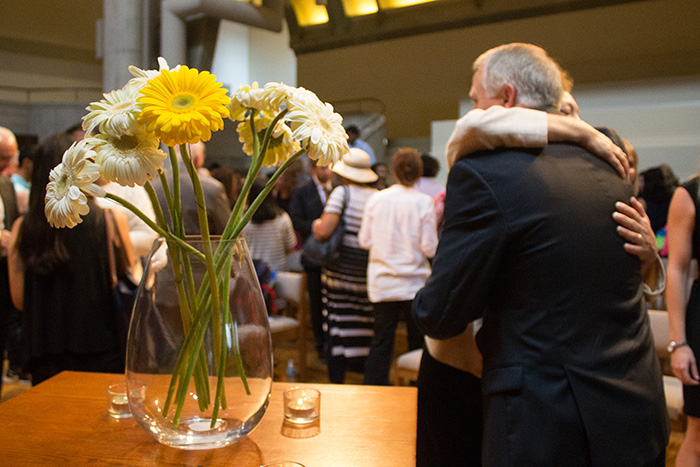 After the interfaith vigil, attendees mingled in Cannon Chapel and also had the opportunity to leave written prayers and messages. 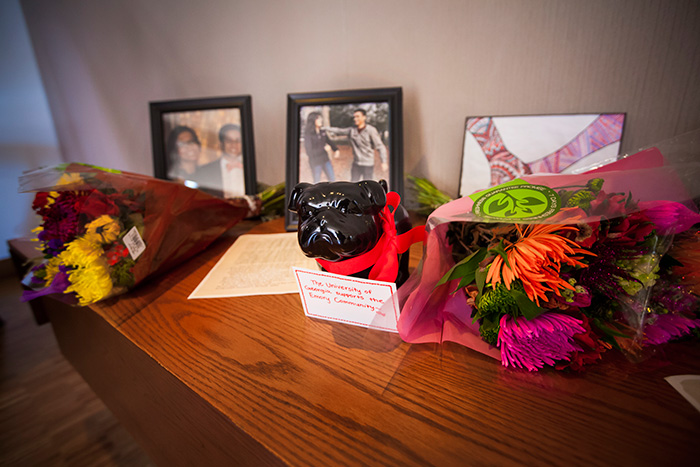 A table displayed photos of Abinta Kabir and Faraaz Hossain, along with mementos that had been left in their honor, including a drawing left on the steps of Oxford College's Seney Hall and a bulldog left at the flagpole on the Emory Quadrangle. 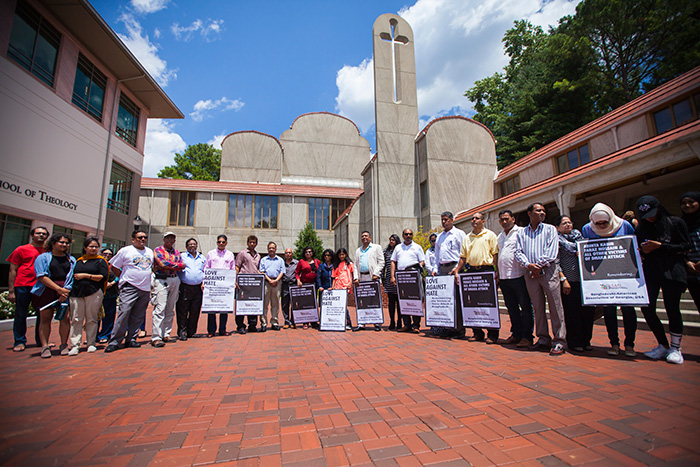 Members of the Bangladeshi-American Association of Georgia gathered outside of Cannon Chapel with signs offering prayers and calling for "love against hate."

Emory students Abinta Kabir and Faraaz Hossain were remembered for the light they brought to campus in their roles as “true servant leaders” at an interfaith vigil held Thursday, July 7, in Cannon Chapel.

An overflow crowd of Emory and Oxford College students, faculty, staff and University leaders turned out for the hour-long vigil, which honored the lives of the 20 individuals killed in last week’s terrorist attack in Dhaka, Bangladesh, as well as all victims of violence.

Kabir, 19, was a rising sophomore at Emory’s Oxford College from Miami, Florida. Hossain, 20, a junior from Dhaka, was a fall 2015 graduate of Oxford College who had begun studies at Goizueta Business School in January. Both were graduates of the American International School of Dhaka (AISD).

The students were in Dhaka this summer to visit family and friends. On the night of July 1, they met fellow AISD graduate Tarishi Jain, a sophomore at the University of California, Berkeley, at the Holey Artisan Bakery, when heavily armed militants stormed the restaurant.

Survivors of the siege noted that the gunmen began separating Muslims from non-Muslims and released some Bengalis. They also reported that when the attackers told Hossain he could leave, but that Kabir and Jain could not, the Emory student chose to stay with his friends — an act of heroism that has been widely heralded throughout Bangladesh and across international news and social media outlets.

A time to come together

During the vigil, rotating images were projected onto a large screen: Kabir and Hossain posing playfully on the Oxford quad; sunflowers, roses and candles placed on the steps of Oxford's Seney Hall following news of their deaths; Kabir and Hossain standing shoulder-to-shoulder, beaming with youthful energy.

Bridgette Young Ross, dean of the chapel and spiritual life, welcomed attendees with a series of quotes that spoke to the power of light over darkness, ranging from Jesus of Nazareth's “You are the light of the world” to His Holiness the XIV Dalai Lama's “I find hope in the darkest of days and focus in the brightest” to the 13th-century poet and Islamic scholar Rumi's “The wound is the place where the light enters you.”

Additional memorial services will be planned for this fall when the full student body returns to campus, she said.

In recognition of each life lost in the Dhaka attack, faculty, staff, students and alumni approached the altar with Gerbera daisies, placing them in twin vases. All the blossoms were white, save the final two flowers placed by Douglas Hicks, dean-elect of Oxford College, and Erika James, dean of Goizueta Business School. Those two flowers glowed a sunny yellow, in memory of Kabir and Hossain.

Oxford College Chaplain Lyn Pace noted that it was fitting that the flowers used in the ceremony were Gerbera daisies, their long stems bolstered by florist wire “so they will be sturdy and hold their heads up nicely,” he said. “Though we grieve, we hold our heads up as we remember and hold up the lives and legacies of those killed.”

At Oxford College, both Kabir and Hossain were widely recognized for their campus leadership — both had served as chairs of the Student Activities Committee’s (SAC) programming committee, tasked with planning a majority of the college’s student social events.

Addressing their impact, Joseph Moon, dean of campus life at Oxford College, read a letter from 2016 Oxford graduate Chase Jackson, who knew both students through his work with the SAC.

Acknowledging the shock and heartbreak felt by fellow students over the loss, Jackson recognized the extraordinary way in which Kabir and Hossain had “touched this community and sparked so much light in our lives.”

“Abinta and Faraaz are true servant leaders,” Jackson wrote. “Their compassion for others was apparent in all of their words and deeds.”

Students grew to appreciate thoughtful conversations with Hossain, his ability to provide wise advice in difficult situations, his characteristic smile “even in the toughest of circumstances, for the sake of others,” Jackson wrote.

Likewise, “Abinta brought the same smile-filled, intentional, loving personality to every SAC meeting,” he recalled — a quality that led students to flock to her room in search of both camaraderie and counsel.

“People were drawn to these two because they were students to trust, to respect and to follow,” he wrote.

Kabir and Hossain demonstrated those gifts especially in their ability to put others before themselves, Jackson noted. “Their selfless spirits paired with the influence they had on others allowed them to achieve amazing things for the greater good of our close-knit community,” he wrote.

In fact, “I believe that for Abinta and Faraaz, our college community seemed to be the very thing that drove them to succeed the most … that encouraged them to go out and change the world for the better,” he wrote.

“It gave them peace, joy and hope — something to live for and something to die for. Faraaz’s sacrifice shows us really just how much the strong bond of friendship and community meant to him.”

Struggling to comprehend the loss, 2016 Emory College graduate Rifat Mursalin, also a native of Dhaka, lamented that news of the attack had meant that “the only two places I have ever called home — Dhaka and Emory — have collided in a brutal, unexpected and tremendously tragic way.”

“My friends back home tell me that it has been raining in Dhaka since that tragic night,” he said. “I don’t think it is rain. Those are the tears of Dhaka as it mourns the lives we lost.”

“We Bangladeshis pride ourselves in our hospitality toward our guests. It’s a crucial aspect of Bengali culture. Dhaka is sorry that it couldn’t protect its own and its guests.”

Calling for prayers for the victims of violence around the globe, Mursalin mourned the loss of the students. “Beautiful, young, precious lives were cut short by this monstrosity, but we will forever carry on their legacy,” he said. “May we all continue in unity in compassion and in our shared humanity.”

In closing, Pace announced that counseling and support services are available to the Emory community, inviting attendees to join in a guided conversation that afternoon with the Emory Faculty Staff Assistance Program and counseling staff from Emory’s Atlanta and Oxford campuses.

He reminded the interfaith congregation that out of grief comes unity and hope, urging those gathered to “create peace wherever we go, to be fully alive and pay attention to each other and the world around us, to encourage and expand our notions of community to leave no one behind or out, and to love all.”