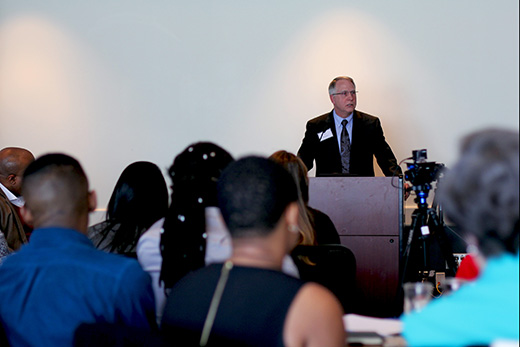 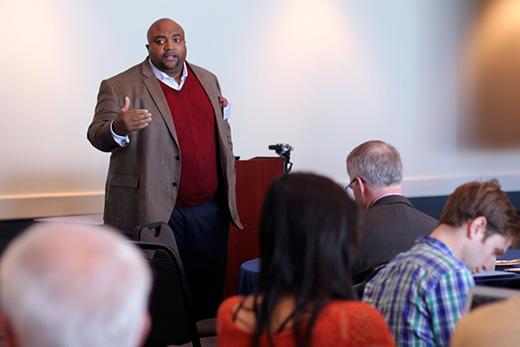 Retreat moderator James Roland, senior director of the Barkley Forum, stressed that the goal of the event was "to create systems that will allow us to be able to sustain efforts to be a better Emory." 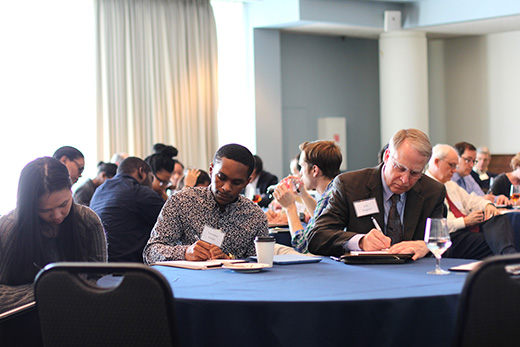 About 100 students, staff and faculty members gathered Friday for the six-hour retreat to share ideas and propose future action steps. 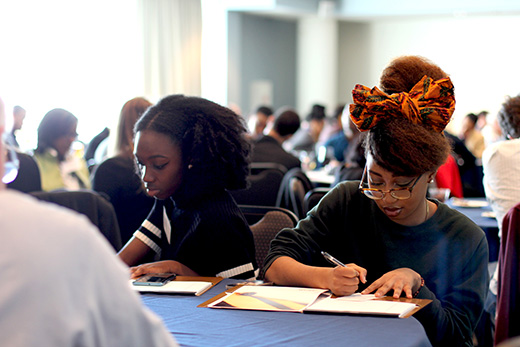 The bulk of the retreat was devoted to translating student issues and concerns into a process to promote change. 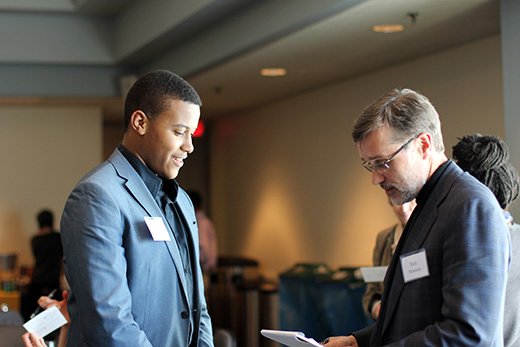 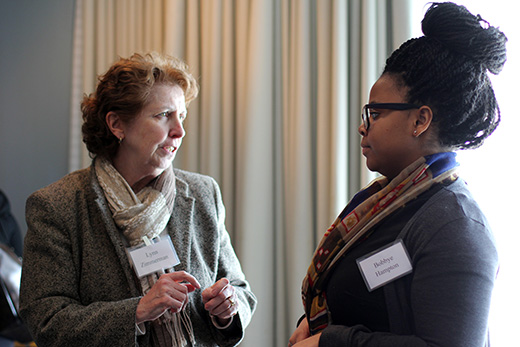 Dividing into a series of working groups, about 100 students, staff and faculty members met for six hours in Winship Ballroom to collectively examine proposed action steps in response to the student demands, which were brought to Emory administrators last November.

The goal of the retreat — and meetings leading up to it — was to produce action steps, timelines and accountability measures to help move student concerns from demands to dialogue to action, according to Ajay Nair, vice president and dean of Campus Life, who framed the event as "an opportunity to further enhance our community of practice by articulating our shared concerns, passions and values.""

The intent was "to do the right thing for all of our students and the university," Nair said. "To seriously and diligently address systemic racial and social justice issues."

"Our goal is nothing less than to reimagine and co-create a racially just campus community," he said.

In opening remarks, President James Wagner expressed appreciation for the "constructive activism" of student leaders who had pressed for dialogue and change, adding that the retreat presented an opportunity to "listen and learn from one another."

Through BSE demands and support echoed from others at Emory, "we have been given a call, a mandate," Wagner noted.

Earlier work through Emory's Transforming Community Project already helped to provide "a vocabulary so that we can have difficult conversations," as well as programs intended to help support campus diversity, he said.

But despite efforts "to face squarely the shortcomings of our institution and the way we treat each other — and to plan strategies for progress," Wagner said there will be no progress "if as an institution and if individually, personally, we fail first … to acknowledge our perpetuations of these circumstances and to seek reconciliation for our past and continuing wrongs."

'To be a better Emory'

Explaining how the process would work, retreat moderator James Roland, senior director of the Barkley Forum debate program, stressed that the ultimate goal of the event was "to create systems that will allow us to be able to sustain efforts to be a better Emory."

Roland predicted that the retreat would only be a first step to subsequent conversation and action. "This won't be one event," he said. "All of you in the room are expected to be change agents."

The bulk of the retreat, which was originally scheduled for January but postponed when the University closed due to the threat of a winter storm, was devoted to translating student issues and concerns into a process to promote change.

Each demand had earlier been assigned to a working group, which made individual presentations, breaking down student demands into discreet issues and offering initial suggestions for action.

Topics were as specific as examining funding for campus student organizations, the diversity of student conduct hearing panels, and how faculty can foster a sense of community in the classroom to finding ways to weave awareness of race and difference into academic settings throughout campus.

Through the Emory Campus Life Dialogue website — a new initiative that features information and resources and a forum for campus concerns — draft reports from each working group are posted online for community feedback.

A step in the right direction

In closing remarks, Emory undergraduate and BSE member Casidy Campbell, a senior majoring in sociology and African-American studies, expressed appreciation for the hard work that had gone into a difficult conversation.

As the University seeks to select a new president and create a new strategic plan, Campbell said she hopes that ideas arising from the retreat would become embedded in both endeavors.

"What we are asking for right now will actually benefit the whole, entire University," she said. "It's not just black students — it benefits Latino students, it benefits Asian students, and it benefits white students."

Wagner noted how the University has evolved over the years into a much more diverse student population — more diverse today than most first-year students experienced at their high schools.

After observing how the Emory community could come together in a determined effort to move beyond history, institutional racism and personal bias, he expressed confidence that change is possible.

"We have the tools, we can do this," Wagner said.

Working groups will continue finalizing recommendations for action steps, which Campbell said in an interview after the retreat that she is eager to see.

"I think this was definitely a step in the right direction," she said.