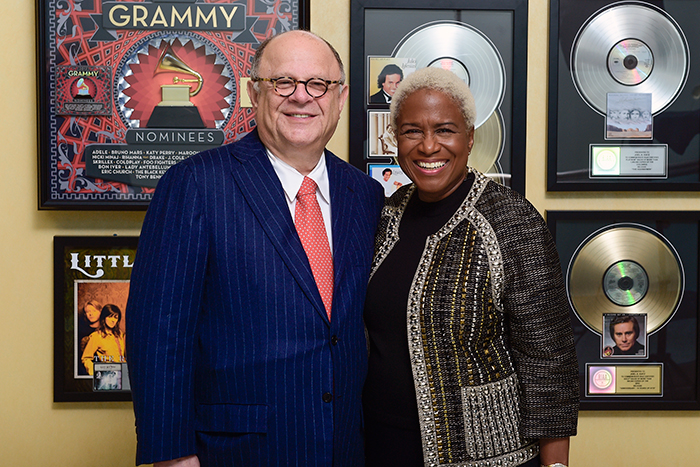 Joel Katz poses with former Atlanta television anchor Monica Pearson at the opening of the Joel A. Katz Music is Medicine Collection. 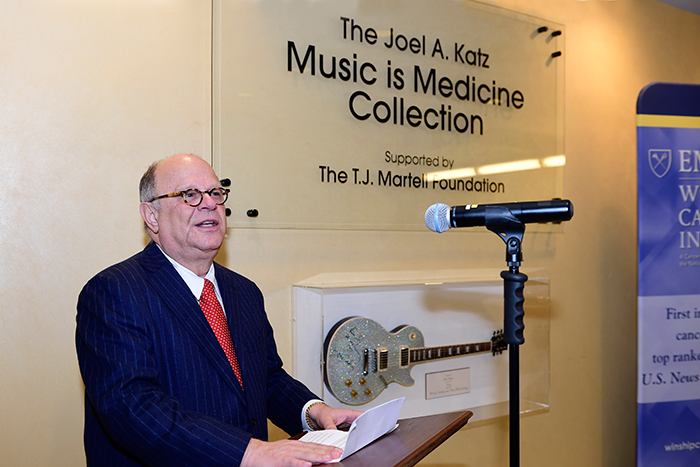 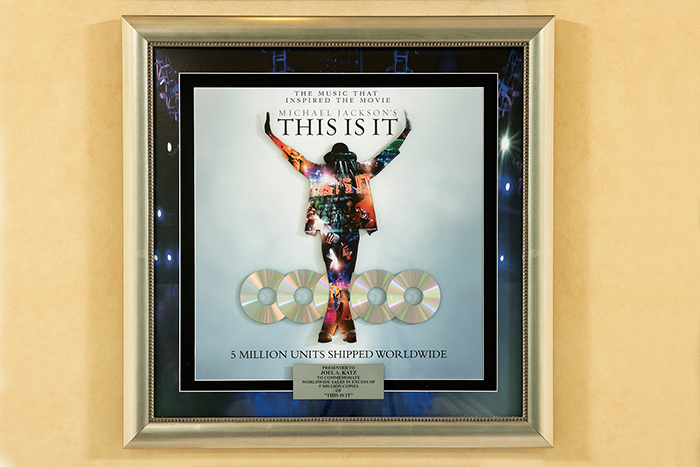 A commemoration of worldwide record sales for Michael Jackson is among the three-dozen items on view in the collection. 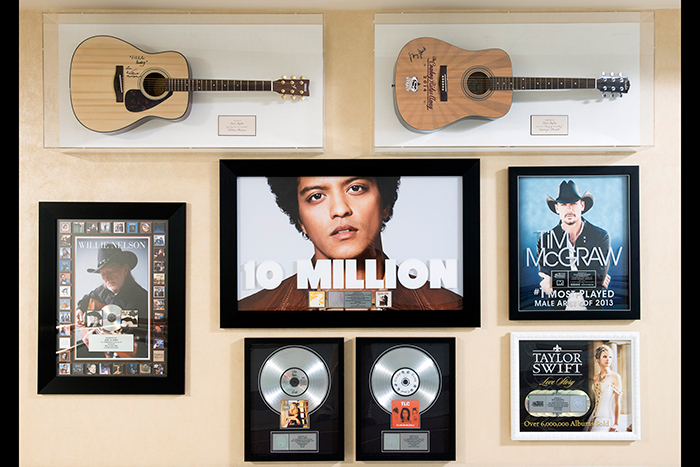 Visitors to the exhibit will recognize many of their favorite music stars among the memorabilia in the Music is Medicine Collection. 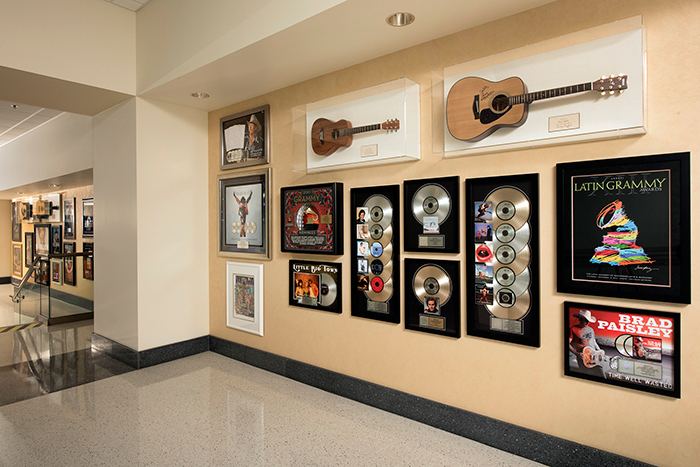 Located on the Tunnel Level of the Winship Cancer Institute, the exhibit is free and open to the public weekdays from 9 a.m. until 5 p.m.

Everyone hit pause on their conversations when Joel Katz stepped to the mic at Emory’s Winship Cancer Institute on Feb. 4, World Cancer Day. Katz — an Atlanta-based entertainment lawyer with his own Billboard ranking — was there to talk about a musical oasis he has created on Winship's Tunnel Level for the enjoyment of patients and families.

Katz conceived of the collection's name in conversation with some of the artists he represents — a musical Who’s Who including Ludacris, Julio Iglesias and Justin Timberlake. He wants patients to be inspired by what they see, press play on their favorite music as they take in the collection, and “be upbeat, lifted from care.”

And how could they not? On view are three dozen items including multiplatinum commemorations of worldwide record sales for Michael Jackson and Taylor Swift; guitars signed by Paul McCartney, Willie Nelson and George Strait; and handwritten lyrics from Alan Jackson.

Katz has crusaded against cancer for decades. He represented former CBS (now Sony Records) executive Tony Martell when he established the foundation named for his son, who died of leukemia at age 19.

“Cancer has taken so many people from me, from all of us,” Katz says. “But I believe so strongly in the hope and treatment Winship offers patients.”

Katz had a close call years ago, when his doctor brought him to Winship for a lump in his chest. Busy though he is, he says “that caught my attention pretty quickly. Within two hours I had an answer. I was okay. I’ve never forgotten how they looked after me.”

Thinking with his heart

The only attorney to be elected to the Georgia Music Hall of Fame, Katz has fielded a crush of A-List clients after the Godfather of Soul, James Brown, sought him out to make a long-ago deal. At the time, Katz was a young lawyer who had opened what he terms a “tiny, tiny” office in Atlanta after leaving a position at the Department of Housing and Urban Development. He also was teaching at Georgia State, work that he enjoyed tremendously.

One of his students was the friend of a friend of the Hardest Working Man in Show Business. The year was 1971, and Brown — in exchange for all that hard work — was negotiating a contract with his new record label, requesting a private jet and $5 million, among other things.

An experienced attorney would have declared such a deal out of reach, but that is not what Brown was seeking. He wanted someone open to possibility, and who better than an untried attorney staring at his silent phone in a tiny office? Katz tells the story to charming effect: “Brown said, ‘You’ve never done one of these contracts, right?’ And I said, ‘Never.’ He said, ‘Great, you’re just what I want.’”

That bond and business relationship lasted until Brown’s death in 2006. Behind Brown a long line of artists formed, led by Willie Nelson, who brought along many of his fellow country stars. Eventually, Katz realized, “I need to start hiring some lawyers; I can’t do this all myself.”

Katz is known as the “dealmaker who thinks outside the box.” In talking to him, the respect he has for the artists he represents is evident. Beyond the individual deals he does for them, he assists artists’ groups, negotiating a 10-year agreement with ABC for the Country Music Association.

Don’t ask Katz to sing or dance; you would run screaming from the room. “However,” he emphasizes, “I can discern talent and what will be sellable to a record or film company. I appreciate great performing and recording talent. I look at these artists as human beings who encounter our same problems.”

Katz credits the incredible generosity of the music industry: “Musicians understand emotion. That’s their business. They think with their heart.”

To the benefit of Winship patients, somewhere along the line they taught a lawyer to do the same.

The Joel A. Katz Music Is Medicine Collection is located on the Tunnel Level of the Winship Cancer Institute. The exhibit is free and open to the public weekdays, 9 a.m. until 5 p.m. Don’t forget your earbuds.