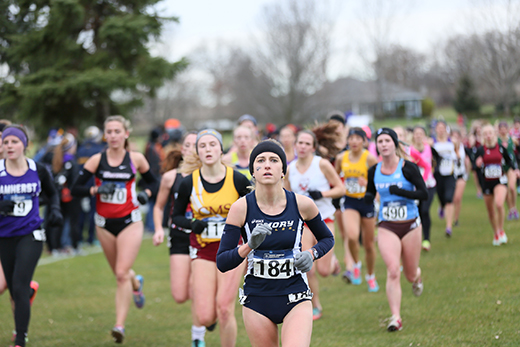 Senior Elise Viox ranked as the women's cross country team's top performer, highlighted by her first-place performance out of 200 entries at the South/Southeast Region Championships. 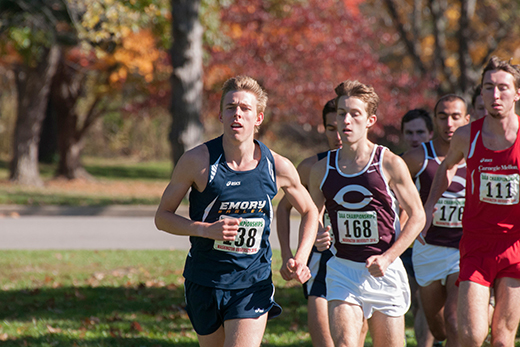 Senior Lukas Mees was the driving force on the men's cross country team, crossing the finish line in the No. 1 spot out of 203 runners at the Regional Championships. 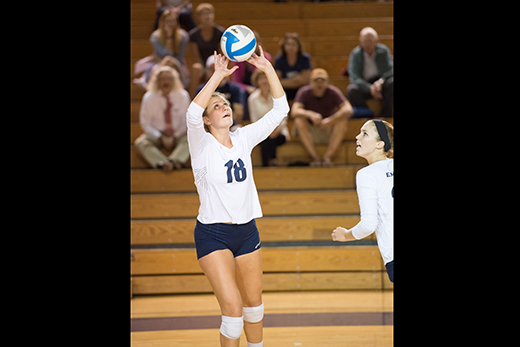 Senior setter Sydney Miles was chosen as a First Team All-American by the American Volleyball Coaches Association for the fourth straight year. 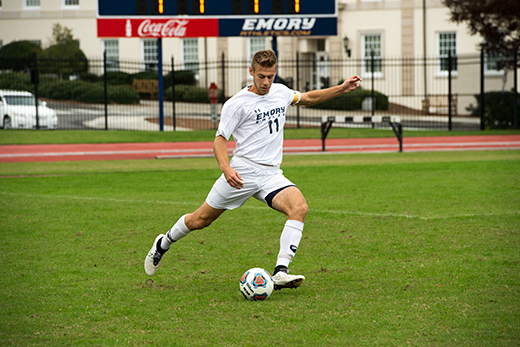 Matt Sherr, a senior and captain of the men's soccer team, was named to the All-UAA First Team for the third straight season. 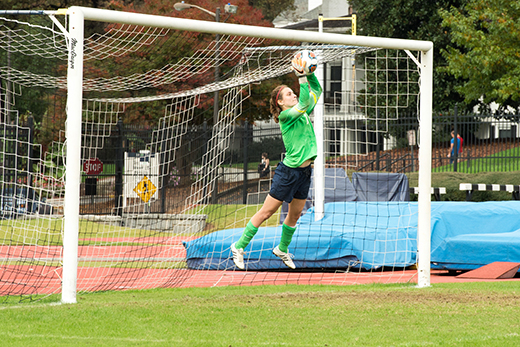 The Emory volleyball team enjoyed another banner season, finishing with an overall record of 34-4, with the win total representing the ninth straight year of 30 or more victories.

The Eagles also played their way into the program’s 20th consecutive trip to the NCAA D-III Tournament, where they advanced to the regional finals. As usual, head coach Jenny McDowell and her club took on a demanding schedule, playing a total of 17 matches against 14 programs that advanced to the postseason, finishing with a 14-3 record in those contests.

Senior setter Sydney Miles, who capped off a brilliant career as the program’s all-time leader in assists, was chosen as a First Team All-American by the American Volleyball Coaches Association for the fourth straight year, the first player in school annals to accomplish that feat and just the third ever in AVCA history. Miles also distinguished herself in the classroom, earing Second Team Academic All-America honors.

A young and talented men’s cross country team displayed a gritty resolve that resulted in the Eagles racing to their second straight appearance in the NCAA D-III Championships.

Emory earned an automatic bid to nationals following its first-place finish at the NCAA South/Southeast Region Championships in Kernstown, Virginia, with its top six finishers all bringing home all-region kudos.

Senior Lukas Mees was the driving force on the team, ranking as the Eagles’ No. 1 runner in all eight competitions. Mees crossed the finish line in the No. 1 spot out of 203 runners at the Regional Championships, making him the first Emory runner to do that since 2003.

Earlier in the season, Mees claimed runner-up honors at the UAA Championships, which enabled him to earn First Team All-UAA acclaim, Emory’s first such honoree since 2009. For his efforts, he was named as the South/Southeast Region Athlete of the Year.

In addition, John Curtin was chosen by the U.S. Track & Field and Cross Country Association as the South/Southeast Region Head Coach of the Year for both men's and women's cross country.

The women’s cross country team maintained its status as one of the top programs in the South, winning the NCAA South/Southeast Region Championships for the second straight year and third time in the past five seasons.

The Eagles’ top spot at regionals propelled them to their 11th straight spot in the NCAA Championships, where they posted a 21st-place finish, their best showing since 2007. Emory also recorded first-place finishes at the Furman Classic and the JSU Foothills Invitational.

Senior Elise Viox ranked as the team’s top performer in all eight meets, highlighted by her first-place performance out of 200 entries at the South/Southeast Region Championships, the first Eagle since 2010 to capture the top spot.

Viox’s final race saw her clock a personal-best 6K time of 22:01 that ranked in the No. 37 scoring spot at the NCAA D-III Championships. Viox was recognized for her outstanding season and selected as the South/Southeast Region Athlete of the Year.

On Sept. 23, Head Coach Sonny Travis won his 400th career game, a 1-0 win over Sewanee. The Eagles were 3-2 against teams that made the NCAA Tournament, including dramatic wins over UAA foes Chicago and then-ranked #17 Washington.

Senior goalkeeper Abe Hannigan closed out his career as the program’s all-time leader with 23 career shutouts. Five Eagles were named All-UAA, led by senior captain Matt Sherr who was named First Team for the third straight season. He added All-Region First Team honors and was selected as a CoSIDA Academic All-American for the first time in his career.

The Emory women’s soccer team ended the 2015 season with a won-lost slate of 8-6-4, the 27th consecutive season that the Eagles had a winning record.

One of the squad’s high moments of the season came in a 1-1 tie against Kennesaw State University, an NCAA Division I team, on Oct. 27. The Eagles played their best game of the season versus the Owls and took a lead early and held onto it until the 81st minute. The double-overtime tie was part of a school record of five straight double overtime games.