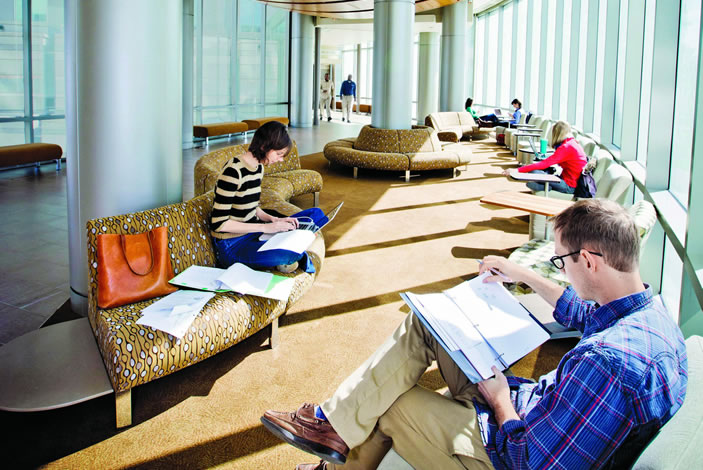 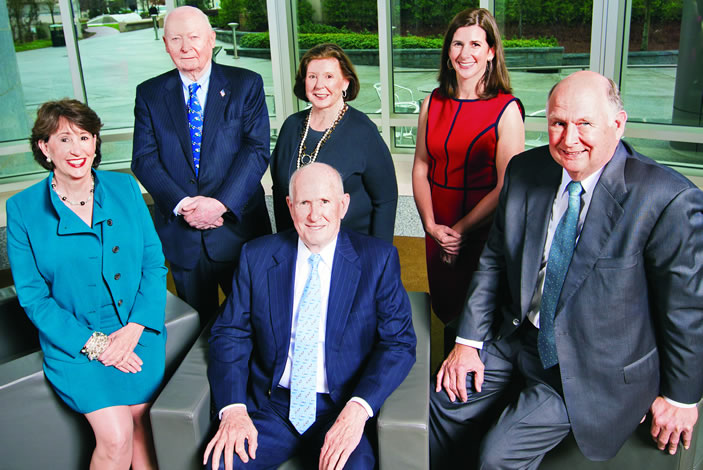 The buildings that comprise the RSPH are named to honor the Rollins family. They include Pam Rollins, Randall Rollins, Gary Rollins, Amy Rollins Kreisler, and Peggy Rollins. Henry Tippie (back row, left) is a trustee of the O. Wayne Rollins Foundation. 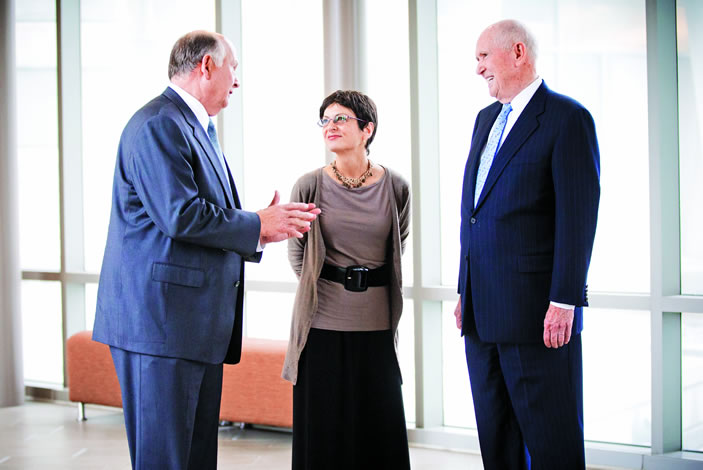 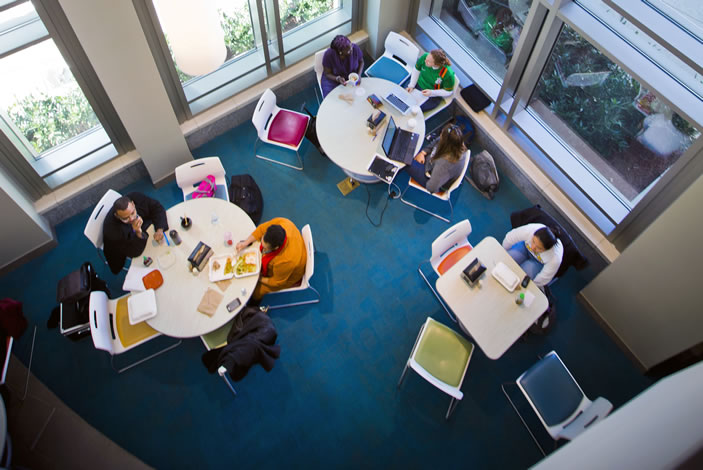 The Claudia Nance Rollins Building provides ample and inviting space for students to meet and study. 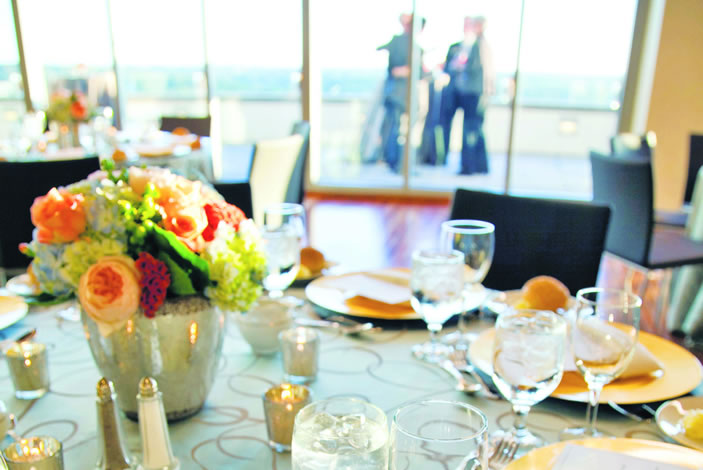 The Lawrence P. and Ann Estes Klamon Room, located in the Claudia Nance Rollins Building, is a popular venue for special events. 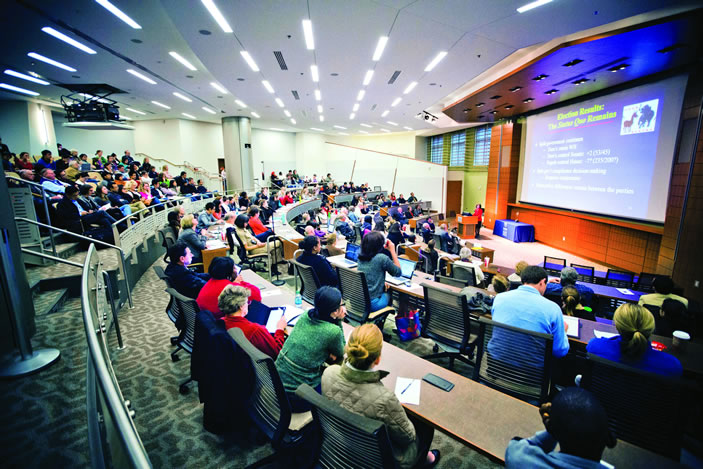 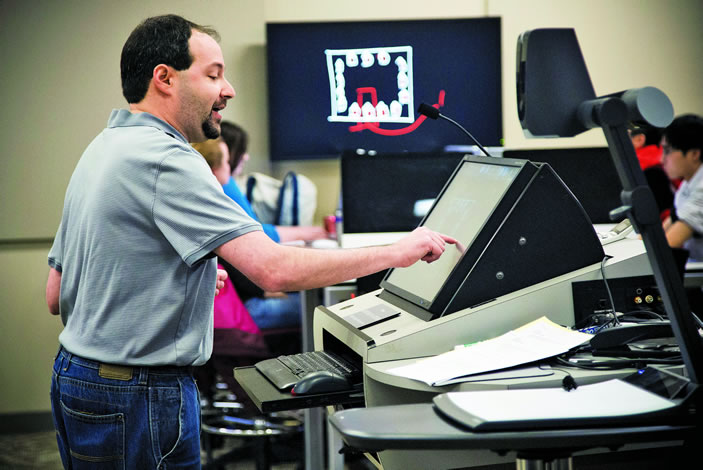 During the renovation of the Grace Crum Rollins Building, this classroom was updated with smart technology to enhance teaching for instructors like Paul Weiss, senior associate of biostatistics and bioinformatics. 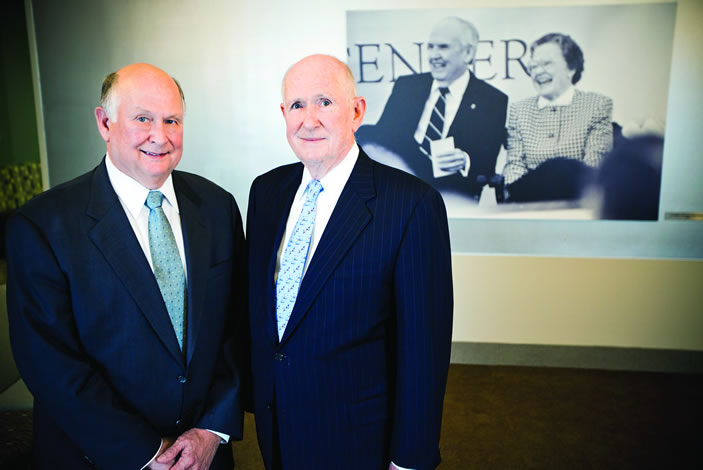 Gary and Randall Rollins standing in front of a portrait of their parents, O. Wayne and Grace Crum Rollins. 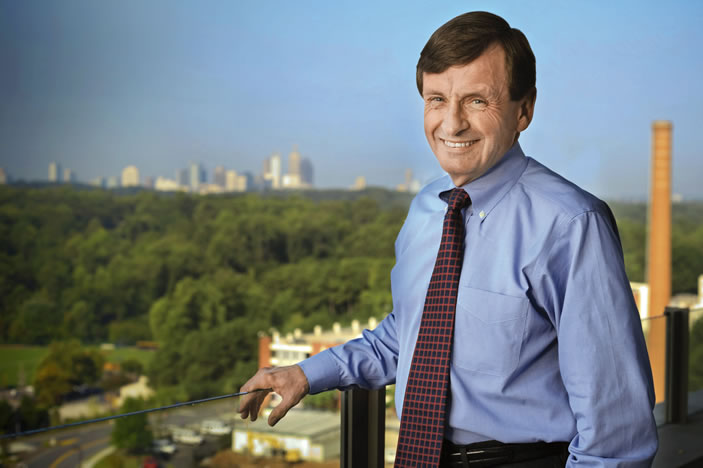 "The Rollins family created the footprint and the facility that allowed us to grow into one of the nation's top schools of public health," says Dean James Curran.

Nineteen Floors, Millions of Stories May 1, 2013

Just over a century ago, O. Wayne ­Rollins was born in a simple two-bedroom house in rural Northwest Georgia.

His mother, Claudia Nance Rollins, impressed upon him and his younger brother, John, that they could achieve anything through honesty, integrity, and hard work. Long after the brothers founded several companies and became Emory benefactors, they continued to heed their mother's advice.

"Giving to a living institution that goes on and affects people's lives—to me that's the best," Wayne once said. "That's the highest kind of giving when you invest in people."

His words ring especially true today, given the commitment of nearly 150,000 alumni, faculty, staff, students, friends, foundations, and others to Campaign Emory. When the seven-year campaign ended in late 2012, they had given a historic $1.69 billion to the university, including a record $170.7 million to the Rollins School of Public Health. The family of Wayne and Grace Crum Rollins played a key role in the RSPH campaign with a $50 million lead gift to construct a second building for teaching and research.

Open since 2010, the Claudia Nance ­Rollins (CNR) Building more than doubles the size of the school and re-emphasizes the Rollins family's commitment to improving public health worldwide.

"The Claudia Nance Rollins Building signifies the importance of public health at Emory and our vision of the future for public health in the United States and throughout the world," says RSPH Dean James Curran. "It is also a tangible example of support for our vision by committed donors and a symbol of shared optimism and belief in our mission."

The CNR Building personifies the commitment of the Rollins family, who share Wayne Rollins' belief in improving the lives of people around the world. Claudia Nance Rollins instilled in him a strong belief in service to others. He came to serve as an Emory trustee and, together with his family, provided major gifts to Candler School of Theology and Emory School of Medicine.

After Emory established the School of Public Health in 1990, Rollins agreed that a building to house it was needed. Following his death in 1991, his wife Grace and their sons Randall and Gary, who also came to serve as Emory trustees, provided a major gift to construct a 10-story building. Prior to the opening of the Grace Crum Rollins Building in late 1994, Emory named the school for the Rollins family to honor their generosity to the university.

Like Rollins himself, the RSPH rose from humble beginnings to be ranked by U.S. News & World Report as the No. 6 school of public health in the nation. Since 1975, the school has evolved from a community health program with 16 students, based in a small house on Clifton Road, into a spacious two-building complex with more than 1,100 MPH and PhD students. Both buildings are linked by a glass bridge.

"The Rollins family created the footprint and the facility that allowed us to grow into one of the nation's top schools of public health," says Curran.