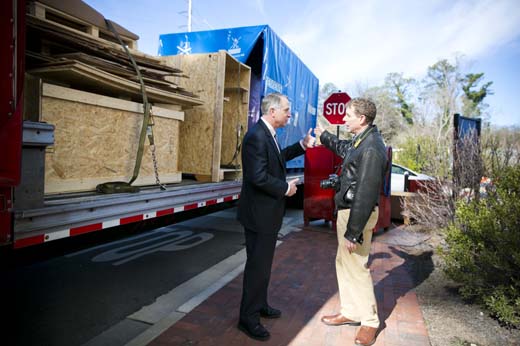 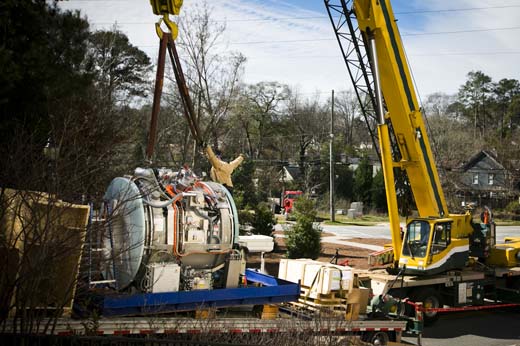 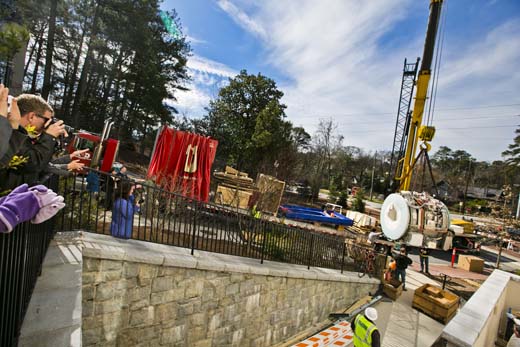 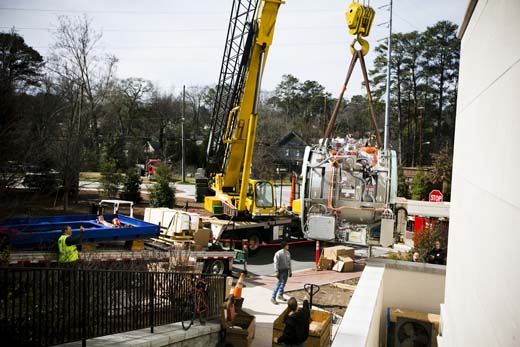 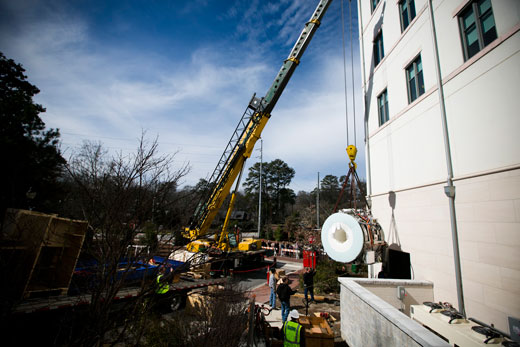 What is your dog thinking? Brain scans unleash canine secrets May 9, 2012

It took two flat-bed trucks and a 40-foot crane to deliver the crown jewel to Emory's Psychological and Interdisciplinary Studies building: A Siemens Trio 3-Tesla functional magnetic resonance imaging (fMRI) machine. The 15-ton instrument arrived in late February, and now resides in a suite of rooms on the ground floor, known as the Facility for Education and Research in Neuroscience (FERN). The new facility is specially geared for using fMRI to explore the neural mechanisms of our thoughts and behaviors, and for training students and faculty in the technology.

"FERN supports Emory's position at the forefront of research into the human mind," says Gregory Berns, a neuroeconomist and director of FERN. "No matter what your field or college major, it's increasingly important to understand the mind and brain, and fMRI is a fundamental tool for doing that."

"The new facility allows us to more widely integrate the study of behavior with the study of the brain," adds Patricia Bauer, senior associate dean of research for Emory College of Arts and Sciences, and a psychologist focused on how children develop and maintain memories. "From anthropology to economics, political science, music and literature, students and faculty from virtually every discipline we have on campus now have the ability to examine the brain in relation to their area of interest."

Acquisition of the fMRI was funded by a $1 million grant from the U.S. Office of Naval Research, as part of the Department of Defense's Human, Social, Cultural, Behavioral Modeling Program.

"The Department of Defense recognizes the growing importance of behavioral science," says Berns, who has investigated the neural mechanisms of how people make decisions related to politics and religion. "Issues of attention, memory, emotion and how people process social and cultural information can all be part of a soldier's mission today."

FERN is a state-of-the-art neuroimaging facility that is also designed to feel welcoming and family-friendly, since children are involved in research on the developing brain. One room contains a mock fMRI scanner, to better prepare participants for experiments.

The scanning technology is non-invasive and harmless, but the fMRI instrument can be intimidating, since it is noisy, and requires the participants to stay motionless in a confined space. "Having a mock scanner is a definite advantage, since it allows us to acclimate participants to the experience, and train them to remain perfectly still," Bauer says.

Emory University Hospital also operates an fMRI facility that researchers outside of medicine frequently tap. FERN, however, aims to greatly broaden the user base of neuroimaging by adding a strong educational component to the technology.

"What makes us unique is our goal of making fMRI as hands-on and user-friendly as possible," says Kate Revill, who recently joined Emory as a research scientist and the manager of FERN. "Most fMRI facilities use hired technicians to operate the scanner. FERN will train students and faculty in neuroimaging technology, so they can be directly involved in every step of the process: From experiment design, to the data collection, to the data analysis."

FERN will eventually allow researchers to use "sweat equity" to offset the cost of time on the scanner, Revill says. For example, after gaining expertise in using the fMRI, a researcher may be asked to train others, or assist in other experiments.

Technicians from Siemens are now charging, tuning and testing the FERN fMRI instrument, a process that may take several weeks. "Even though we may not begin actual scanning with the fMRI until April, we encourage people who are interested to come and talk to us now, because it's not too early to start putting together ideas for experiments," Revill says.

An MRI scan does not involve ionizing radiation. Instead, it uses a large, powerful magnetic field to align the magnetization of protons in the water and fat molecules of the body. "Protons have a property called spin," Berns explains. "When you put them in a strong magnetic field, they start wobbling like a top. We can exploit that property by sending in a pulse of radio waves at exactly the pace they are wobbling."

The radio waves excite the protons, causing them to jump into a higher energy state. When the pulse of radio waves is turned off, the protons relax again and release energy that can be picked up with a radio antennae.

"Depending on which type of molecule a proton is in, it wobbles slightly differently," Berns says. "Based on these slight differences, we can create computer images of the body showing blood flow, cerebral spinal fluid, gray matter of the brain and white matter, or the connections between different areas of the brain."

The technology has revolutionized behavioral and brain research by providing a way to examine the brain in a living person.

"Early MRI research focused on the volume and shape of various brain regions, and revealed dramatic changes in brain structure across the human life span, including adolescence," says Elaine Walker, an Emory psychologist who studies schizophrenia.

The next phase of MRI research, functional MRI, took the technology further by capturing the changes in blood flow in the brain. "This approach allows researchers to identify the areas of the brain that are most active, for example, when people are thinking about emotions versus solving complex math problems," Walker says.

FERN opens at Emory as fMRI research has entered a new era. "The most exciting new developments involve techniques for identifying the interconnections that are the basis of neural networks or circuits, what is being called the 'connectome,'" Walker says. "These interconnections are especially complex in humans, and are responsible for the very sophisticated functioning of the human brain."

Work at Emory and elsewhere to unravel neural mysteries "will hasten progress in our understanding of both normal brain function and the causes of brain disorders," Walker says.