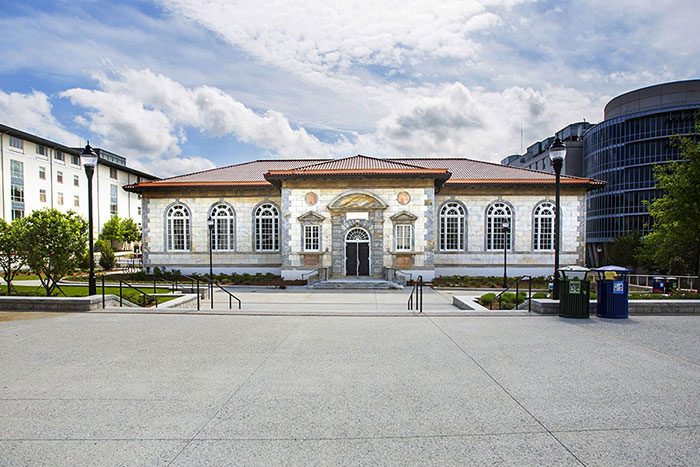 Student identity spaces on the Atlanta campus are currently housed in the AMUC. 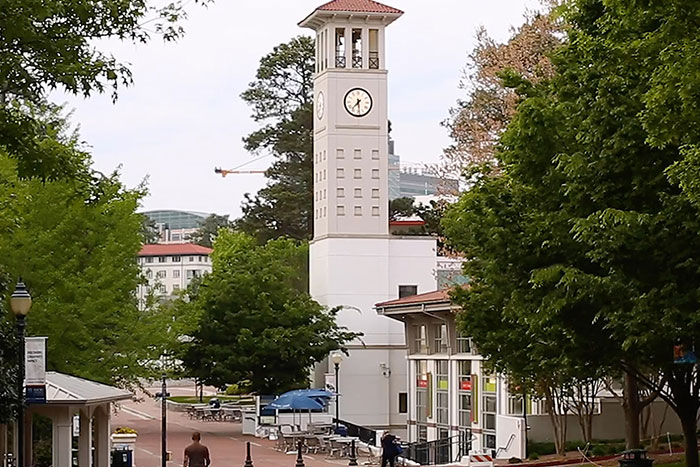 Improvements to student identity spaces in the Alumni Memorial University Center on Emory’s Atlanta campus are underway, driven by student input. By fall 2023, these spaces will relocate to new, extensively renovated locations in Cox Hall.

Renovations to student identity spaces in the Alumni Memorial University Center (AMUC) on Emory’s Atlanta campus are underway, with bigger plans in the works over the next two years. The renovations are part of a series of racial and social justice initiatives announced by Emory President Gregory L. Fenves in August.

“Affinity groups, and the spaces provided for them, empower students to deeply engage, collaborate and thrive throughout their academic experience at Emory,” Fenves said at the time, pledging that the university will “make substantial improvements to these centers for student experience at Emory.”

Currently, projects being termed a “refresh” include improvements to the existing identity spaces on the first floor of AMUC. The Emory Black Student Union (EBSU), Centro Latinx, Center for Women and LGBT Life will be updated with new paint, furniture, carpet and décor.

The refreshment also will include the creation of a new identity space for Asian Pacific Islander Desi/American (AIPD/A) students. This space will be in the current Centro Latinx location, with Centro Latinx relocating across the hall in the old Kaplan Test Prep space.

“The Emory Identity Spaces Project supports students by providing a place to go for community, resources and programs that are meaningful to the populations they serve,” says Enku Gelaye, vice president and dean of Campus Life. “These spaces are critical to informing the campus experience for students and play a significant role in helping them to establish a sense of belonging.”

All area updates and the new APID/A space will be completed by the beginning of the fall 2021 semester. These spaces provide areas where students can gather for meetings, events, weekly discussion groups and workshops — or simply hang out. Some also include resources such as libraries, mentoring programs or accountability groups for interested students.

“These spaces can provide the environment to discuss topics and issues pertaining to your specific identities,” says Crescent Alcid, a first-year student in Rollins School of Public Health. “Visibility can be so important for people and there’s comfort in being within a space where people may look like you.”

But improvements to identity spaces won’t end with the refreshments underway. The third floor of Cox Hall also will be renovated to accommodate all five identity spaces. This multi-million dollar renovation, planned for completion by fall 2023, will further improve the look, functionality and visibility of each group’s space.

“Emory’s planning, design and construction division has assembled an outstanding architecture team to lead the campus investments for new student identity and engagement spaces,” says Robin A. Morey, vice president and chief planning officer of the university. “Representatives from affinity student groups engaged in the design process to select finishes and furniture.”

One of those students was Leslie Salas-Hernandez, a doctoral candidate in public health. She participated in virtual meetings with the architectural firm on behalf of the Centro Latinx Advisory Board.

“The Centro Latinx honors and celebrates the rich and cultural differences the Latinx diaspora experiences,” Salas-Hernandez says. “When I was an undergraduate student at UC Berkeley, I felt incredibly isolated on campus until I found our campus’ version of Centro Latinx. Our center felt like home, the people felt like home. Having a space that nurtures a student’s full self is essential.” Although Salas-Hernandez has been studying at home in California since the pandemic began, she was glad to be involved with the planning process and looks forward to visiting the new spaces once she can return to Atlanta.

Input from Salas-Hernandez, Alcid and others goes a long way toward creating welcoming, unique and functional spaces designed with these students in mind.

“Undergraduate, graduate and professional students have participated in the project,” says Dona Yarbrough, assistant vice president of Campus Life. “They range from those who have been engaged with the spaces for years to first-year students who only know about the groups through virtual programs. Students were asked to submit photos evoking the look and feel they would like to see in the space, to react positively or negatively to images of different spaces, and to provide feedback on color palettes, furniture, art and graphics.”

Rosseirys (Ro) De La Rosa, a junior living on the Clairmont campus, is involved with both Centro Latinx and the Emory Black Student Union. “We were invited to meetings where we spoke about the vision we had for the respective space,” she says. “They gave us options and we were able to choose the vibe we wanted for the space. I’m grateful for the opportunity to help. Centro and the EBSU have both played a huge role in my time at Emory so far. I know how important all the spaces are for their respective groups and I can hardly wait to see the finished project.”

Separate student engagement sessions asking for input regarding the Cox Hall renovation will be held this spring.