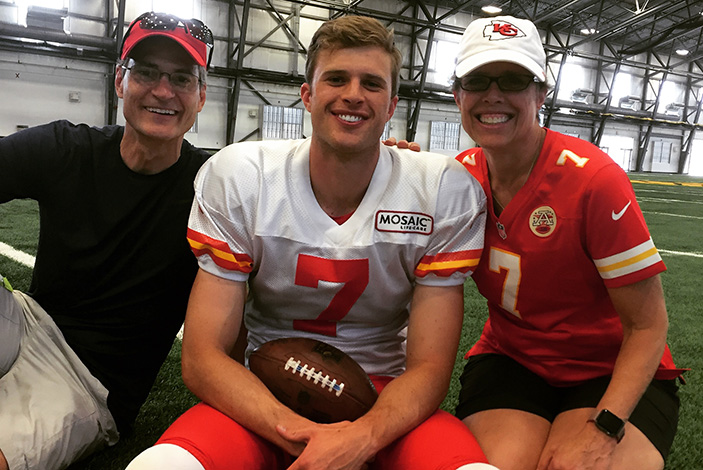 Chiefs' Harrison Butker with his parents Harrison and Elizabeth Butker. 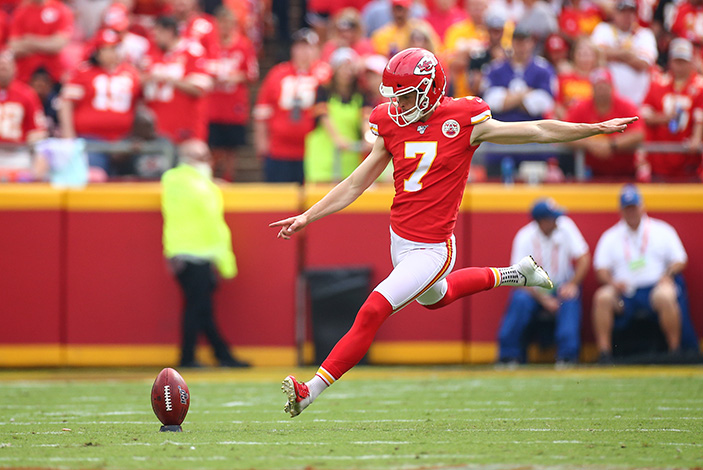 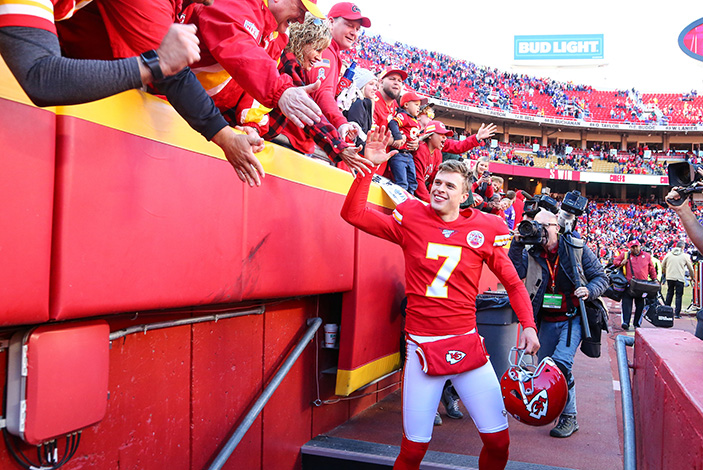 Harrison Butker, a record-setting field goal kicker for the Kansas City Chiefs, has strong family ties to Winship Cancer Institute and will play in Super Bowl LIV on February 2 in Miami.

Winship Cancer Institute teams up with the Atlanta Falcons Oct. 8, 2019

Winship medical physicist Elizabeth Keller Butker, MS, DABR has a special reason to watch the Super Bowl this year. Her son, Harrison Butker, a record-setting field goal kicker for the Kansas City Chiefs, will go head-to-head with the San Francisco 49ers in the sports event of the year, Super Bowl LIV, on February 2.

Inspired by her father's career, Butker joined Winship in 1988 where she specializes in brachytherapy and Gamma Knife medical physics care.

"What an amazing ride these past three years have been for us watching Harrison play for the Chiefs." says Butker. "We are so proud not only of Harrison's success as a kicker in the NFL but also of the man he has become. Let's GO CHIEFS!"

Winship's ties to the Kansas City Chiefs don't end there. In 2015, Winship oncologists treated the Chiefs' former star safety Eric Berry for Hodgkin lymphoma. Berry, an Atlanta native, has remained an active supporter of Winship, meeting with his healthcare team during return trips and taking the time to visit with other cancer patients. In 2018, he was named one of The Winship 80 for his determination to stay in player-ready shape throughout treatment.

As a longtime supporter of our hometown NFL team, Winship partnered with the Atlanta Falcons in October 2019 for the NFL's Crucial Catch initiative to support early detection of multiple cancers through education. Winship cancer survivors were invited to attend a game where they were recognized for their fight against the deadly disease. The Atlanta Falcon's pledged an annual donation of $200,000 to support research at Winship.

"Football and cancer care are both team sports that require the collective involvement of a community for success," says Winship Executive Director and Lawrence W. Davis Chair in Radiation Oncology, Walter J. Curran, Jr., MD. "We are proud to have the support of sports professionals and their families as we continue to tackle cancer in Georgia and beyond."