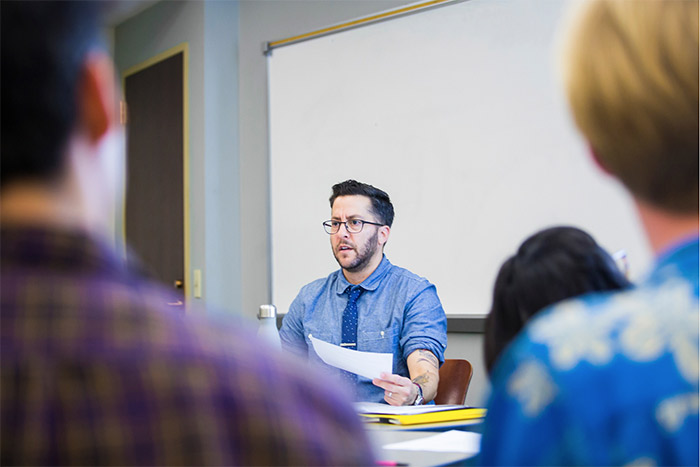 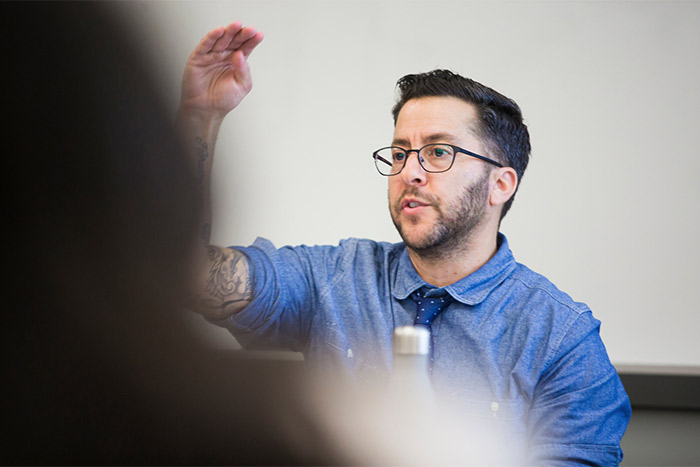 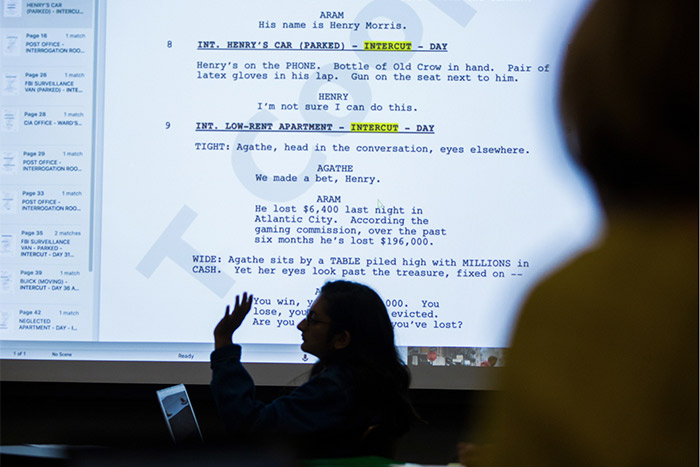 With experience honed as a writer for NBC’s ‘The Blacklist’ and shows on Netflix and BBC America, creative writing professor T Cooper guides students in the highly collaborative craft of writing TV scripts.

Looking for evidence of the surge in quality television? You can find it weekly this fall in a windowless room in Emory’s Candler Hall.

There, T Cooper arranges seats in a circle meant to mimic a writers’ room as he leads “Intro to TV Writing” with lectures, guest speakers and examples of his experience as a writer and consulting producer on the current season of the NBC drama, “The Blacklist.” TV shows like the complicated crime thriller have ballooned in prestige during recent years, drawing critical acclaim and would-be writers who once would have focused on screenplays.

The 14 Emory College of Arts and Sciences undergraduates whose submissions earned them a spot in the popular TV writing course are quick with questions and ideas. They want to capitalize on the chance to study a writing style that draws on their fiction abilities while demanding collaboration and humility, skills that will serve them well whatever their future careers.

And by semester’s end, they will have turned the latest offering from Emory’s nationally recognized Creative Writing Program into a speculative script — “spec” in industry lingo — that could get them in a professional writers’ room after graduation.

“Everyone seems to have a TV show in them now,” says Cooper, who joined the Emory faculty last year as an assistant professor of English and creative writing. “There is incredible freedom in writing for TV, once you learn the structure. It’s a craft first, then an art.”

Learning to work with others

It is an art getting renewed attention, as cable channels and streaming platforms join traditional broadcast television in competing for audiences eager for original stories.

Unlike film, where the director is often the auteur, television gives the power to the writer to create and shape those stories and worlds.

Cooper has embraced a focus on character-driven storytelling in nine books and an award-winning documentary, “Man Made” (forthcoming Nov. 12 from Journeyman Pictures). Showtime bought his first foray into TV writing in 2009 — a show he created with his wife and writing partner Allison Glock-Cooper based loosely on their life — but never produced it.

He went on to write for “The Get Down” on Netflix and “Copper” on BBC America. The latter show is where he met Kyle Bradstreet, the executive producer of the critically acclaimed drama “Mr. Robot.”

Bradstreet, visiting Cooper’s course just days before the series began its final season, walked the students through the 18-plus revisions of one of his show scripts and dissected select scenes from the episode. In answering questions, he explained the importance of patience and observation in the field.

“If you want to make a living as a TV writer, you have to be ready when the opportunity arises,” Bradstreet says. “That may mean putting in time as a writing assistant, maybe just getting lunch, so you can  learn how what you want to write can or can’t be produced. A film set is 200 people, working together to make your scenes come together.”

Long before learning how to collaborate with the props department or audio engineer, and even before successfully working with other writers to complete scripts, TV writers must be able to develop characters and scenes that have sprung from a head writer or creator, who has a specific vision for overall narrative.

Cooper teaches that skill with hands-on projects. First, students team up on a “spec” for an existing or recently ended show, creating an original episode to practice writing for an established premise, structure and characters.

Feedback in the course, from Cooper and other students, can be at turns blunt and encouraging. The experience will help students fashion their final project, their own “spec” of either a half-hour comedy or hour-long drama they will need as a writing sample for an entry-level job.

“We are so happy to have T Cooper, as he is such a talented writer capable of expanding our already robust selection of courses,” says Jericho Brown, the Winship Distinguished Research Professor in Creative Writing and director of the creative writing program. “This new TV writing class shows that we are serving student writers in every way possible.”

Support from faculty and alumni

Samah Meghjee, a senior with a double major in creative writing and film and media studies, figures she has two advantages to help her get into a writers’ room.

She’s a twin who, more than being accustomed to collaboration, prefers it. She also wrote a five-minute short, “Therapist Speed Dating,” that will stream on Amazon Prime this year after winning a screenplay-writing award.

That doesn’t mean her group’s “spec” — for the carefully constructed “Jane the Virgin” — has been easy.

“We are really challenged to come up with a script that works in such a tight story, but it’s great to have such a big problem to solve,” Meghjee says. “A spec script is useful because we will encounter even more of those kinds of problems if we are fortunate enough to land a job in the industry.”

The boom in storytelling has created more opportunities for that luck, including for others from the Emory community. An Oxford continuee, Meghjee connected with Farhan Arshad 06Ox 08C, after asking Oxford’s alumni office for help in finding a TV writer to discuss post-graduate plans.

Arshad completed the two-year Masters of Fine Arts program at Northwestern University after graduating from Emory. He interned with the Comedy Central Summer School before becoming a writer on “Man with a Plan.”

He’s now a contracted writer with CBS, busy this fall with pitches, but his advice has Meghjee considering an MFA after graduation.

Another Emory alumnus, Angad Batra 19C, was hired as a production assistant on “Madame Secretary” this year, based in part on Cooper’s recommendation. The work gives inside, deep access to the storylines and characters – the knowledge needed for the first writing job.

“I try to emphasize to my students that the script ultimately belongs to the writers’ room, not to the individual writer. And that if you can understand and practice the art of collaboration, put in the work around learning structure, and be patient — plus a little lucky — you’ll be the ones writing episodes soon enough,” says Cooper, noting that several of the writers on “The Blacklist” started as assistants.

Patience can be a difficult lesson, especially for students like Jake Perl who fell in love with writing in high school and completed short films and plays before arriving at Emory.

Now a junior with a double major in creative writing and film studies, Perl has worked on his feature-length screenplay for two years. He is near completion of the second draft of the film but, after taking Cooper’s class and becoming more social on campus, has begun to wonder if TV writing is a better fit.

“To be a writer, I thought I’d need to do it all on my own,” Perl says. “Now I have this accomplished writer on ‘The Blacklist’ helping me see that it’s a gift to listen to people who process stories differently. Even more than ending the semester with one spec, I will have lived knowledge that collaboration makes everyone better.”