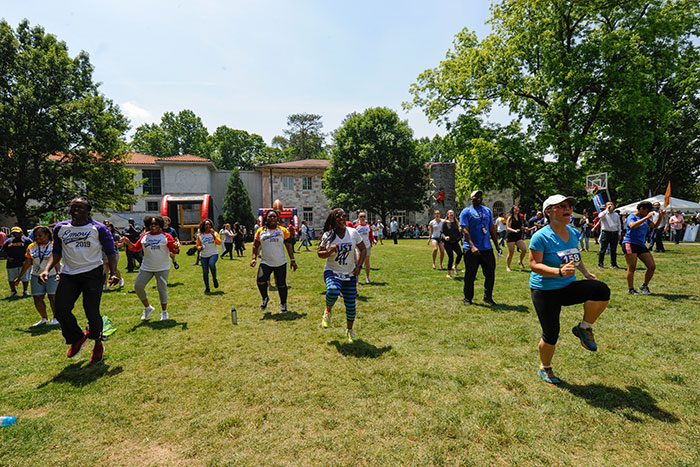 Emory employees turned out in droves Friday for Staff Fest 2019, gathering on the Quadrangle to celebrate the work of staff members from across the enterprise. 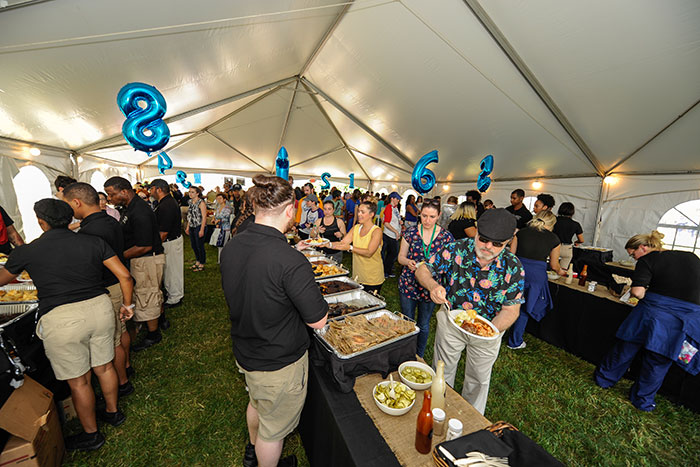 Emory staff members were treated to a barbecue luncheon for 4,500 catered by Jim N’ Nicks. 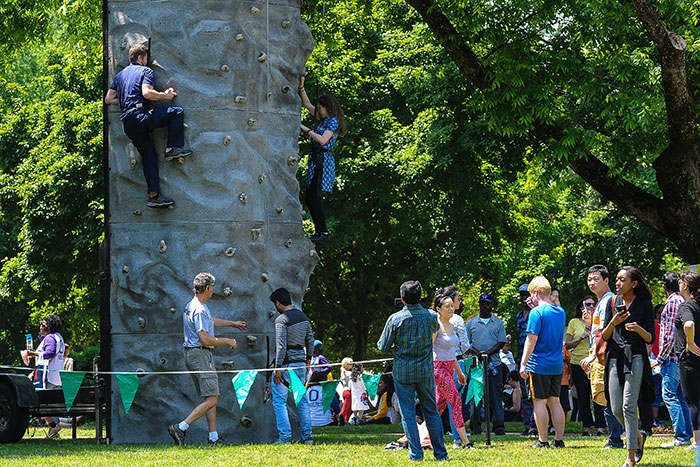 After lunch, some staff members took on the challenge of an outdoor rock wall in addition to other activities such as shooting hoops, playing cornhole, line dancing and throwing footballs. 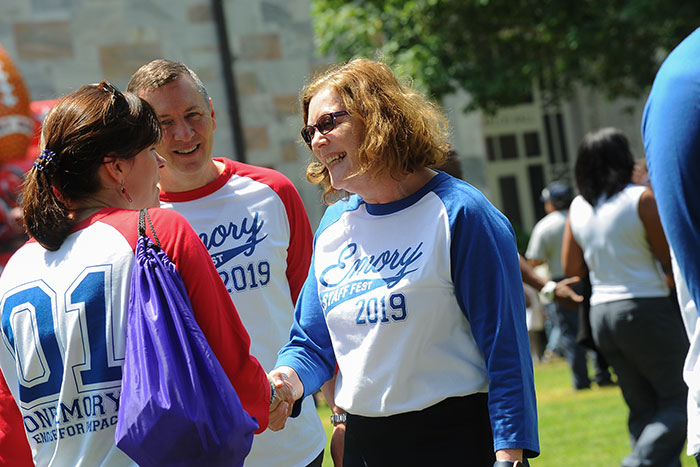 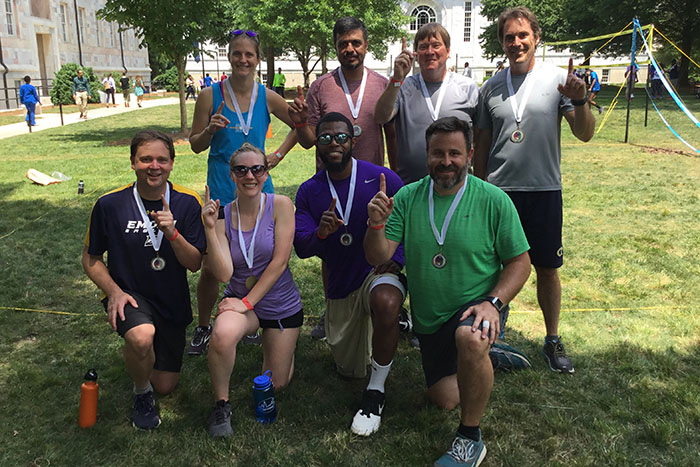 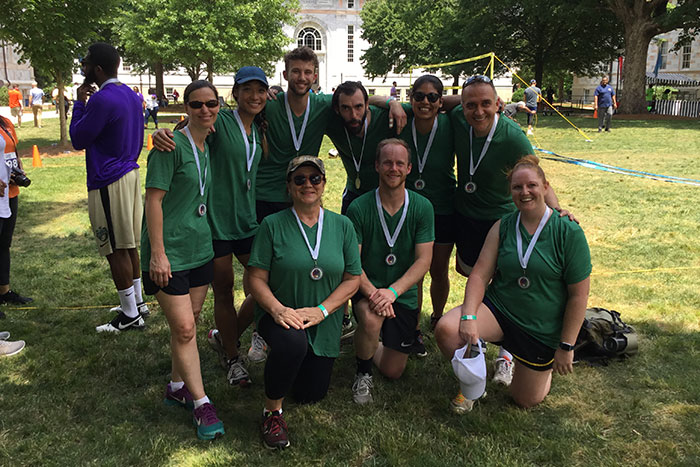 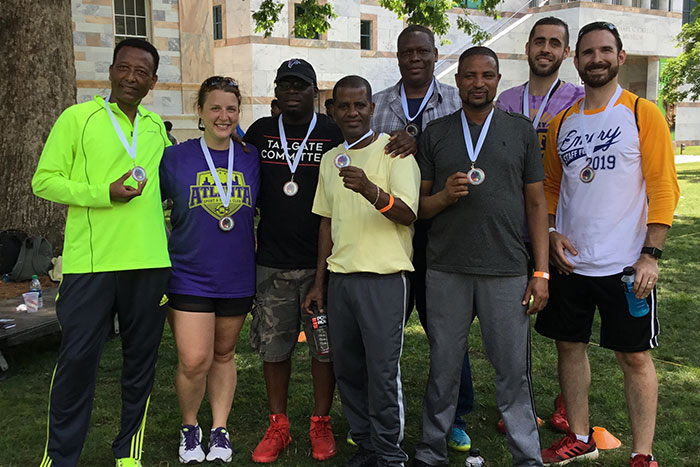 United by the theme of “One Emory — Engaged for Impact,” Emory employees turned out in droves Friday for Staff Fest 2019, gathering on the Quadrangle to celebrate the work of staff members from across the enterprise.

A time-honored tradition, Staff Fest is typically held each year on the Friday following Commencement — an opportunity to gather university employees and retirees for an afternoon of food and fun to mark the end of the academic year.

The event also offers a chance to connect with seldom seen co-workers representing departments and divisions throughout Emory’s campuses, as revelers in business suits mingle with health care workers in lab coats and scrubs, office administrators lunch alongside campus services employees, and laboratory researchers compete against program administrators on the volleyball court.

Sitting at a picnic table shaded by a tent, Rosa White, a medical secretary in the Emory School of Medicine’s Department of Pediatrics, pointed to half-a-dozen co-workers who joined her for the annual festival. “We come every year, wouldn’t miss it,” she said. “The food gets better every time.”

Waiting to have an artist draw her in caricature, Linda Robertson, who works in Emory’s Library, Information and Technology Services (LITS), said she enjoys the sense of unity the event provides. “It just feels great bringing everyone together,” she says. “And I like the focus on athletics this year.”

Sizing up her goal, Alicia Allen took a shot at being a kicker, sending a football soaring. “I should have made it, after all. I’ve played kickball,” laughed Allen, who works at Emory’s Grady Memorial Hospital campus and hasn’t missed a Staff Fest for 11 years.

With an atmosphere that felt like a mash-up of a small-town festival, a family reunion and a down-home picnic, groups of employees connected with friends old and new. In an over-sized game of Connect Four, Felicia Mobley, who works in the Radiology Department at the Emory School of Medicine, found herself meeting — and facing off with — Star Lucas, an Emory Dining employee.

Before that moment, they had never met. But when Mobley invited her to a match-up, in the spirit of the day, Lucas didn’t hesitate. Dropping game discs the size of hamburgers into a frame that easily stood four-feet tall, Mobley confided the secret to her skills. “I play this with my kids all the time,” she laughed.

It was an afternoon of fierce-but-friendly rivalries, as teams with names such as The Volley Lamas, May The Spike Be With You and The Chimpions battled for the top title at the volleyball net.

Cheering on the DAR (Division of Animal Resources) Sentinels, Rebeccah Wood explained what unites her team. “We’re all just interested amateurs,” says Wood, an animal resources training coordinator. “It’s our fourth year doing this and we just love it. It’s all good fun — except when you lose.”

As it turned out, her team would be bested by the Bio-Blockers, representing the Biology Department in the Emory College of Arts and Sciences. “We’ve been practicing a little,” acknowledged Sonia Perez Hayden, an assistant program director and team captain. “We won third place a couple of years ago — hopefully, we’ll go all the way.”

“We just have people who love to play and enjoy being together,” she said.

The volleyball tournament, a favorite at Staff Fest, drew 16 registered teams to the Quad this year for competition.

The winning teams are as follows:

The Fun Run/Walk took place before the main Staff Fest event. It began at 10:30 a.m., taking a two-mile route from Asbury Circle to the Quad.

Here are the winners, divided into age categories: