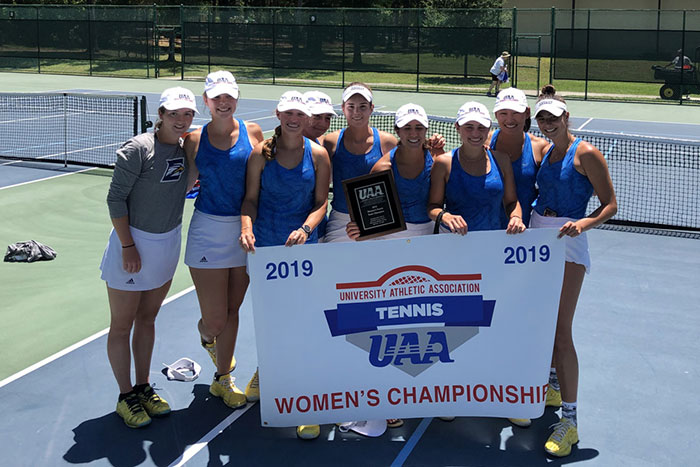 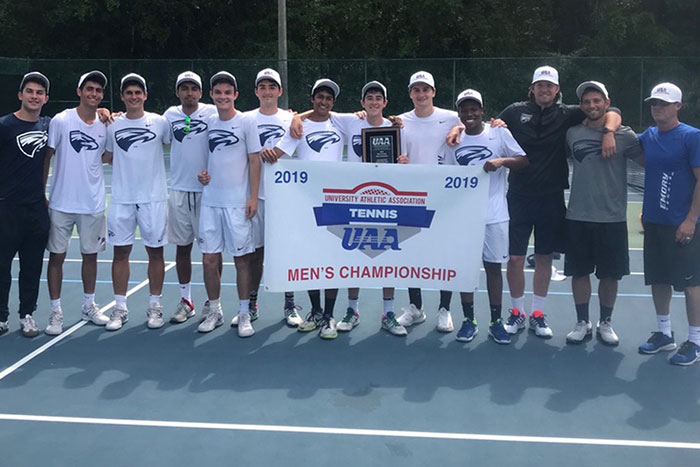 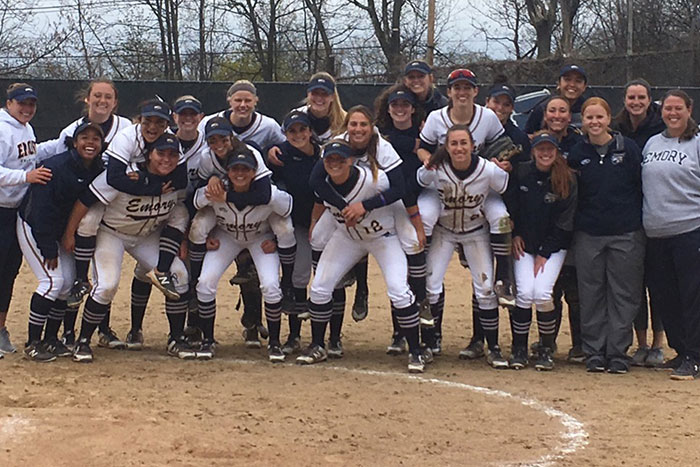 All three teams now look toward May 6, when matchups for the NCAA Division III postseason will be announced.

Senior Daniela Lopez and first-year student Jessica Fatemi began the match on a strong note for the Eagles, taking the second doubles point with an 8-3 decision. Chicago evened the score with an 8-6 win over sophomore Stephanie Taylor and first-year student Christina Watson on court three, but sophomores Ysabel Gonzalez-Rico and Defne Olcay were able to send Emory into doubles with a 2-1 advantage following the 8-6 victory at first doubles.

Chicago earned a 6-0, 6-1 win over first-year student Emma Cartledge at fourth singles to open singles play before Gonzalez-Rico (6-1, 6-2) and Lopez (6-2, 6-0) put the Eagles in front with wins on courts one and two.

Chicago did not go quietly, battling back to win on court four against first-year student Lauren Yoon (6-2, 4-6, 3-2, retired) as well as on court five against Olcay (4-6, 6-2, 6-3) to set up a winner-take-all featuring Fatemi and Eugenia Lee on court four.

Fatemi dropped the first set 7-6 before storming back to claim the second and third sets 6-2, 6-4 to clinch the match for the Eagles.

Emory now heads into the NCAA Tournament with a 17-3 overall record and will find out its first round opponent when draws are released on Monday, May 6.

After a year's hiatus, the Emory men's tennis team is bringing the University Athletic Association Championship back to Atlanta following a Sunday win over Brandeis in the title match. The No. 3-ranked Eagles won for the 13th straight time and upped their overall record to 17-2 after recording a 5-1 verdict over the No. 10 Judges who fell to 16-4.

Sophomore Hayden Cassone and first-year student Antonio Mora got Emory off on the right foot at third doubles with their 8-2 decision over Colt Tegtmeier and Tyler Ng accounting for the first point of the match while raising their season record to 15-4.

BU tied the contest at No. 2 doubles with what proved to be its lone point of the match at No. 2 doubles, but the Eagles went ahead for good following the senior tandem of Jonathan Jemison and Adrien Bouchet winning at No. 1, 8-3, against David Aizenberg and Anupreeth Coramutla.  The win was the 10th straight for Jemison and Bouchet and boosted their season ledger to 24-4.

All three of the Emory singles wins came in straight sets. Cassone extended the Eagles to a 3-1 edge after coming away with a 6-3, 6-2 triumph at No. 2 that raised his season record to 14-7.  Bouchet put the Emory team one point from clinching when he won for the 20th time in 23 outings during the year with a 6-1, 6-3 verdict over Adam Tzeng at third.  At No. 5, first-year student Andrew Esses closed things out, 6-2, 6-2, vs. Rajan Vohra that represented his 20th win of the campaign.

Today's title was Emory's fourth in the last five seasons and the program's 27th overall. On May 6, the Eagles will learn their opponent and game location in the opening rounds of the NCAA D-III Championships.

Needing a split to secure the University Athletic Association title, the Emory softball accomplished that and more with a Sunday sweep of a doubleheader against Brandeis.

The Eagles brought home the program's 12th-ever crown, topping Brandeis 3-2 in the opener before posting a five-inning, 11-3 triumph in the finale. Emory now stands 30-10 in overall action and finished UAA action with a 16-4 effort.

In the first contest, Emory got on the board in the first when junior Sami Feller kept up her torrid hitting pace with a two-out single that scored Sarah Katz who had doubled earlier. After evening the contest in the third, Brandeis snapped the tie in the bottom of the fifth when Marley Felder socked a solo homer.

But the Eagles responded with a pair of scores in the top of the sixth. Katz opened with her second safety of the contest and then moved to second after Feller singled through the right side.  After a walk to Cassie Baca loaded the bases, freshman Mattie Ryan came through with a clutch one-out double to right center that pushed Katz and Feller home. That proved to be enough for senior pitcher Toko Miller who notched her ninth win of the year after throwing three innings of relief and allowing one run and one hit.  Miller retired Brandeis in order the last two innings.

With the conference championship securely in its grasp, the Eagles revved up their offensive attack with 11 hits in the last game of the regular season, two apiece by Baca, junior Greta Wilker and Ryan. After Brandeis put up a pair of runs in the first, Wilker smashed a solo homer in the second that cut the Eagles' deficit in half.

Emory took the lead for good with a four-run third inning, highlighted by a two-run single from junior Jessy McLean. Emory scored three more times in the following inning, with Ryan delivering a two-run single that represented her 28th and 29th RBIs of the campaign. In the fifth, the Eagles added three more runs after the first two batters were retired. Baca accounted for the first two runs, tripling to right field and then scoring as a result of a throwing error.  It was Baca's sixth three-bagger of the year, tying for sixth place on the school's seasonal chart. Sophomore Madison Schaefer went the distance in the circle for her 13th win in 17 decisions this season, surrendering six hits and striking out one.

Emory's victory total represents the 15th time in program history that it reached the 30-win plateau.

The Eagles now wait until May 6 to see how the postseason shapes up when the NCAA Selection Show is aired on ncaa.com starting at 1 p.m.