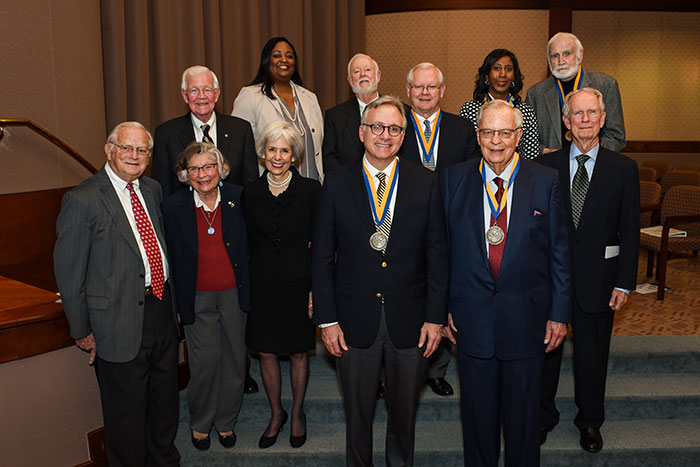 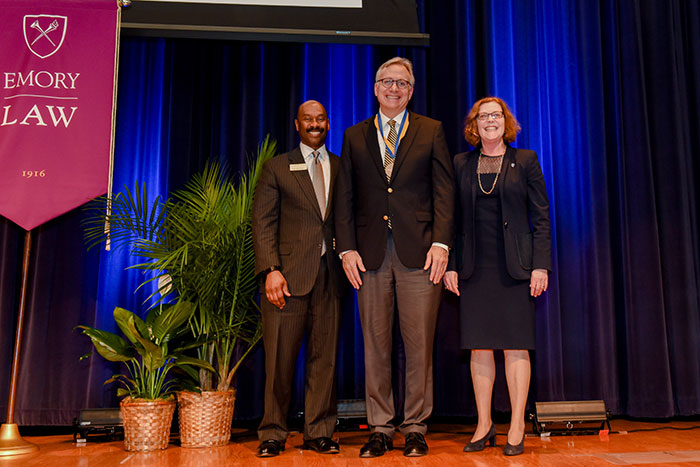 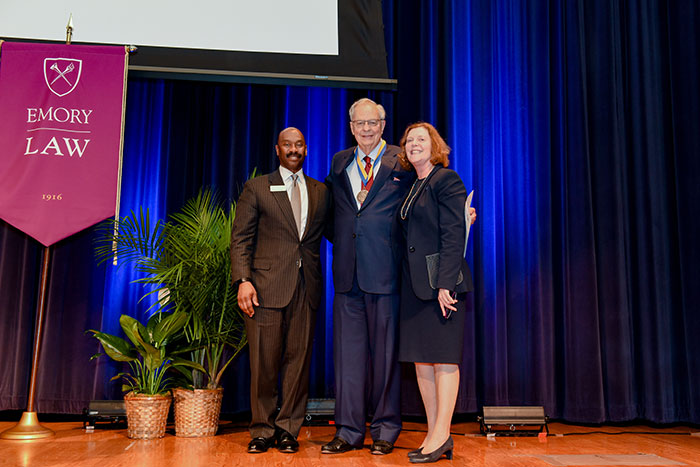 Richard Hubert (center) poses with Hughes and Sterk after being awarded the Emory Medal. 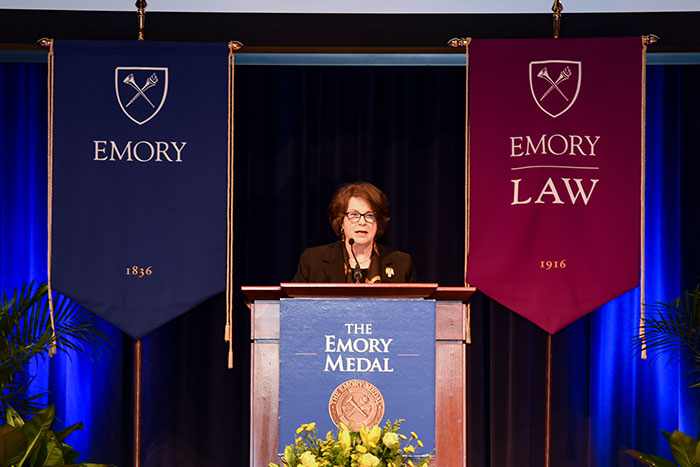 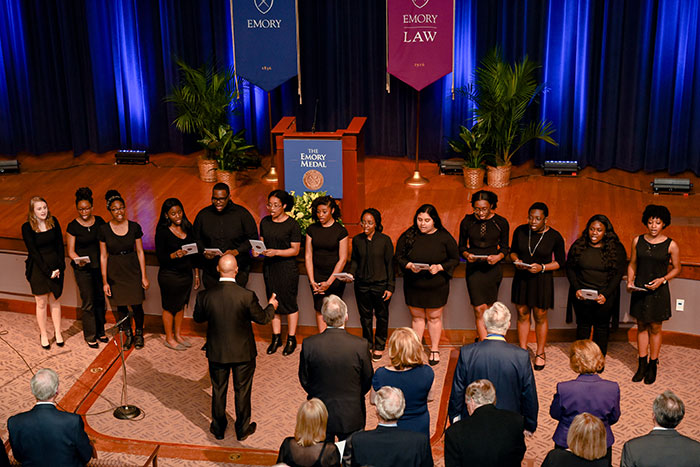 The 2019 recipients of the Emory Medal, the university’s highest alumni honor, have spent their careers working for the global good and have been wonderful stewards and representatives of Emory in the world. Ambassador David Adelman 89L and Richard Hubert 60L were honored by the Office of Alumni Engagement in ceremonies Feb. 28 at The Carter Center.

Adelman served his constituents in the Georgia State Senate before departing for a diplomatic post in Singapore, then settled in New York in private practice. A prominent attorney in Atlanta, Hubert has been fulfilling his parents’ vision to “feed people in distress and to help those who are sick,” through his work as executor and trustee of the Hubert Foundation.

Family is the greatest source of pride for Ambassador David Adelman 89L. “We are a tight knit family, and we cherish our time together,” he says. That family bond was on full display when he along with his wife and three children represented the United States in Southeast Asia while Adelman served as the U.S. Ambassador to Singapore from 2010-2013.

“It was an honor for our whole family,” says Adelman, who has had a wide-ranging career across the public and private sectors in Atlanta, Washington, Singapore, Hong Kong and New York. “I am fortunate to have enjoyed a very diverse career in the years since graduating from Emory. I have worked all over the world and hopefully in a way that has helped others.”

Adelman holds degrees from the University of Georgia, Georgia State University and the Emory School of Law. “At Emory, I was introduced to young people from all over the world,” he says. “My time at Emory really developed my world view and appreciation for the importance of the rule of law and high ethical standards.”

After graduation from Emory Law, Adelman served as an assistant attorney general in Georgia and then practiced with a law firm in Washington and Atlanta.

With Emory, Adelman has served on the Law School Alumni Board, the Board of Visitors, the Law School Council and the Emory Public Interest Committee Advisory Board. He and his wife have hosted alumni and student events in Atlanta, Singapore and New York. He was a trustee of the Grady Health System and served for eight years in the Georgia State Senate where he earned the reputation as a legislator who worked across political party lines.

In 2009, Adelman was nominated to serve as U.S. ambassador and was unanimously confirmed by the U.S. Senate. “My greatest privilege was to represent the United States in an important part of the world," he says. During his four-year tenure, Adelman launched the U.S.-Singapore Strategic Partnership Dialogue and established a Third Country Training Program to address health, educational and environmental issues in the region, earning him the U.S. State Department Superior Honor Award and the U.S. Navy Distinguished Service Medal.

Currently, Adelman serves on several corporate advisory boards and is a partner in an international law firm working in New York, Hong Kong and Singapore on trans-Pacific trade and investment issues. He also is a member of the Council of Foreign Relations and an adjunct professor at New York University, where he teaches international relations.

For more than half a century, Richard Hubert 60L has been a credit to Emory both for his tireless volunteerism and his philanthropic leadership in the field of global health. Over the years, Hubert has contributed mightily to the Atlanta community via his work representing the interests of his neighbors in the Druid Hills area and has earned a spot on Best Lawyers in America lists in Eminent Domain and Condemnation Law practice areas.

Hubert was actively involved in community service, serving as the president of the Druid Hills Civic Association for two terms and as the president of the Lawyers Club of Atlanta. As the former treasurer and now emeritus board member, Hubert is also extremely proud of the work he did with the Global Health Action Committee and the work they do in Africa, China and the Caribbean in the areas of health and hunger.

Of particular note, Hubert practiced law dedicated to community service to the benefit of the economic wellbeing of the law firm. Through the beginnings of a grassroots effort in his neighborhood of Druid Hills, one of the high points in his successful law career was representing the community and its legal efforts to save the Olmsted Parks on Ponce de Leon Avenue.

For Hubert, philanthropy has deep roots, beginning many years ago when he was a young teenager. On one particular day, his father called a family meeting, saying “You’re all going to have more than enough, so we should think about what we should do with the rest.” And after some discussion, it was decided. They would feed the hungry and make the sick well.

And, via the family’s foundation, that is what they have done. With Hubert at the helm as executor and trustee, the Hubert Foundation has been key in Emory’s stake as a leader in global health, establishing the Hubert Department of Global Health at the Rollins School of Public Health, becoming the first named global health department among schools of public health in the United States. The foundation has created endowment funds and fellowships, as well.

“We intended to support the kind of health care we want to deliver to populations that otherwise would simply be without,” says Hubert.

The O.C. Hubert Fellowships in International Health have enabled more than 700 public health students to engage in research and fieldwork throughout the world, participating in such diverse projects as refugee health surveillance in Belgium, assessing disaster preparedness in the U.S. Virgin Islands, and evaluating interventions for domestic partner abuse in Nepal.

The Hubert Foundation’s influence can be felt across departments and is instrumental in Emory’s leadership in the space. The foundation’s efforts in public health do not just stem from the Emory campus. Among other projects, the Hubert Foundation also supports select charities around the world in “an effort to promote a kind of brotherhood of man.” They helped with cancer research and created a goat farm in North Korea, improved prenatal care in China and have projects in the Caribbean. Out of them all, what is Hubert most proud of? “I favor the Goat Project,” says Hubert. “It’s a direct way to help and it sustains itself.”