'Conversations on the Quad' explores innovation at Emory 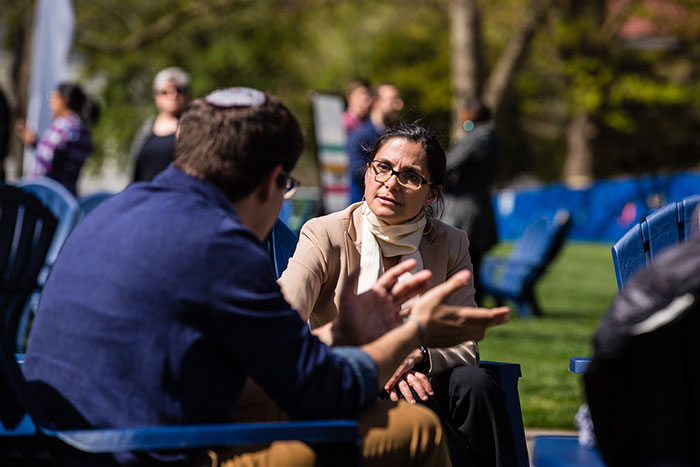 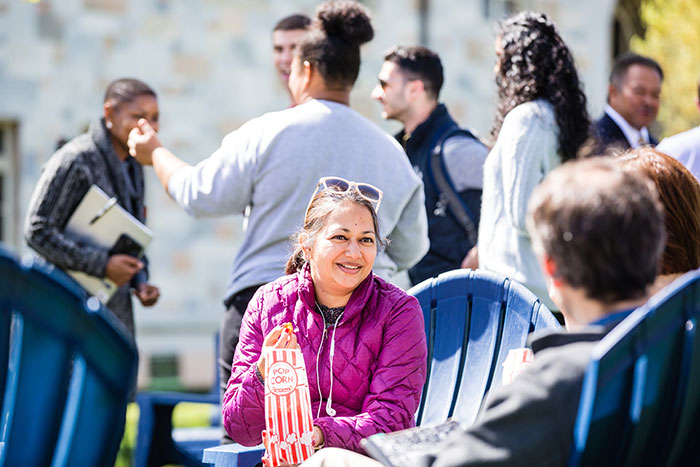 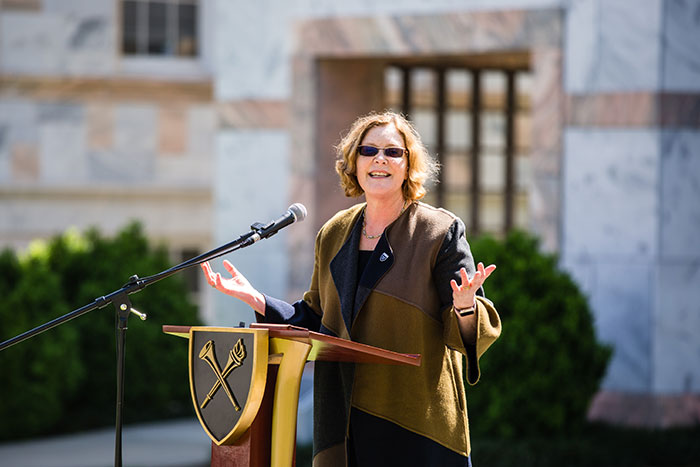 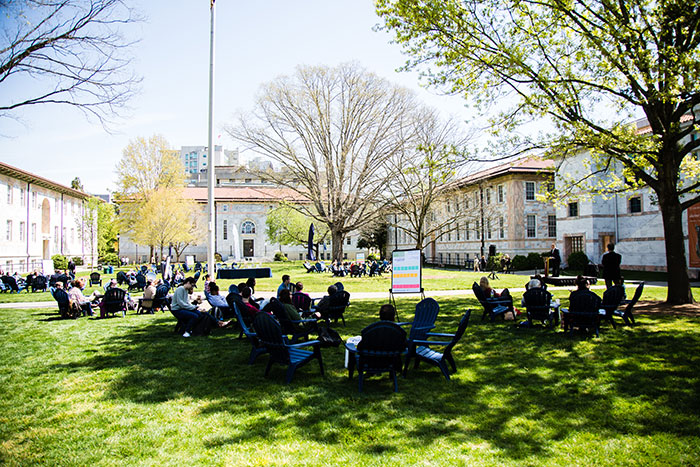 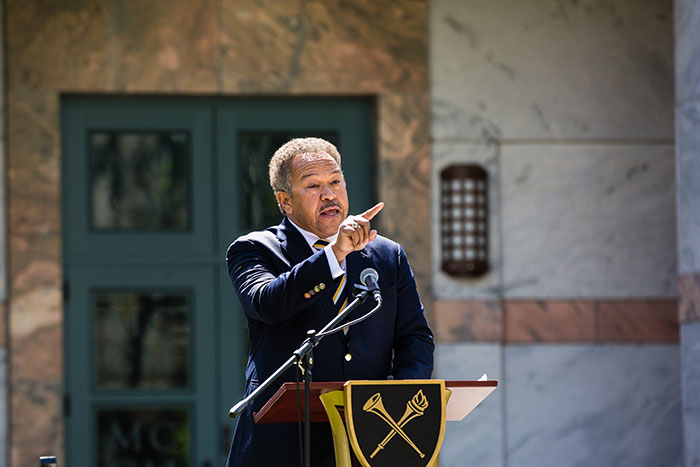 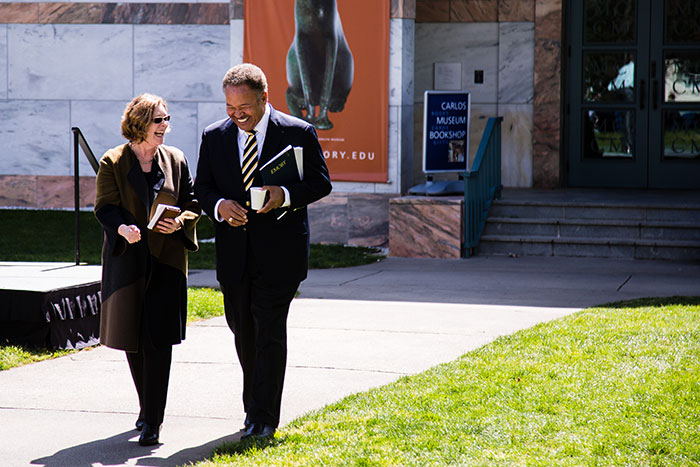 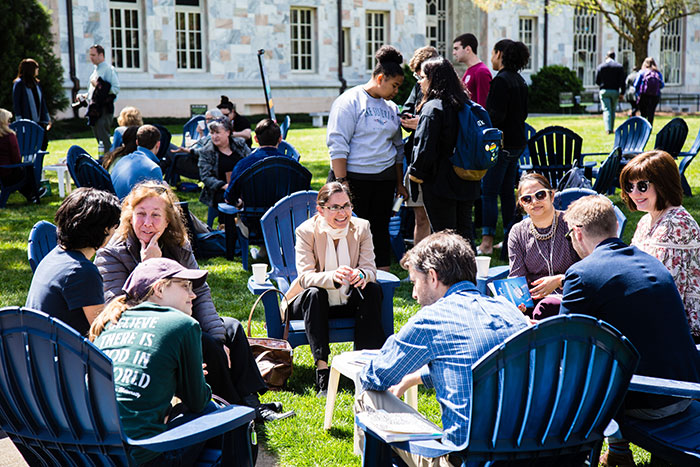 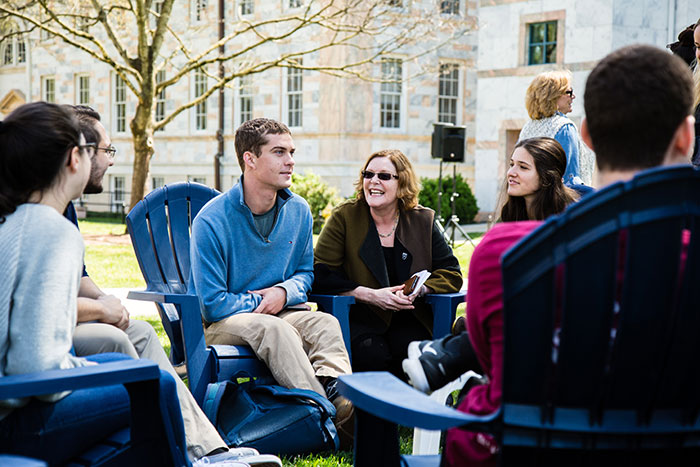 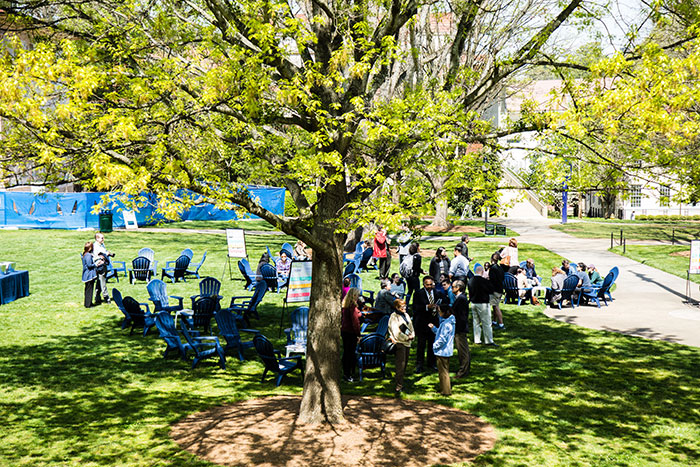 Emory faculty, students and staff gathered April 5 for the inaugural “Conversations on the Quad,” with welcoming remarks from Emory President Claire E. Sterk and a keynote “conversation starter” by Robert M. Franklin, senior adviser to the president and James T. and Berta R. Laney Professor in Moral Leadership. Emory Photo/Video

Is there a spirit at Emory uniquely suited to lead innovation in service to humanity?

That was the question posed at the first “Conversations on the Quad” event held Thursday, April 5, from 10 a.m. to 4 p.m., where the theme was “Building a Culture of Innovation at Emory.” The event was an update on the university’s “Classroom on the Quad” tradition.

The day had pretty much everything in its favor: the beauty and mildness of spring, Emory-blue Adirondack chairs placed in inviting circles around the Quad, and refreshments to fuel the discussions.

With words of inspiration from Emory President Claire E. Sterk and keynote speaker Robert M. Franklin, the answer to that question quickly became an overwhelming “yes.”

Calling the Quad an “amazing piazza,” Sterk pointed to its centrality, “surrounded by the core of where Emory started. All of the work that takes place around the Quad reflects our mission and academic focus.”

Acknowledging that the whole Emory community needs more opportunities to come together, the president characterized the event as “the beginning of a dream, of an understanding of what the Quad can be like and what it stands for.”

Promising that “today, we will educate each other by engaging in conversation, even when it is difficult,” Sterk introduced Franklin, senior adviser to the president and the James T. and Berta R. Laney Professor in Moral Leadership at Candler School of Theology, who announced to the assembled, “Welcome to the garage.”

Franklin reminded listeners that many amazing creative partnerships have thrived in garages — surrounded by old paint cans, rakes and brooms, and those odd-sized pieces of wood that might come in handy one day. In other words, innovators share a glorious ability to transcend the limitations of place and time in order to dream big.

Consider William R. Hewlett and David Packard, who in 1938, in a garage, started what eventually would become the Hewlett-Packard Company. The property is now listed on the National Register of Historic Places and considered the birthplace of Silicon Valley.

The idea of making technology firms ascendant in the West came from a Stanford professor, Frederick Terman, who encouraged his students to start their own electronics companies in the area rather than joining established firms in the East. The first students to follow his advice were Hewlett and Packard, who began developing their initial product, an audio oscillator, in that now-famous garage.

Just 10 minutes away is the childhood home of Apple cofounder Steve Jobs; it too has earned status as a historic site. Says Steve Wozniack, Jobs’ cofounder, “I developed the Apple 1 at Hewlett-Packard when I worked there. We then would drive the finished products to the garage, test them and take them to the store for sales.”

Said Franklin of the duo, “They wanted a regular, open forum for people to get together to make computers more accessible to everyone. They shared generously, and the result was that they changed our world.”

“Smart, cool people” are a fixture at Emory and in the city we call home, Franklin continued, describing how Atlanta has become a global headquarters for human rights and social justice; public health; and arts, film and music. By combining the power of Emory and Atlanta, Franklin envisions creating more inclusive, healthier communities and making progress toward eliminating violence, poverty, racism and despair.

What is needed for this ambitious startup? Taking the time out of our busy days to talk about what matters to us. Franklin quoted the theologian Howard Thurman, who said, “Do not ask what the world needs. Just try to do what makes you come alive. What the world needs is people who have come alive.”

The best antecedent for a social innovation garage was the civil rights movement, noted Franklin, who had just returned from representing Emory at events in Memphis honoring the memory of Martin Luther King Jr. 50 years after his assassination.

King, said Franklin, was invited into a social innovation garage. “I did not say he created one; I said he was invited into one,” Franklin explained. That is because it was “the women who launched the movement: Rosa Parks, Jo Ann Robinson and Coretta Scott King, who studied nonviolence before Martin did.”

Just as in that historic struggle, Franklin assured listeners that if we learn to talk to one another, show respect and share bold ideas, Emory too can lead a revolution of ideas and values.

Societal problems — divides of partisanship, race and class; nuclear proliferation; opioid use; mass incarceration; and gun violence — are profound. However, Emory’s bench is deep, says Franklin, including President Jimmy Carter, Emory University Distinguished Professor; His Holiness the XIV Dalai Lama, Presidential Distinguished Professor; and other leaders who have “deep knowledge and insight into the human condition.”

Franklin urged that we bring these “broken things” and unsolved problems into our ethical leadership garage. There, he said, “with humility, care and effort, we can offer our best ideas and practices. Everyone is welcome in this garage, even those who have never picked up a wrench.”

“Conversations on the Quad” will continue in the fall, and the important thing is to keep the conversation rolling. “There is something in our institutional DNA that says we should dream no small dreams,” Franklin said.