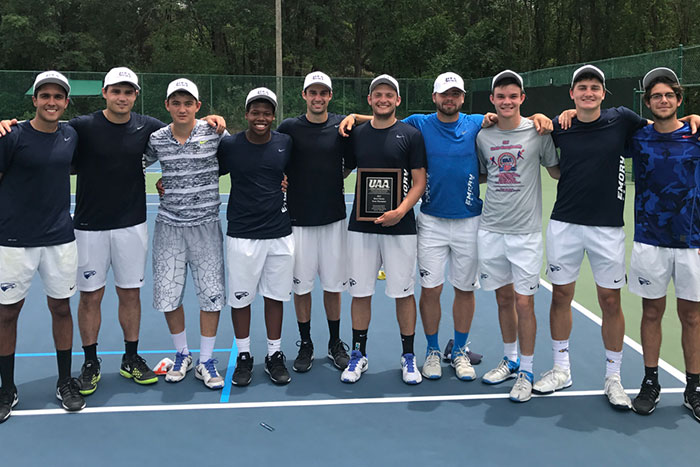 Emory's men's tennis team claimed its third consecutive UAA title by defeating Washington University. This was the 26th time in 30 seasons that Emory has won the men's championship. 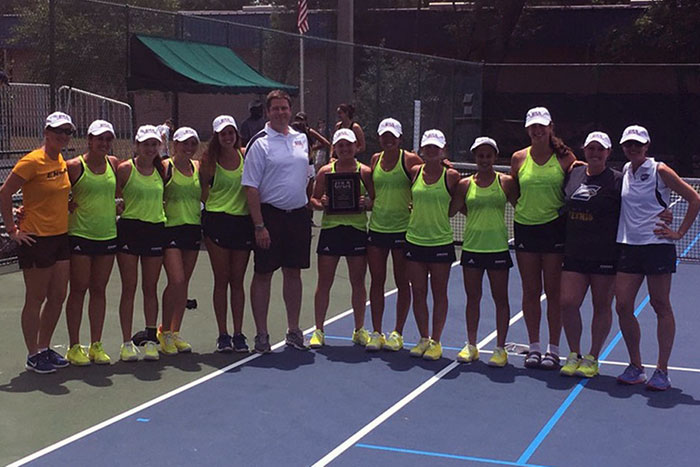 It was the fifth consecutive and the 28th overall UAA title in program history for the women’s tennis team, which defeated 9th-ranked University of Chicago, 5-4, in a thrilling title match.

The men's tennis team claimed its third consecutive UAA title by defeating Washington University in the championship final. This was the 26th time in 30 seasons that Emory has won the men's title.

The Emory women's team faced off against the University of Chicago in the UAA championship. With the deciding match deadlocked at 4-4, junior Bridget Harding rallied from a first set deficit to deal Chicago’s Ariana Iranpour a 3-6, 6-0, 6-3 loss at first singles to claim the championship point for the Eagles.

Emory fell behind the Maroons in the early stages of the match as Chicago stood victorious in two of the three doubles matches. Harding and senior Katarina Su were the lone victors, edging Rachel Kim and Marjorie Antohi 8-4 at first doubles.

Chicago answered with wins at second and sixth singles to set up a winner-take-all match at first singles with Harding coming out on top in three sets.

Emory will close out the regular season next Saturday, April 29, with the final match of the regular season against Georgia Gwinnett College. The match is scheduled to begin at noon and will be held on the WoodPEC Outdoor Courts.

The No. 2-ranked Eagles raised their overall record to 17-4 (3-0 UAA) following an 8-1 triumph over the No. 6 Washington Bears to win the UAA championship.

In singles, Jemison propelled Emory to a 4-0 lead after getting the better of John Carswell, 6-1, 6-4. Bouchet then recorded the fifth and winning point with a 6-4, 6-4 triumph against Bernardo Neves.