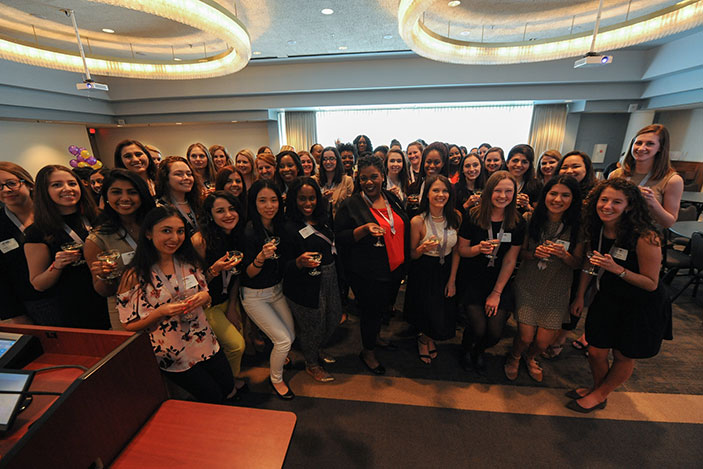 Before the 100 Years of Women of Excellence dinner, a pinning ceremony took place honoring 80 students. 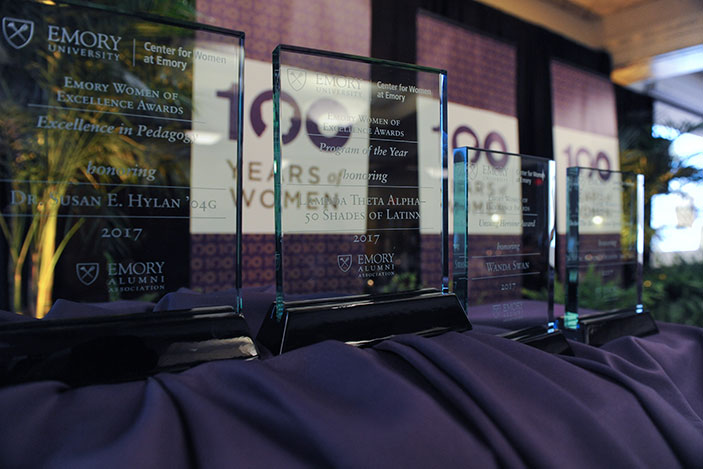 The Women of Excellence event has been a staple of Women’s History Month for the past 20 years — given added impact with this year's centennial of women at Emory. 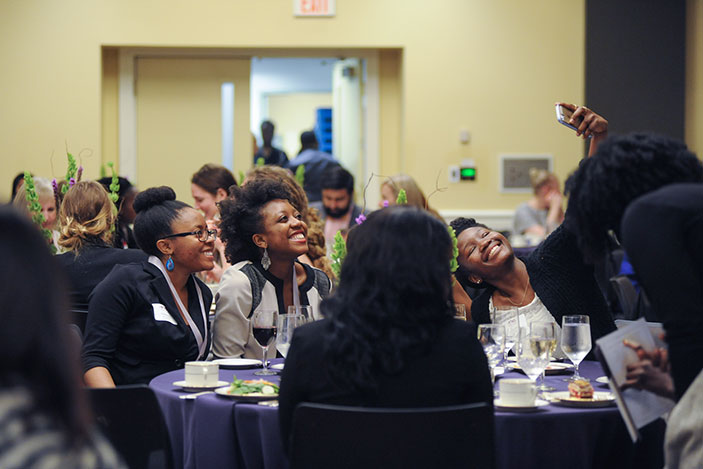 The Cox Hall ballroom was filled to capacity for the March 18 event. 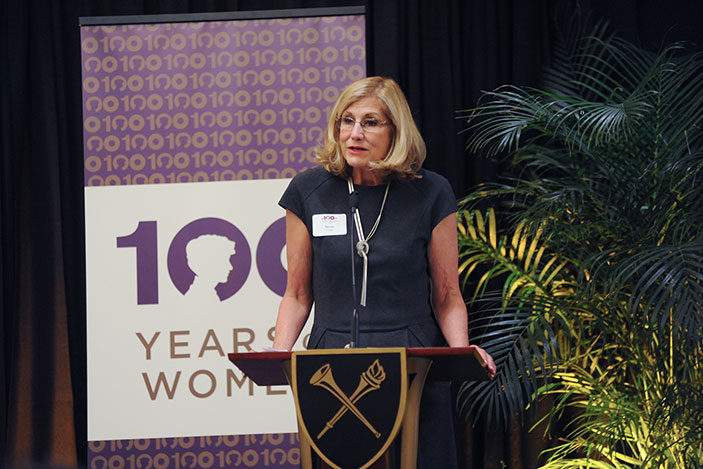 Susan Cruse, senior vice president for Development and Alumni Relations, served as emcee for the evening. 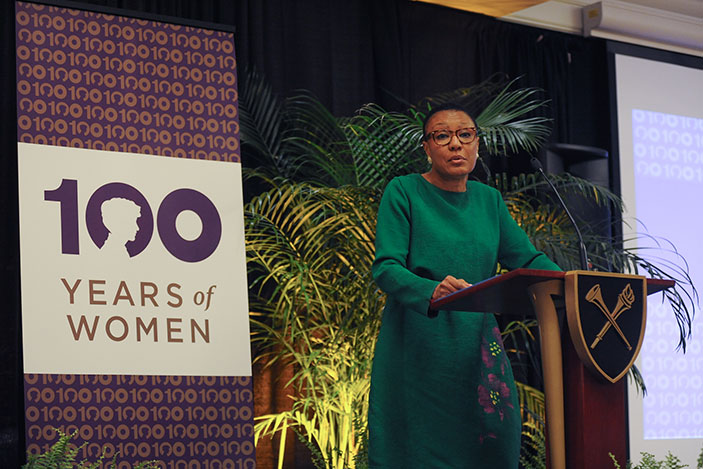 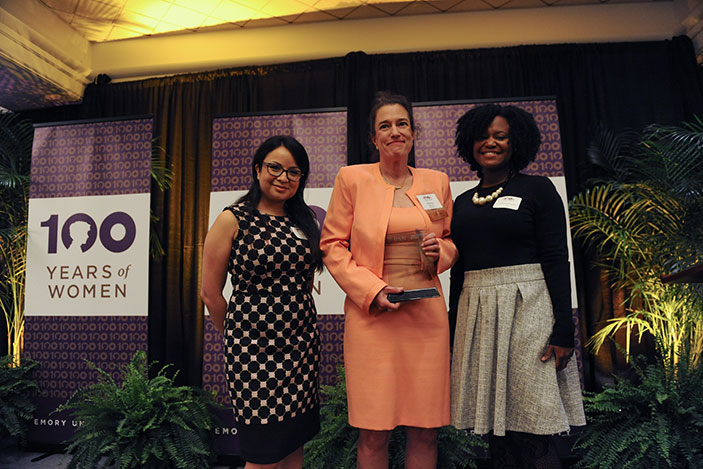 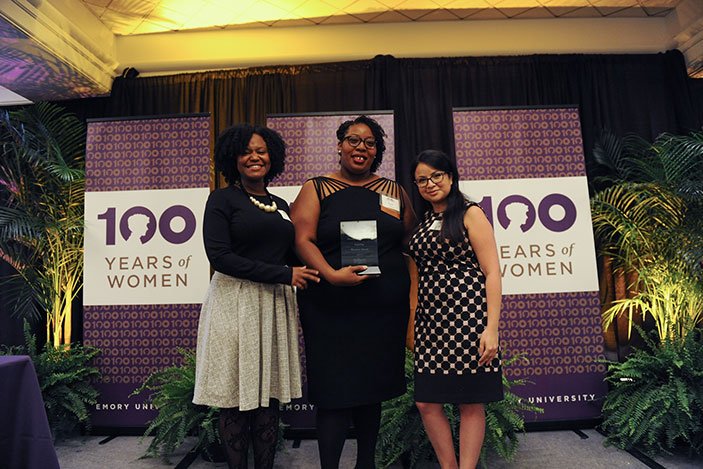 The Unsung Heroine Award went to Wanda Swan, director of the Respect Program in Emory’s Office of Health Promotion. 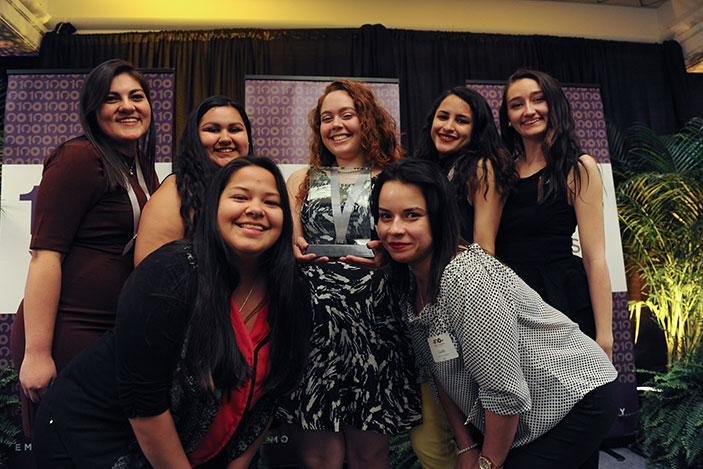 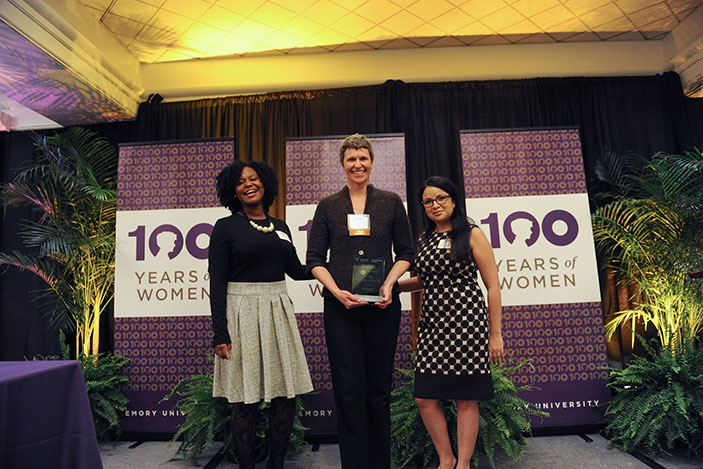 Susan E. Hylen, associate professor of New Testament in Candler School of Theology, received the Award for Excellence in Teaching and Pedagogy. 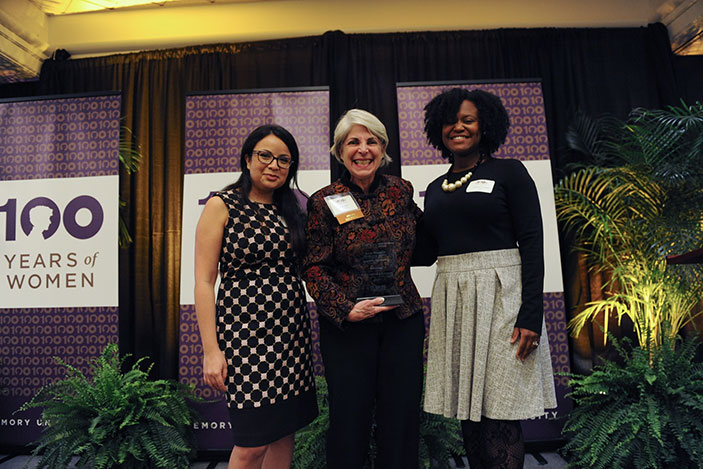 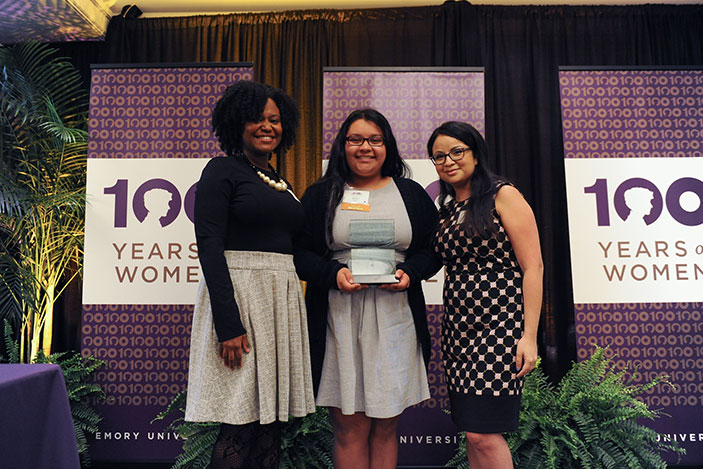 Esther Garcia, a sophomore in Emory College, was honored as Student Leader of the Year. A student staff member at the Center for Women, she launched an initiative called Reunion to create space for Latinx/Hispanic Women. 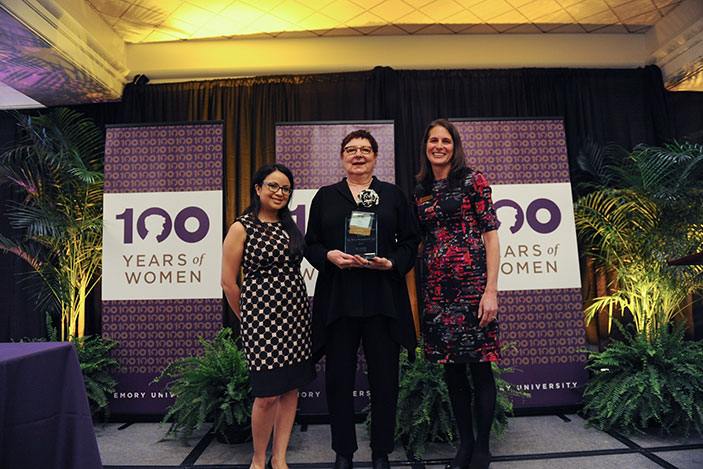 The Outstanding Alumna of the Year Award went to Paula Washington. 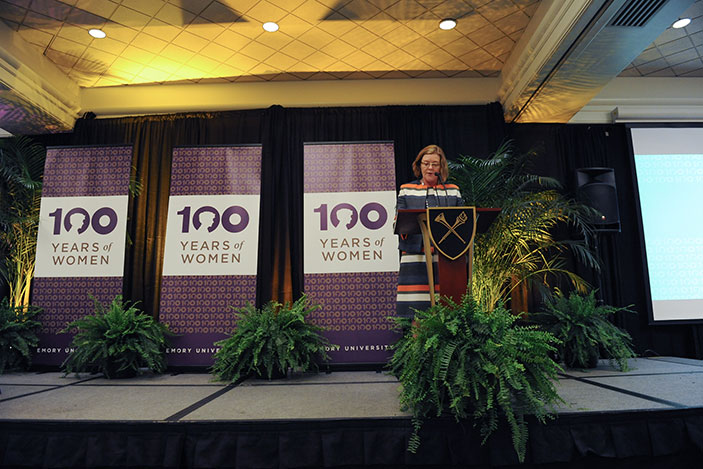 President Claire E. Sterk, Emory's first female president, drew rousing applause and read a poem about 100 years of women on campus: "They have offered the strength and vision to carry Emory / Toward a future worthy of its ideals."

Exceptional women everywhere. Some lit up the big screen; others came onstage to accept awards; many simply exulted in one another’s company at tables in a Cox Hall ballroom filled to capacity.

For those who missed 100 Years of Women of Excellence, held March 18, the key takeaways are joy and pride. Sponsored by the Center for Women at Emory and the Emory Alumni Association, the Women of Excellence event has been a staple of Women’s History Month for the past 20 years — given added impact with this year's centennial of women at Emory.

Appointed to the Georgia Supreme Court by Gov. Zell Miller, she then became the youngest person — and first woman — ever to serve on that court. In July 2005, she was the first woman to serve as chief justice of the Supreme Court of Georgia. She stepped down in 2009 after 27 years of service in the judiciary and is now a partner at Smith, Gambrell & Russell.

At Emory, Chief Sears was elected an alumni trustee in 2010 and a term trustee in 2016. She also is the recipient of the Emory Medal, the university’s highest alumni honor.

Ever energetic, Sears bounded up to the podium and had a clever answer for whoever had asked her to sum up her considerable career in 10 short minutes. Proclaiming “I have never done this before,” she delivered her biography in verse, arranged by decade.

First job… Alston, Miller & Gaines
(before it was Bird)
Only five women lawyers there then
And three blacks
I was the black and the woman.

Her charge had been, she said, “to leave you all excited and inspired,” and the first-time poet did not disappoint.

As she drew to a close, she acknowledged everyone in the audience with the lines, “We’re women who’ve been challenged, but who accepted the call.”

And a new spirit

Before the dinner, a pinning ceremony took place that honored 80 Women of Excellence, all students. This year the awards went to six individuals and a program.

Of particular note was the Berky Abreu Spirit Award, named for — in the words of Chanel Craft, Center for Women assistant director — “a beloved colleague who touched the lives of countless individuals in her 13 years at Emory.”

Abreu, who passed away in 2013, was academic department administrator for the Department of Women’s, Gender and Sexuality Studies. She also served on the President’s Commission on the Status of Women, the Center for Women at Emory Advisory Board and the College Staff Consortium, including a term as chair of the consortium.

“What was truly remarkable about Berky,” noted Craft, “was not only the extent and depth of her commitment and service to the Emory community, but the warmth she brought to the lives of everyone with whom she came into contact, her unparalleled joie de vivre and her unique ability to lift up each and every person who came into her office.”

With members of Abreu’s family on hand and more than a few tears in evidence, Katrina Dickson, professor of classics, accepted the award, which goes to “a woman in the greater Emory community whose presence has fostered the personal and academic growth of students, faculty, staff, and/or departments.”

As one of Dickson’s nominators wrote, “She is an incredible advocate, mentor and cheerleader for so many students on campus — someone who makes sure that every voice in class is heard.”

Other awardees honored during the evening included:

As the evening began, a seven-minute video offered a skillful recounting of women’s 100 years at Emory.

Anne Dunivin, who graduated from Emory College in 1938 and the graduate school in 1940, came to study chemistry. She was “the only girl, but that didn’t bother me," she recalls in the video. At that time, there was but one restroom on campus for women. However, betraying the indomitable spirit for which pioneers are known, she brushed off any inconvenience, saying, “It worked all right. I didn’t have any problems.”

Emory Trustee Teresa Rivero, who earned her three Emory degrees in the 1980s and 1990s, reflected that her biggest obstacle “was finding women mentors.” She did not take classes, for instance, from any female faculty members while a student in the business school. She sees the dawn of a different day with President Claire E. Sterk, Emory’s first female president. “With President Sterk," Rivero says, "I see us forging paths of opportunity and possibility no matter who you are.”

Later in the evening, rousing cheers greeted Sterk when she came to the lectern to read “100 Years of Women of Excellence,” a poem written by Gary Hauk, vice president, senior adviser to the president and university historian.

Starting with Eléonore Raoul, the suffragist and community organizer who deliberately applied for law school admission in 1917 when Chancellor Candler, a foe of coeducation, was away, the poem quickly works its way to the heart of Saturday night’s message about Emory’s women:

Educated in every Emory college and school;
Elevated to every office of teaching, research and service;
Accentuating and marking this place by their individuality—
They have offered the strength and vision to carry Emory
Toward a future worthy of its ideals.