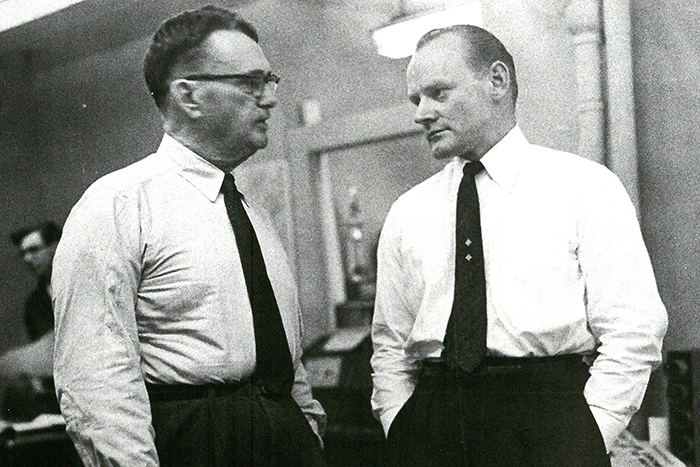 Gene Patterson (right) with Ralph McGill at The Atlanta Constitution in 1960, the year Patterson succeeded McGill as editor. Credit: Image from the Gene Patterson papers, Rose Library at Emory University. 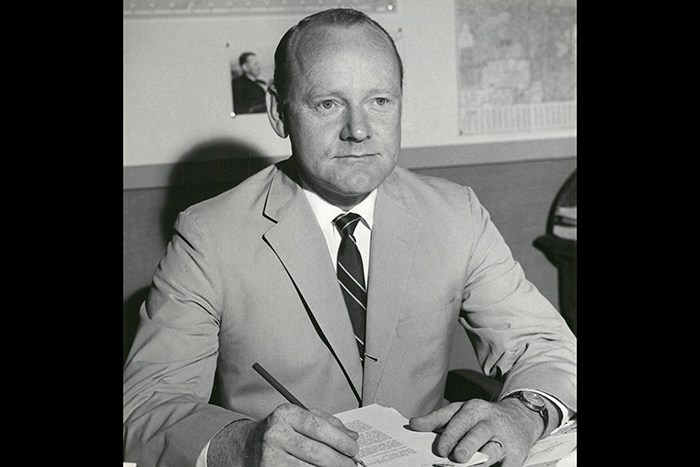 The Stuart A. Rose Manuscript, Archives and Rare Book Library has acquired the papers of the late Eugene Patterson, Pulitzer Prize-winning journalist, editor of the Atlanta Constitution and the Washington Post, and a significant voice for civil rights in the 1960s.

Patterson’s papers include correspondence, photographs, subject files and six large scrapbooks filled with his daily columns. As editor of The Atlanta Constitution, Patterson received widespread national attention for his column “A Flower for the Graves,” about the Birmingham church bombing that killed four young girls on Sept. 15, 1963. The column, published the next day, was so moving that Patterson was invited to read it aloud that night on the CBS Evening News with Walter Cronkite.

This year marks the 50th anniversary of the year Patterson was writing the columns that won him the 1967 Pulitzer Prize for editorial columns.

“This collection covers so many rich moments in history,” says Hank Klibanoff, professor of practice in Emory’s English and creative writing program, who teaches a course on Georgia civil rights cold cases.

Klibanoff, co-author of “The Race Beat: The Press, the Civil Rights Struggle, and the Awakening of a Nation,” interviewed Patterson for his book and was instrumental in bringing the papers to Emory from the Poynter Institute in St. Petersburg, Florida, where Patterson served as board chairman for ten years. “I knew that this had great historical value because he had written about so many dynamic things that I teach,” Klibanoff says.

“It is such an honor to announce the Patterson papers as part of the Rose Library,” says Rosemary M. Magee, director of the Rose Library. “Mr. Patterson’s life, his work and his legacy connect to so many of our collections in the search for deeper understanding of a historical moment, providing insight into our own time. Students and scholars alike will find his journey one of truth and inspiration.”

A few items from Patterson’s papers, including a copy of “A Flower for the Graves” and correspondence he received in response to the piece, will be exhibited in the Rose Library from Nov. 29, 2016 through Jan. 6, 2017.

Gene Patterson (1923-2013) was born and raised in southeast Georgia during the Great Depression. He graduated from the University of Georgia in 1943 with a degree in journalism but joined the Army soon after, serving in the 10th Armored Division under Gen. George Patton in Germany during World War II. He began his journalism career in 1947 in Texas, but returned to Georgia to work for the Macon Telegraph and the United Press, the latter of which moved him around the Southeast, and then to New York City and London.

Patterson came back to Georgia in 1956 as executive editor and columnist for the morning Atlanta Constitution and afternoon Atlanta Journal papers. He became known for his columns in support of the civil rights movement and opposed to the violence against it, winning the Pulitzer Prize for editorial columns in 1967. His 1966 columns that won the Pulitzer focused on a range of subjects, including the ouster of Julian Bond from the Georgia House of Representatives (which Patterson opposed), and the explosive racial conflicts in the Summerhill section of Atlanta. He served as vice-chairman of the U.S. Civil Rights Commission from 1964-1968.

He worked under Constitution editor and well-known Southern journalist Ralph McGill, from whom Patterson took over the editor position in 1960 when McGill became publisher, and the two were close friends.

Klibanoff says both men were of “great minds, progressive hearts and courageous souls,” adding that they lived near each other, worked on the same floor at the newspaper offices, and “spent many hours and millions of words in spirited conversation with each other.”

Patterson left the Atlanta Constitution in 1968 to become managing editor of the Washington Post during the time of the Vietnam War; he was instrumental in the Post’s decision to publish the Pentagon Papers. In 1972, he became editor of the St. Petersburg Times (now the Tampa Bay Times), run by Nelson Poynter. He followed Poynter as CEO and chairman of the board of the Times Publishing Co. before retiring in 1988. He died in 2013 at age 89.

More about the collection

Among the materials in the Patterson papers are letters from readers. “For scholars, this is a fascinating window on a particular time in history,” says Randy Gue, Rose Library curator of modern political and historical collections. “Researchers often have a hard time finding that person-on-the-street perspective. These are reactions from people who were living in that time, who read Patterson’s columns and wrote to him with their opinions.”

“The Rose Library has a remarkable collection of Southern journalists who were working in the 1960s and ’70s, writing about volatile issues like race relations, the economy and political power,” Gue says. “Each collection is valuable individually, but together there is a value to students and researchers that you can’t find anywhere else.”

The correspondence among Patterson and the other journalists is a glimpse into the effects that covering such stories had on these writers, Gue adds.

“They’re all incredible writers, and the letters are hilarious, beautifully written and engaging,” Gue says. “You get a real sense of camaraderie from reading them.”